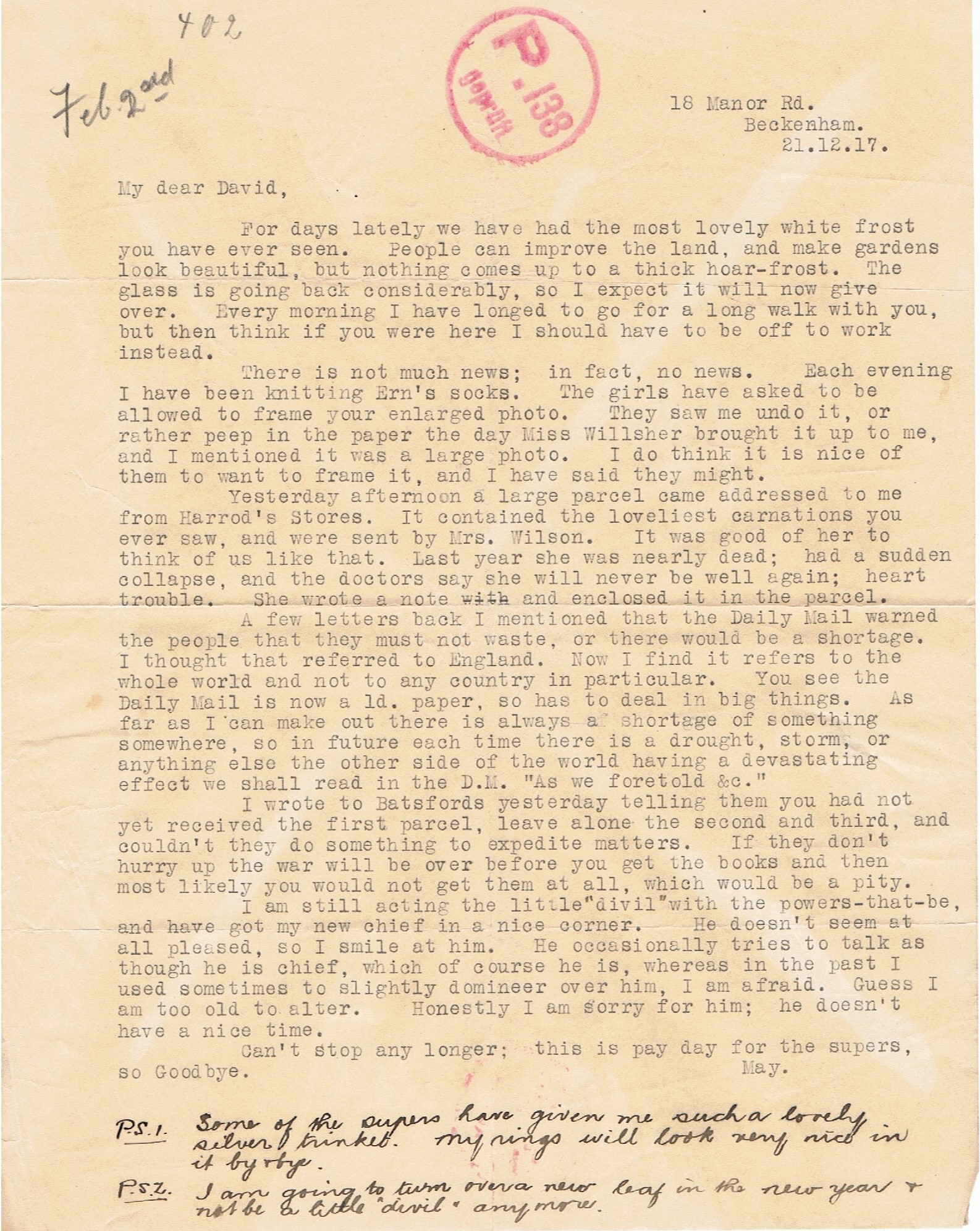 May to David Beckenham 21.12.17
My dear David,
For days lately we have had the most lovely white frost you have ever seen. People can improve the land, and make gardens look beautiful, but nothing comes up to a thick hoar-frost. The glass is going back considerable, so I expect it will now give over. Every morning I have longed to go for a long walk with you, but then think if you were here I should have to be off to work instead.
There is not much news; in fact, no news. Each evening I have been knitting Ern’s socks. The girls have asked to frame your enlarged photo. They saw me undo it, or rather peep in the paper the day Miss Willsher brought it up to me, and I mentioned it was a large photo. I do think it is nice of them to want to frame it, and I have said they might.
Yesterday afternoon a large parcel came addressed to me from Harrod’s Stores. It contained the loveliest carnations you ever saw, and were sent by Mrs Wilson. It was good of her to think of us like that. Last year she was nearly dead; had a sudden collapse, and the doctors say she will never be quite well again; heart trouble. She wrote a note and enclosed it in the parcel.
A few letters back I mentioned that the Daily Mail warned people that they must not waste, or there would be a shortage. I thought that referred to England. Now I find it refers to the whole world and not to any country in particular. You see the Daily Mail is now a 1d. Paper, so has to deal in big things. As far as I can make out there is always a shortage of something somewhere, so in future each time there is a drought, storm, or anything else the other side of the world having a devastating effect we shall read in the D.M. “As we foretold etc.”
I wrote to Batsford yesterday telling them you had not yet received the first parcel, leave alone the second or third, and couldn’t they do something to expedite matters. If they don’t hurry up the war will be over before you get the books and then most likely you would not get them at all, which would be a pity.
I am still acting the little ‘divil’ with the powers-that-be, and have got my new chief in a nice corner. He doesn’t seem at all pleased, so I smile at him. He occasionally tries to talk as though he is chief, which of course he is, whereas in the past I used to sometimes to slightly domineer over him, I am afraid. Guess I am too old to alter. Honestly I am sorry for him; he doesn’t have a nice time.
Can’t stop any longer; this is pay day for the supers, so Goodbye.
May
P.S.1. Some of the supers have given me such a lovely silver trinket. My rings will very nice in it by and bye.
P.S.2. I am going to turn over a new leaf in the new year and not be such a little ‘divil’ anymore.