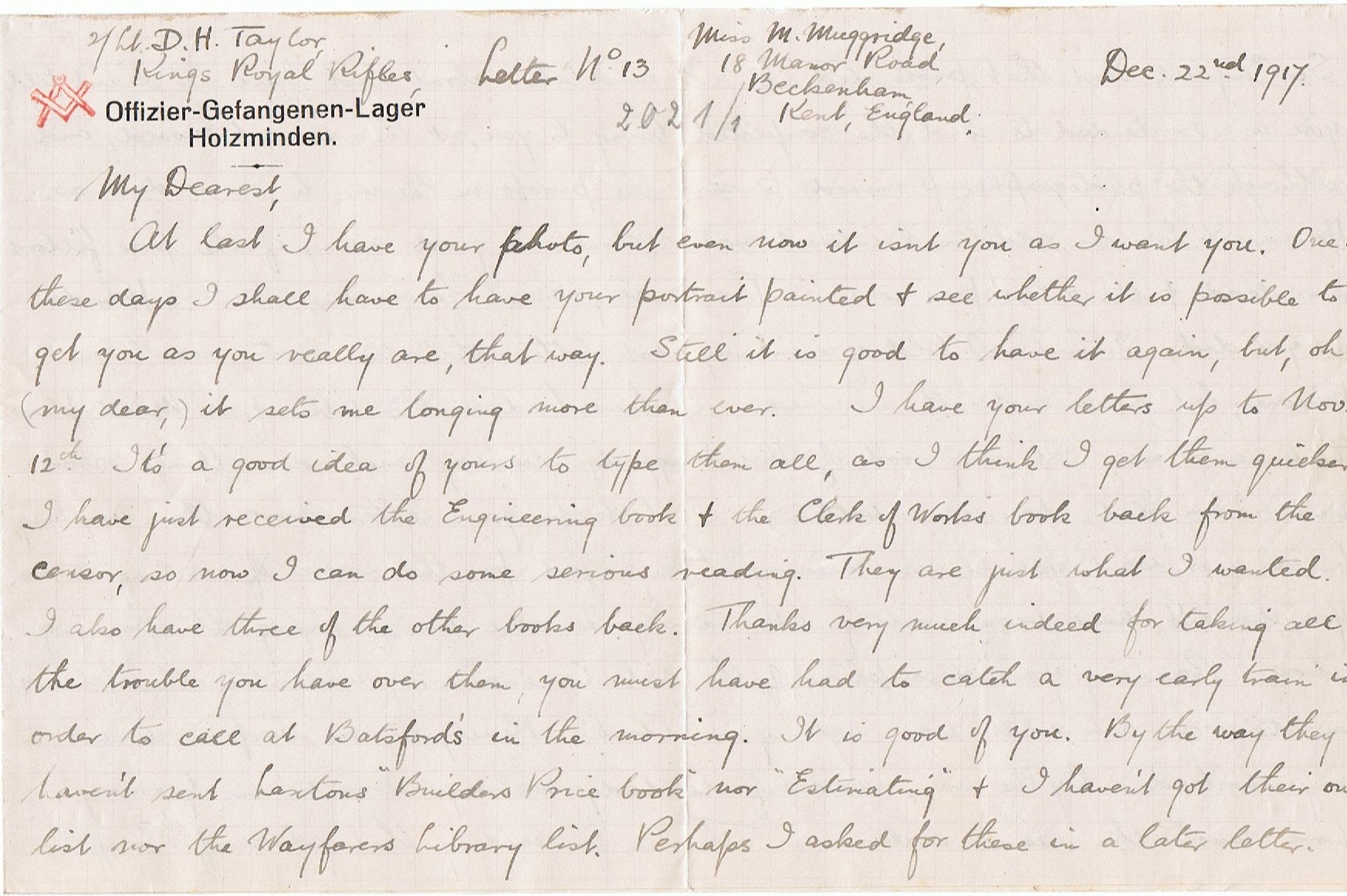 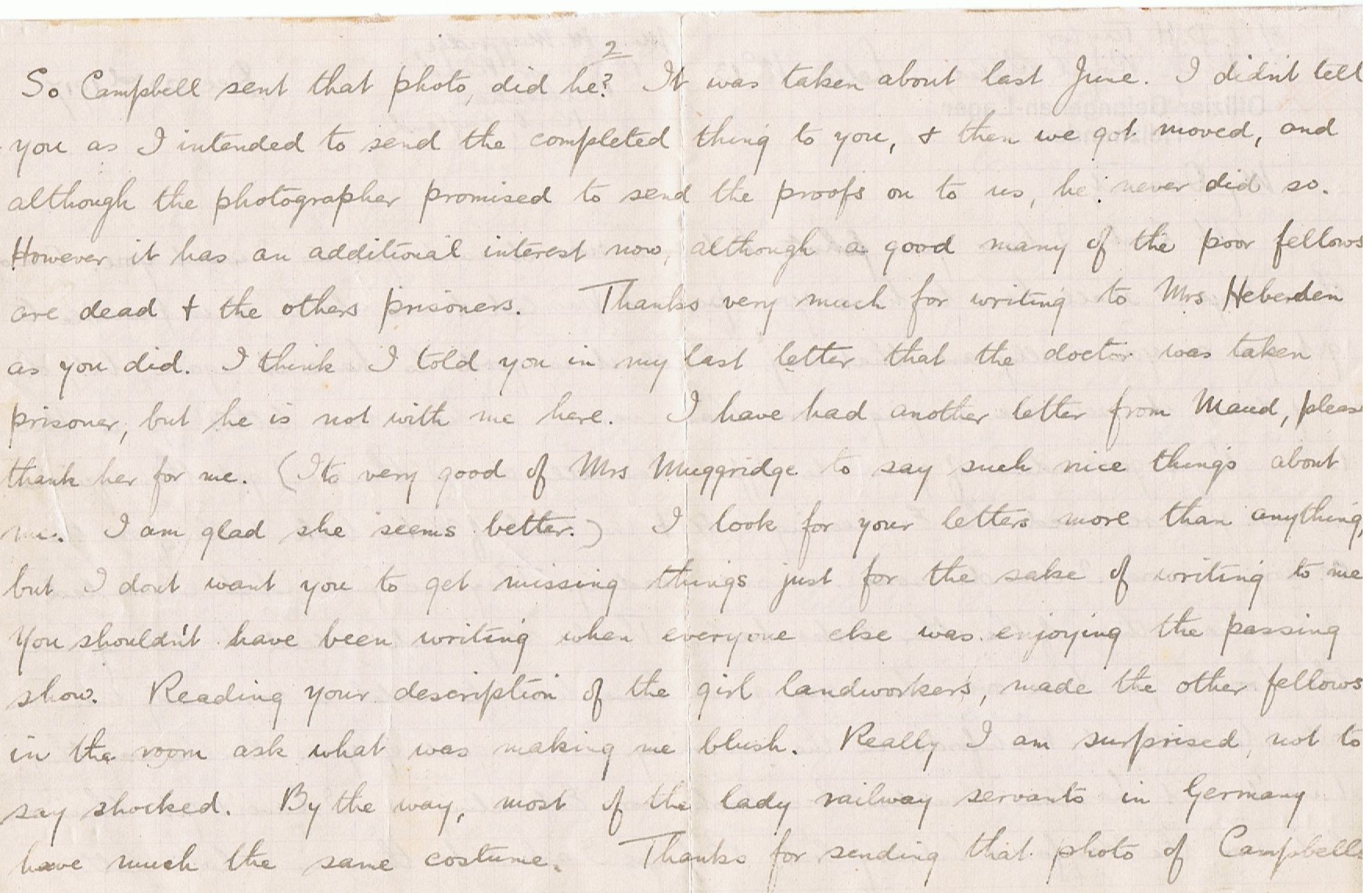 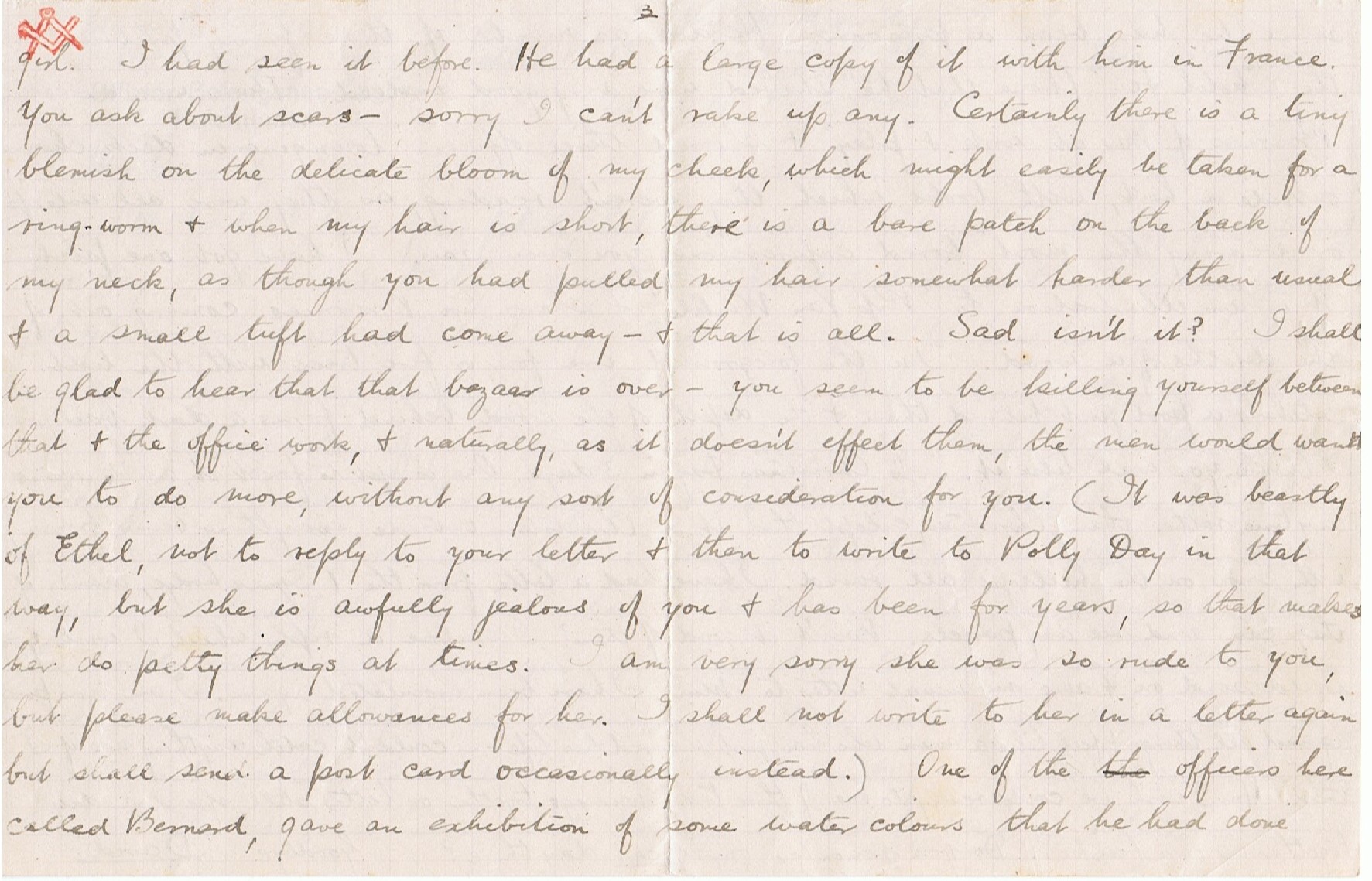 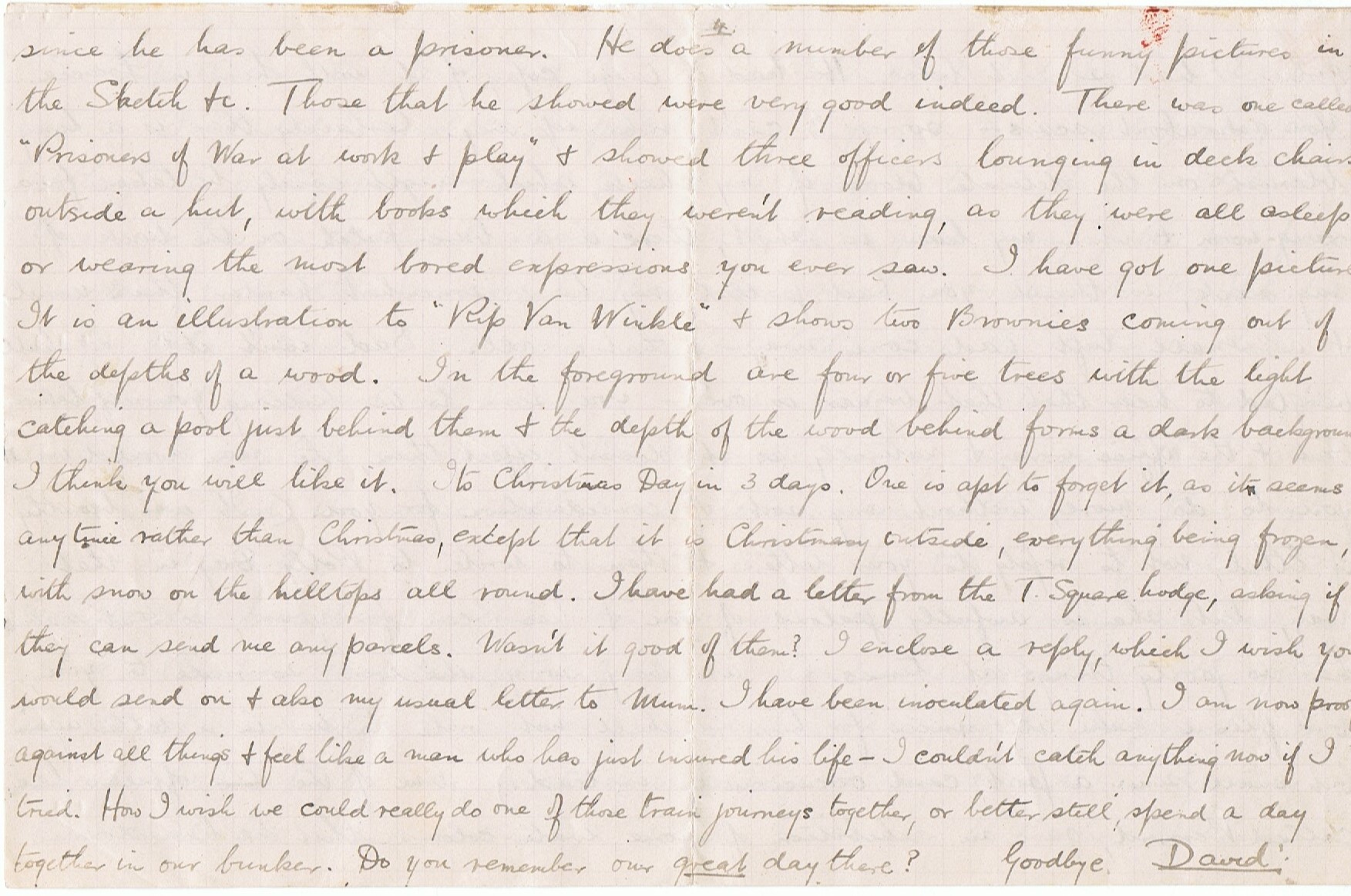 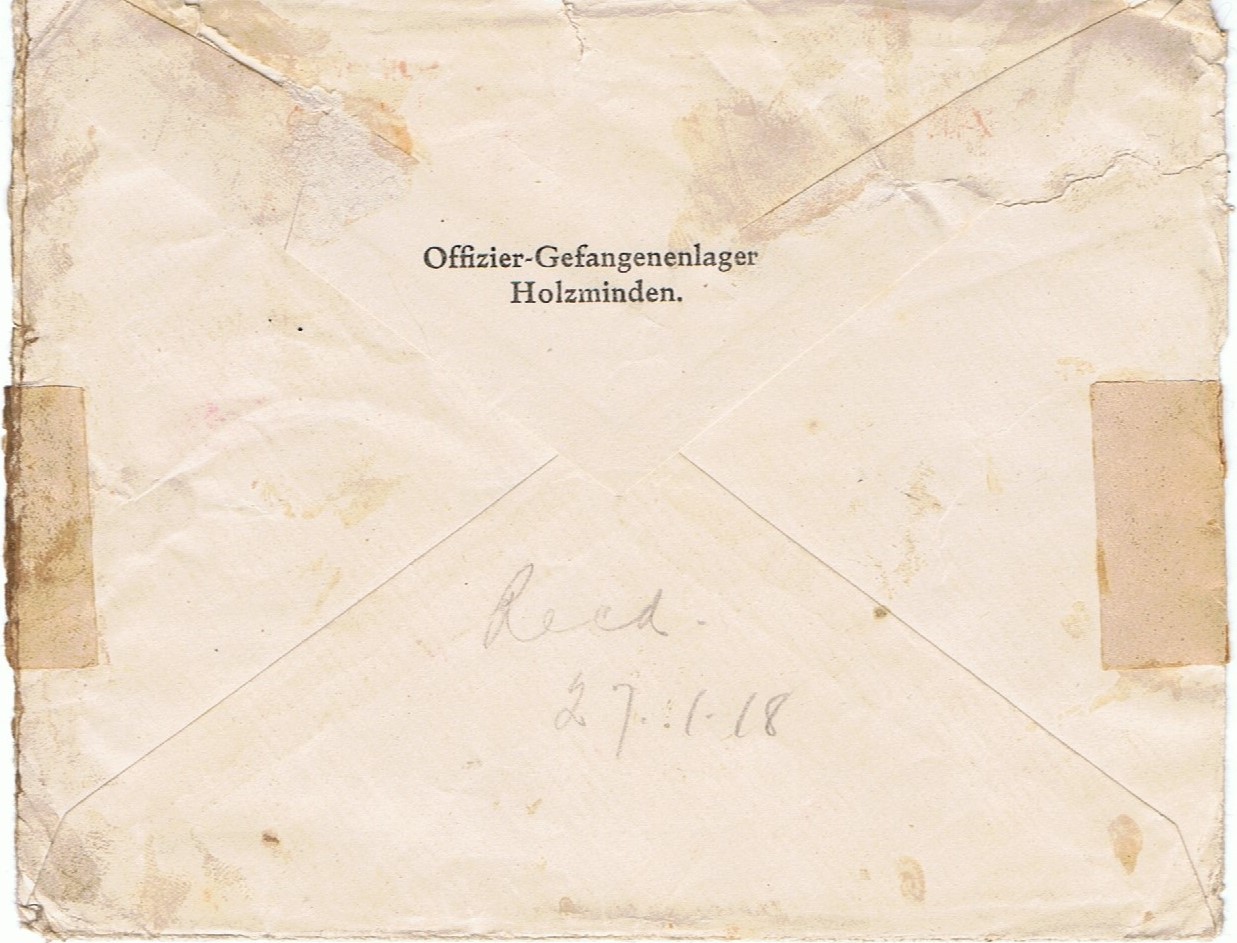 David to May HOLZMINDEN December 22nd 1917 Letter No.13
My Dearest,
At last I have your photo, but even now it isn’t you as I want you. One of these days I shall have to have your portrait painted and see whether it is possible to get you as you really are, that way. Still it is good to have it again, but, oh my dear, it sets me longing more than ever. I have your letters up to November 12th. It’s a good idea of yours to type them all, as I think I get them quicker.
I have just received the Engineering book and the Clerk of Works book back from the censor, so now I can do some serious reading. They are just what I wanted, I also have three of the other books back. Thanks very much indeed for taking all the trouble you have over them, you must have had to catch a very early train in order to call at Batsfords in the morning. It is good of you. By the way they haven’t sent Laxtons “Builders Price Book” nor “Estimating” and I haven’t got their own list nor the Wayfarers Library list. Perhaps I asked for these in a later letter.
So Campbell sent that photo did he? It was taken about last June. I didn’t tell you as I intended to send the completed thing to you, and then we got moved, and although the photographer promised to send the proofs on to us, he never did so. However it has an additional interest now although a good many of the poor fellows are dead and the others prisoners.
Thanks very much for writing to Mrs. Heberden as you did. I think I told you in my last letter that the doctor was taken prisoner, but he is not with me here.
I have had another letter from Maud, please thank her for me. (Its very good of Mrs.Muggridge to say such nice things about me. I am glad she seems better.)
I look for your letters more than anything, but I don’t want you to get missing things just for the sake of writing to me. You shouldn’t have been writing when everyone else was enjoying the passing show. Reading your description of the girl land-workers, made the other fellows in the room ask what was making me blush. Really I am surprised, not to say shocked. By the way, most of the lady railway servants in Germany have much the same costume.
Thanks for sending that photo of Campbell’s girl. I had seen it before. He had a large copy of it with him in France.
You ask about scars – sorry I can’t rake up any. Certainly there is a tiny blemish on the delicate bloom of my cheek, which might easily be taken for a ring-worm and when my hair is short, there is a bare patch on the back of my neck, as though you had pulled my hair somewhat harder than usual, and a small tuft had come away – and that is all. Sad isn’t it?
I shall be glad to hear that that bazaar is over – you seem to be killing yourself between that and the office work, and naturally, as it doesn’t effect them, the men would want you to do more, without any sort of consideration for you. (It was beastly of Ethel, not to reply to your letter and then to write to Polly Day in that way, but she is awfully jealous of you and has been for years, so that makes her do petty things at times. I am very sorry she was so rude to you, but please make allowances for her, I shall not write to her in a letter again but shall send a post card occasionally instead.)
One of the officers here called Bernard, gave an exhibition of some water colours that he had done since he has been a prisoner. He does a number of those funny pictures in the Sketch etc, those that he showed were very good indeed. There was one called “Prisoners of War at work and play” and showed three officers lounging in deck chairs outside a hut, with books which they weren’t reading, as they were all asleep or wearing the most bored expressions you ever saw. I have got one picture. It is an illustration to “Rip Van Winkle” and shows two Brownies coming out of the depths of a wood. In the foreground are four or five trees with the light catching a pool just behind them and the depth of the wood behind forms a dark background. I think you will like it.
Its Christmas Day in 3 days. One is apt to forget it, as it seems any time rather than Christmas, except that it is Christmasy outside, everything being frozen, with snow on the hilltops all round. I have had a letter from the T. Square Lodge, asking if they can send me any parcels. Wasn’t it good of them? I enclose a reply, which I wish you would send on and also my usual letter to Mum. I have been inoculated again. I am now proof against all things and feel like a man who has just insured his life – I couldn’t catch anything now if I tried.
How I wish we could really do one of those train journeys together, or better still, spend a day together in our bunker. Do you remember our great day there?
Goodbye.
David