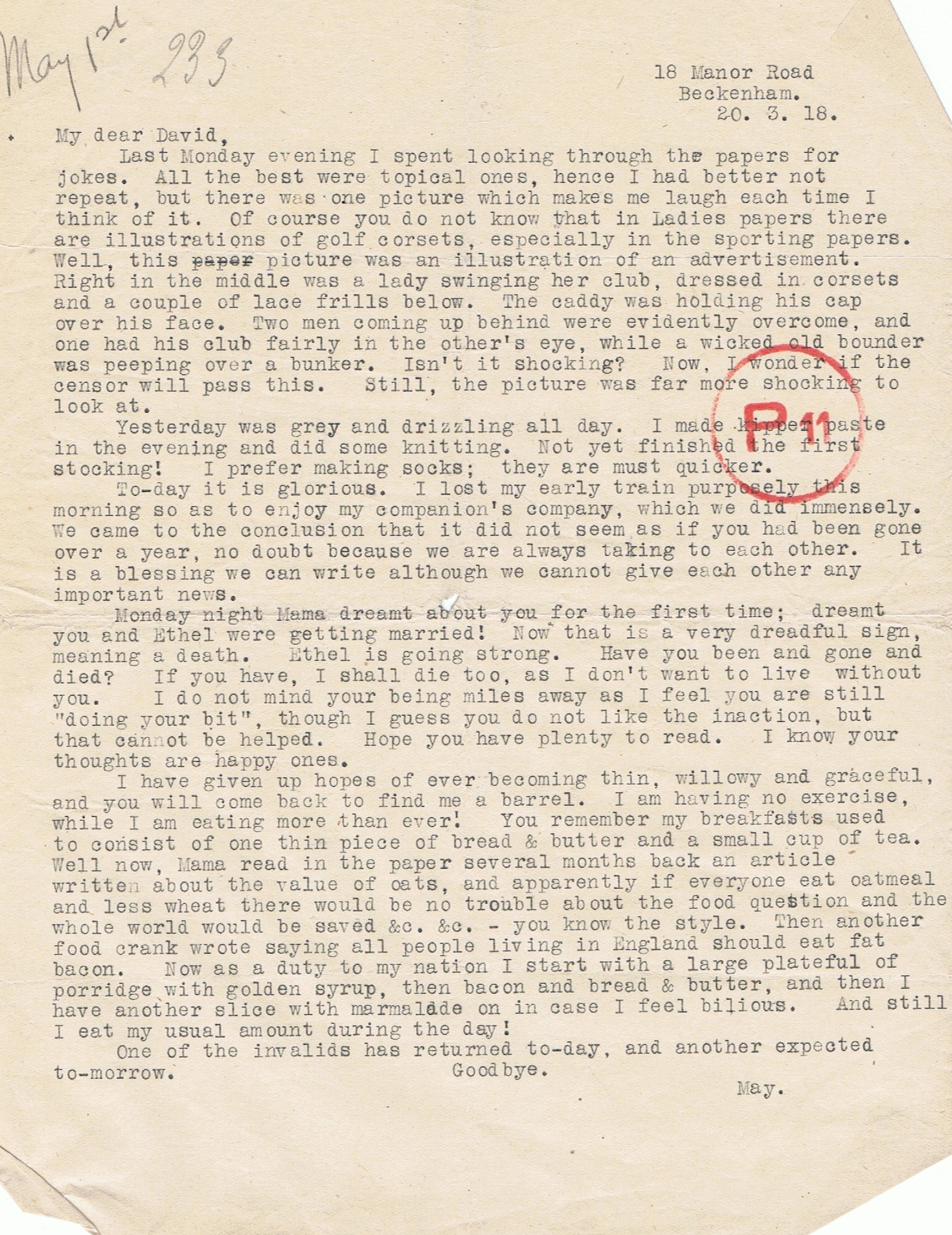 May to David 20.3.18
My dear David,
Last Monday evening I spent looking through the papers for jokes. All the best were topical ones, hence I had better not repeat, but there was one picture which makes me laugh each time I think of it. Of course you do not know that in Ladies papers there are illustrations of golf corsets, especially in the sporting papers. Well, this picture was an illustration of an advertisement. Right in the middle was a lady swinging her club, dressed in corsets and a couple of lace frills below. The caddy was holding his cap over his face. Two men coming up behind were evidently overcome, and one had his club fairly in the other’s eye, while a wicked old bounder was peeping over a bunker. Isn’t it shocking? Now, I wonder if the censor will pass this. Still, the picture was far more shocking to look at.
Yesterday was grey and drizzling all day. I made kipper paste in the evening and did some knitting. Not yet finished the first stocking! I prefer making socks; they are much quicker.
Today it is glorious. I lost my early train purposely this morning so as to enjoy my companion’s company, which we did immensely. We came to the conclusion that it did not seem as if you had been gone over a year, no doubt because we are always talking to each other. It is a blessing we can write although we cannot give each other any important news.
Monday night Mama dreamt about you for the first time; dreamt you and Ethel were getting married! Now that is a very dreadful sign, meaning a death. Ethel is going strong. Have you been and gone and died? If you have, I shall die too, as I don’t want to live without you. I do not mind your being miles away as I feel you are still “doing your bit”, though I guess you do not like the inaction, but that cannot be helped. Hope you have plenty to read. I know your thoughts are happy ones.
I have given up hopes of ever becoming thin, willowy and graceful, and you will come back to find me a barrel. I am having no exercise, while I am eating more than ever! You remember my breakfasts used to consist of one thin piece of bread & butter and a small cup of tea. Well now, Mama read in the paper several months back an article written about the value of oats, and apparently if everyone eat oatmeal and less wheat there would be no trouble about the food question and the whole world would be saved etc etc – you know the style. Then another food crank wrote saying all people living in England should eat fat bacon. Now as a duty to my nation I start with a large plateful of porridge with golden syrup, then bacon and bread & butter, and then I have another slice with marmalade on in case I feel bilious. And still I eat my usual amount during the day!
One of the invalids has returned today, and another expected tomorrow.
Goodbye.
May