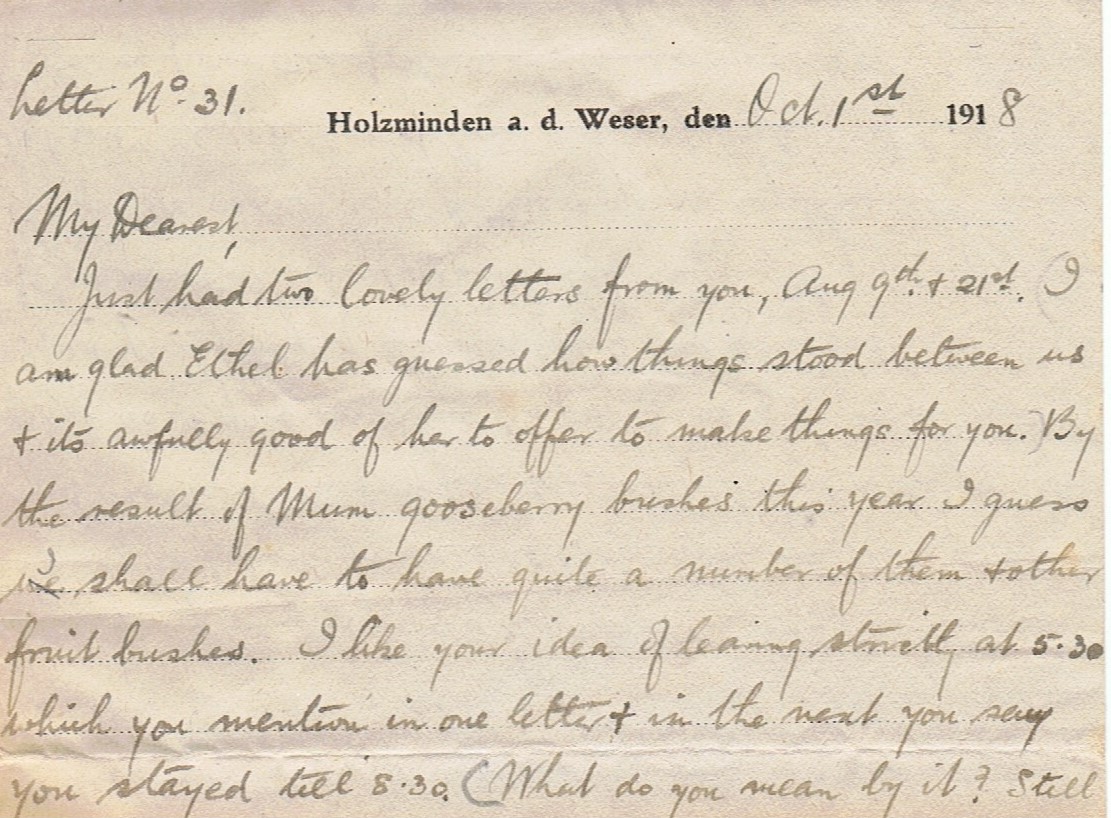 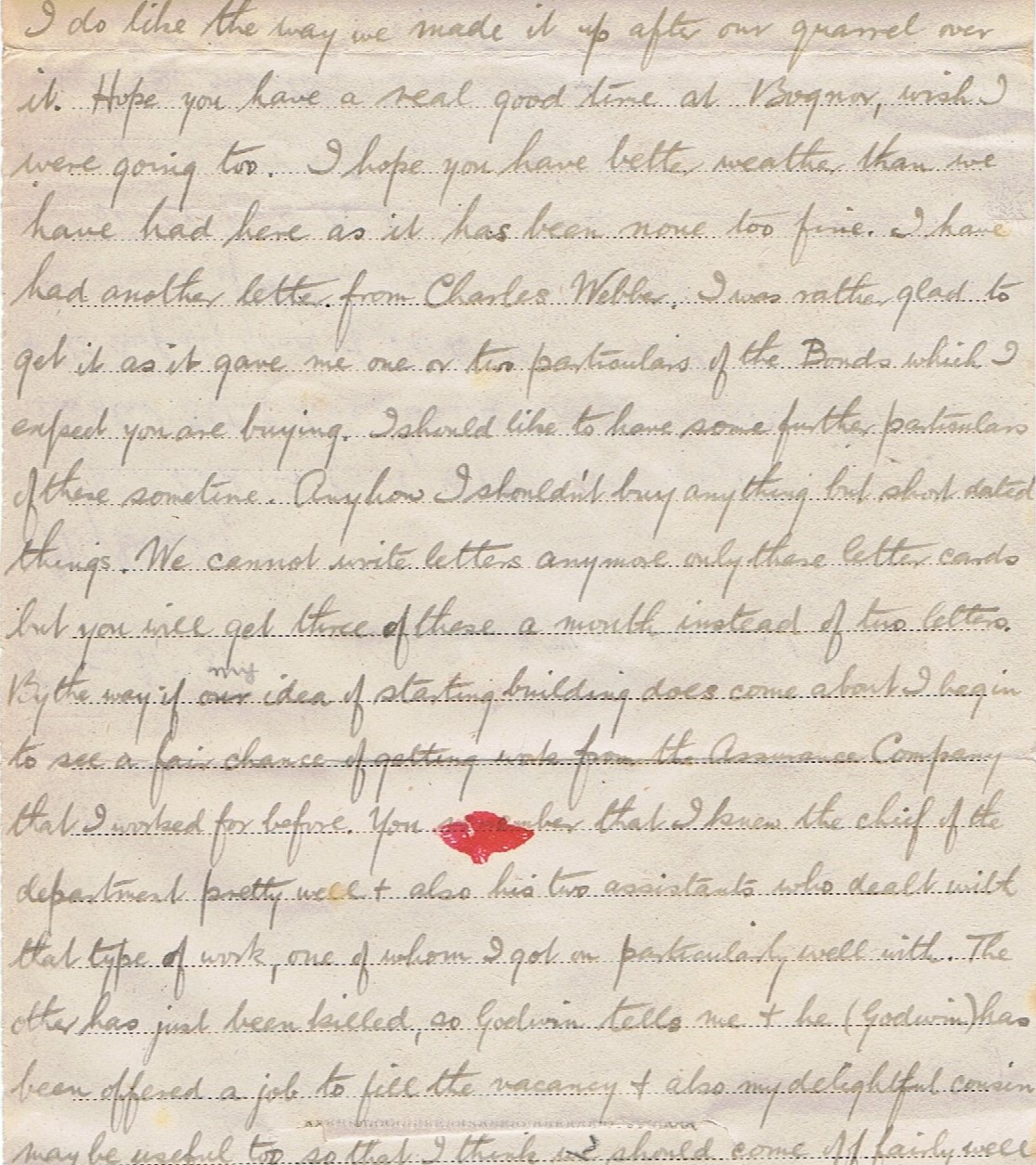 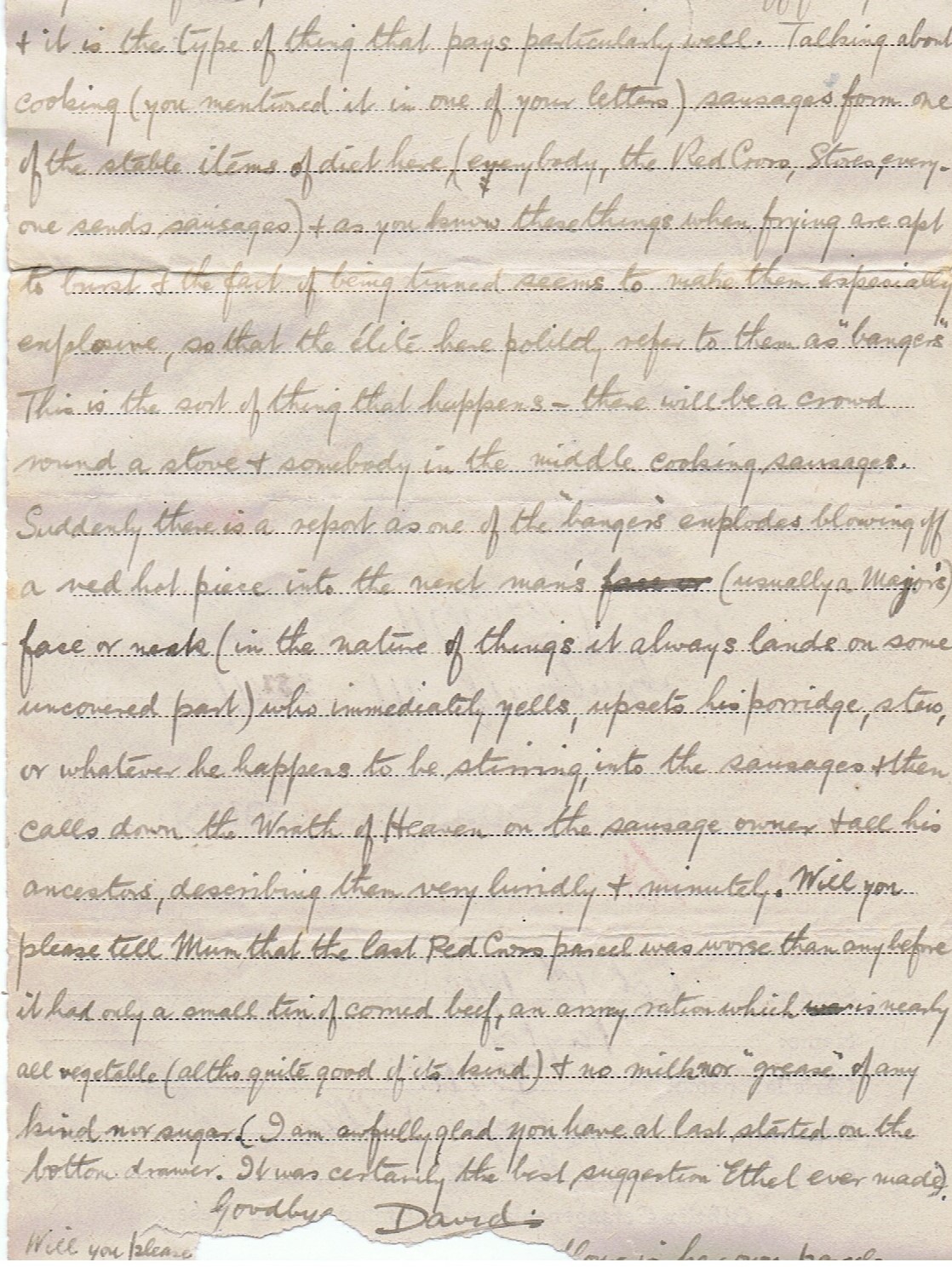 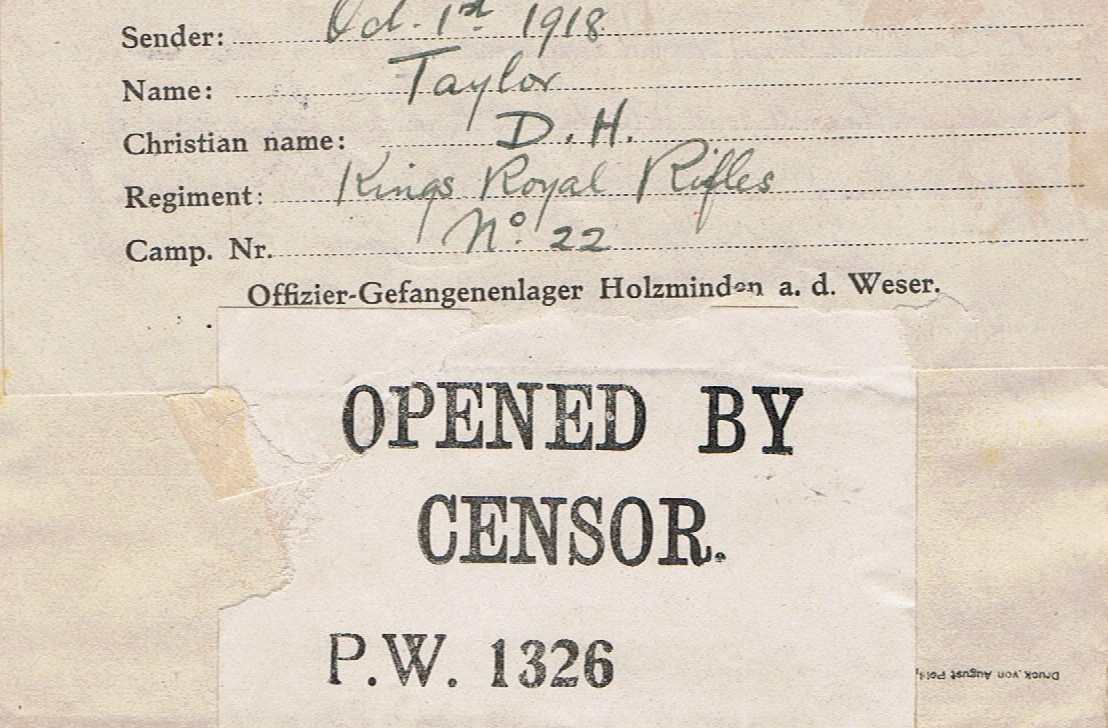 David to May Holzminden Letter No 31 Oct 1st 1918
My Dearest,
Just had two lovely letters from you, Aug 9th & 21st. I am glad Ethel has guessed how things stood between us & its awfully good of her to offer to make things for you. By the result of Mum’ gooseberry bushes this year I guess I shall have to have quite a number of them & other fruit bushes. I like your idea of leaving strictly at 5.30 which you mention in one letter & in the next you say you stayed till 8.30. What do you mean by it? Still I do like the way we made it up after our quarrel over it. Hope you have a real good time at Bognor, wish I were going too. I hope you have better weather than we have had here as it has been none too fine. I have had another letter from Charles Webber. I was rather glad to get it as it gave me one or two particulars of the Bonds which I expect you are buying. I should like to have some further particulars of these sometime. Anyhow I shouldn’t buy anything but short dated things. We cannot write letters anymore only these letter cards but you will get three of these a month instead of two letters. By the way if my idea of starting building does come about I begin to see a fair chance of getting work from the Assurance Company that I worked for before. You remember that I knew the chief of the department pretty well & also his two assistants who dealt with that type of work, one of whom I got on particularly well with. The other has just been killed, so Godwin tells me & he (Godwin) has been offered a job to fill the vacancy & also my delightful cousin maybe useful too, so that I think I should come off fairly well & it is the type of thing that pays particularly well. Talking about cooking (you mentioned it in one of your letters) sausages form one of the stable items of diet here (everybody, the Red Cross, Stores, everyone sends sausages) & as you know these things when frying are apt to burst & the fact of them being tinned seems to make them especially explosive, so that the elite here politely refer to them as “bangers”. This is the sort of thing that happens – there will be a crowd round a stove & somebody in the middle cooking sausages. Suddenly there is a report as one of the “bangers” explodes blowing off a red hot piece into the next man’s (usually a Major’s) face or neck (in the nature of things it always lands on some uncovered part) who immediately yells, upsets his porridge, stew, or whatever he happens to be stirring, into the sausages & then calls down the Wrath of Heaven on the sausage owner & all his ancestors, describing them luridly & minutely. Will you please tell Mum that the last Red Cross parcel was worse than any before it had only a small tin of corned beef, an army ration which is nearly all vegetable (although quite good of its kind) & no milk nor “grease” of any kind nor sugar. (I am awfully glad you have at last started on the bottom drawer. It was certainly the best suggestion Ethel ever made).
Goodbye
David
Will you please ask Mum to include some flour in her own parcels.