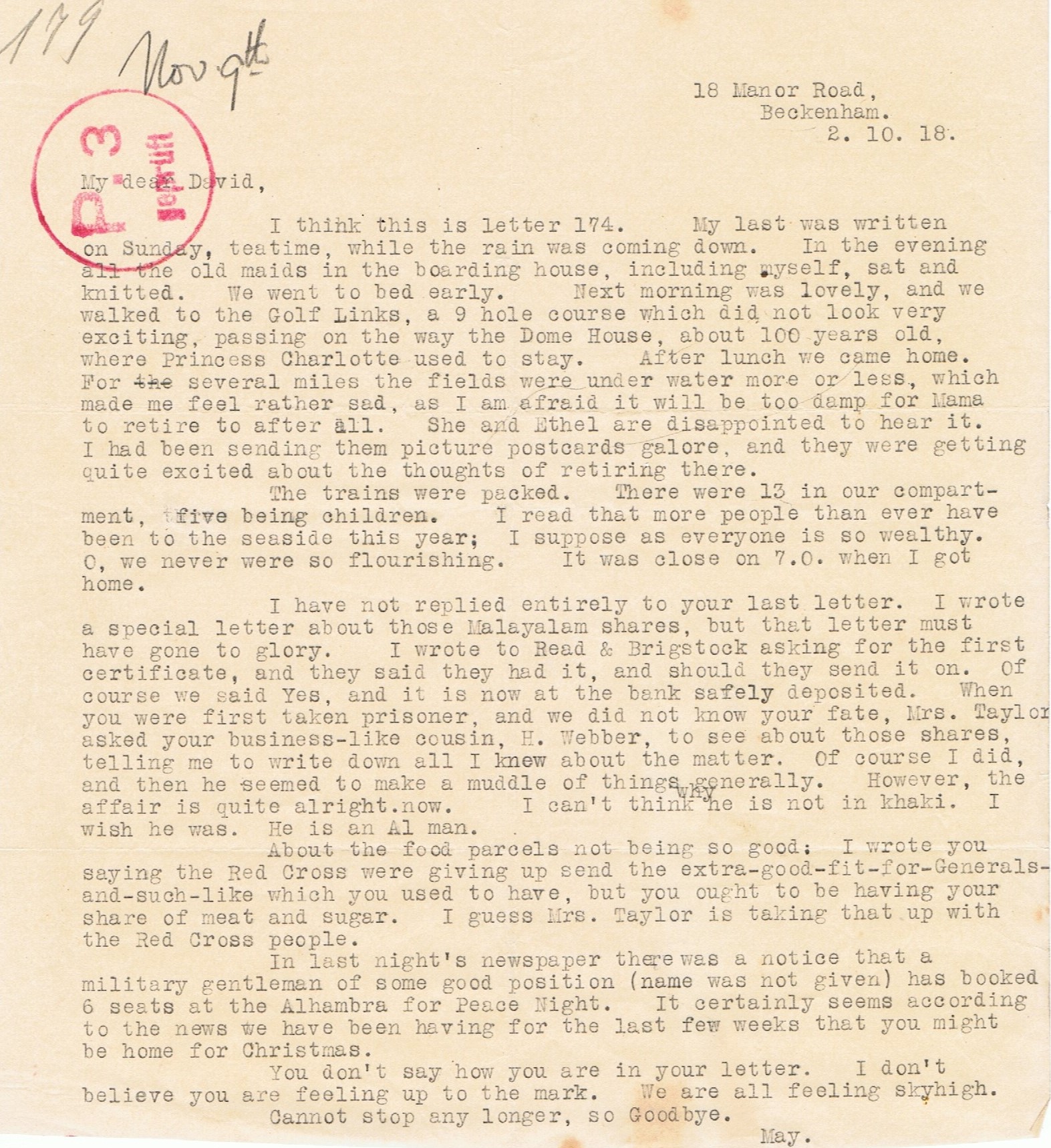 I think this is letter 174. My last was written on Sunday, teatime, while the rain was coming down. In the evening all the old maids in the boarding house, including myself, sat and knitted. We went to bed early. Next morning was lovely, and we walked to the Golf Links, a 9 hole course which did not look very exciting, passing on the way the Dome House, about 100 years old, where Princess Charlotte used to stay. After lunch we came home. For several miles the fields were under water more or less, which made me feel rather sad, as I am afraid it will be too damp for Mama to retire to after all. She and Ethel are disappointed to hear it. I had been sending them picture postcards galore, and they were getting quite excited about the thoughts of retiring there.

The trains were packed. There were 13 in our compartment, five being children. I read that more people than ever have been to the seaside this year; I suppose as everyone is so wealthy. O, we were never so flourishing. It was close on 7.0 when I got home.

I have not relpied entirely to your last letter. I wrote a special letter about those Malayalam shares, but that letter must have gone to glory. I wrote to Read & Brigstock asking for the first certificate, and they said they had it, and should they send it on. Of course we said Yes, and it is now at the bank safely deposited. When you were first taken prisoner, and we did not know your fate, Mrs Taylor asked your business-like cousin, H Webber, to see about those shares, telling me to write down all I knew about the matter. Of course I did, and then he seemed to make a muddle of things generally. However, the affair is quite alright now. I can’t think why he is not in khaki. I wish he was. He is an A1 man.

About those food parcels not being so good: I wrote you saying the Red Cross were giving up send the extra-goo-fit-for-Generals-and-such-like which you used to have, but you ought to be having your share of meat and sugar. I guess Mrs Taylor is taking that up with the Red Cross people.

In last night’s newspaper there was a notice that a military gentleman of some good position (name was not given) has booked 6 seats at the Alhambra for Peace Night. It certainly seems according to the news we have been having for the last few weeks that you might be home for Christmas.

You don’t say how you are in your letter. I don’t believe you are feeling up to the mark. We are all feeling sky high.

Cannot stop any longer, so Goodbye.