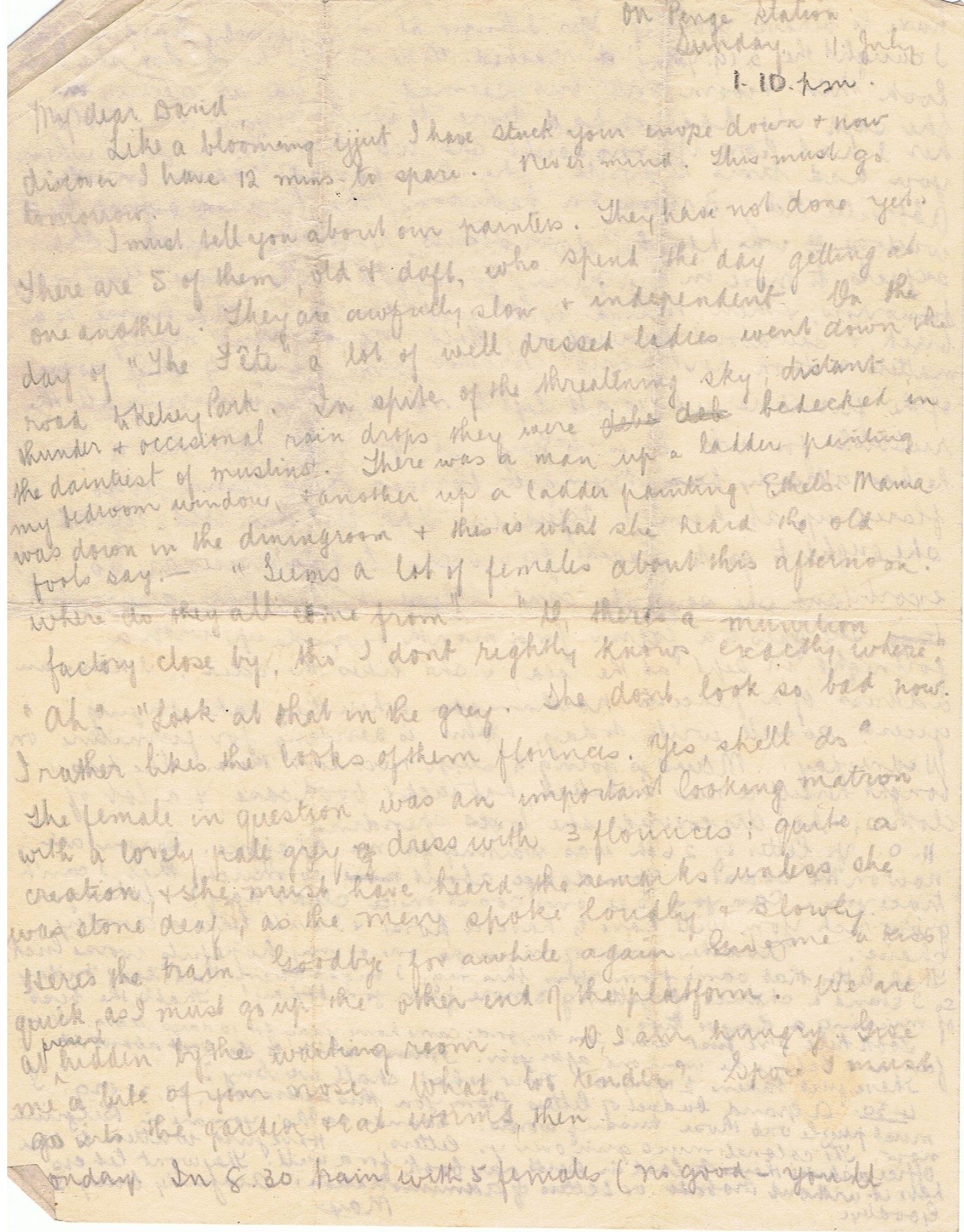 Like a blooming ejjut I stuck your envelope down and now discover I have 12 mins to spare. Never mind. This must go tomorrow.

I must tell you about our painters. They have not done yet. There are 5 of them, old and daft, who spend the day getting at one another. They are awfully slow and independent. On the day of “The Fete” a lot of well dressed ladies went down the road to Kelsey Park. In spite of the threatening sky, distant thunder and occasional rain drops they were bedecked in the daintiest of muslins. There was a man up a ladder painting my bedroom window and another up a ladder painting Ethel’s. Mama was down in the diningroom and this is what she heard the old fools say: “Seems a lot of females about this afternoon. Where do they all come from.” “O, there’s a munition factory close by, tho’ I don’t rightly knows exactly where.” “Ah.” “Look at that in the grey. She don’t look so bad now. I rather likes the looks of them flounces. Yes, she’ll do.” The female in question was an important looking matron with a lovely pale grey dress with 3 flounces; quite a creation, and she must have heard the remarks unless she was stone deaf, as the men spoke loudly and slowly.

Here’s the train. Goodbye for awile again. Give me a kiss quick as I must go up the other end of the platform. We are at present hidden by the waiting room. O I am hungry. Give me a bite of your nose. What, too tender? Spose I must go into the garden and eat worms then.

Monday. In 8.30 train with 5 females (no good – you’ll have to behave yourself. Yes I know it is extremely hard on you. I caught the 3.19 yesterday and reached Maud’s at 4.0. Lor, she does look thin and worn out but seemed excited at seeing me. She said she had not had time to write to you, so I told her I had done it and no doubt she would hear from you when you had time to write. She has found room in the Abberville Rd, 3 rooms and a bathroom, the house is owned by a widow who has the downstairs, rent 10/6 a week. She expects to move in by Friday fortnight. The nurse leaves tomorrow and then Maud will feel lonely. This nurse is a brick and saw about funeral etc, told Maud about money matters and took her rooms. Brother John wants to buy some furniture, which is all left to Maud, and he is having all the rubbish for which he is paying £6.10/- not cash down as he has already been trying to borrow from Maud, who flared up at him and refused. The Dr has told Maud she ought to go to seaside for 6 weeks but as prices are so exorbitant she says she can’t afford it. I have suggested she goes to a farm for a month, and winds up with a fortnight in Sept at the sea, and she likes the idea. I have an address of a place in Northampton where they take paying guests so will write today. John is sending for furniture on Wednesday. Maud is going to sleep next door then. She has bought herself a new bedstead, hat rack and bookcase and a lot of clothes, and has discovered she loves spending.

11.0 Your letter of 26th was waiting for me at office. So you are now on the coast. You dodge about so much that I can’t trace you. Can you see our coast on a clear day? When you grow rich you will have to have a horse and I will have a donkey chaise. Another case of mumps, one of my hopefuls worse luck. That letter that came from you this mg: I ought to have had that last Friday so I stand a chance of getting 3 more from you today! That’s the best of missing a day or two.

Look here, I’ve just seen Tom Gayford; came home yesterday for 10 days leave. It isn’t fair, as I believe he went out after you. I must write to the Govt about it.

4.30 A grand budget of letters from you this afternoon, 27,28 & 29. I must puzzle out those missing words. Sounds as tho’ you are in Belgium now. The colonel must grin over yr letters. Have just written to War Office asking them to look in Bert’s paybook for a will. They won’t let us have it without probate or Letters of Administration. Awfully busy so Goodbye