1st July 1917 am Geraniums in the Cemetery

1st July 1917 am Geraniums in the Cemetery 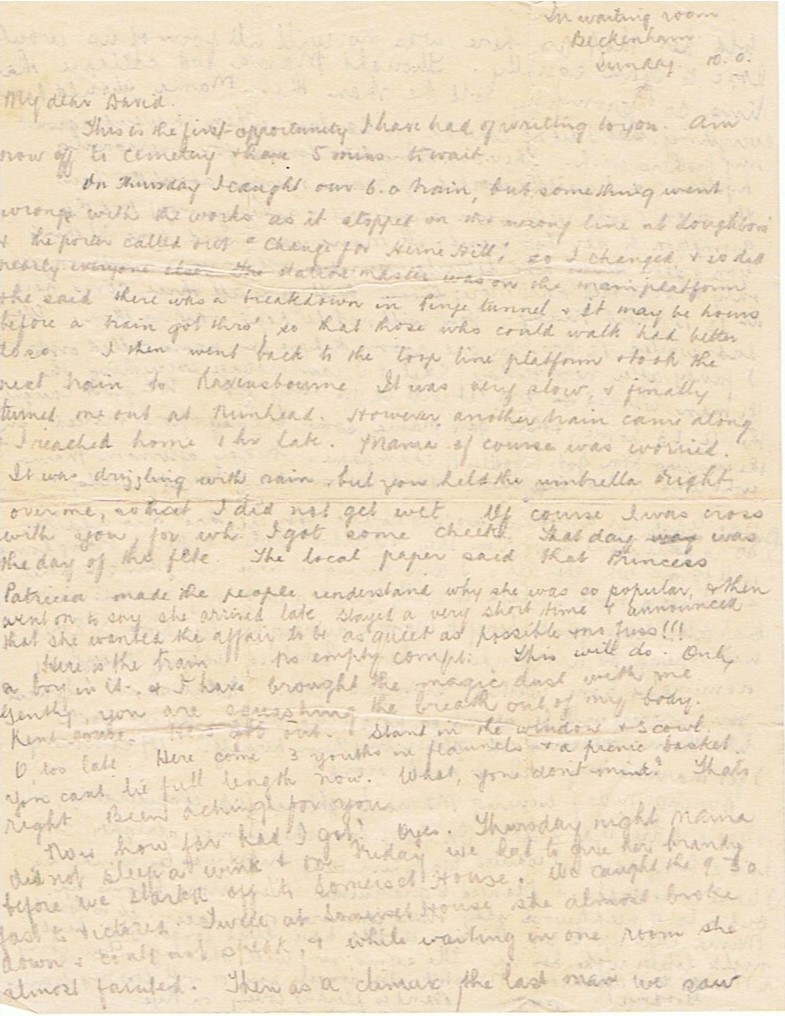 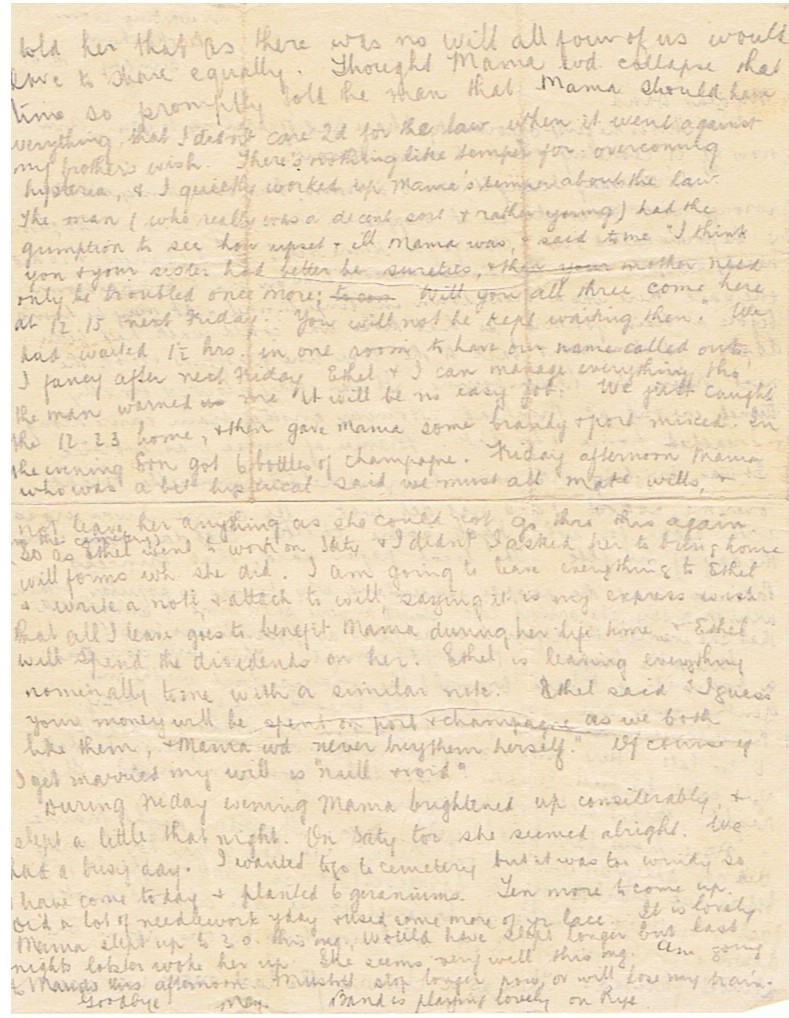 This is the first opportunity I have had of writing to you. Am now off to cemetery and have 5 mins to wait.

On Thursday I caught our 6.0 train, but something went wrong with the works as it stopped on the wrong line at Loughboro’ and the porter called out “change for Herne Hill”; so I changed and so did nearly everyone else. The station master was on the main platform and he said there was a breakdown in Penge tunnel and it may be hours before a train got thro’, so that those who could walk had better do so. I then went back to the loop line platform and took the next train to Ravensbourne. It was very slow and finally turned me out at Nunhead. However another train came along and I reached home 1 hour late. Mama of course was worried. It was drizzling with rain, but you held the umbrella right over me so that I did not get wet. Of course I was cross with you, for which I got some cheek. That day was the day of the fete. The local paper said that Princess Patricia made the people understand why she was so popular, and then went on to say she arrived late, stayed a very short time, and announced that she wanted the affair to be as quiet as possible and no fuss!!!

Here is the train. No empty compt. This will do. Only a boy in it and I have brought the magic dust with me. Gently you are smashing the breath out of my body.

Kent House. He’s got out. Stand in the window and scowl. O too late. Here come 3 youths in flannels and a picnic basket. You can’t be full length now. What, you don’t mind? That’s right. Been aching for you.

Now how far had I got? O yes. Thursday night Mama did not sleep a wink and on Friday we had to give her brandy before we started off to Somerset House. We caught the 9.30 fast to Victoria. Twice at Somerset House she almost broke down and could not speak, and while waiting in one room she almost fainted. Then as a climax, the last man we saw told her that as there was no Will all four of us would have to share equally. Thought Mama would collapse that time so promptly told the man that Mama should have everything and that I didn’t care 2d for the law when it went against my brother’s wish. There’s nothing like a temper for overcoming hysteria, and I quietly worked up Mama’s temper about the law. The man (who really was a decent sort and rather young) had the gumption to see how upset and ill Mama was, said to me “I think you and your sister had better be sureties and then your mother need only to be troubled once more; will you all three come here at 12.15 next Friday. You will not be kept waiting then.” We had waited 1 ½ hours in one room to have our name called out. I fancy after next Friday Ethel and I can manage everything tho’ the man warned me it will be no easy job. We just caught the 12.23 home, and then gave Mama some brandy and port mixed. In the evening Ern got 6 bottles of champagne. Friday afternoon Mama who was a bit hysterical said we must all make wills, and not leave her anything as she could not go thro’ this again.

(In the cemetery). So as Ethel went to work on Saturday and I didn’t, I asked her to bring home will forms which she did. I am going to leave everything to Ethel and write a note and attach to will, saying it is my express wish that all I leave goes to benefit Mama during her life time and Ethel will spend the dividends on her. Ethel is leaving everything nominally to me with a similar note. Ethel said “I guess your money will be spent on port and champagne as we both like them, and Mama would never buy them herself.” Of course if I get married my will is “null and void”.

During Friday evening Mama brightened up considerably, and slept a little that night. On Saturday too she seemed alright. We had a busy day. I wanted to go to cemetery but it was too windy so I have come today and planted geraniums. Ten more to come up. Did a lot of needlework yesterday and did some more of your lace. It is lovely. Mama slept up to 3.0 this morning, and would have slept longer but last night’s lobster woke her up. She seems very well this morning. Am going to Maud’s this afternoon. Mustn’t stop longer now, or will lose my train.

Band is playing lovely on Rye.