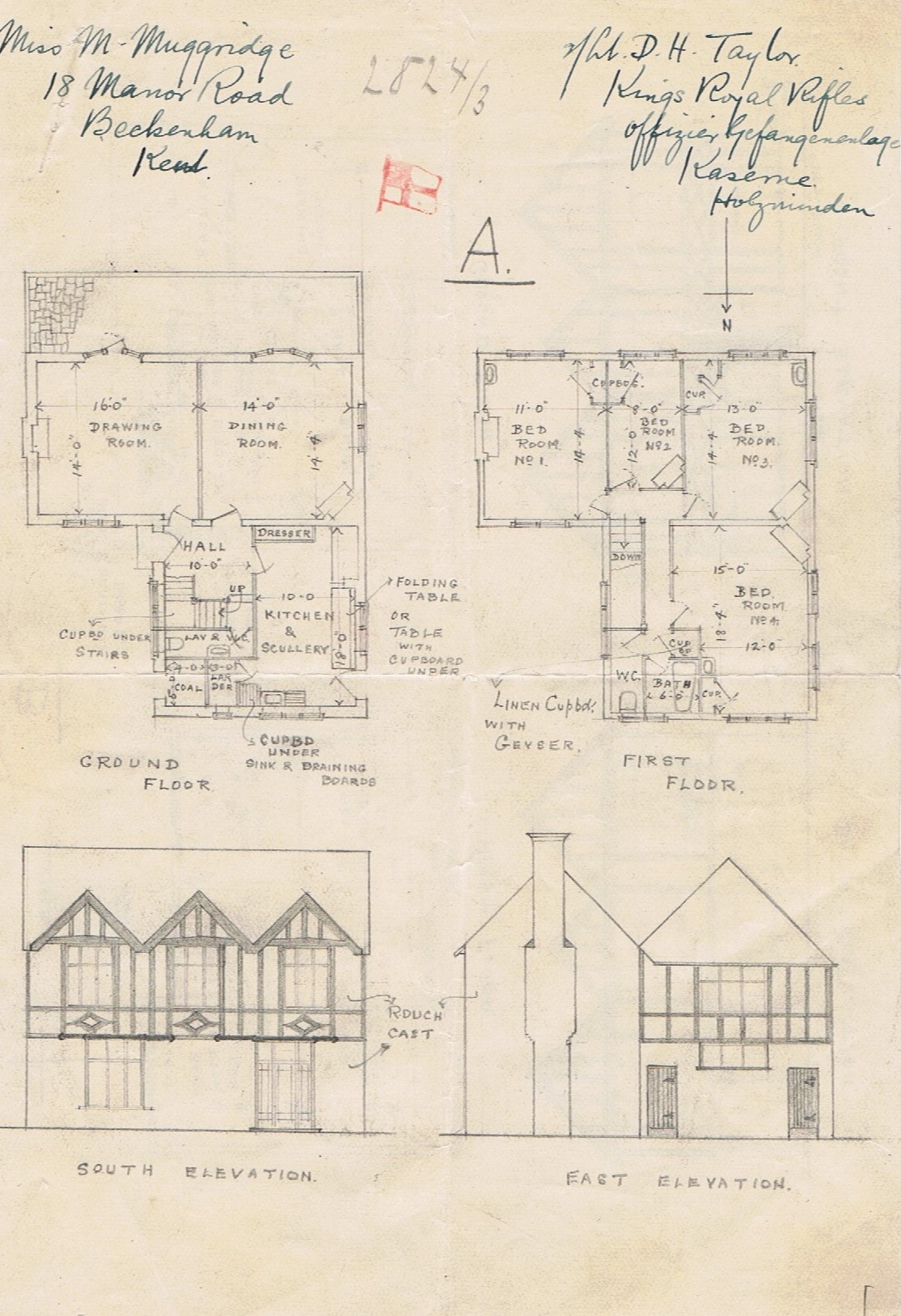 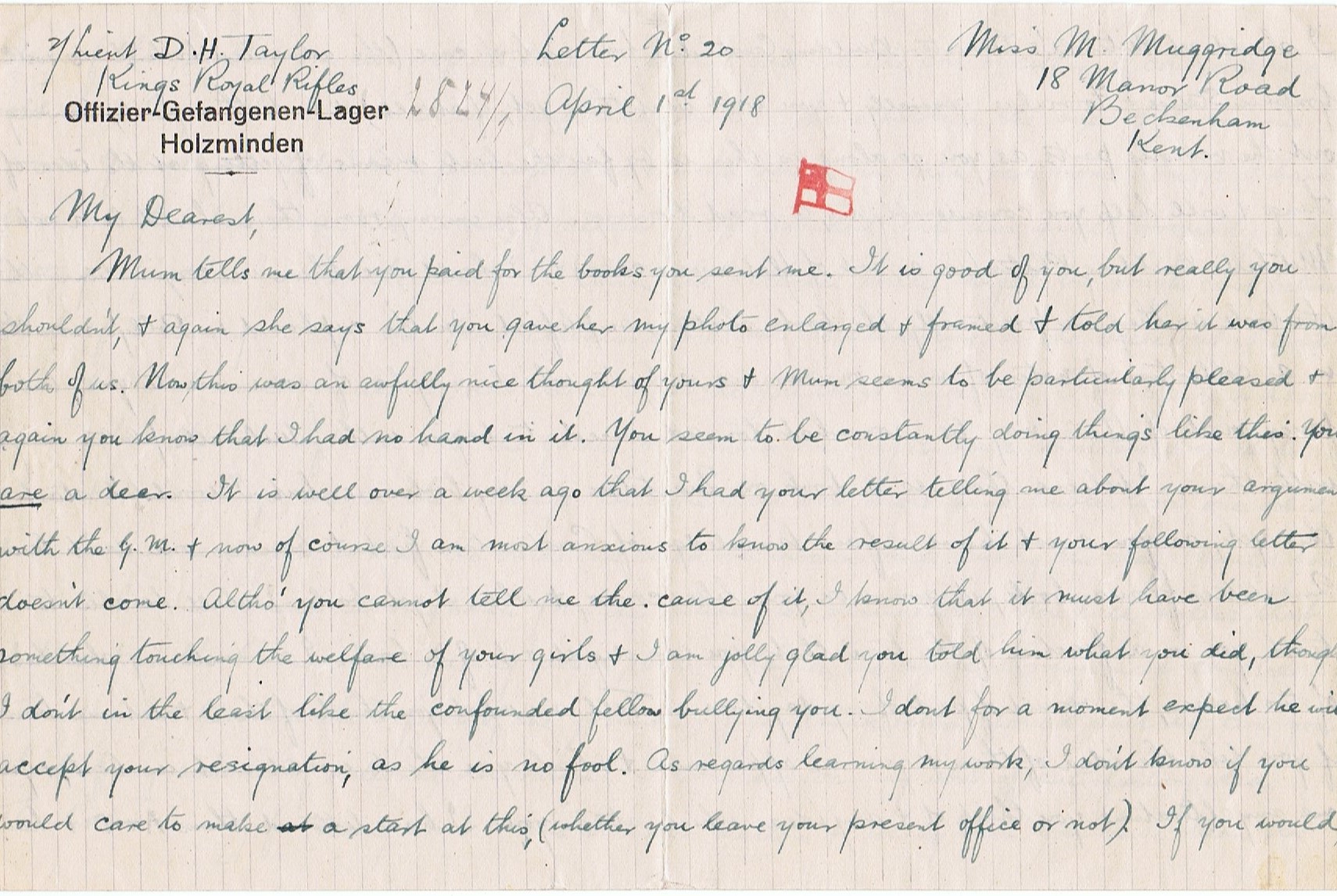 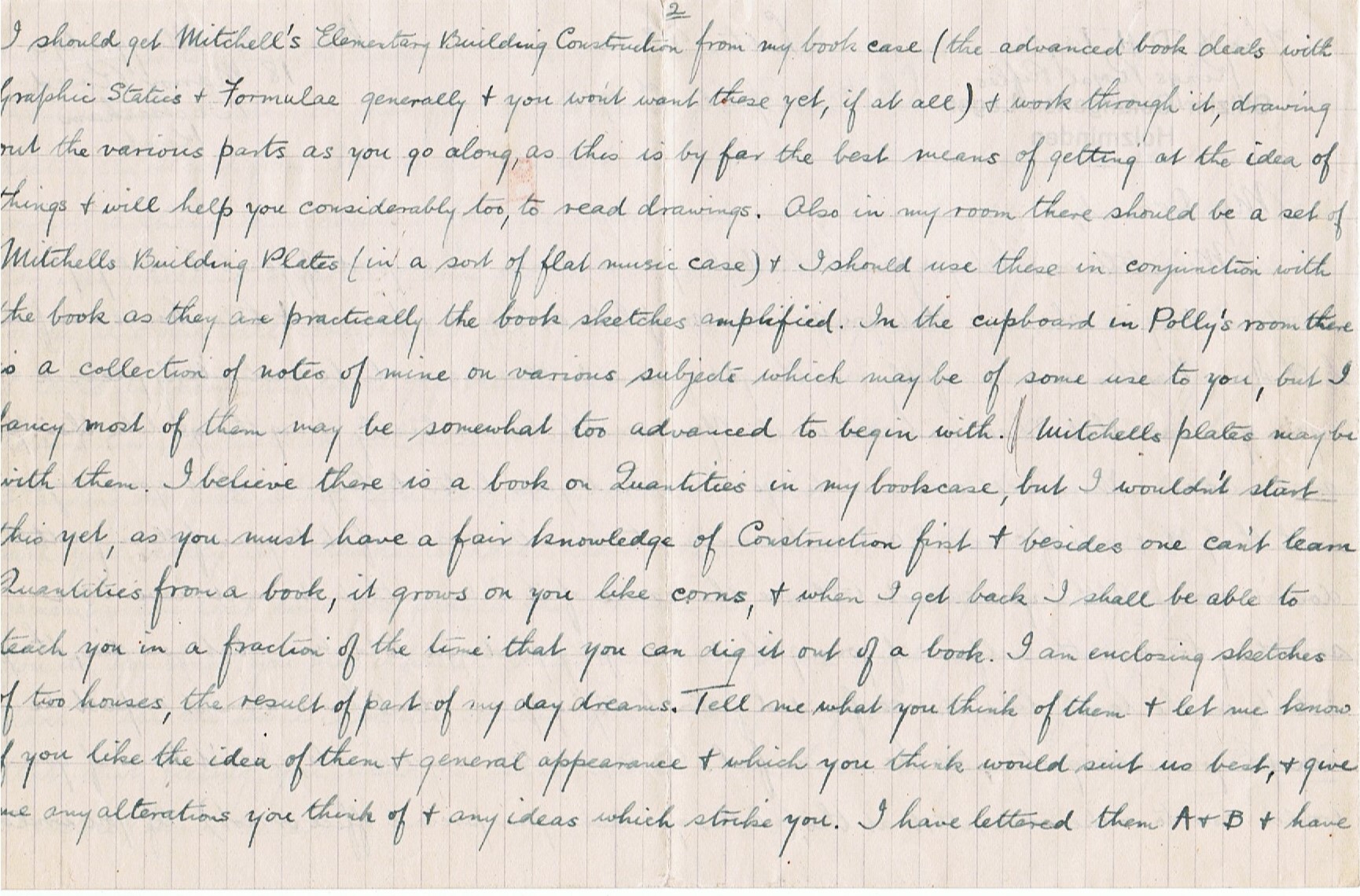 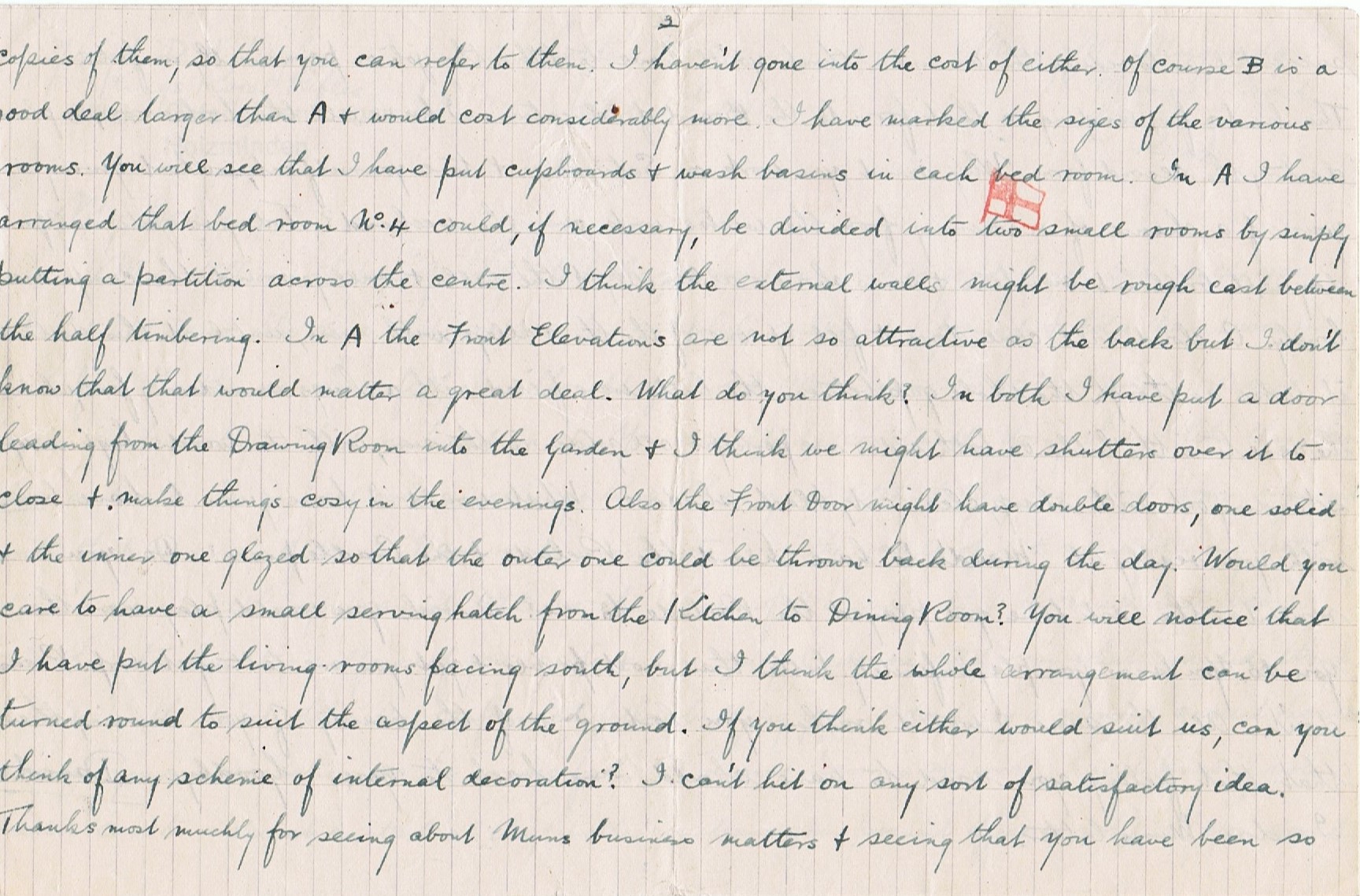 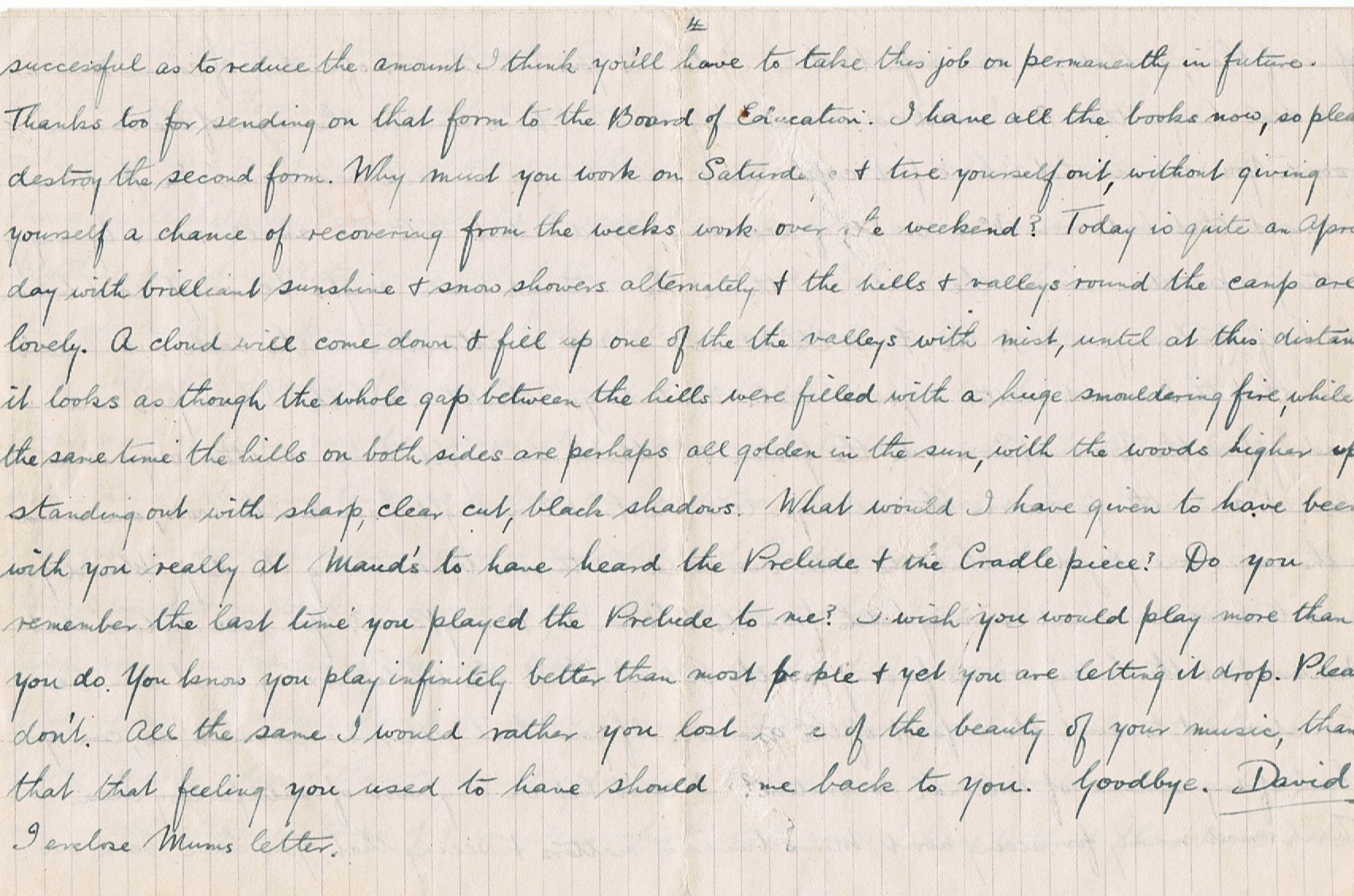 David to May Holzminden 1. 4. 18. Letter No.20
My Dearest,
Mum tells me that you paid for the books you sent me. It is good of you, but really you shouldn’t & again she says that you gave her my photo enlarged & framed & told her it was from both of us. Now this was an awfully nice thought of yours & Mum seems to be particularly pleased & again you know that I had no hand in it. You seem to be constantly doing things like this. You are a dear. It is well over a week ago that I had your letter telling me about your argument with the G.M. & now of course I am most anxious to know the result of it & your following letter doesn’t come. Altho’ you cannot tell me the cause of it, I know that it must have been something touching the welfare of your girls & I am jolly glad you told him what you did, though I don’t in the least like the confounded fellow bullying you. I don’t for a moment expect he will accept your resignation, as he is no fool. As regards learning my work, I don’t know if you would care to make a start at this, (whether you leave your present office or not). If you would, I should get Mitchell’s Elementary Building Construction from my bookcase (the advanced book deals with Graphic Statics & Formulae generally & you won’t want these yet, if at all) & work through it, drawing out the various parts as you go along, as this is by far the best means of getting the idea of things & will help you considerably too, to read drawings. Also in my room there should be a set of Mitchells Building Plates (in a sort of flat music case) & I should use these in conjunction with the book as they are practically the book sketches amplified. In the cupboard in Polly’s room there is a collection of notes of mine on various subjects which may be of some use to you, but I fancy most of them may be somewhat too advanced to begin with. Mitchells plates may be with them. I believe there is a book of Quantities in my bookcase, but I wouldn’t start this yet, as you must have a fair knowledge of Construction first & besides one can’t learn Quantities from a book, it grows on you like corns, & when I get back I shall be able to teach you in a fraction of the time that you can dig it out of a book.
I am enclosing sketches of two houses, the result of part of my day dreams. Tell me what you think of them, and let me know if you like the idea of them and general appearance and which you think would be more suitable. Give me any alterations you think of and any ideas which strike you. I have lettered them A & B, and have copies of them so that you can refer to them. I haven’t gone into the cost of either. Of course B is a good deal larger than A and would cost considerably more. I have marked the sizes of the various rooms. You will see that I have put cupboards and wash basins in each bed room. In A I have arranged that bedroom No. 4 could, if necessary, be divided into two small rooms by simply putting a partition across the centre. I think the external walls might be rough cast between the half timbering. In A the front elevations are not so attractive as the back, but I don’t know that that would matter a great deal. What do you think? In both I have put a door leading from the drawing roam into the garden, and I think you might have shutters over it to close and make things cosy in the evenings. Also the front door might have double doors, one solid and the inner one glazed so that the outer one could be thrown back during the day. Would you care to have a small serving hatch from the kitchen to dining room? You will notice that I have put the living rooms facing south, but I think the whole arrangement can be turned round to suit the aspect of the ground. If you think either would suit you, can you think of any scheme of internal decoration? I can’t hit on any sort of satisfactory idea.
Thanks most muchly for seeing about Mum’s business matters & seeing that you have been so successful as to reduce the amount I think you’ll have to take this job on permanently in future. Thanks too for sending on that form to the Board of Education. I have all the books now, so please destroy the second form. Why must you work on Saturday & tire yourself out, without giving yourself a chance of recovering from the weeks work over the weekend? Today is quite an April day with brilliant sunshine & snow showers alternately & the hills & valleys round the camp are lovely. A cloud will come down & fill up one of the valleys with mist, until at this distance it looks as though the whole gap between the hills were filled with a huge smouldering fire, while at the same time the hills on both sides are perhaps all golden in the sun, with the woods higher up standing out with sharp, clear cut, black shadows. What would I have given to have been with you really at Maud’s to have heard the Prelude & the Cradle piece? Do you remember the last time you played the Prelude to me? I wish you would play more than you do. You know you play infinitely better than most people & yet you are letting it drop. Please don’t. All the same I would rather you lost some of the beauty of your music, than that that feeling you used to have should come back to you.
Goodbye. David. I enclose Mum’s letter.