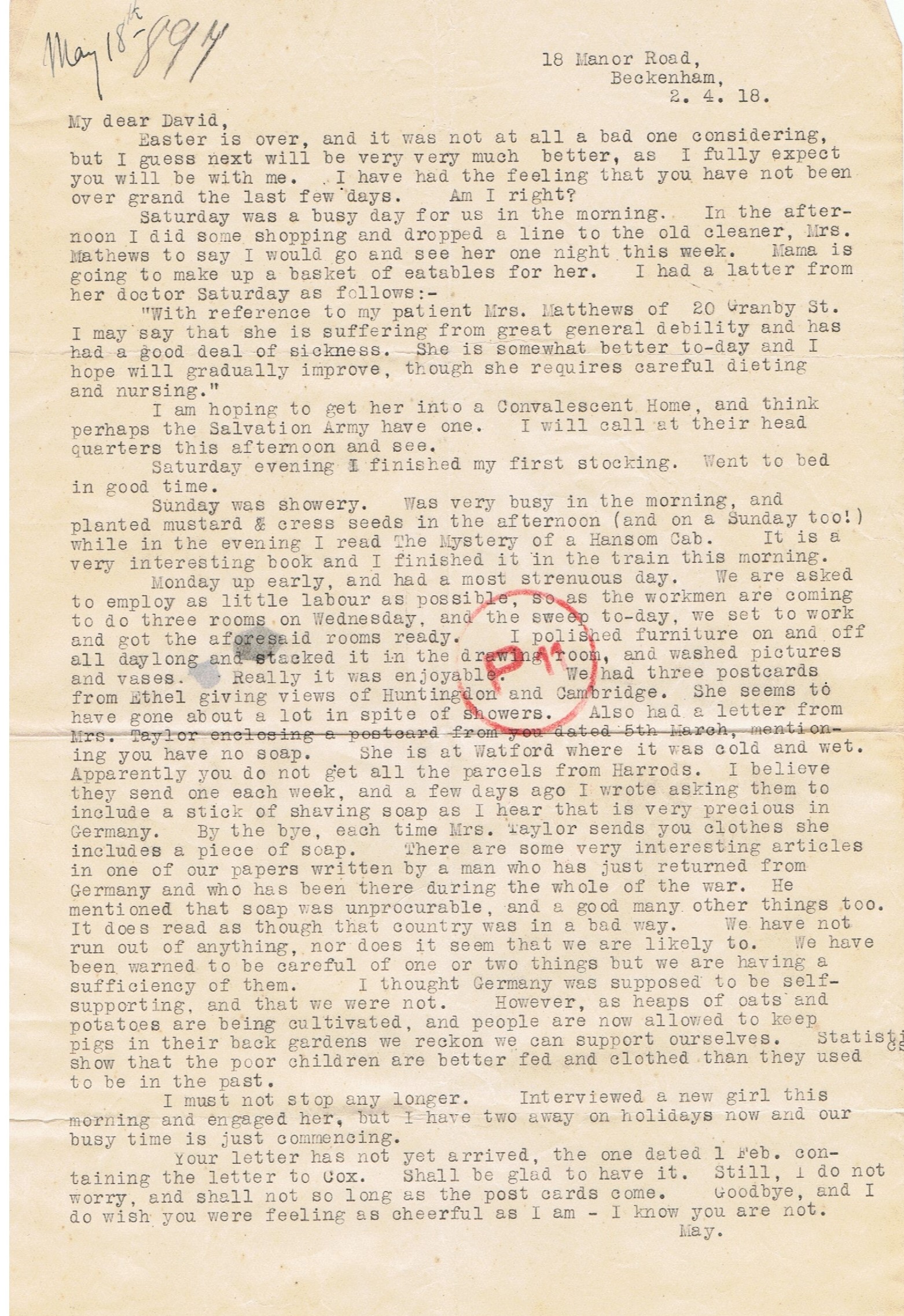 May to David 2.4.18
My dear David,
Easter is over, and it was not at all a bad one considering, but I guess next will be very very much better, as I fully expect you will be with me. I have had the feeling that you have not been over grand these last few days. Am I right?
Saturday was a busy day for us in the morning. In the afternoon I did some shopping and dropped a line to the old cleaner, Mrs Mathews to say I would go and see her one night this week. Mama is going to make up a basket of eatables for her. I had a letter from her doctor Saturday as follows: “With reference to my patient Mrs Matthews of 20 Granby St I may say that she is suffering from great general debility and has had a good deal of sickness. She is somewhat better today and I hope will gradually improve, though she requires careful dieting and nursing.”
I am hoping to get her into a Convalescent Home, and think perhaps the Salvation Army have one. I will call at their headquarters this afternoon and see.
Saturday evening I finished my first stocking. Went to be in good time.
Sunday was showery. Was very busy in the morning and planted mustard and cress seeds in the afternoon (and on Sunday too!) while in the evening I read The Mystery of a Hansom Cab. It is a very interesting book and I finished it in the train this morning.
Monday up early, and had a most strenuous day. We are asked to employ as little labour as possible, so as the workmen are coming to do three rooms on Wednesday, and the sweep today, we set to work and got the aforesaid rooms ready. I polished furniture on and off all day long and stacked it in the drawing room, and washed pictures and vases. Really it was enjoyable. We had three postcards from Ethel giving views of Huntingdon and Cambridge. She seems to have gone about s lot in spite of showers. Also had a letter from Mrs Taylor enclosing a postcard from you dated 5th March, mentioning you have no soap. She is at Watford where it was cold and wet. Apparently you do not get all the parcels from Harrods. I believe they send one each week, and a few days ago I wrote asking them to include a stick of shaving soap as I hear that it is very precious in Germany. By the bye, each time Mrs Taylor send you clothes she includes a piece of soap. There are some very interesting articles in one of our papers written by a man who has just returned from Germany and who has been there during the whole of the war. He mentioned that soap was unprocurable, and a good many other things too. It does read as though that country was in a bad way. We have not run out of anything, nor does it seem that we are likely to. We have been warned to be careful of one or two things but we are having a sufficiency of them. I thought Germany was supposed to be self-supporting, and that we were not. However, as heaps of oats and potatoes are being cultivated, and people are now allowed to keep pigs in their back gardens we reckon we can support ourselves. Statistics show that the poor children are better fed and clothed than they used to be in the past.
I must not stop any longer. Interviewed a new girl this morning and engaged her, but I have two away on holidays now and our busy time is just commencing.
Your letter has not yet arrived, the one dated 1 Feb containing the letter to Cox. Shall be glad to have it. Still, I do not worry, and shall not as long as the post cards come. Goodbye, and I do wish you were feeling as cheerful as I am – I know you are not.
May