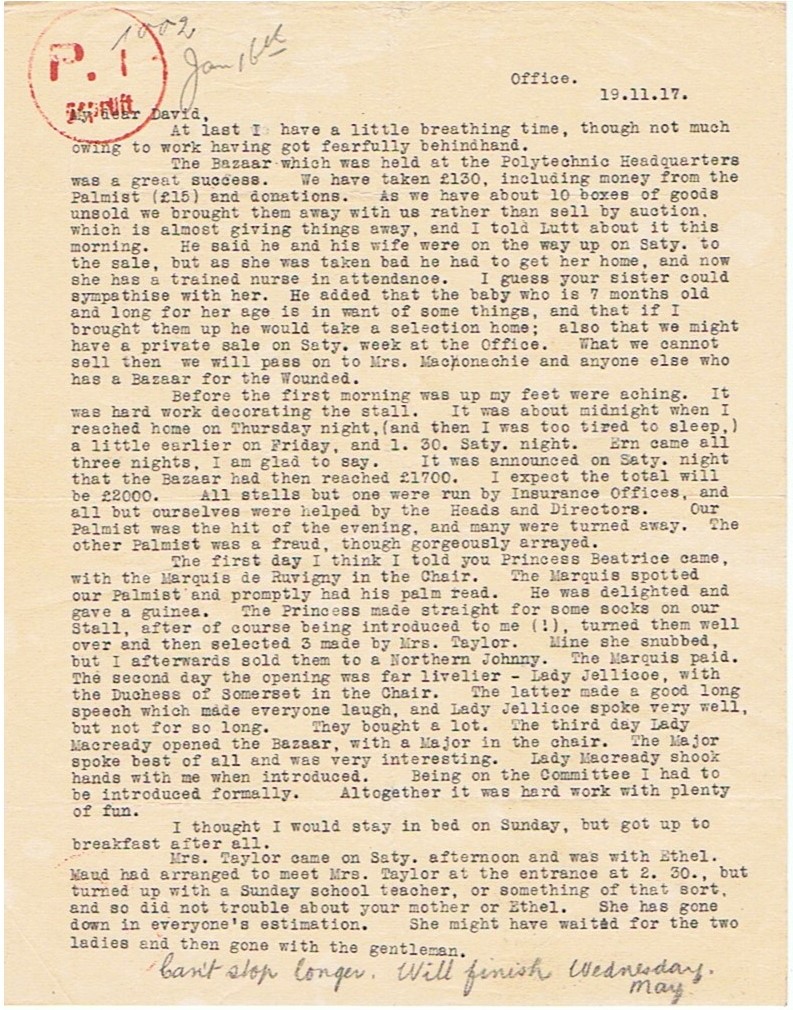 At last I have a little breathing time, though not much owing to work having got fearfully behindhand.

The Bazaar which was held at the Polytechnic Headquarters was a great success.              We have taken £130, including money from the Palmist (£15) and donations. As we have about 10 boxes of goods unsold we brought them away with us rather than sell by auction, which is almost giving things away, and I told Lutt about it this morning. He said he and his wife were on the way up on Saturday To the sale, but as she was taken bad he had to get her home, and now she has a trained nurse in attendance. I guess your sister could sympathise with her. He added that the baby who is 7 months old and long for her age is in want of some things, and that if I brought them up he would take a selection home; also that we might have a private sale on Saturday week at the Office. What we cannot sell then we will pass on to Mrs. Maconachie and anyone else who has a Bazaar for the Wounded.

Before the first morning was up my feet were aching. It was hard work decorating the stall. It was about midnight when I reached home on Thursday night, (and then I was too tired to sleep,) a little earlier on Friday, and 1. 30. Saturday night. Ern came all three nights, I am glad to say. It was announced on Saturday night that the Bazaar had then reached £1700. I expect the total will be £2000. All stalls but one were run by Insurance Offices, and all but ourselves were helped by the Heads and Directors. Our Palmist was the hit of the evening, and many were turned away. The other Palmist was a fraud, though gorgeously arrayed.

The first day I think I told you Princess Beatrice came, with the Marquis de Ruvigny in the Chair. The Marquis spotted our Palmist and promptly had his palm read. He was delighted and gave a guinea. The Princess made straight for some socks on our Stall, after of course being introduced to me (!), turned them well over and then selected 3 made by Mrs. Taylor. Mine she snubbed, but I afterwards sold them to a Northern Johnny. The Marquis paid. The second day the opening was far livelier – Lady Jellicoe, with the Duchess of Somerset in the Chair. The latter made a good long speech which made everyone laugh, and Lady Jellicoe spoke very well, but not for so long. They bought a lot. The third day Lady Macready opened the Bazaar, with a Major in the chair. The Major spoke best of all and was very interesting. Lady Macready shook hands with me when introduced. Being on the Committee I had to be introduced formally. Altogether it was hard work with plenty of fun.

I thought I would stay in bed on Sunday, but got up to breakfast after all.

Mrs. Taylor came on Saturday afternoon and was with Ethel. Maud had arranged to meet Mrs. Taylor at the entrance at 2. 30, but turned up with a Sunday school teacher, or something of that sort, and so did not trouble about your mother or Ethel. She has gone down in everyone’s estimation. She might have waited for the two ladies and then gone with the gentleman.