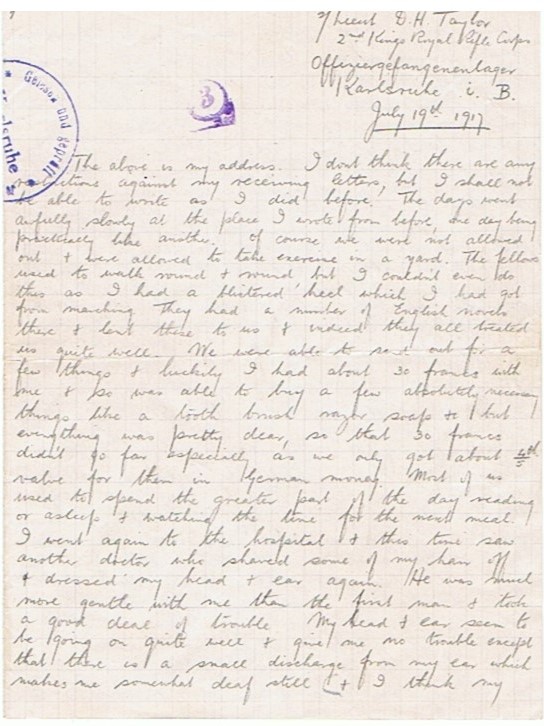 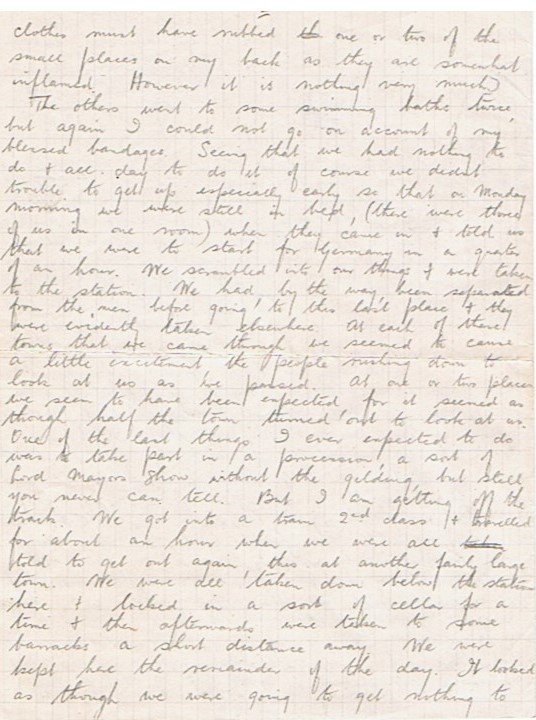 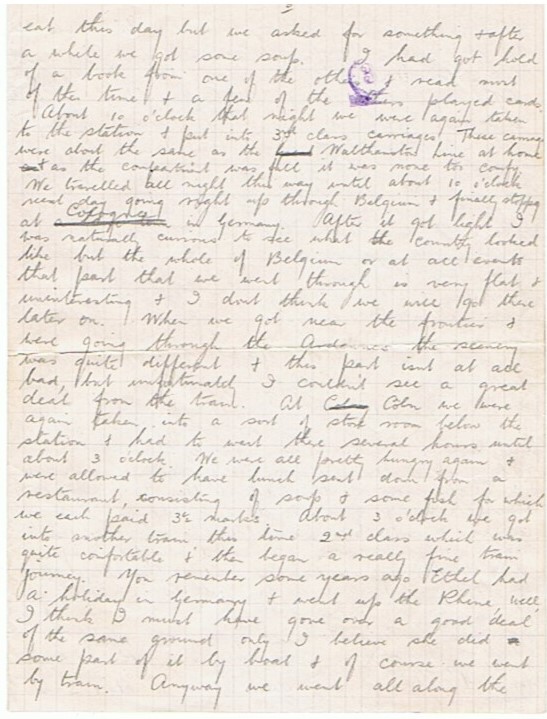 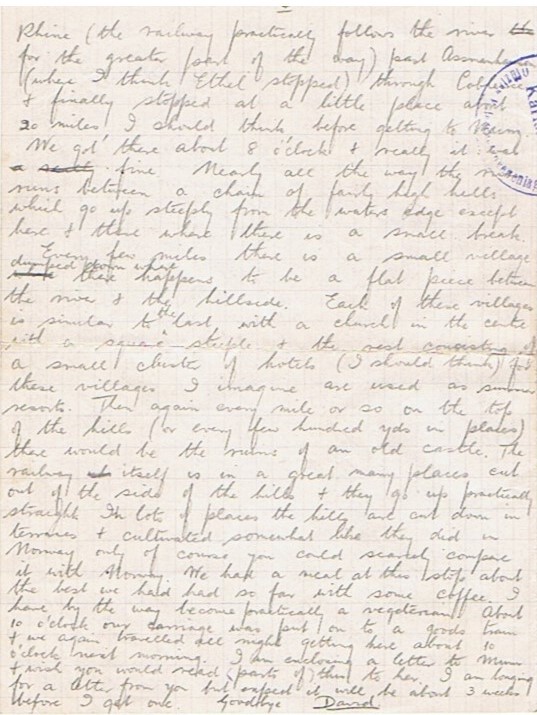 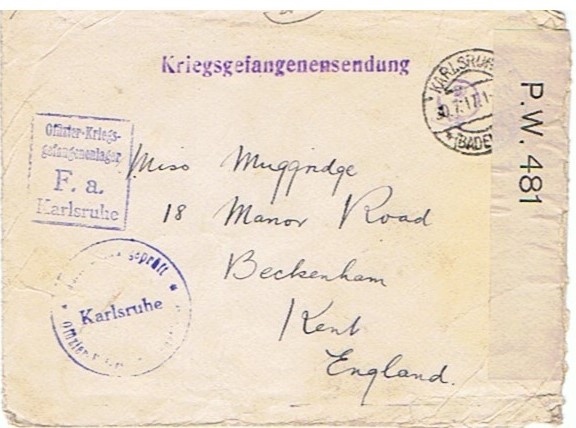 The above is my address. I don’t think there are any restrictions against my receiving letters, but I shall not be able to write as I did before. The days went awfully slowly at the place I wrote from before, one day being practically like another. Of course we were not allowed out and were allowed to take exercise in a yard. The fellows used to walk round and round, but I couldn’t even do this as I had a blistered heel which I had got from marching. They had a number of English novels there and lent these to us and indeed they all treated us quite well.

We were able to send out for a few things and luckily I had about 30 francs with me and so was able to buy a few absolutely necessary things like a tooth brush, razor, soap etc. but everything was pretty dear, so that 30 francs didn’t go far especially as we only got about 1/5th value for them in German money. Most of us used to spend the greater part of the day reading or asleep and watching the time for the next meal.

I went again to the hospital and this time saw another doctor who shaved some of my hair off and dressed my head and ear again. He was much more gentle with me than the first man and took a good deal of trouble. My head and ear seem to be going on quite well and give me no trouble except that there is a small discharge from my ear which makes me somewhat deaf still (and I think my clothes must have rubbed one or two of the small places on my back as they are somewhat inflamed).However it is nothing very much.

The others went to some swimming baths twice, but again I could not go on account of my blessed bandages. Seeing that we had nothing to do and all day to do it of course we didn’t trouble to get up especially early so that on Monday morning we were still in bed (there were three of us in one room) when they came in and 2 told us that we were to start for Germany in a quarter of an hour.

We scrambled into our things and were taken to the station. We had, by the way, been separated from the men before going to this last place and they were evidently taken elsewhere. At each of these towns that we came through we seemed to cause a little excitement, the people rushing down to look at us as we passed. At one or two places we seem to have been expected, for it seemed as though half the town turned out to look at us. One of the last things I ever expected to do was to take part in a procession, a sort of Lord Mayor’s Show without the gilding, but still you never can tell. But I am getting off the track. We got into a train 2nd class and travelled for about an hour when we were all told to get out again, this at another fairly large town. We were all taken down below the station here and locked in a sort of cellar for a time and then afterwards were taken to some barracks a short distance away. We were kept here the remainder of the day. It looked as though we were going to get nothing to eat this day but we asked for something and after a while we got some soup. I had got hold of a book from one of the others and read most of the time and a few of the others played cards.

About 10 o’clock that night we were again taken to the station and put into 3rd class carriages. These carriages were about the same as the Walthamstow Line at home and as the compartment was full it was none too comfy. We travelled all night this way until about 10 o’clock next day going right up through Belgium and finally stopping at Cologne in Germany. After it got light I was naturally curious to see what the country looked like but the whole of Belgium or at all events that part that we went through is very flat and uninteresting and I don’t think we will go there later on. When we got near the frontier and were going through the Ardennes the scenery was quite different and this part isn’t at all bad, but unfortunately I couldn’t see a great deal from the train. At Coln we were again taken into a sort of store room below the station and had to wait there several hours until about 3 o’clock. We were all pretty hungry again and were allowed to have lunch sent down from a restaurant, consisting of soup and some fish for which we each paid 3- marks.

About 3o’clock we got into another train, this time 2nd class which was quite comfortable and then began a really fine train journey. You remember some years ago Ethel had a holiday in Germany and went up the Rhine, well I think I must have gone over a good deal of the same ground only I believe she did some part of it by boat and of course we went by train. Anyway we went all along the Rhine (the railway practically follows the river for the greater part of the way) past      Assmanhausen (where I think Ethel stopped) through   Coblence and finally stopped at a little place about 20 miles, I should think, before getting to Mainz.

We got there about 8 o’clock and really it was fine. Nearly all the way the river runs between a chain of fairly high hills which go up steeply from the waters edge except here and there where there is a small break.

Every few miles there is a small village dumped down where there happens to be a flat piece between the river and the hillside. Each of these villages is similar to the last, with a church in the centre with a square steeple and the rest consisting of a small cluster of hotels (I should think) for these villages I imagine are used as summer resorts. Then again every mile or so on the top of the hills (or every few hundred yards in places) there would be the ruins of an old castle. The railway itself is in a great many places cut out of the side of the hills and they go up practically straight. In lots of places the hills are cut down in terraces and cultivated somewhat like they did in Norway only of course you could scarcely compare it with Norway. We had a meal at this stop about the best we had had so far with some coffee. I have by the way become practically a vegetarian. About 10 o’clock our carriage was put on to a goods train and we again travelled all night getting here about 10 o’clock next morning.

I am enclosing a letter to Mum and wish you would read parts of this to her. I am longing for a letter from you but expect it will be about 3 weeks before I get one. Goodbye.