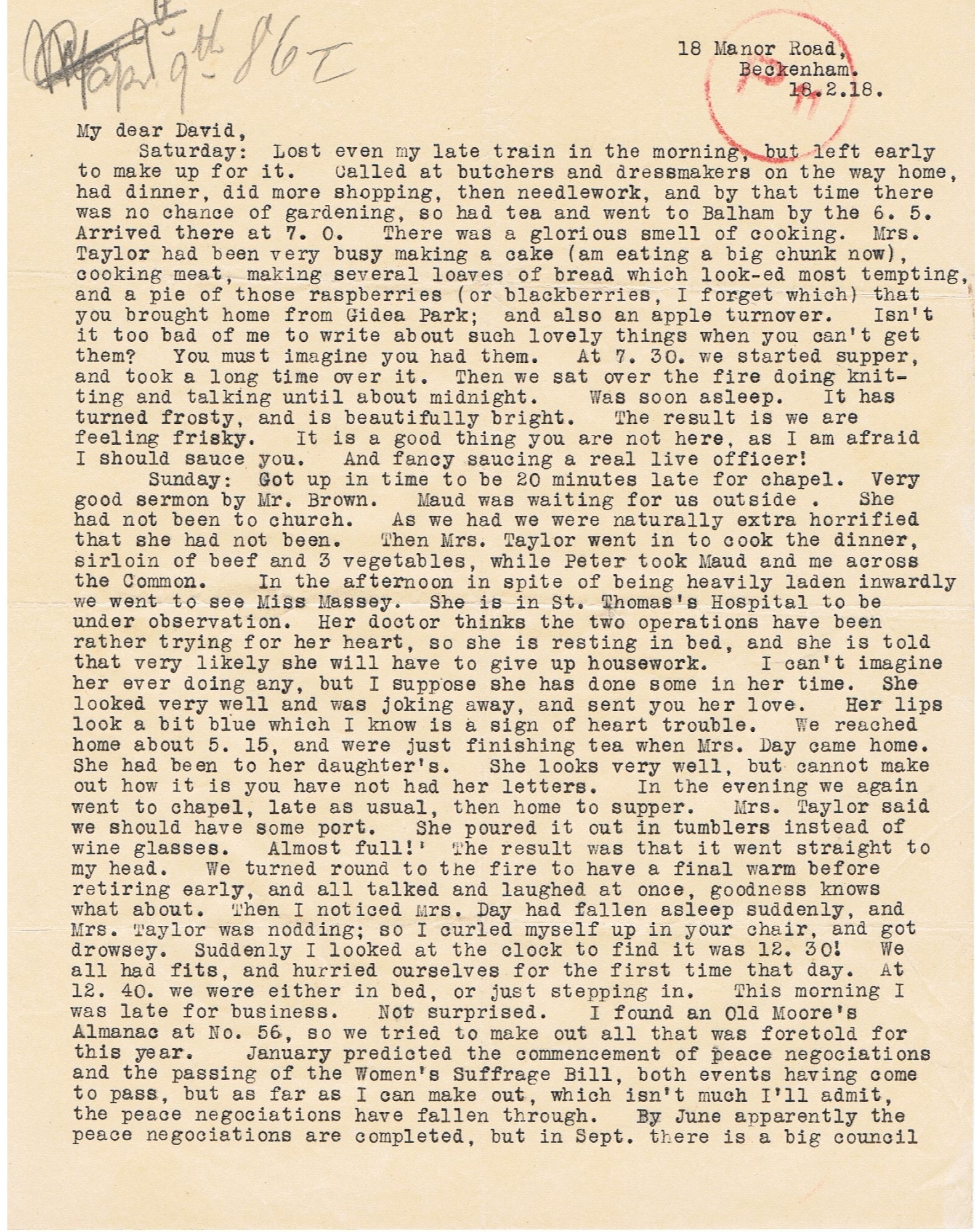 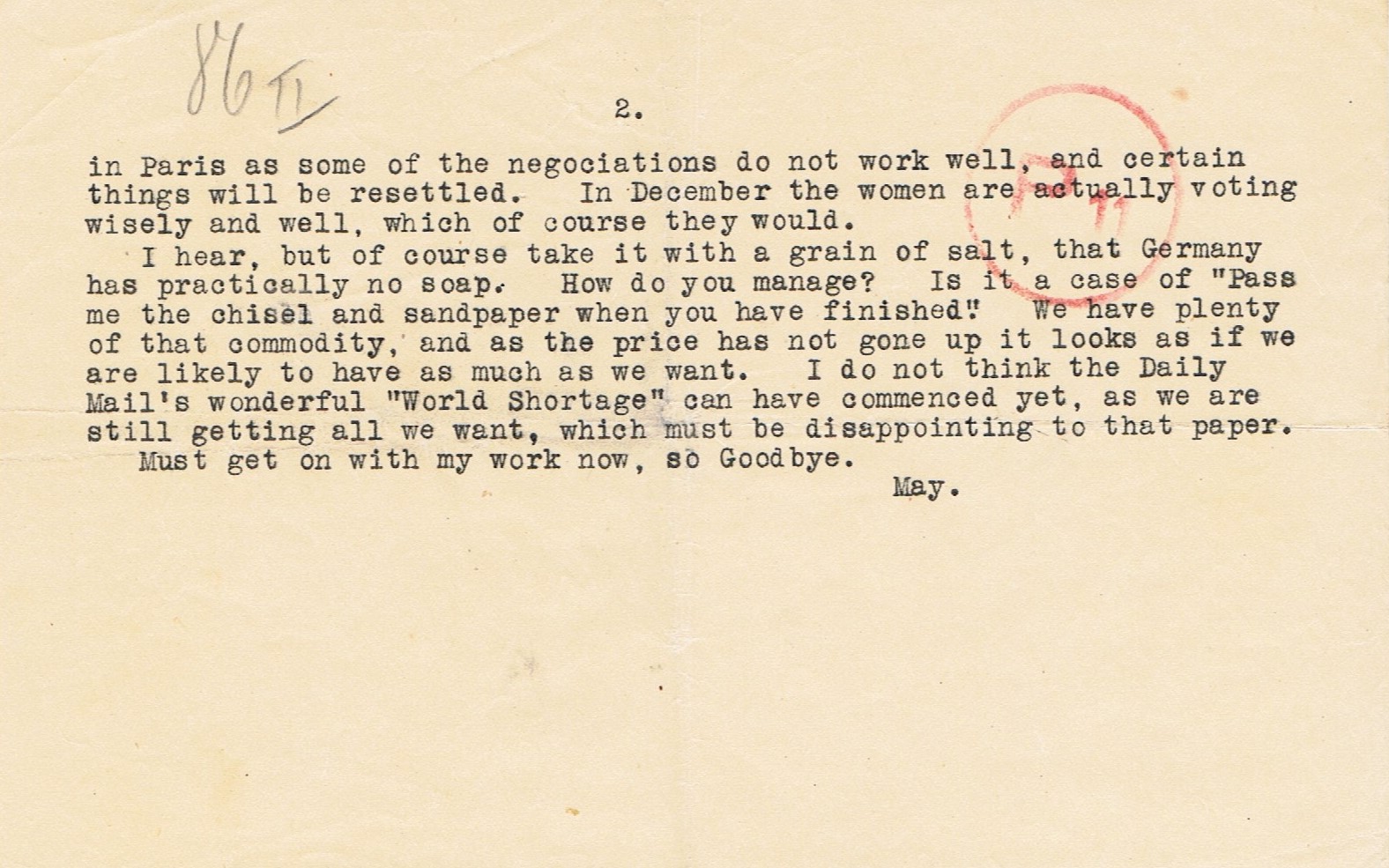 May to David Beckenham 18.2.8.
My dear David,
Saturday: Lost even my late train in the morning, but left early to make up for it. Called at butchers and dressmakers on the way home, had dinner, did more shopping, then needlework, and by that time there was no chance of gardening, so had tea and went to Balham by the 6. 5. Arrived there at 7.0. There was a glorious smell of cooking. Mrs. Taylor had been very busy making a cake (am eating a big chunk now), cooking meat; making several loaves of bread which looked most tempting, and a pie of those raspberries (or blackberries, I forget which) that you brought home from Gidea Park; and also an apple turnover. Isn’t it too bad of me to write about such lovely, things when you can’t get them? You must imagine you had them. At 7.30. we started supper, and took a long time over it. Then we sat over the fire doing knitting and talking until about midnight. Was soon asleep. It has turned frosty, and is beautifully bright. The result is we are feeling frisky. It is a good thing you are not here, as I am afraid. I should sauce you. And fancy saucing a real live officer!
Sunday: Got up in time to be 20 minutes late for chapel. Very good sermon by Mr. Brown. Maud was waiting for us outside. She had not been to church. And we had we were naturally extra horrified that she had not been. Then Mrs. Taylor went in to cook the dinner, sirloin of beef and 3 vegetables, while Peter took Maud and me across the Common. In the afternoon in spite of being heavily laden inwardly we went to see Miss Massey. She is in St. Thomas’s Hospital to. Be under observation. Her doctor thinks the two operations have been rather trying for her heart, so she is resting in bed, and she is told that very likely she will have to give up housework. I can’t imagine her ever doing any, but I suppose she has done some in her time. She looked very well and was joking away, and sent you her love. Her lips look a bit blue which I know is a sign of heart trouble. We reached home about 5. 15, and were just finishing tea when Mrs Day came home. She had been to her daughter’s. She looks very well, but cannot make out how it is you have not had her letters. In the evening we again went to chapel, late as usual, then home to supper. Mrs Taylor said we should have some port. She poured it out in tumblers instead of wine glasses. Almost full! The result was that it went straight to my head. We turned round to the fire to have a final warm before retiring early, and all talked and laughed at once, goodness knows what about. Then I noticed. Mrs Day had fallen asleep suddenly, and Mrs. Taylor was nodding; so I curled myself up in your chair, and got drowsey. Suddenly I looked at the clock to find it was 12.30! We all had fits, and hurried ourselves for the first time that day. At 12.40. we were either in bed, or just stepping in. This morning I was late for business. Not surprised. I found an Old Moore’s Almanac at No. 56, so we tried to. make out all that was foretold for this year. January predicted the commencement of peace negociations and the passing of the Women’s Suffrage Bill, both events having come to pass, but as far as I can make out, which isn’t much I’ll admit, the peace negociations have fallen through. By June apparently the peace negociations are completed, but in Sept. there is a big council in Paris as some of the negociations do not work well and certain things will be resettled. In December the women are actually voting wisely and well, which of course they would.
I hear, but of course take it with a grain of salt, that Germany has practically no soap. How do you manage? Is it a case of “Pass me the chisel and sandpaper when you have finished.” We plenty of that commodity, and as the price has not gone up it looks as if we are likely to have as much as we want. I do not think the Daily Mail’s wonderful “World Shortage” can have commenced yet, as we are still getting all we want, which must be disappointing to that paper.
Must get on with my work now, so Goodbye. May