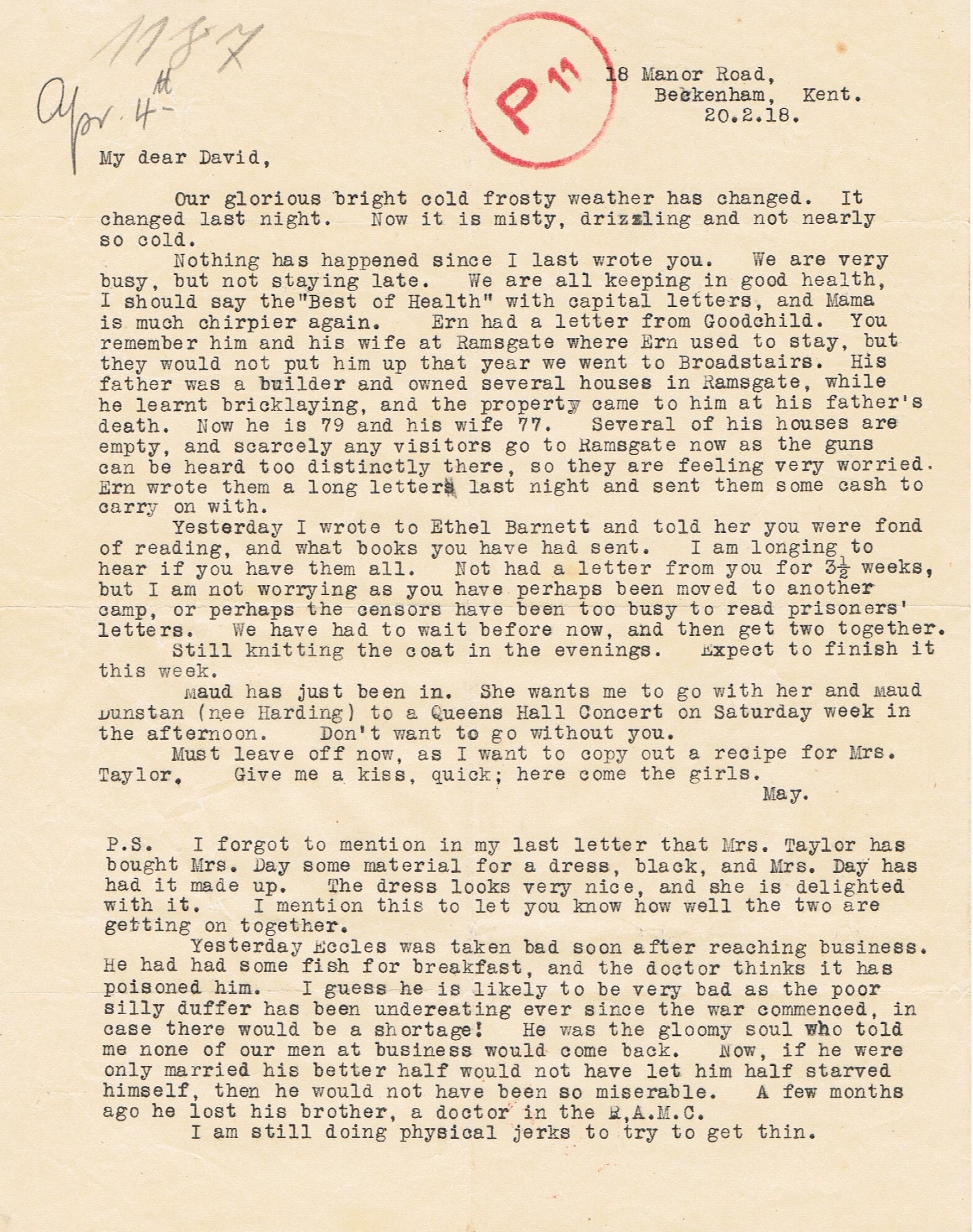 May to David Beckenham, Kent. 20.2.18.
My dear David,
Our glorious bright cold frosty weather has changed. It changed last night. Now it is misty, drizzling and not nearly so cold.
Nothing has happened since I last wrote you. We are very busy, but not staying late. We are all keeping in good health, I should say the “Best of Health” with capital letters, and Mama is much chirpier again. Ern had a letter from Goodchild. You remember him and his wife at Ramsgate where Ern used to stay, but they would not put him up that year we went to Broadstairs. His father was a builder and owned several houses in Ramsgate, while he learnt bricklaying, and the property came to him at his father’s death. Now he is 79 and his wife 77. Several of his houses are empty, and scarcely any visitors go to Ramsgate now as the guns can be heard too distinctly there, so they are feeling very worried. Ern wrote them a long letter last night and sent them some cash to carry on with.
Yesterday I wrote to Ethel Barnett and told her you were fond of reading, and what books you have had sent. I am longing to hear if you have them all. Not had a letter from you for 3 1/2 weeks, but I am not worrying as you have perhaps been moved to another camp, or perhaps the censors have been too busy to read prisoners’ letters. We have had to wait before now, and then get two together.
Still knitting the coat in the evenings. I expect to finish it this week.
Maud has just been in. She wants me to go with her and Maud Dunstan (nee Harding) to a Queens Hall Concert on Saturday week in the afternoon. Don’t want to go without you.
Must leave off now, as I want to copy out a recipe for Mrs. Taylor. Give me a kiss, quick; here come the girls.
May.
P.S. I forgot to mention in my last letter that Mrs. Taylor has bought Mrs. Day some material for a dress, black, and Mrs. Day has had it made up. The dress looks very nice, and she is delighted with it. I mention this to let you know how well the two are getting on together.
Yesterday Eccles was taken bad soon after reaching business. He had had some fish for breakfast, and the doctor thinks it has poisoned him. I guess he is likely to be very bad as the poor silly duffer has been under eating ever since the war commenced in case there would be a shortage: He was the gloomy soul who told me none of our men at business would come back. Now, if he were only married his better half would not have let him half starved himself, then he would not have been so miserable. A few months ago he lost his brother, a doctor in the R.A.M.C.
I am still doing physical jerks to try to get thin.