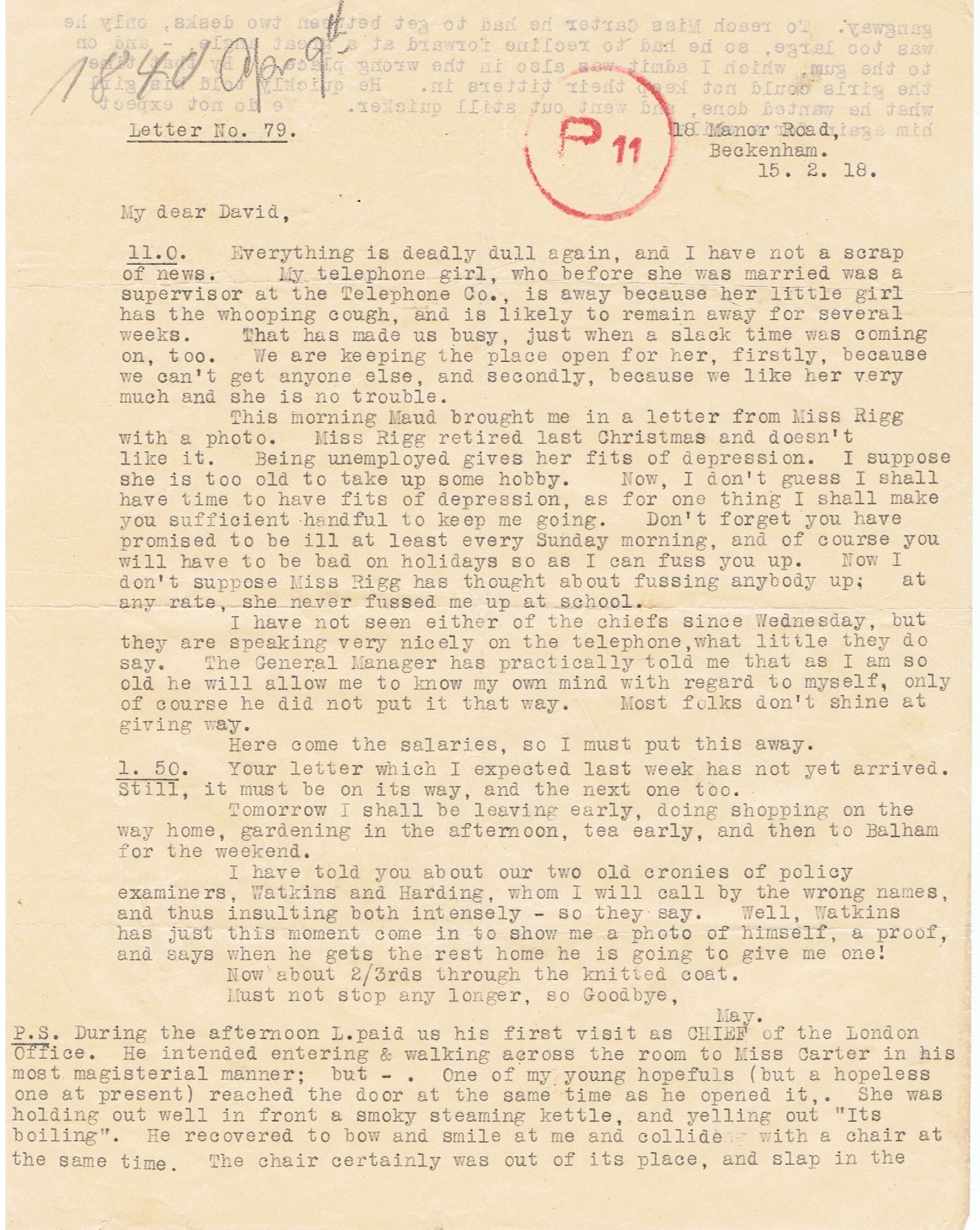 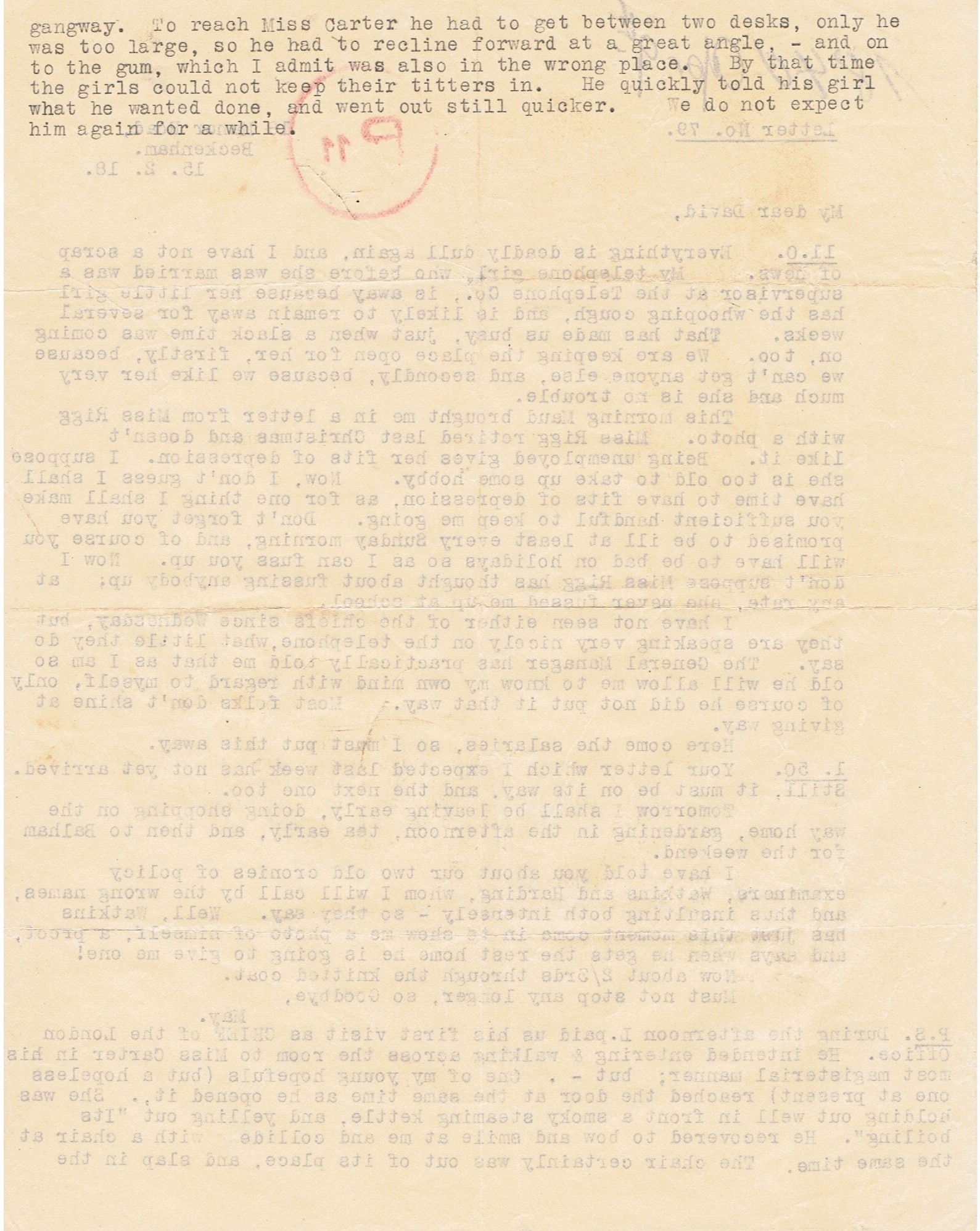 May to David 15.2.18 Letter No.79
My dear David,
11.0. Everything is deadly dull again, and I have not a scrap of news. My telephone girl, who before she was married was a supervisor at the Telephone Co., is away because her little girl has the whooping cough, and is likely to remain away for several weeks. That has made us busy, just when a slack time was coming on, too. We are keeping the place open for her, firstly, because we can’t get anyone else, and secondly, because we like her very much and she is no trouble.
This morning Maud brought me in a letter from Miss Rigg with a photo. Miss Rigg retired last Christmas and doesn’t like it. Being unemployed gives her fits of depression. I suppose she is too old to take up some hobby. Now, I don’t guess I shall have time to have fits of depression, as for one thing I shall make you sufficient handful to keep me going. Don’t forget you have promised to be ill at least every Sunday morning, and of course you will have to be bad on holidays so as I can fuss you up. Now I don’t suppose Miss Rigg has thought about fussing anybody up; at any rate, she never fussed me up at school.
I have not seen either of the chiefs since Wednesday, but they are speaking very nicely on the telephone, what little they do say. The General Manager has practically told me that as I am so old he will allow me to know my own mind with regard to myself, only of course he did not put it that way. Most folks don’t shine at giving way.
Here come the salaries, so I must put this away.
1. 50. Your letter which I expected last week has not yet arrived. Still, it must be on its way, and the next one too.
Tomorrow I shall be leaving early, doing shopping on the way home, gardening in the afternoon, tea early, and then to Balham for the weekend.
I have told you about our two old cronies of policy examiners, Watkins and Harding, whom I will call by the wrong names, and thus insulting both intensely – so they say. Well, Watkins has just this moment come in to show me a photo of himself, a proof, and says when he gets the rest home he is going to give me one!
Now about 2/3rds through the knitted coat.
Must not stop any longer, so Goodbye,
May.
P.S. During the afternoon L. paid us his first visit as CHIEF of the London Office. He intended entering and walking across the room to Miss Carter in his most magisterial manner; but – . One of my young hopefuls (but a hopeless at present) reached the door at the same time as he opened it. She was holding out well in front a smoky steaming kettle, and yelling out “Its boiling”. He recovered to bow and smile at me and collide with a chair at the same time. The chair certainly was out of its place, and slap in the gangway. To reach Miss Carter he had to get between two desks, only he was too large, so he had to recline forward at a great angle, – and on to the gum, which I admit was also in the wrong place. By that time the girls could not keep their twitters in. He quickly told his girl what he wanted done, and went out still quicker. We do not expect to see him again for a while.