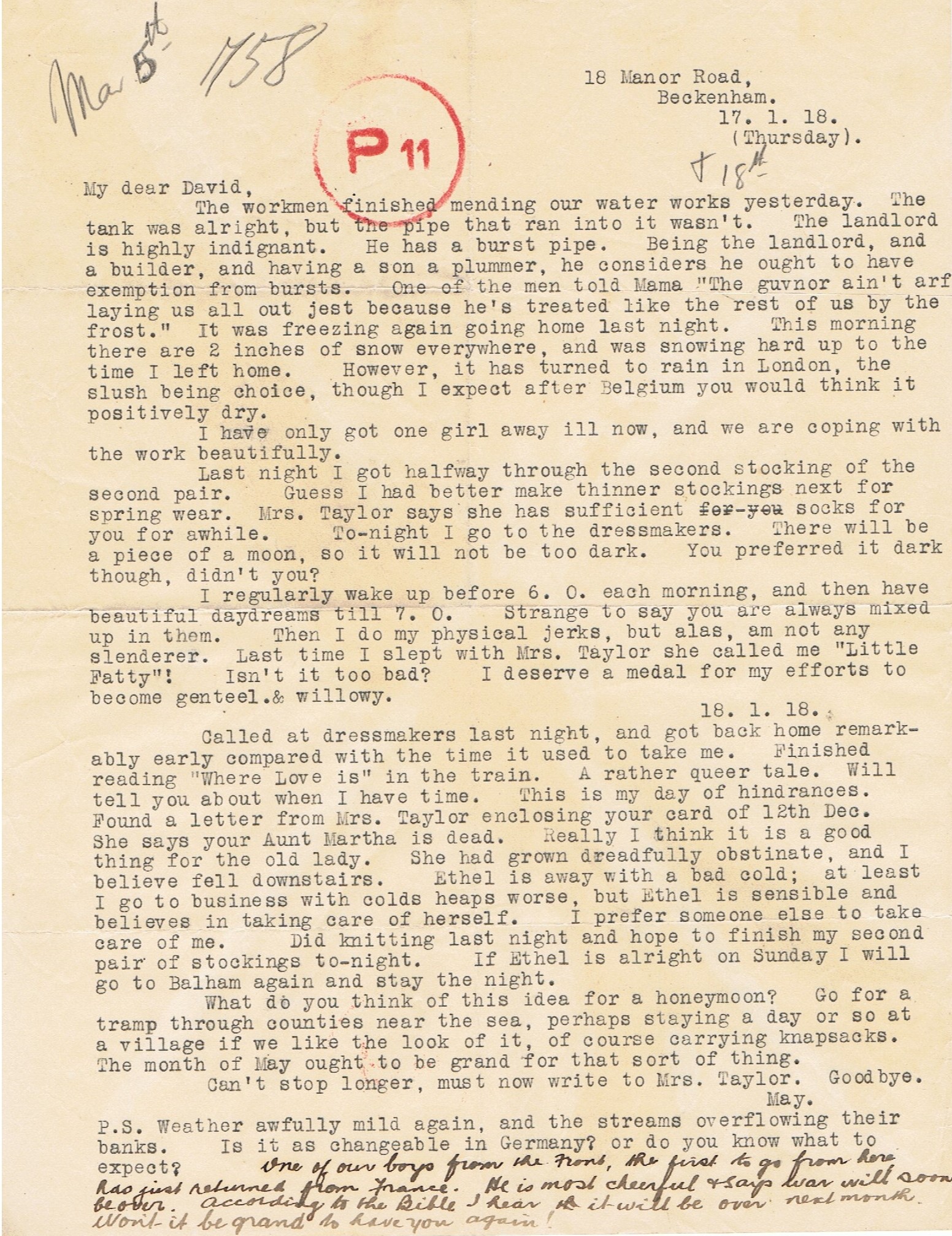 May to David 18 Manor Road, Beckenham. 17.1.18 (Thursday)
My dear David,
The workmen finished mending our water works yesterday. The tank was alright, but the pipe that ran into it wasn’t. The landlord is highly indignant. He has a burst pipe. Being the landlord, and a builder, and having a son a plummer, he considers he ought to have exemption from bursts. One of the men told-Mama “The guvnor ain’t arf laying us all out jest because he’s treated like the rest of us by the frost.” It was freezing again going home last night. This morning there are 2 inches of snow everywhere, and was snowing hard up to the time I left home. However, it has turned to rain in London, the slush being choice, though I expect after Belgium you would think it positively dry.
I have only got one girl away ill now, and we are coping with the work beautifully.
Last night I got halfway through the second stocking of the second pair. Guess I had better make thinner stockings next for spring wear. Mrs. Taylor says’ she has sufficient socks for you for awhile. To-night I go to the dressmakers. There will be a piece of a moon, so it will not be too dark. You preferred it dark though, didn’t you?
I regularly wake up before 6.0. each morning, and then have beautiful daydreams till 7.0. Strange to say you are always mixed up in them. Then I do my physical jerks, but alas, am not any slenderer. Last time I slept with Mrs. Taylor she called me “Little Fatty”. Isn’t it too bad? I deserve a medal for my efforts to become genteel & willowy.
18. 1. 18.
Called at dressmakers last night, and got back home remarkably early compared with the time it used to take me. Finished reading “Where Love is” in the train. A rather queer tale. Will tell you about when I have time. This is my day of hindrances. Found a letter from Mrs. Taylor enclosing your card of 12th Dec. She says your Aunt Martha is dead. Really I think it is a good thing for the old lady. She had grown dreadfully obstinate, and I believe fell downstairs. Ethel is away with a bad cold; at least I go to business with colds heaps worse, but Ethel is sensible and believes in taking care of herself. I prefer someone else to take care of me. Did knitting last, night and hope to finish, my second pair of stockings to-night. If Ethel is alright on Sunday I will go to Balham again and stay the night.
What d-b you think of this idea for a honeymoon? Go for a tramp through counties near the sea, perhaps staying a day or so at a village if we like the look of it, of course carrying knapsacks. The month of May ought to be grand for that sort of thing.
Can’t stop longer, must now write to Mrs. Taylor. Goodbye.
May.
P.S. Weather awfully mild again, and the streams overflowing their banks. Is it as changeable in Germany? or do you know what to expect? One of our boys from the Front, the first to go from here, has just returned from France. He is most cheerful and says war will soon be over. According to the Bible I hear it will be over next month. Won’t it be grand to have you again!