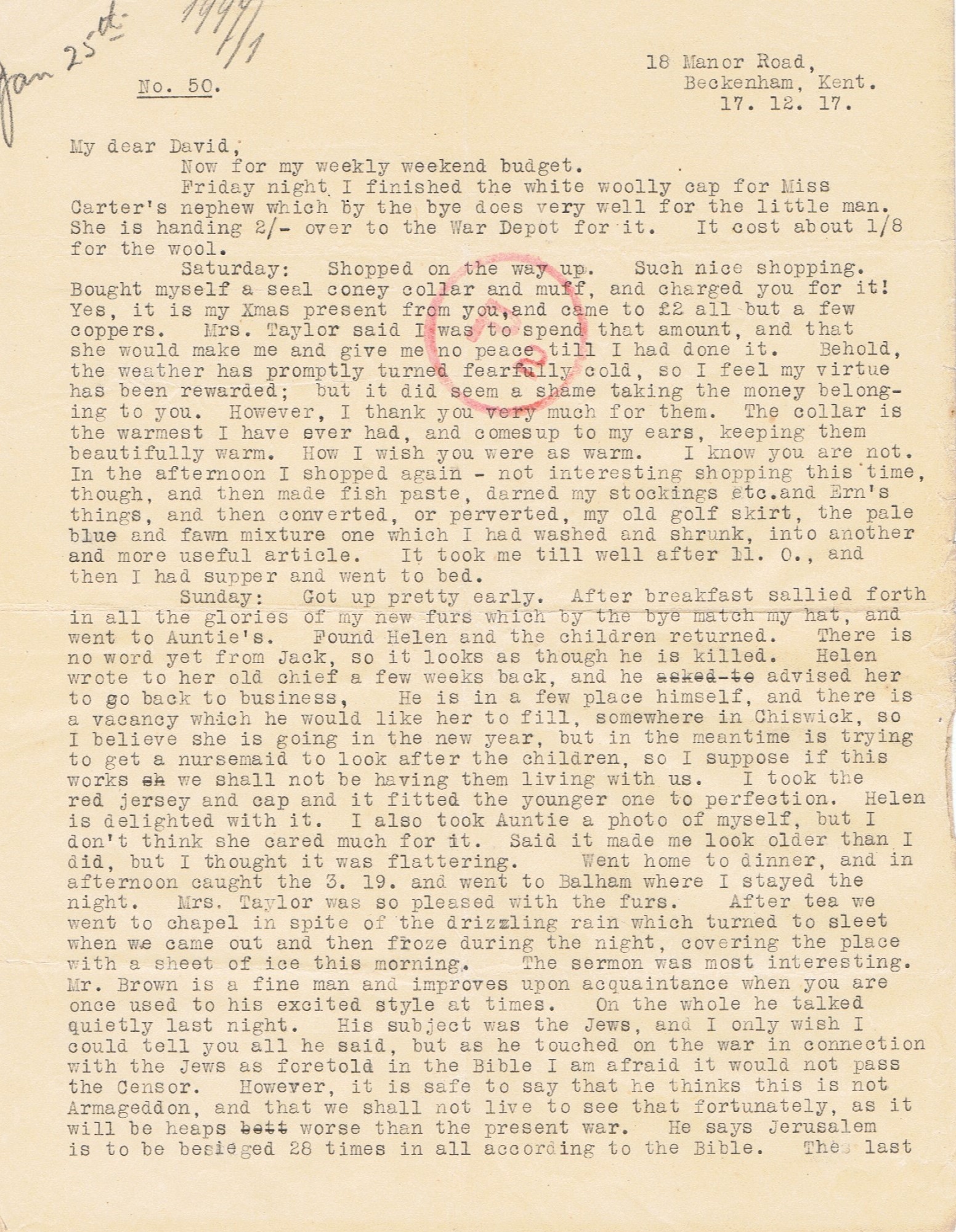 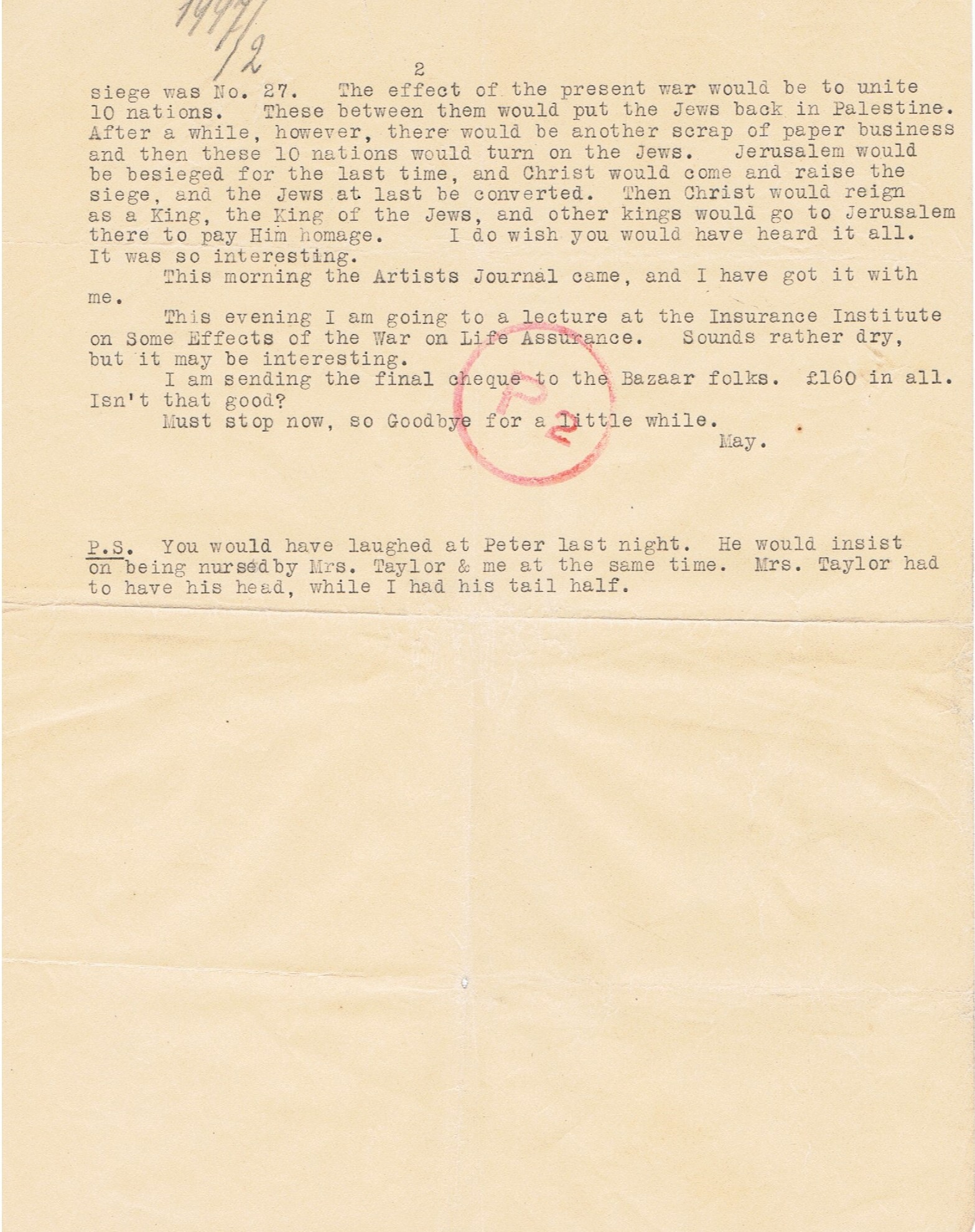 My dear David,
Now for my weekly weekend budget.
Friday night I finished the white woolly cap for Miss Carter’s nephew which by the bye does very well for the little man. She is handing 2/- over to the War Depot for it. It cost about 1/8 for the wool.
Saturday: Shopped on the way up. Such nice shopping. Bought myself a seal coney and muff, and charged you for it! Yes, it is my Xmas present from you, and came to £2 all but a few coppers. Mrs Taylor said I was to spend that amount, and that she would make me and give me no peace till I had done it. Behold, the weather has promptly turned fearfully cold, so I feel my virtue has been rewarded; but it did seem a shame taking the money belonging to you. However, I thank you very much for them. The collar is the warmest I have ever had, and comes up to my ears, keeping them beautifully warm. How I wish you were as warm. I know you are not. In the afternoon I shopped again – not interesting shopping this time, though, and then made fish paste, darned my stockings etc and Ern’s things, and then converted, or perverted, my old golf skirt, the pale blue and fawn mixture one which I had washed and shrunk, into another and more useful article. It took me till well after 11.0, and then I had supper and went to bed.
Sunday: Got up pretty early. After breakfast sallied forth in all the glories of my new furs which by the bye match my hat, and went to Auntie’s. Found Helen and the children returned. There is no word yet from Jack, so it looks as though he is killed. Helen wrote to her old chief a few weeks back, and he advised her to go back to business. He is in a few place himself, and there is a vacancy which he would like her to fill, somewhere in Chiswick, so I believe she is going in the new year, but in the meantime is trying to get a nursemaid to look after the children, so I suppose if this works we shall not be having them living with us. I took the red jersey and cap and it fitted the younger one to perfection. Helen is delighted with it. I also took Auntie a photo of myself, but I don’t think she cared much for it. Said it made me looked older than I did, but I thought it was flattering. Went home to dinner, and in afternoon caught the 3.19 and went to Balham where I stayed the night. Mrs Taylor was so pleased with the furs. After tea we went to chapel in spite of the drizzling rain which turned to sleet when we came out and then froze during the night, covering the place with a sheet of ice this morning. The sermon was most interesting. Mr Brown is a fine man and improves upon acquaintance when you are once used to his excited style at times. On the whole he talked quietly last night. His subject was the Jews, and I only wish I could tell you all he said, but as he touched on the war in connection with the Jews as foretold in the Bible I am afraid it would not pass the Censor. However, it is safe to say that he thinks this is not the Armageddon, and that we shall not live to see that fortunately, as it will be heaps worse than the present war. He says Jerusalem is to be besieged 28 times in all according to the Bible. The last siege was No. 27. The effect of the present war would be to unite 10 nations. These between them would put the Jews back in Palestine. After a while, however, there would be another scrap of paper business and then these 10 nations would turn on the Jews. Jerusalem would be besieged for the last time, and Christ would come and raise the siege, and the Jews at last be converted. Then Christ would reign as a King, the King of the Jews, and other kings would go to Jerusalem there to pay Him homage. I do wish you would have heard it all. It was so interesting.
This morning the Artists Journal came, and I have got it with me.
This evening I am going to a lecture at the Insurance Institute on Some Effects of the War on Life Assurance. Sounds rather dry, but it may be interesting.
I am sending the final cheque to the Bazaar folks. £160 in all. Isn’t that good?
Must stop now, so Goodbye for a little while.
May
P.S. You would have laughed at Peter last night. He would insist on being nursed by Mrs Taylor and me at the same time. Mrs Taylor had to have his head, while I had his tail half.