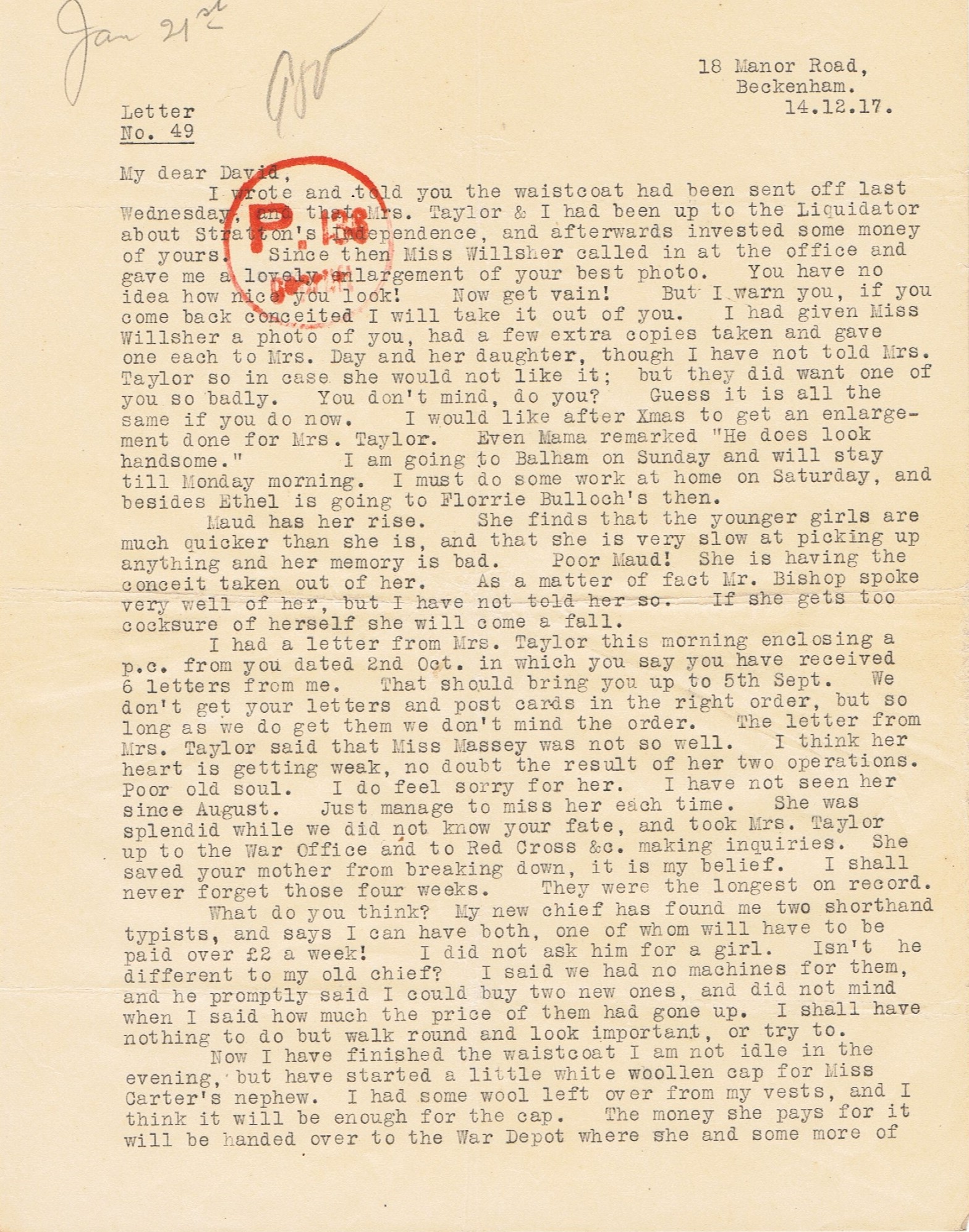 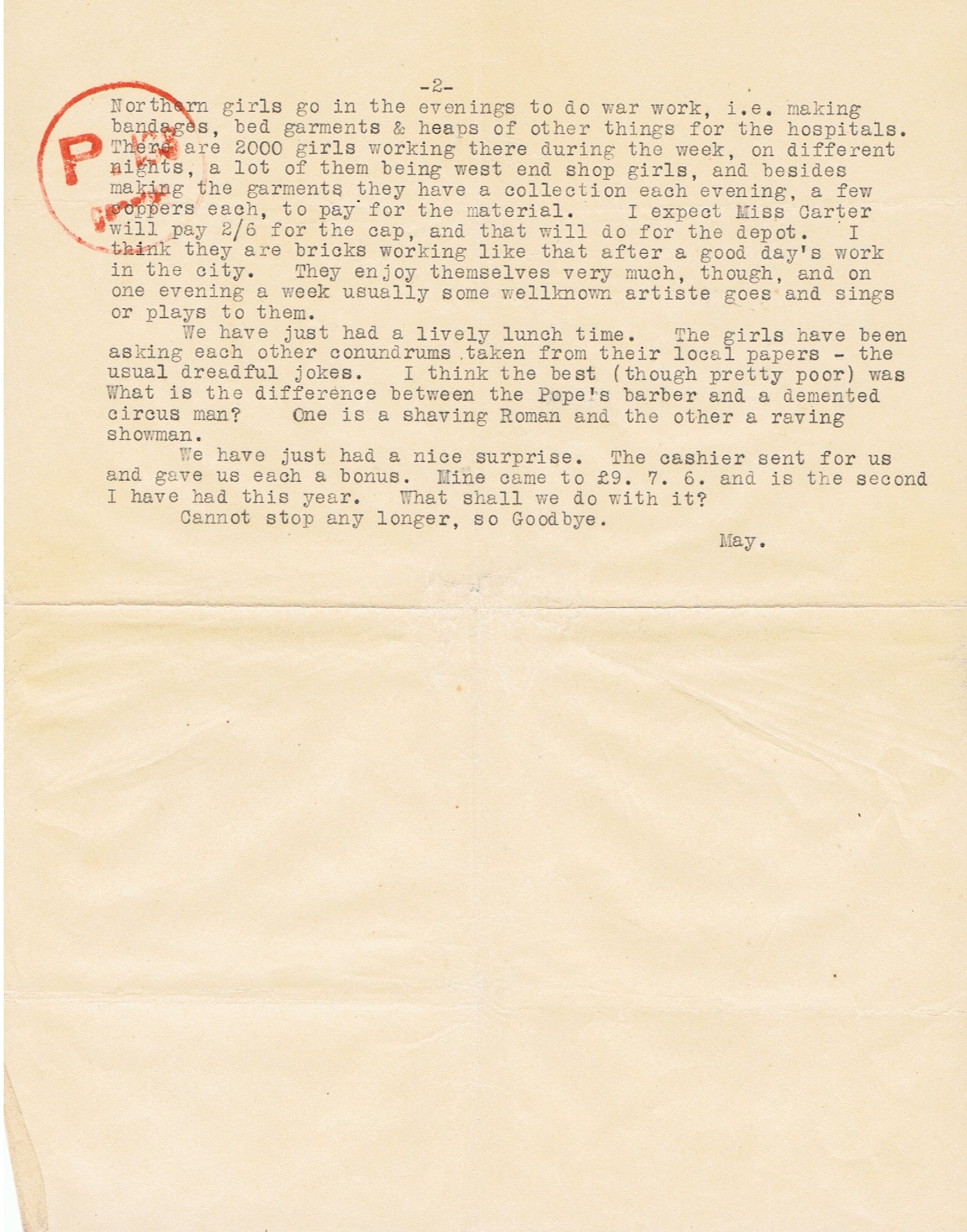 May to David Beckenham 14.12.17 Letter No. 49
My dear David,
I wrote and told you the waistcoat had been sent off last Wednesday, and that Mrs Taylor and I had been up to the Liquidator about Stratton’s Independence, and afterwards invested some money of yours. Since then Miss Willsher called in at the office and gave me a lovely enlargement of your best photo. You have no idea how nice you look! Now get vain! But I warn you, if you come back conceited I will take it out of you. I had given Miss Willsher a photo of you, had a few extra copies taken and gave one each to Mrs Day and her daughter, though I have not told Mrs Taylor so in case she would not like it; but they did want one of you so badly. You don’t mind, do you? Guess it is all the same if you do now. I would like after Xmas to get an enlargement done for Mrs Taylor. Even Mama remarked “He does look handsome.” I am going to Balham on Sunday and will stay till Monday morning. I must do some work at home on Saturday, and besides Ethel is going to Florrie Bulloch’s then.
Maud has her rise. She finds that the younger girls are much quicker than she is, and that she is very slow at picking up anything and her memory is bad. Poor Maud! She is having the conceit taken out of her. As a matter of fact Mr Bishop spoke very well of her, but I have not told her so. If she gets too cocksure of herself she will come a fall.
I had a letter from Mrs Taylor this morning enclosing a p.c. from you dated 2nd Oct in which you say you have received 6 letters from me. That should bring you up to 5th Sept. We don’t get your letters and post cards in the right order, but so long as we do get them we don’t mind the order. The letter from Mrs Taylor said that Miss Massey was not so well. I think her heart is getting weak, no doubt the result of her two operations. Poor old soul. I do feel sorry for her. I have not seen her since August. Just manage to miss her each time. She was splendid while we did not know your fate, and took Mrs Taylor up to the War Office and to Red Cross etc making enquiries. She saved your mother from breaking down, it is my belief. I shall never forget those four weeks. They were the longest on record.
What do you think? Mt new chief has found me two shorthand typists, and says I can have both, one of whom will have to be paid over £2 a week! I did not ask him for a girl. Isn’t he different to my old chief? I said we had no machines for them, and he promptly said I could buy two new ones, and did not mind when I said how much the price of them had gone up. I shall have nothing to do but walk round and look important, or try to.
Now I have finished the waistcoat I am not idle in the evening, but have started a little white woollen cap for Miss Carter’s nephew. I had some wool left over from my vests, and I think it will be enough for the cap. The money she pays for it will be handed over to the War Depot where she and some more of Northern girls go in the evenings to do war work, i.e. making bandages, bed garments and heaps of other things for the hospitals. There are 2000 girls working there during the week, on different nights, a lot of them being west end shop girls, and besides making the garments they have a collection each evening, a few coppers each, to pay for the material. I expect Miss Carter will pay 2/6 for the cap, and that will do for the depot. I think they are bricks working like that after a good day’s work in the city. They enjoy themselves very much, though, and on one evening a week usually some well known artiste goes and sings or plays to them.
We have just had a lively lunch time. The girls have been asking each other conundrums taken from their local papers – the usual dreadful jokes. I think the best (though pretty poor) was What is the difference between the Pope’s barber and a demented circus man? One is a shaving Roman and the other a raving showman.
We have just had a nice surprise. The cashier sent for us and gave us each a bonus. Mine came to £9.7.6. and is the second I have had this year. What shall we do with it?
Cannot stop any longer, so Goodbye.
May