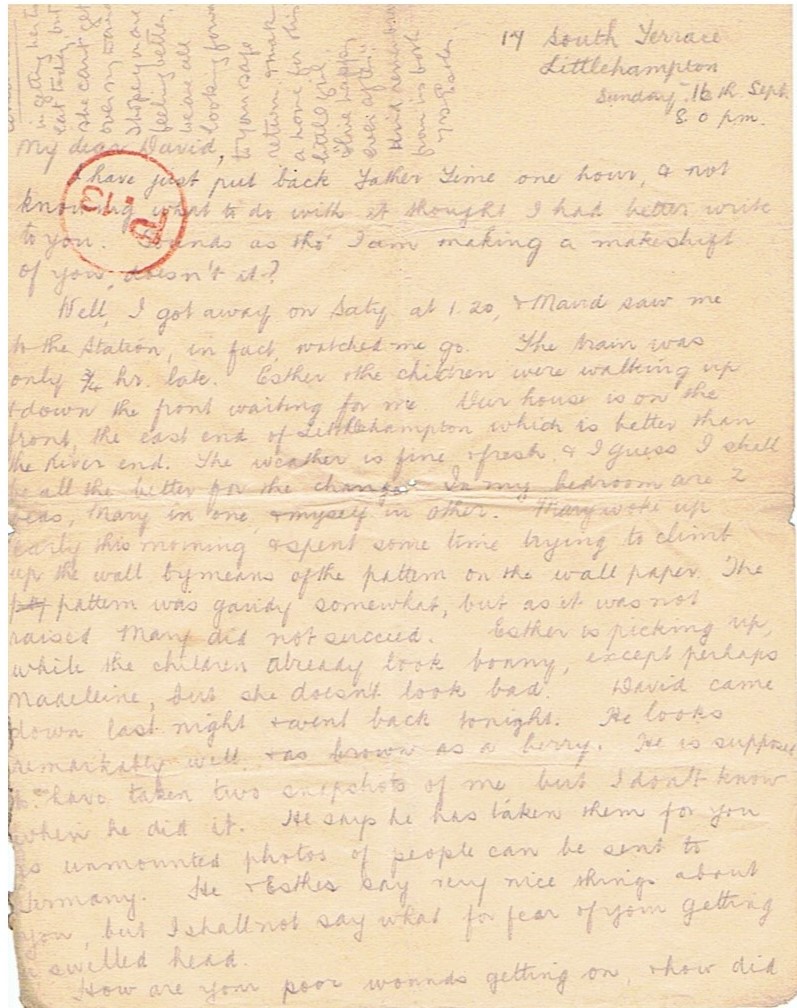 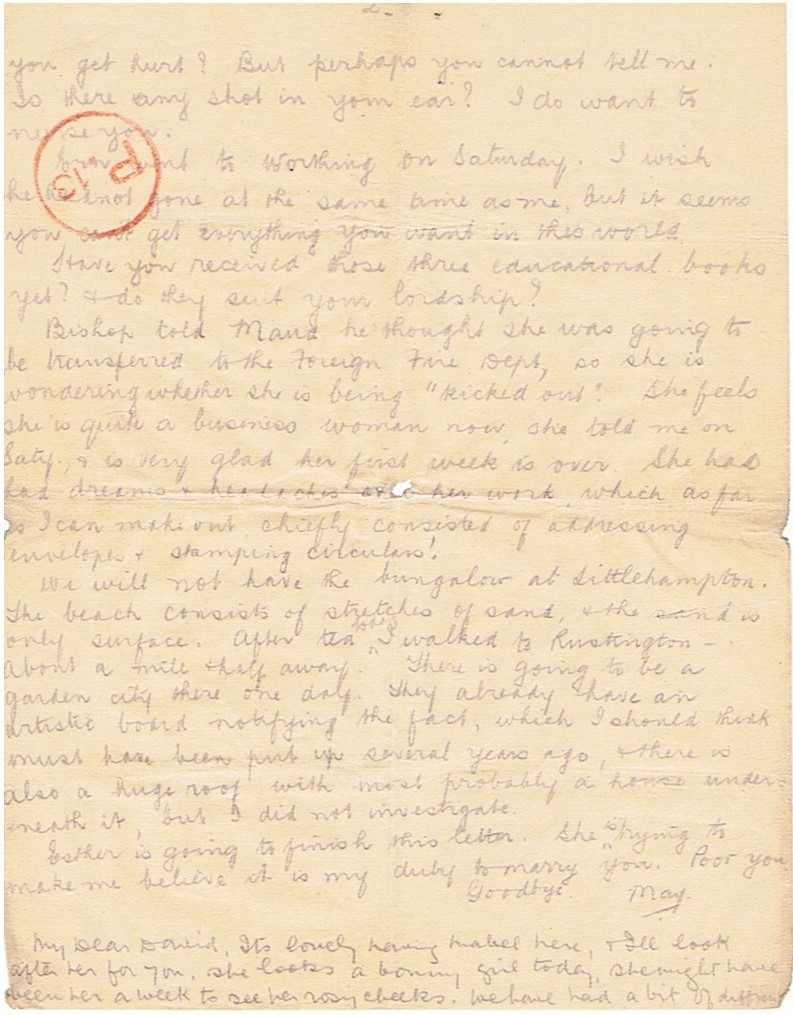 I have just put back Father Time one hour, and not knowing what to do with it I thought I had better write to you. Sounds as tho’ I am making a makeshift of you, doesn’t it?

Well, I got away on Saturday at 1.20, and Maud saw me to the station, in fact, watched me go. The train was only ¾ hour late. Esther and the children were walking up and down the front waiting for me. Our house is on the front, the east end of Littlehampton which is better than the River end. The weather is fine and fresh, and I guess I shall be all the better for the change. In my bedroom are 2 beds, Mary in one, and myself in the other. Mary woke up early this morning and spent some time trying to climb up the wall by means of the pattern on the wall paper. The pattern was gaudy somewhat, but as it was not raised Mary did not succeed. Esther is picking up, while the children already look bonny, except perhaps Madeleine, but she doesn’t look bad. David came down last night and went back tonight. He looks remarkably well, and as brown as a berry. He is supposed to have taken two snapshots of me, but I don’t know when he did it. He says he has taken them for you as unmounted photos of people can be sent to Germany. He and Esther say very nice things about you, but I shall not say what for fear of your getting a swelled head.

How are your poor wounds getting on, and how did you get hurt? But perhaps you cannot tell me. Is there any shot in your ear? I do want to nurse you.

Ern went to Worthing on Saturday, I wish he had not gone at the same time as me, but it seems you can’t get everything you want in this world.

Have you received those three educational books yet? And do they suit your lordship?

Bishop told Maud he thought she was going to be transferred to the Foreign Fire Dept, so she is wondering whether she is being “kicked out”. She feels she is quite a business woman now, she told me on Saturday, and is very glad her first week is over. She had dreams and headaches over her work, which as far as I can make out chiefly consisted of addressing envelopes and stamping circulars!

We will not have the bungalow at Littlehampton. The beach consists of stretches of sand, and the sand is only surface. After tea today I walked to Rustington – about a mile and a half away. There is going to be a garden city there one day. They already have an artistic board notifying the fact, which I should think must have been put up several years ago, and there is also a huge roof with most probably a house underneath it, but I did not investigate.

Esther is going to finish this letter. She is trying to make me believe it is my duty to marry you. Poor you.

My Dear David, It is lovely having Mabel here, and I shall look after her for you. She looks a bonny girl today, she might have been here a week to see her rosy cheeks. We have had a bit of difficulty in getting her to eat today, but she can’t get over my David. I hope you are feeing better, we all looking forward to your safe return and making a home for this little girl, and “live happily ever after”.

Kind remembrances from us both, Yours Esther