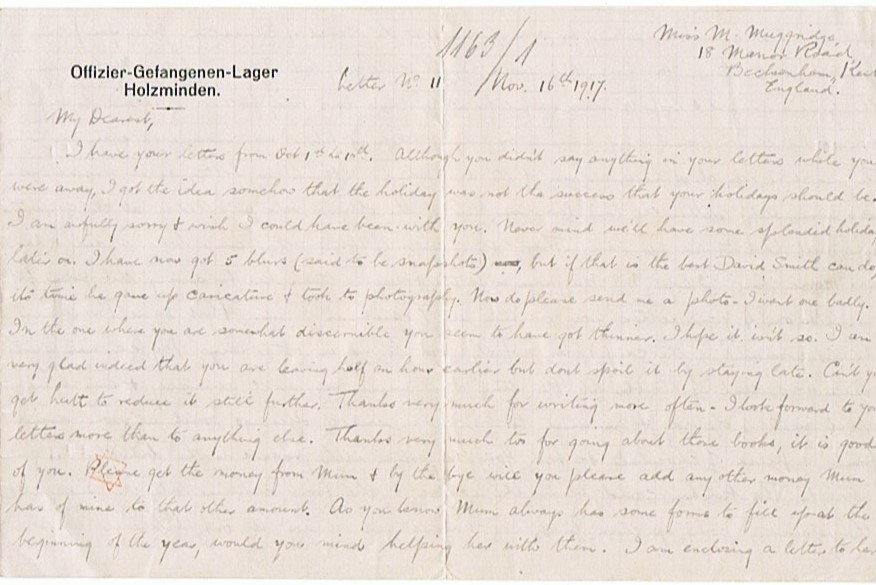 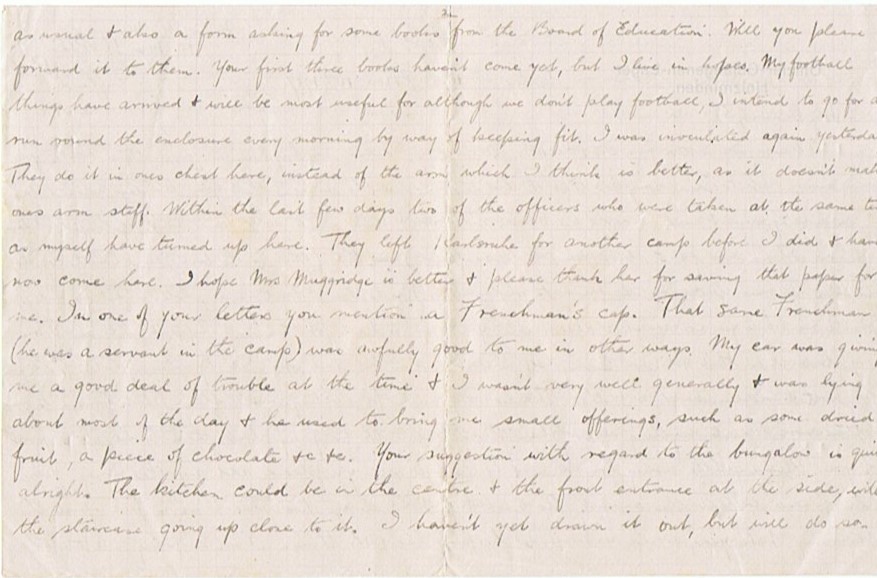 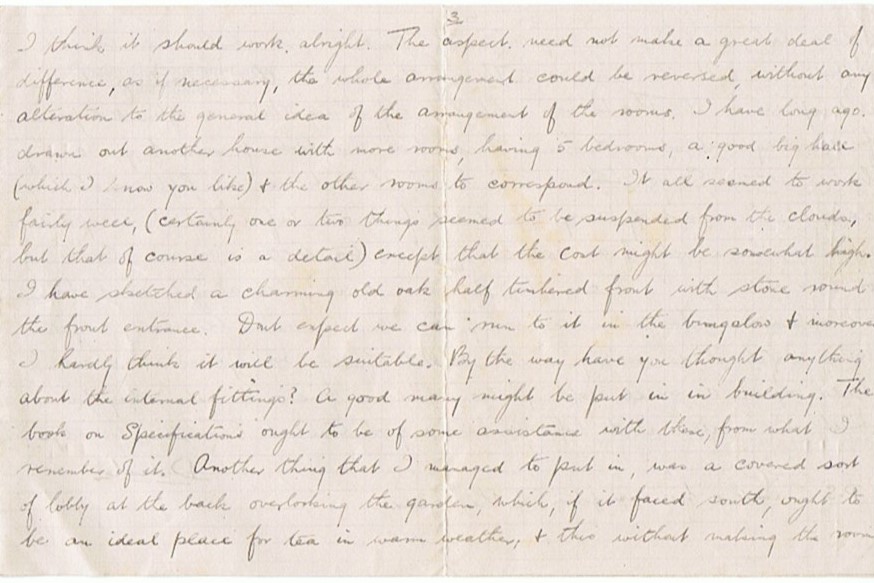 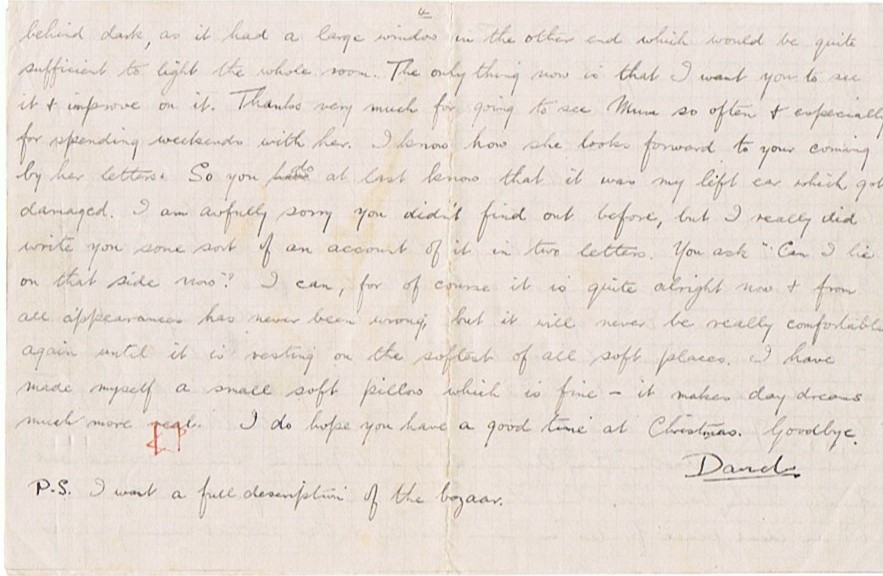 I have your letters from October 1st to 10th. Although you didn’t say anything in your letters while you were away, I got the idea somehow that the holiday was not the success that your holiday should be. I am awfully sorry and wish I could have been with you. Never mind we’ll have some splendid holidays later on. I have now got 5 blurs (said to be snapshots), but if that is the best David Smith can do, its time he gave up caricature and took to photography. Now do please send me a photo. I want one badly. In the one where you are somewhat discernible you seem to have got thinner. I hope it isn’t so. I am very glad indeed that you are leaving half an hour earlier but don’t spoil it by staying late. Can’t you get Lutt to reduce it still further. Thanks very much for writing more often – I look forward to your letters more than to anything else.

Thanks very much too for going about those books, it is good of you. Please get the money from Mum and by the bye will you please add any other money Mum has of mine to that other amount. As you know Mum always has some forms to fill up at the beginning of the year, would you mind helping her with them. I am enclosing a letter to her as usual and also a form asking for some books from the Board of Education. Will you please forward it to them. Your first three books haven’t come yet, but I live in hopes.

My football things have arrived and will be most useful for although we don’t play football, I intend to go for a run round the enclosure every morning by way of keeping fit.

I was inoculated again yesterday. They do it in one’s chest here, instead of the arm which I think is better, as it doesn’t make one’s arm stiff.

Within the last few days two of the officers who were taken at the same time a myself have turned up here. They left Karlsruhe for another camp before I did and have now come here.

I hope Mrs. Muggridge is better and please thank her for saving that paper for me. In one of your letters you mention a Frenchman’s cap. That same Frenchman (he was a servant in the camp) was awfully good to me in other ways. My ear was giving me a good deal of trouble at the time and I wasn’t very well generally and was lying about most of the day and he used to bring me small offerings, such as some dried fruit, a piece of chocolate etc. etc.

Your suggestion with regard to the bungalow is quite alright. The kitchen could be in the centre and the front entrance at the side, with the staircase going up close to it. I haven’t yet drawn it out, but will do so. I think it should work alright. The aspect need not make a great deal of difference, as if necessary, the whole arrangement could be reversed, without any alteration to the general idea of the arrangement of the rooms. I have long ago drawn out another house with more rooms, having 5 bedrooms, a good big hall (which I know you like) and the other rooms to correspond. It all seemed to work fairly well, (certainly one or two things seemed to be suspended from the clouds, but that of course is a detail)) except that the cost might be somewhat high.

I have sketched a charming old oak half timbered front with stone round the front entrance. Don’t expect we can run to it in the bungalow and moreover I hardly think it will be suitable. By the way have you thought anything about the internal fittings? A good many might be put in in building. The book on Specifications ought to be of some assistance with these, from what I remember of it. Another thing that I managed to put in, was a covered sort of lobby at the back overlooking the garden, which, if it faced south, ought to be an ideal place for tea in warm weather and this without making the room behind dark, as it had a large window in the other end which would be quite sufficient to light the whole room. The only thing now is that I want you to see it and improve on it.

Thanks very much for going to see Mum so often and especially for spending weekends with her. I know how she looks forward to your coming by her letters. So you do at least know that it was my left ear which got damaged, I am awfully sorry you didn’t find out before, but I really did write you some sort of an account of it in two letters. You ask “Can I lie on that side now?” I can, for of course it is quite alright now and from all appearances has never been wrong but it will never be really comfortable again until it is resting on the softest of all soft places. I have made myself a small soft pillow which is fine – it makes day dreams much more real. I do hope you have a good time at Christmas. Goodbye.

P.S. I want a full description of the bazaar.