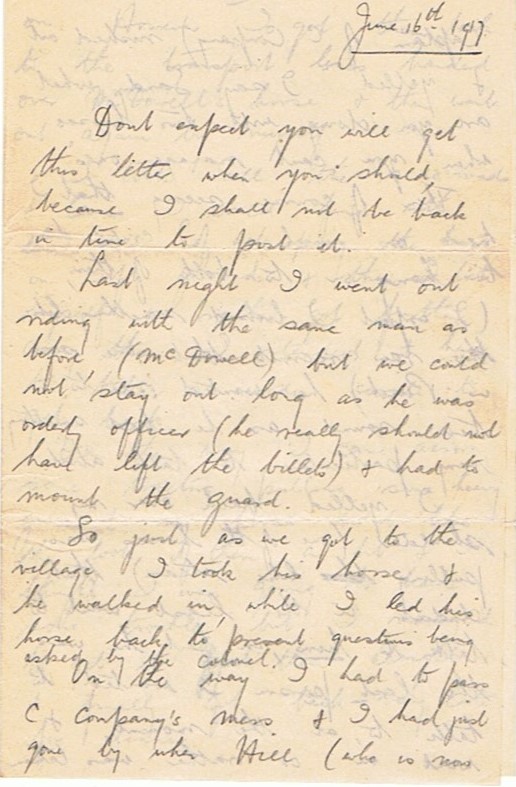 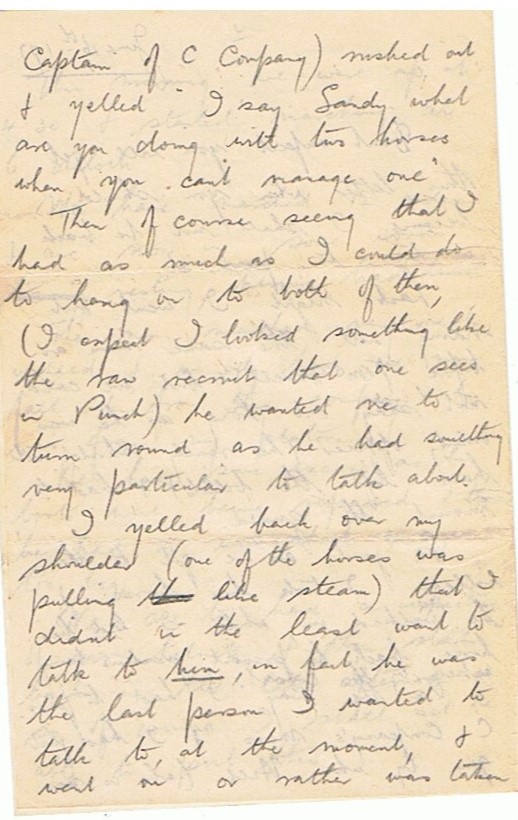 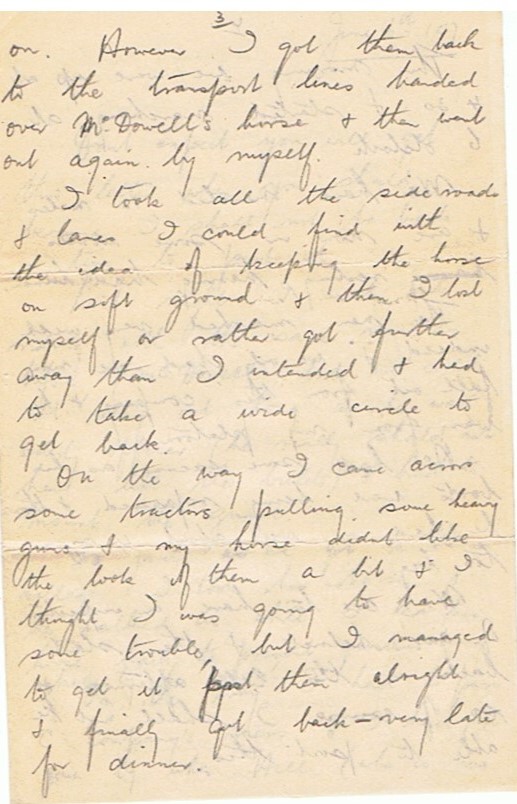 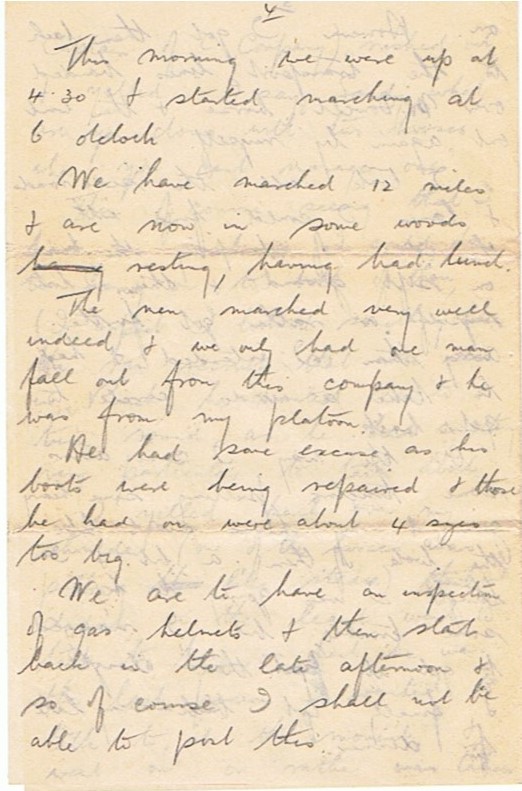 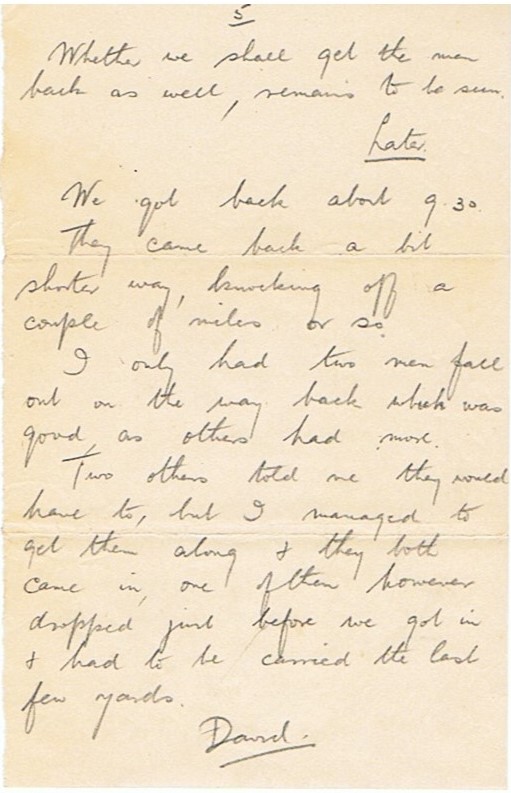 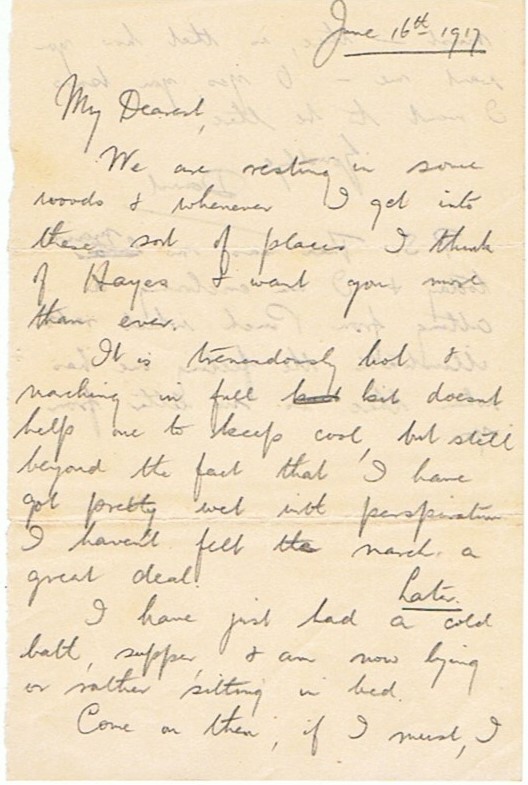 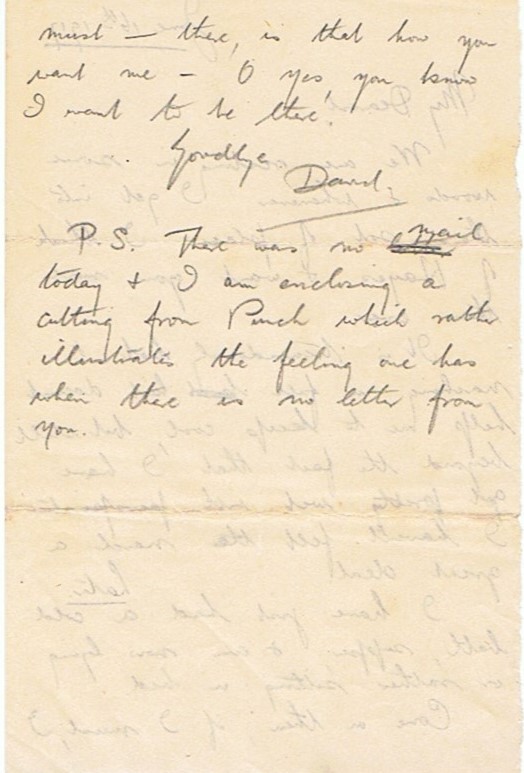 Don’t expect you will get this letter when you should, because I shall not be back in time to post it.

Last night I went out riding with the same man as before, (McDowell) but we could not stay out long as he was orderly officer (he really should not have left the billets) and had to mount the guard.

So just as we got to the village I took his horse and he walked in while I led his horse back to prevent questions being asked by the colonel.

On the way I had to pass C Company’s mess and I had just gone by when Hill (who is now Captain of C Company) rushed out and yelled “I say Sandy what are you doing with two horses when you cant manage one”.

Then of course seeing that I had as much as I could do to hang on to both of them, (I expect I looked something like the raw recruit that one sees in Punch) he wanted me to turn round as he had something very particular to talk about.

I yelled back over my shoulder (one of the horses was pulling like steam) that I didn’t in the least want to talk to him, in fact he was the last person I wanted to talk to, at the moment, and went on or rather was taken on. However, I got them back to the transport lines handed over McDowell’s horse and then went out again by myself. I took all the side roads and lanes I could find with the idea of keeping the horse on soft ground and then I lost myself or rather got further away than I intended and had to take a wide circle to get back. On the way I came across some tractors pulling some heavy guns and my horse didn’t like the look of them a bit and I thought I was going to have some trouble, but I managed to get it past them alright and finally got back – very late for dinner.

This morning we were up at 4.30 and started marching at 6 o’clock. We have marched 12 miles and are now in some woods resting, having had lunch.

The men marched very well indeed and we only had one man fall out from this company and he was from my platoon. He had some excuse as his boots were being repaired and those he had on were about 4 sizes too big.

We are to have an inspection of gas helmets and then start back in the later afternoon and so of course I shall not be able to post this.

Whether we shall get the men back as well, remains to be seen.

We got back about 9.30. They came back a bit shorter way, knocking off a couple of miles or so. I only had two men fall out on the way back which was good as others had more. Two others told me they would have to, but I managed to get them along and they both came in, one of them however dropped just before we got in and had to be carried the last few yards.

We are resting in some woods and whenever I get into these sort of places I think of Hayes and want you more than ever.

It is tremendously hot and marching in full kit doesn’t help one to keep cool, but still beyond the fact that I have got pretty wet with perspiration I haven’t felt the march a great deal.

I have just had a cold bath, supper, and am now lying or rather sitting in bed.

P.S. There was no mail today and I am enclosing a cutting from Punch which rather illustrates the feeling one has when there is no letter from you.