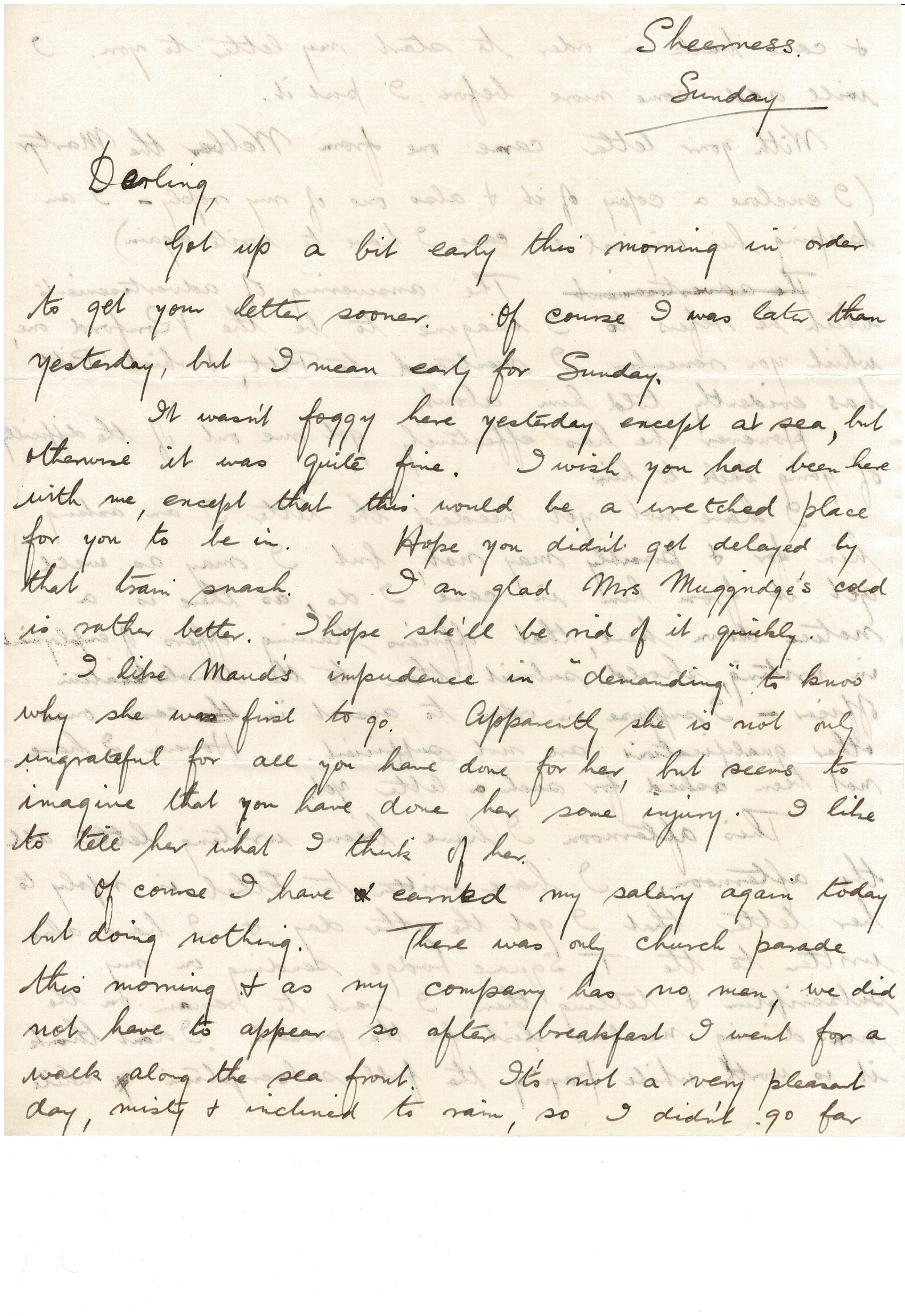 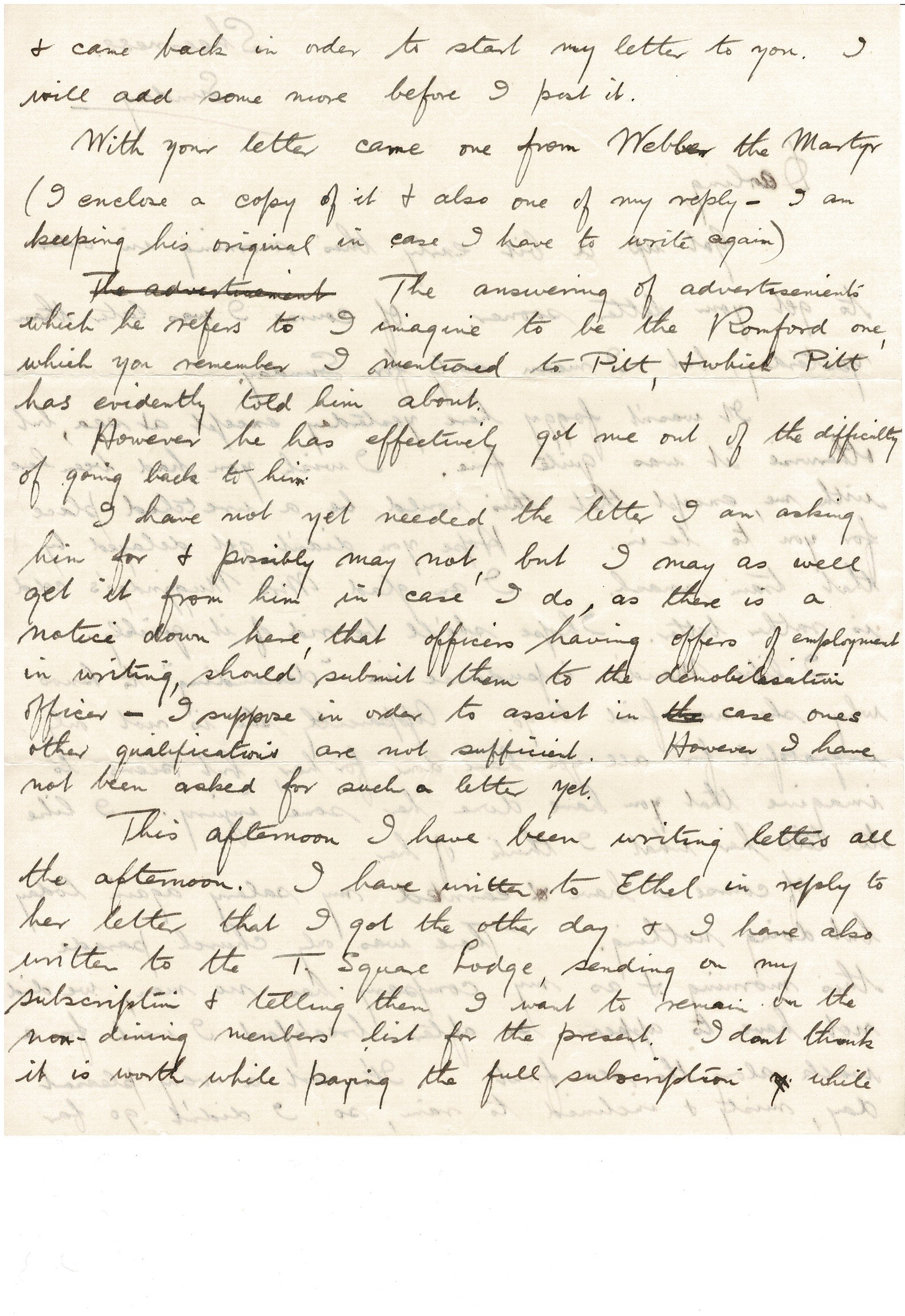 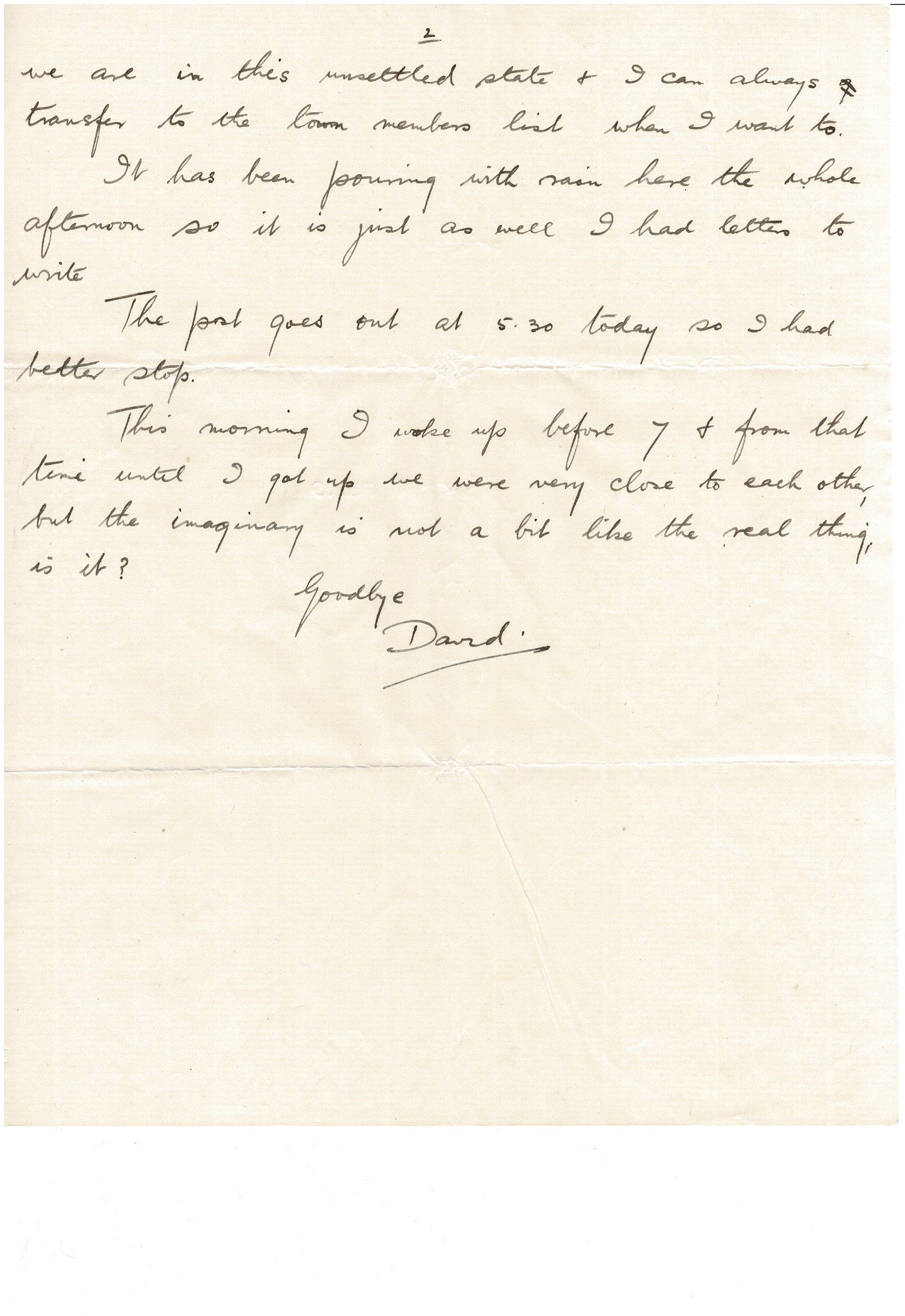 Got up a bit early this morning in order to get your letter sooner. Of course I was later than yesterday, but I mean early for Sunday.

It wasn’t foggy here yesterday except at sea, but otherwise it was quite fine. I wish you had been here with me, except that this would be a wretched place for you to be in. Hope you didn’t get delayed by that train smash. I’m glad Mrs Muggridge’s cold is rather better. I hope she’ll be rid of it quickly.

I like Maud’s impudence in “demanding” to know why she was first to go. Apparently she is not only ungrateful for all you have done for her, but seems to imagine that you have done her some injury. I like to tell her what I think of her.

Of course I have earned my salary again today but doing nothing. There was only church parade this morning & as my Company has no men, we did not have to appear so after breakfast I went for a walk along the sea front. It’s not a very pleasant day, misty & inclined to rain, so I didn’t go far & came back in order to start my letter to you. I will add some more before I post it.

With your letter came one from Webber the Martyr (I enclose a copy of it & also one of my reply – I am keeping his original in case I have to write again).

The answering or advertisements which he refers to I imagine to be the Romford one, which you remember I mentioned to Pitt, & which Pitt has evidently told him about.

However he has effectively got me out of the difficulty of going back to him.

I have not yet needed the letter I am asking him for & possibly may not, but I may as well get it from him in case I do, as there is a notice down here, that officers having offers of employment in writing, should submit them to the demobilisation  officer – I suppose in order to assist in case ones other qualifications are not sufficient. However I have not been asked for such a letter yet.

This afternoon I have been writing letters all the afternoon. I have written to Ethel in reply to her letter that I got the other day & I have also written to the T Square Lodge, sending on my subscription & telling them I want to remain on the non-dining members list for the present. I don’t think it is worth while paying the full subscription while we are in this unsettled state & I can always transfer to the town members list when I want to.

It has been pouring with rain here the whole afternoon so it is just as well I had letters to write.

This morning I woke up before 7 & from that time until I got up we were very close to each other, but the imagining is not a bit like the real thing is it?