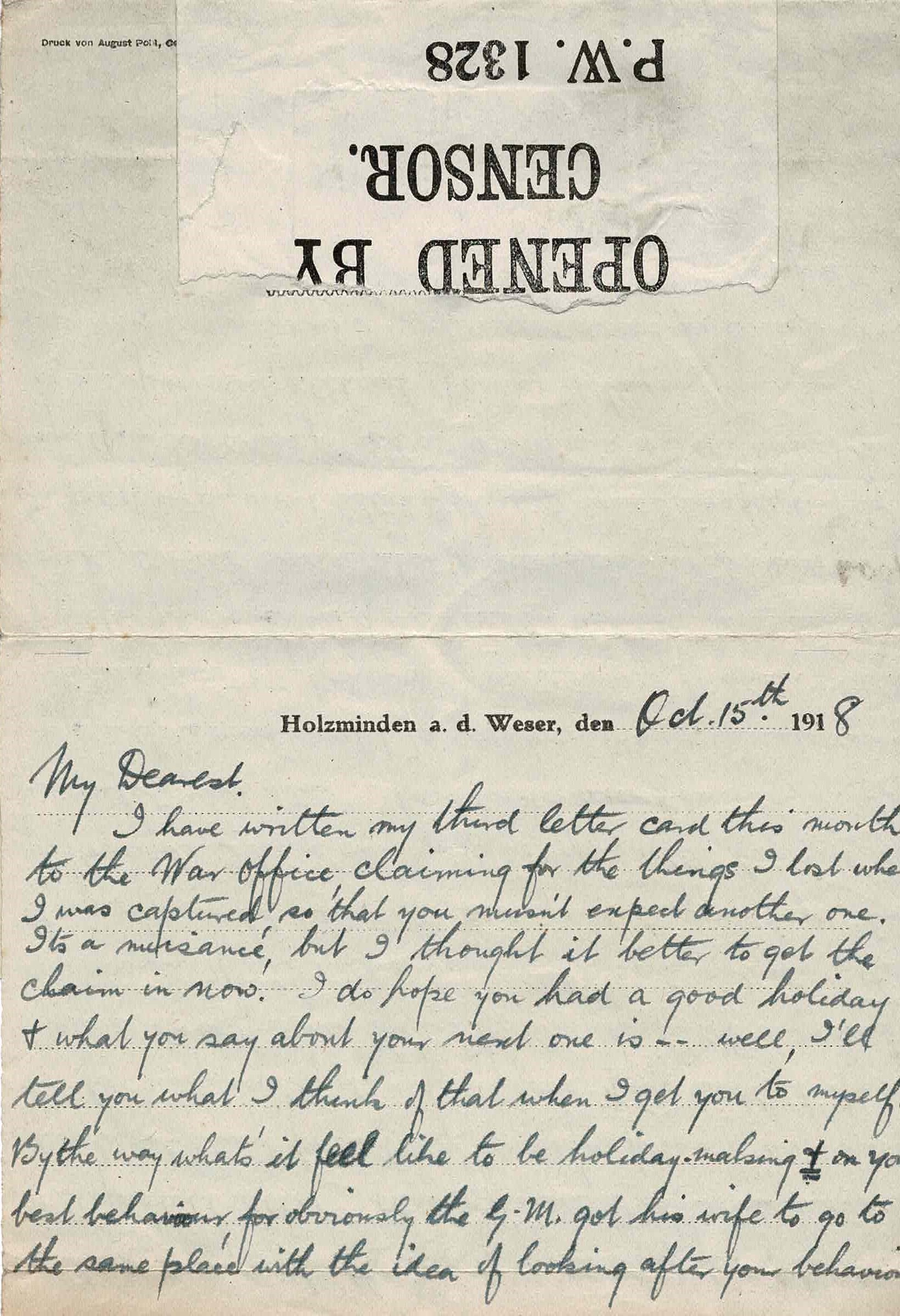 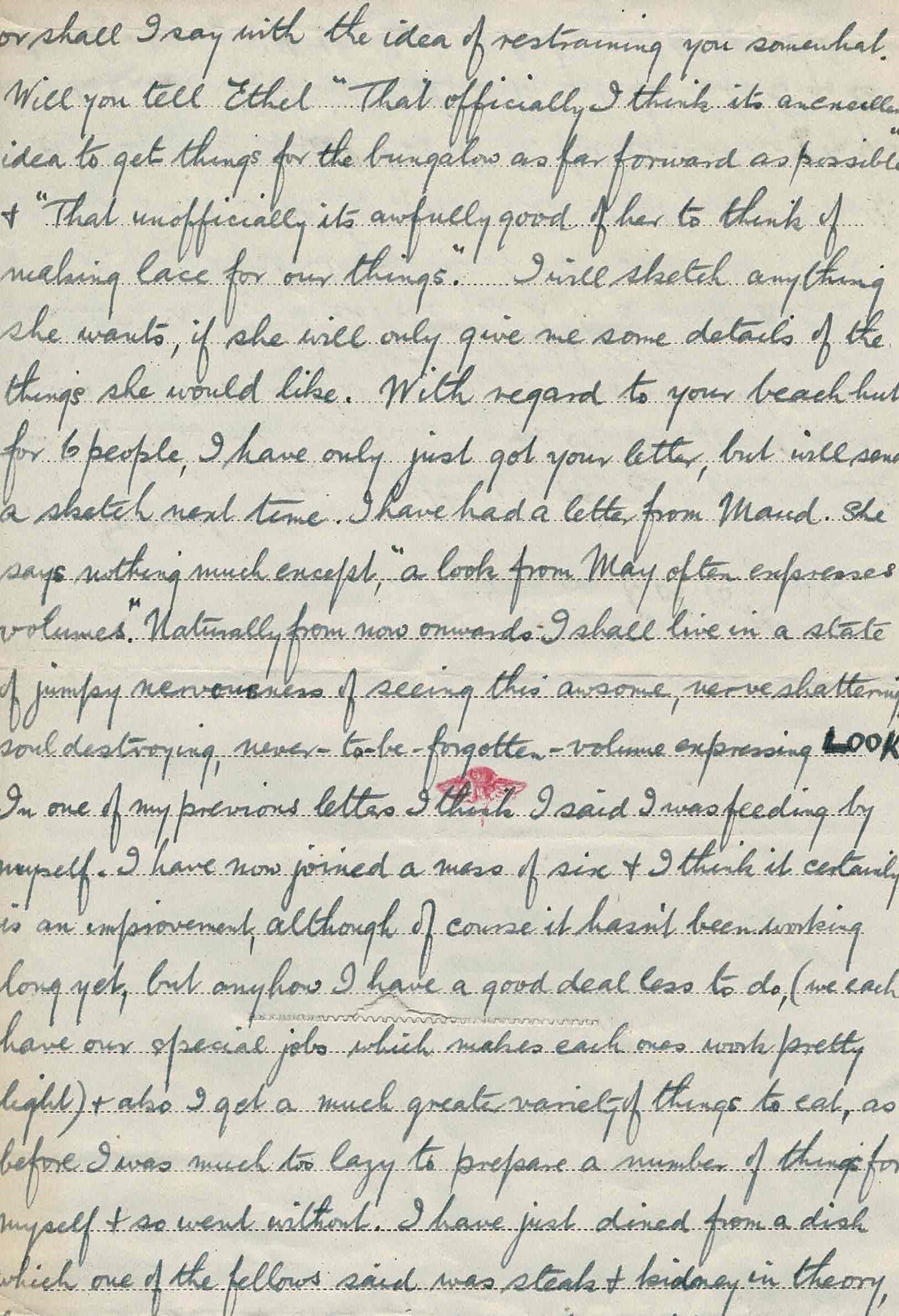 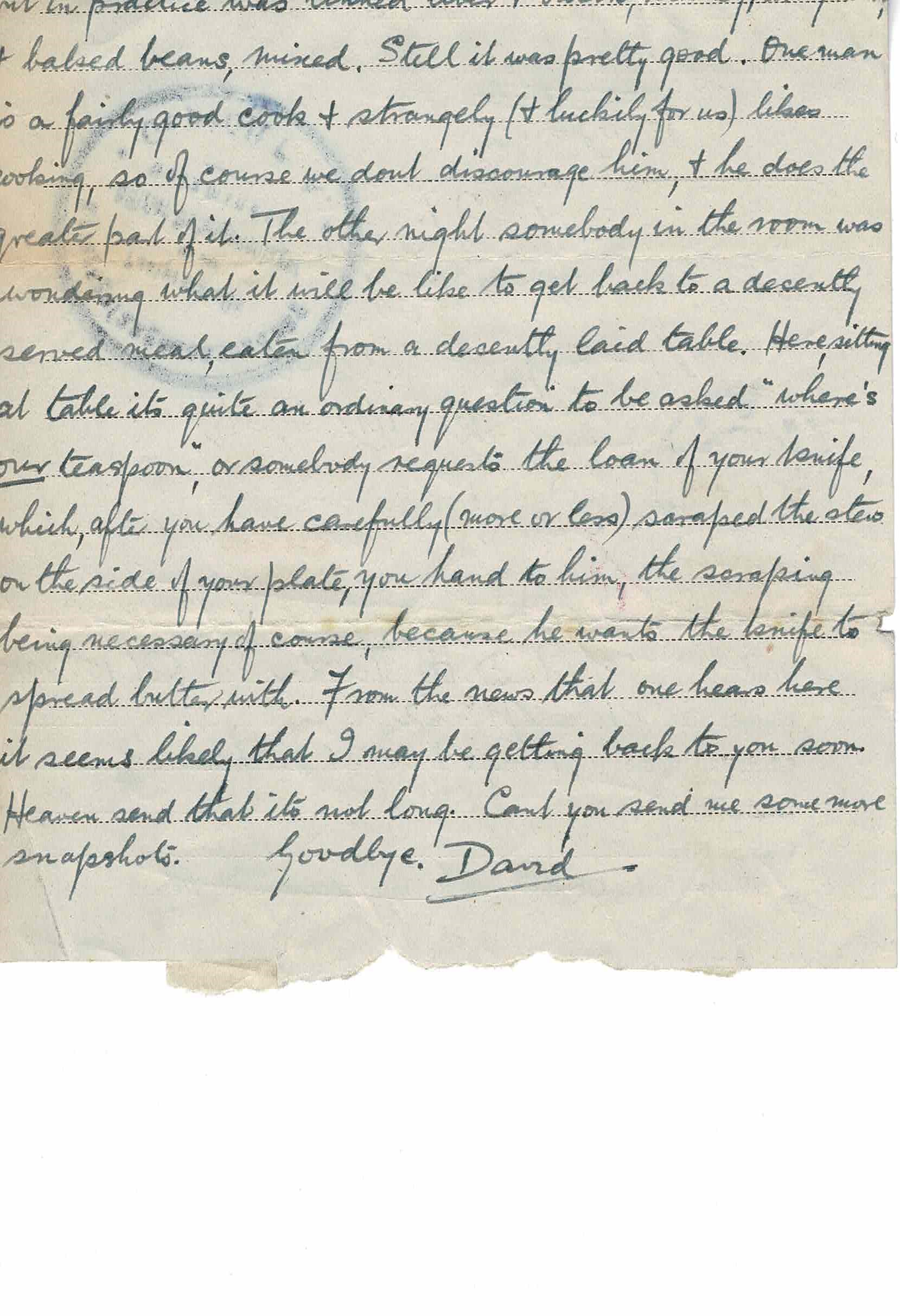 I have written my third letter card this month to the War Office, claiming for the things I lost when I was captured, so that you mustn’t expect another one. Its a nuisance, but I thought it better to get the claim in now. I do hope you had a good holiday & what you say about your next one…well, I’ll tell you what I think of that when I get you to myself. By the way what’s it feel like to be holiday making & on your best behaviour, for obviously the G.M. got his wife to go to the same place with the idea of looking after your behaviour or shall I say with the idea of restraining you somewhat. Will you tell Ethel “That officially I think its an excellent idea to get things for the bungalow as far forward as possible” & “That unofficially its awfully good of her to think of making lace for our things”. I will sketch anything she wants, if she will only give me some details of the things she would like. With regard to your beach hut for 6 people, I have only just got your letter, but will send a sketch next time. I have had a letter from Maud. She says nothing except, “a look from May often expresses volumes”. Naturally from now onwards I shall live in a state of jumpy nervousness of seeing this awesome, nerve shattering, soul destroying, never-to-be-forgotten-volume expressing LOOK.

In one of my previous letters I think I said I was feeding by myself. I have now joined a mess of six & I think it certainly is an improvement, although of course it hasn’t been working long yet, but anyhow I have a good deal less to do, (we each have our special jobs which makes each ones work pretty light) & also I get a much greater variety of things to eat, as before I was much too lazy to prepare a number of things for myself & so went without. I have just dined from a dish which one of the fellows said was steak & kidney in theory, but in practice was tinned liver & bacon, kidney, army ration & baked beans mixed. Still it was pretty good. One man is a fairly good cook & strangely (& luckily for us) likes cooking, so of course we don’t discourage him, & he does the greater part of it. The other night somebody in the room was wondering what it will be like to get back to a decently served meal, eaten from a decently laid table. Here, sitting at table its quite an ordinary question to be asked “where’s our teaspoon”, or somebody requests the loan of your knife, which, after you have carefully (more or less) scraped the stew on the side of your plate, you hand him, the scraping being necessary of course, because he wants the knife to spread butter with. From the news that one hears here it seems likely that I may be getting back to you soon. Heaven send that its not long. Can’t you send me some more snapshots.