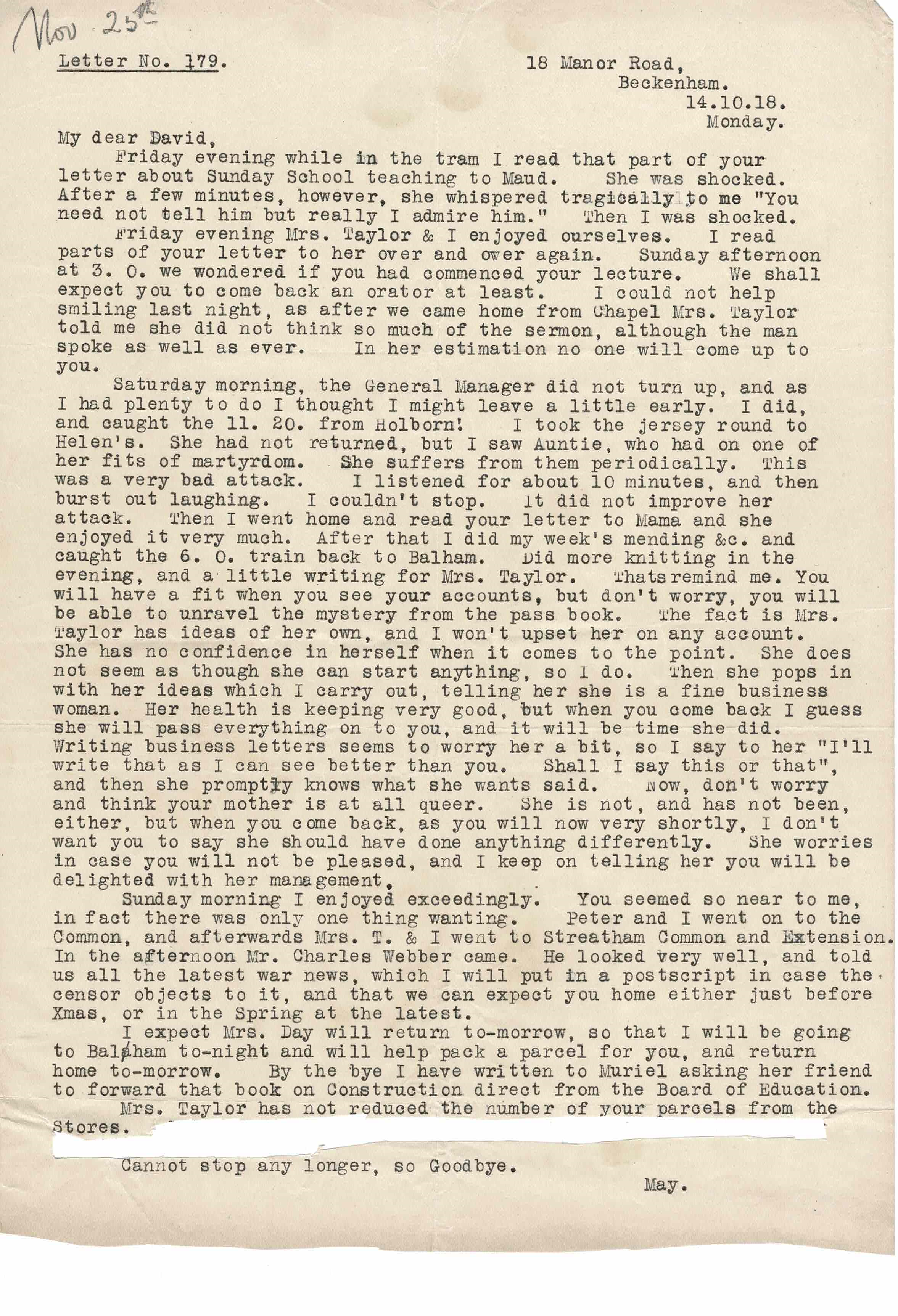 Friday evening while in the tram I read that part of your letter about Sunday School teaching to Maud. She was shocked. After a few minutes, however, she whispered tragically to me “You need not tell him but really I admire him.” Then I was shocked.

Friday evening Mrs Taylor & I enjoyed ourselves. I read parts of your letter to her over and over again. Sunday afternoon at 3.0 we wondered if you had commenced your lecture. We shall expect you to come back an orator at least. I could not help smiling last night, as after we came home from Chapel Mrs Taylor told me she did not think so much of the sermon, although the man spoke as well as ever. In her estimation no one will come up to you.

Saturday morning, the General Manager did not turn up, and as I had plenty to do I thought I might leave a little early. I did, and caught the 11.20 from Holborn! I took the jersey round to Helen’s. She had not returned, but I saw Auntie, who had on one of her fits of martyrdom. She suffers from them periodically. This was a very bad attack. I listened for about 10 minutes, and then burst out laughing. I couldn’t stop. It did not improve her attack. Then I went home and read your letter to Mama and she enjoyed it very much. After that I did my week’s mending etc and caught the 6.0 train back to Balham. Did more knitting in the evening, and a little writing for Mrs Taylor. That reminds me. You will have a fit when you see your accounts, but don’t worry, you will be able to unravel the mystery from the pass book. The fact is Mrs Taylor has ideas of her own, and I won’t upset her on any account. She has no confidence in herself when it comes to the point. She does not seem as though she can start anything, so I do. Then she pops in with her ideas which I carry out, telling her she is a fine business woman. Her health is keeping very good, but when you come back I guess she will pass everything on to you, and it will be time she did. Writing business letters seem to worry her a bit, so I say to her “I’ll write that as I can see better than you. Shall I say this or that”, and then she promptly knows what she wants said. Now don’t worry and think you mother is at all queer. She is not, and has not been, either, but when you come back, as you will now very shortly, I don’t want you to say she should have done anything differently. She worries in case you will not be pleased, and I keep on telling her you will be delighted with her management.

Sunday morning I enjoyed exceedingly. You seemed so near to me, in fact there was only one thing wanting. Peter and I went on to the Common, and afterwards Mrs T & I went to Streatham Common and Extension. In the afternoon Charles Webber came. He looked very well, and told us all the latest war news, which I will put in a postscript in case the censor objects to it, and that we can expect you home either just before Xmas, or in the Spring at the latest.

I expect Mrs Day will return to-morrow, so that I will be going to Balham to-night and will help pack a parcel for you, and return home to-morrow. By the bye I have written to Muriel asking her friend to forward that book on Construction direct from the Board of Education.

Mrs Taylor has not reduced the number of your parcels from the Stores. [   censored  ]

Cannot stop any longer, so Goodbye.