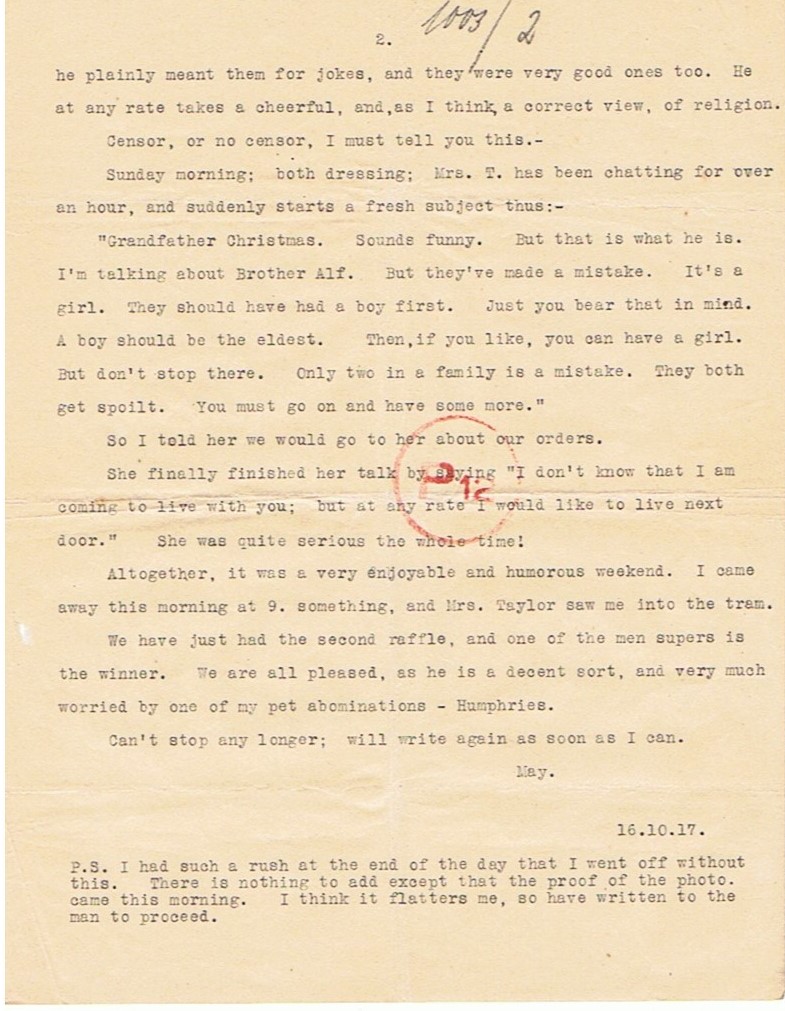 Maud and I left here at 1.0 last Saturday and went to lunch at Aldermanbury. Then we walked to London Bridge and took the train to Denmark Hill. While at London Bridge it came over dark and rained, so I felt disappointed. However, it brightened up when we arrived at D. Hill so we went to the photographers and I went thro’ that wretched performance again. He seemed a gloomy sort of photographer and almost greeted me with the words “Your eyes are very dark, and they are difficult to take”, so I don’t feel very hopeful about the result. Then we went shopping at Clapham, and finally arrived at Balham to tea at 5.0. Maud looks younger than she has done for years. We had a lively tea time, and Maud left at 6.30. It is awfully funny how Mrs T and Mrs Day get at one another; I don’t mean in an irritable way, because they are both laughing. The winks Mrs Day gives me are enough to make me split with suppressed laughter. I got on nicely, i.e. when laughter would permit me, with the jersey I am making for the bazaar. It is quite half finished now. This morning I came away with a huge bundle of goods from 56, including 6 pairs of socks that Mrs Taylor and Mrs Day had made, and various mats, table centre, and table cloth; also some things from Mrs Capel! We went to chapel yesterday morning and saw the choir master do his physical jerks. The minister made me laugh several times. He was actually making jokes from the pulpit! He was smiling himself, so he plainly meant them for jokes, and they were very good ones too. He at any rate takes on a cheerful, and, as I think, a correct view, of religion.

Censor or no censor, I must tell you this –

Sunday morning; both dressing; Mrs T had been chatting for over an hour, and suddenly starts a fresh subject thus:-

“Grandfather Christmas. Sounds funny. But that is what he is. I’m talking about Brother Alf. But they’ve made a mistake. It’s a girl. They should have had a boy first. Just you bear that in mind. A boy should be the eldest. The, if you like, you can have a girl. But don’t stop there. Only two in the family is a mistake. They both get spoilt. You must go on and have some more.”

So I told her we would go to her about our orders.

She finally finished her talk by saying “I don’t know that I am coming to live with you; but at any rate I would like to live next door.” She was quite serious the whole time!

Altogether, it was a very enjoyable and humorous weekend. I came away this morning at 9 something, and Mrs Taylor saw me into the tram.

We have just had the second raffle, and one of the men supers is the winner. We are all pleased, as he is a decent sort, and very much worried by one of my pet abominations – Humphries.

Can’t stop any longer; will write again as soon as I can.

P.S. I had such a rush at the end of the day that I went off without this. There is nothing to add except that the proof of the photo came this morning. I think it flatters me, so have written to the man to proceed.