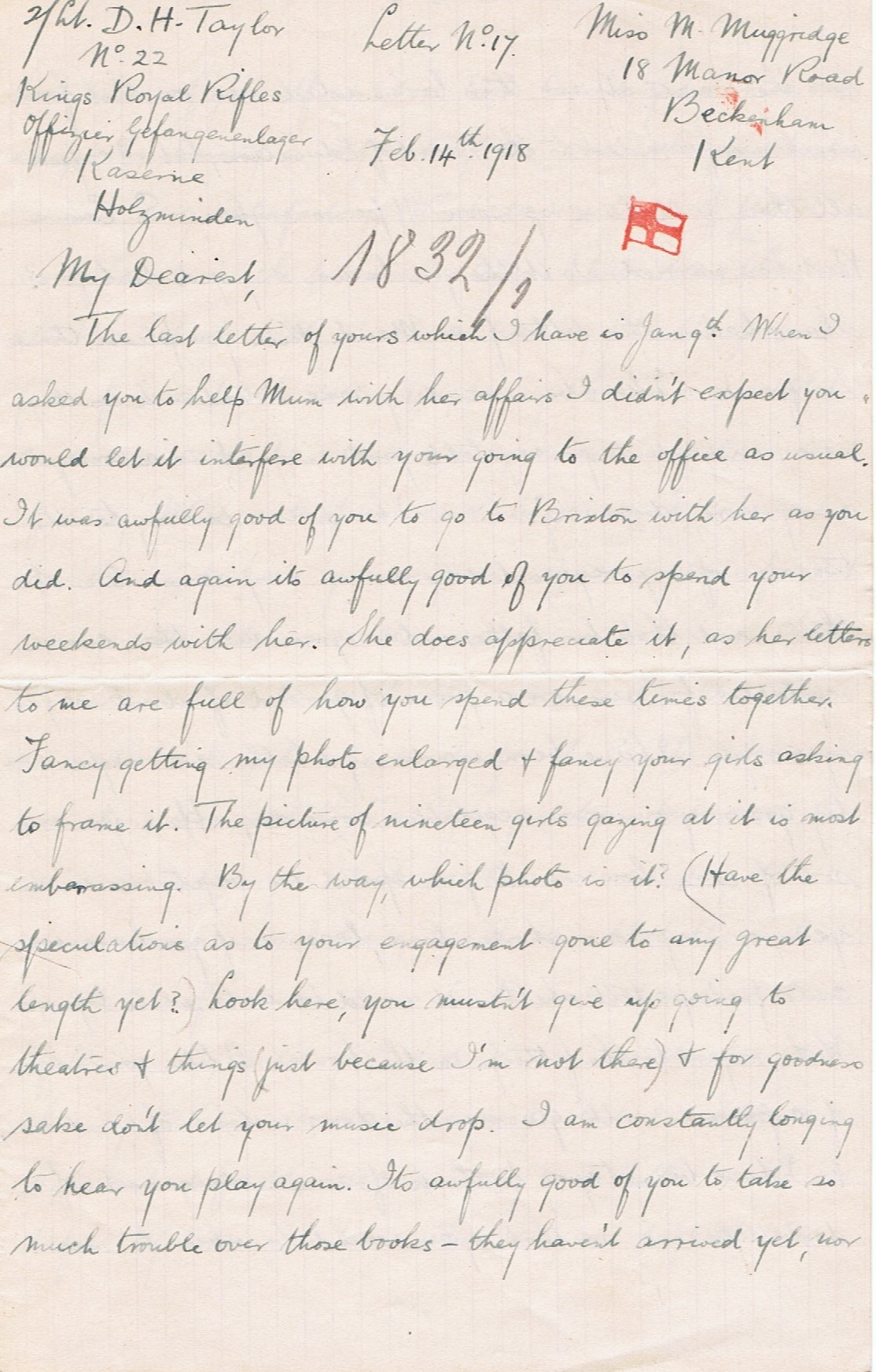 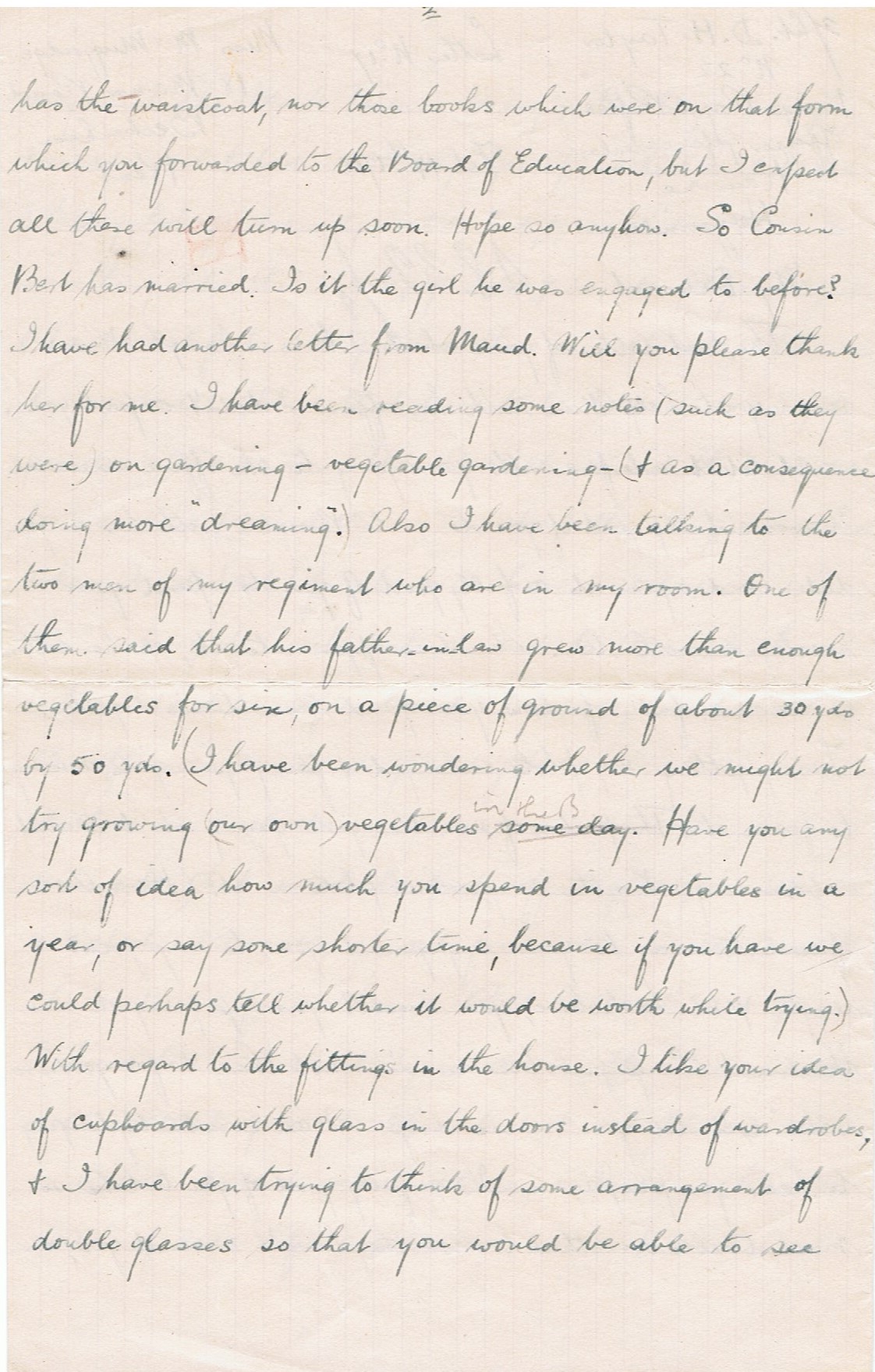 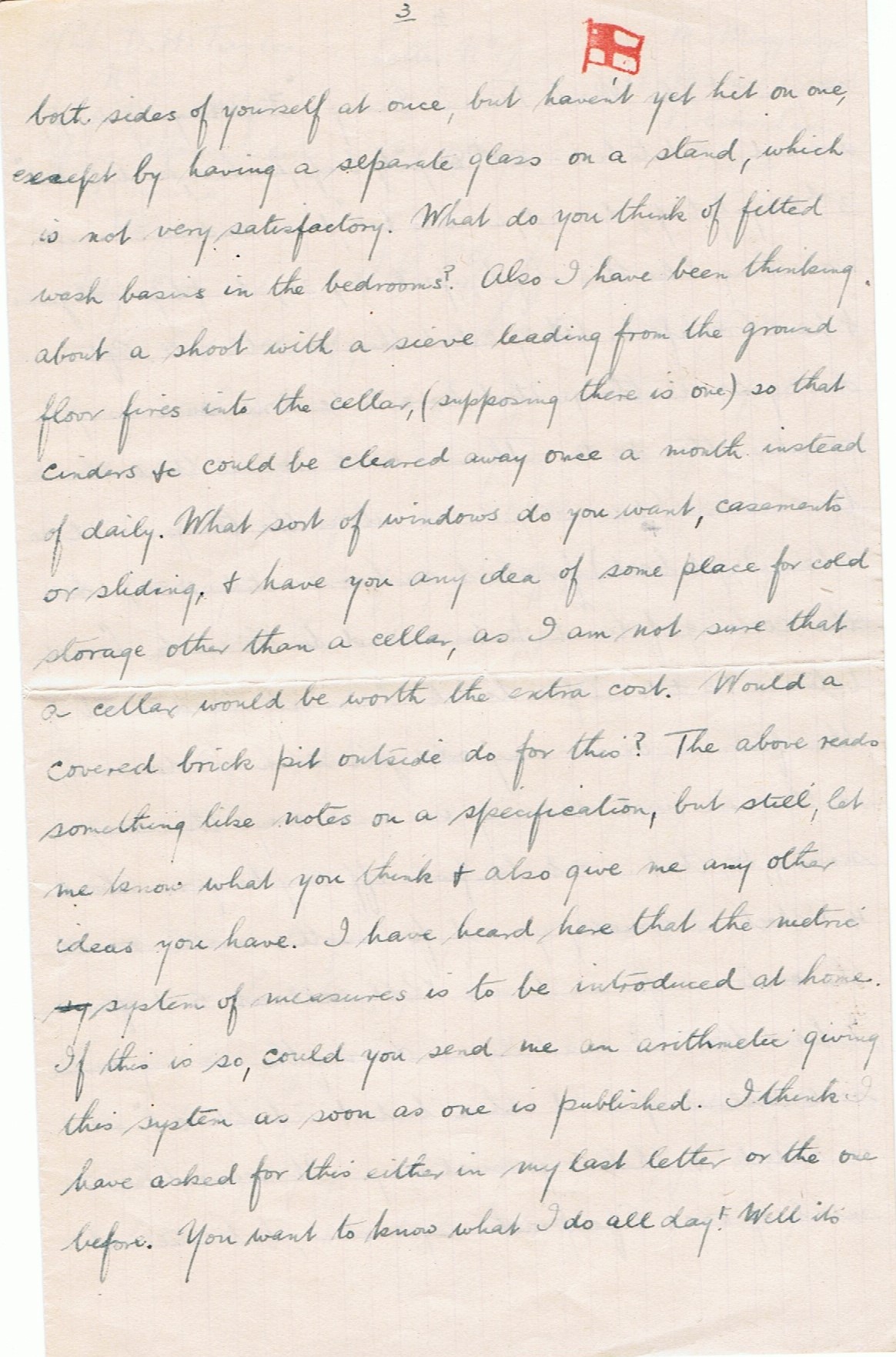 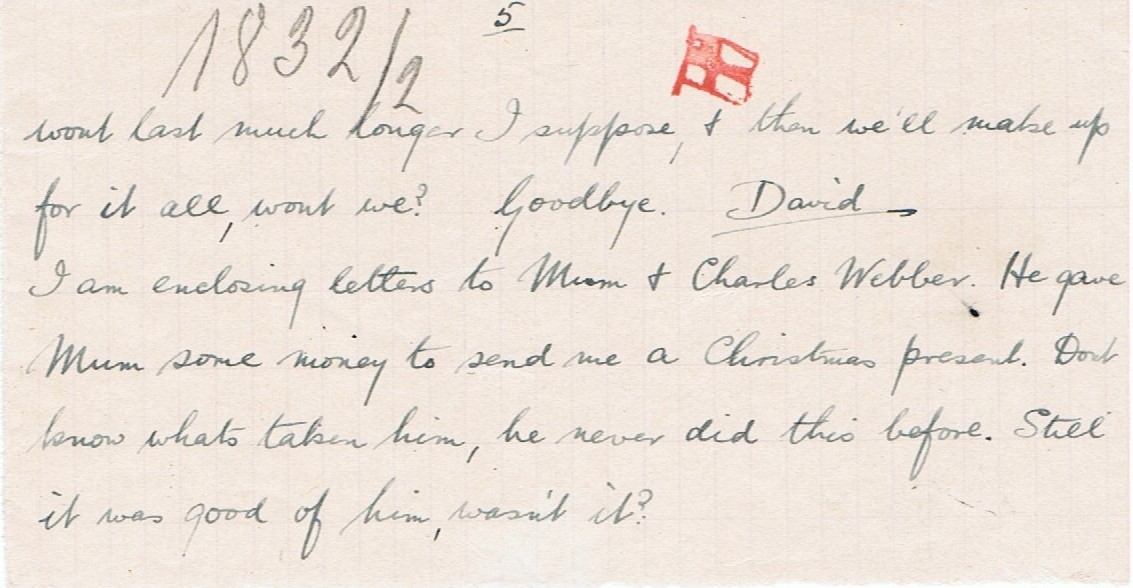 David to May HOLZMINDEN February l4th 1918
My Dearest,
The last letter of yours which I have is January 9th. When I asked you to help Mum with her affairs I didn’t expect you would let it interfere with your going to the office as usual. It was awfully good of you to go to Brixton with her as you did. And again its awfully good of you to spend your weekends with her. She does appreciate it, as her letters to me are full of how you spend these times together. Fancy getting my photo enlarged and fancy your girls asking to frame it. The picture of nineteen girls gazing at it is most embarrassing. By the way, which photo is it? Have the speculations as to your engagement gone to any great length yet? Look here, you mustn’t give up going to theatres and things just because I’m not there and for goodness sake don’t let your music drop. I am constantly longing to hear you play again. Its awfully good of you to take so much trouble over those books – they haven’t arrived yet, nor has the waistcoat, nor those books which were on that form which you forwarded to the Board of Education, but I expect all these will turn up soon. Hope so anyhow, So Cousin Bert has married. Is it the girl he was engaged to before? I have had another letter from Maud. Will you please thank her for me.
I have been reading some notes (such as they were) on gardening-vegetable gardening (and as a consequence doing more “dreaming”). Also I have been talking to the two men of my regiment who are in my room, One of them said that his father-in-law grew more than enough vegetables for six, on a piece of ground of about 30 yards by 50 yards. I have been wondering whether we might not try growing our own vegetables some day. Have you any sort of idea how much you spend in vegetables in a year, or say some shorter time, because if you have we could perhaps tell whether it would be worth while trying. With regard to the fittings in the house. I like your idea of cupboards with glass in the doors instead of wardrobes, and I have been trying to think of some arrangement of double glasses so that you would be able to see both sides of yourself at once, but haven’t yet hit on one, except by having a separate glass on a stand, which is not very satisfactory. What do you think of fitted wash basins in the bedrooms? Also I have been thinking about a shoot with a sieve leading from the ground floor fires into the cellar (supposing there is one), so that cinders etc. could be cleared away once a month instead of daily. What sort of windows do you want, casements or sliding, and have you any idea of some place for cold storage other than a cellar, as I am not sure that a cellar would be worth the extra cost. Would a covered brick pit outside do for this? The above reads something like notes on a specification, but still, let me know what you think and also give me any other ideas you have. I have heard here that the metric system of measures is to be introduced at home. If this is so, could you send me an arithmetic book giving this system as soon as one is published. I think I have asked for this either in my last letter or the one before.
You want to know what I do all day! Well its very much like Mark Twains Diary – “First Day – Get up, dressed, went to bed”. 2nd Day – “Got up, washed, went to bed”. 3rd Day – “Got up, dressed, went to bed”, and so and so on. Its something like this. I get up about 7.30, do physical jerks and have breakfast. At 9 o’clock there is roll call. Afterwards do any small dings that have to be done such as get parcels, letters etc. Then I walk round the enclosure for exercise (and usually dream about the things we’ll do when I get back) for about an hour until 11.30, when the cooking of lunch puts and end to the walk. Lunch between 12 and 1. After lunch I usually read most of the afternoon or do any odd jobs such as darning (and there is much darning in more ways than one), sewing, etc. that wont be put off any longer. About 4 o’clock I usually go out for another walk round the enclosure for an hour. Roll call at 5 and afterwards I have tea. I read again during the evening until roll call at 9.30 and then bed and “lights out” at 10 o’clock and that my usual day. It seems like so much of one’s life practically useless, but still it won’t last much longer I suppose, and then we’ll make up for it all won’t we?
Goodbye.

I am enclosing letters to Mum and Charles Webber. He gave Mum some money to send me a Christmas present. Don’t know whats taken him, he never did this before. Still it was good of him wasn’t it?