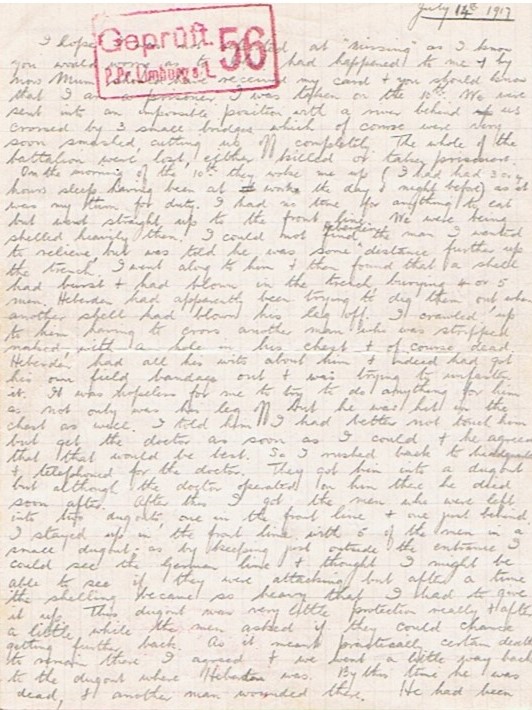 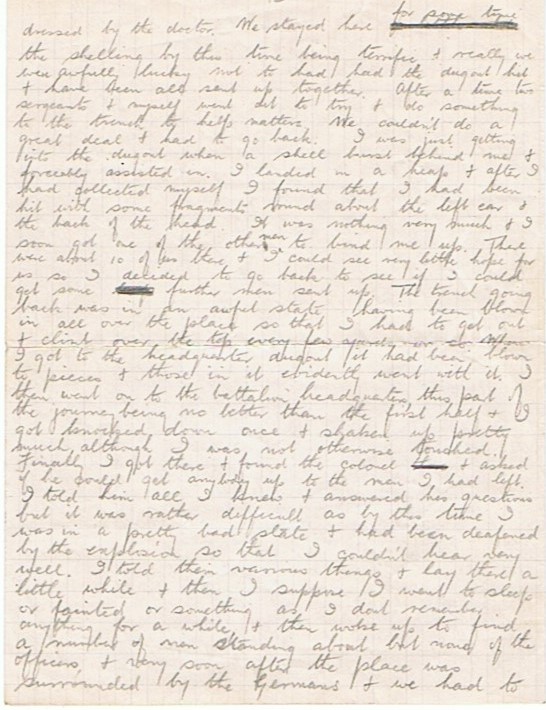 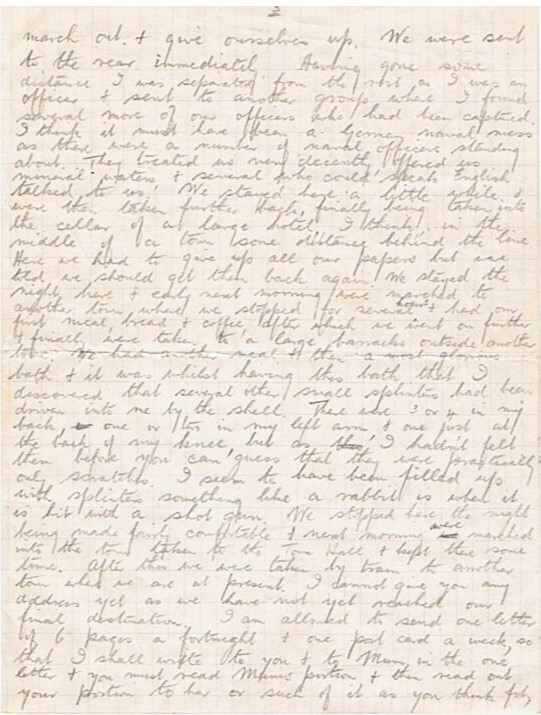 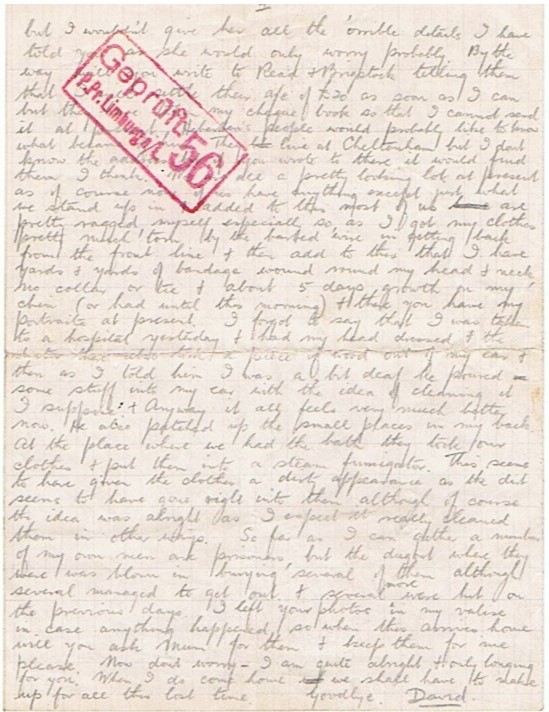 I hope I was not reported as “missing” as I know you would worry as to what had happened to me and by now Mum should have received my card and should know that I am a prisoner. I was taken on the 10 July. We were sent into an impossible position with a river behind us crossed by 3 small bridges which of course were very soon smashed cutting us off completely. The whole of the battalion were lost, either killed or taken prisoners.

On the morning of the 10th they woke me up (I had had 3 or 4 hours sleep having been at work the day and night before) as it was my turn for duty. I had not time for anything to eat but went straight up to the front line. We were being shelled heavily by then. I could not find Heberden the man I wanted to relieve, but was told he was some distance up the trench. I went along to him and then found that a shell had burst and had blown in the trench, burying 4 or 5 men. Heberden had apparently been trying to dig them out, when another shell had blown his leg off. I crawled up to him having to cross another man who was stripped naked, with a hole in his chest and of course dead. Heberden had all his wits about him and indeed had got his own field bandage out and was trying to unfasten it. It was hopeless for me to try to do anything for him as not only was his leg off but he was hit in the chest as well. I told him I had better not touch him but get the doctor as soon as I could and he agreed that that would be best. So rushed back to headquarters and telephoned for the doctor. They got him into a dugout but although the doctor operated on him he died soon after.

After this I got the men who were left into two dugouts, one in the front line and one just behind. I stayed up in the front line with 5 of the men in a small dugout; as by keeping just outside the entrance I could see the German line and thought I might be able to see if they were attacking but after a time the shelling became so heavy that I had to give it up. This dugout was very little protection really and after a little while the men asked if they could chance getting further back. As it meant practically certain death to remain there I agreed and we went a little way back to the dugout where Heberden was. By this time he was dead, and another man wounded there. He had been dressed by the doctor. We stayed there for some time the shelling by this time being terrific and really we were awfully lucky not to had had the dugout hit and have all been sent up together. After a time two sergeants and myself went out to try and do something to the trench to help matters. We couldn’t do a great deal and had to go back.

I was just getting into the dugout when a shell burst behind me and forceably assisted in. I landed in a heap and after I had collected myself I found that I had been hit with some fragments round the left ear and the back of the head. It was nothing very much and I soon got one of the other men to bind me up. There were about 10 of us there and I could see very little hope for us so I decided to go back to see if I could get some further men sent up. The trench going back in was in an awful state having been blown in all over the place so that I had to get out and climb over the top every few yards or so. When I got to the headquarter dugout it had been blown to pieces and those in it evidently went with it. I then went on to the battalion headquarters, this part of the journey being no better than the first half and I got knocked down one and shaken up pretty much, although I was not otherwise touched.

Finally I got there and found the colonel and asked if he could get anybody up to the men I had left. I told him all I knew and answered his questions but it was rather difficult as by this time I was in a pretty bad state and had been deafened by the explosion so that I couldn’t hear very well. I told them various things and lay there a little while and then I suppose I went to sleep or fainted or something as I don’t remember anything for a while, and then woke up to find a number of men standing about but none of the officers, and very soon after the place was surrounded by the Germans and we had to march out and give ourselves up. We were sent to the rear immediately. Having gone some distance I was separated from the rest as I was an officer and sent to another group where I found several more of our officers who had been captured. I think it must have been a German naval mess as there were a number of naval officers standing about. They treated us very decently, offered us mineral waters, and several who could speak English talked to us. We stayed here a little while and were then taken further back, finally being taken into the cellar of a large hotel, I think, in the middle of a town some distance behind the line. Here we had to give up all our papers but were told we should get them back again. We stayed the night here and early next morning were marched to another town where we stopped for several hours and had our first meal, bread and coffee, after which we went on further and finally were taken to a large barracks outside another town.

We had another meal and then a most glorious bath and it was whilst having this bath that I discovered that several other small splinters had been driven into me by the shell. There were 3 or 4 in my back, one or two in my left arm and one just at the back of my knee, but as I hadn’t felt them before you can guess that they were practically only scratches. I seem to have been filled up with splinters something like a rabbit is when it is hit with a shot gun. We stopped here the night being made fairly comfortable and next morning were marched into the town, taken to the Town Hall and kept there for some time. After this we were taken by train to another town where we are at present. I cannot give you any address yet as we have not yet reached our final destination.

I am allowed to send one letter of 6 pages a fortnight and one post card a week, so I shall write to you and Mum in the one letter and you must read Mum’s portion and then read out your portion to her or such of it as you think fit, but I wouldn’t give her all the ‘orrible details I have told you as she would only worry probably. By the way will you write to Read & Brigstock telling them I will settle their account of £20 as soon as I can but they have taken my cheque book so that I cannot send it at present. Heberden’s people would probably like to know what became of him. They live at Cheltenham but I don’t know the address but if you wrote to there it would find them, I think.

We are all a pretty looking lot at present as of course none of us have anything except just what we stand up in and added to this most of us are pretty ragged, myself especially so, as I got my clothes pretty much torn by the barbed wire in getting back from the front line and then add to this that I have yards and yards of bandage wound around my head and neck, no collar, or tie and about 5 days growth on my chin (or had until this morning) and there you have my portrait at present.

I forgot to say that I was taken to a hospital yesterday and had my head dressed and the doctor there also took a piece of wood out of my ear and then as I told him I was a bit deaf he poured some stuff into my ear with the idea of cleaning it I suppose. Anyway it all feels very much better now. He also patched up the small places in my back.

At the place where we had the bath they took our clothes and put them into a steam fumigator. This seems to have given the clothes a dirty appearance as the dirt seems to have gone right into them although of course the idea was alright as I expect it really cleaned them in other ways. So far as I can gather a number of my own men are prisoners but the dugout where they were was blown in burying several of them although several managed to get out and several more were hit on the previous days.

I left your photo in my valise in case anything happened, so when this arrives home will you ask Mum for them and keep them for me please. Now don’t worry — I am quite alright and only longing for you. When I do come home we shall have to make up for all this lost time.