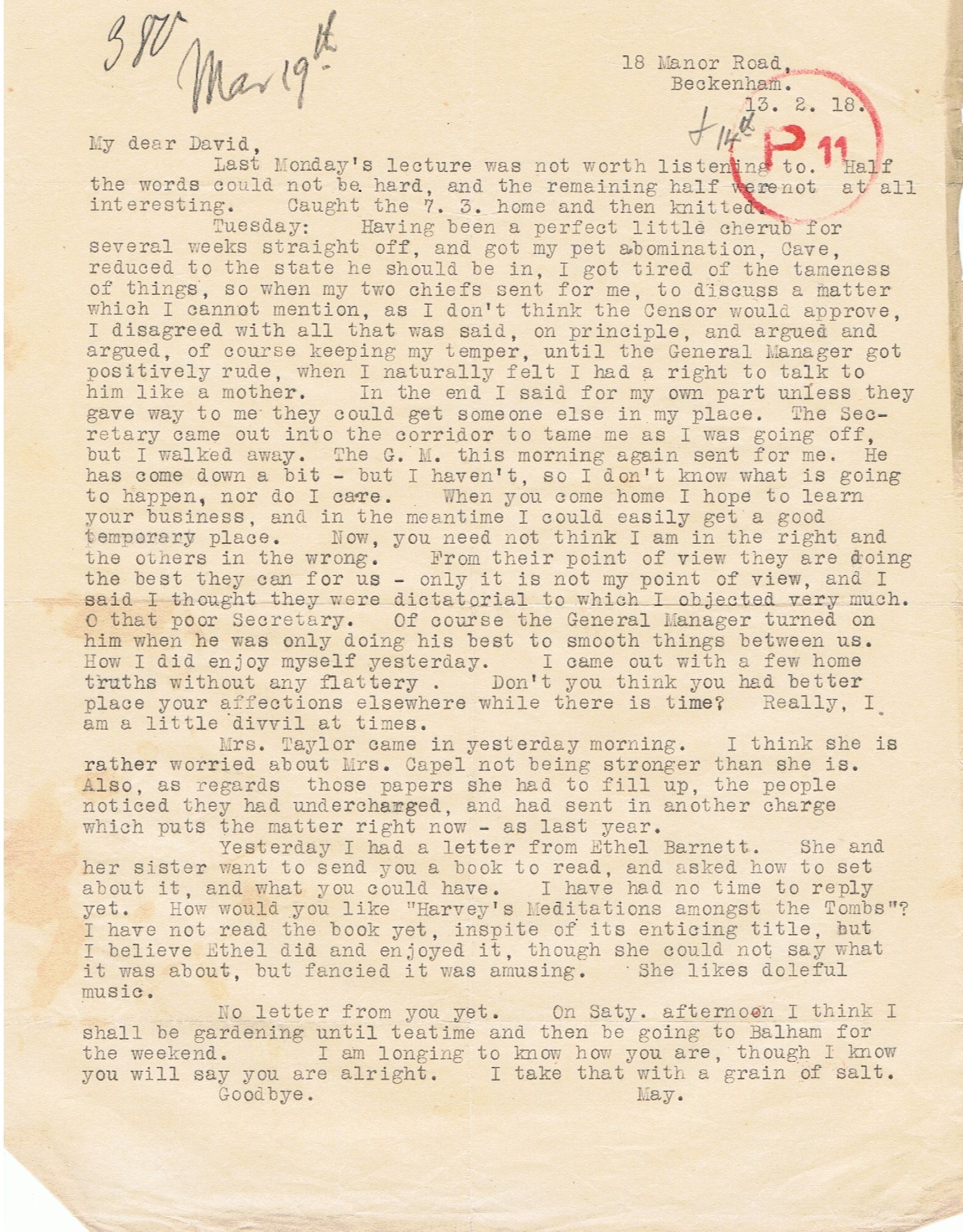 May to David Beckenham 13. 2. 18.
My dear David,
Last Monday’s lecture was not worth listening to. Half the words could not be heard, and the remaining half were not at all interesting. Caught the 7. 3. home and then knitted.
Tuesday: Having been a perfect little cherub for several weeks straight off, and got my pet abomination, Cave, reduced to the state he should be in, I got tired of the tameness of things, so when my two chiefs sent for me, to discuss a matter which I cannot mention, as I don’t think the Censor would approve, I disagreed with all that was said, on principle, and argued and argued, of course keeping my temper, until the General Manager got positively rude, when I naturally felt I had a right to talk to him like a mother. In the end I said for my own part unless they gave way to me they could get someone else in my place. The Secretary came out, into the corridor to tame me as I was going off, but I walked away. The G. M. this morning again sent for me. He has come down a bit – but I haven’t, so I don’t know what is going to happen, nor do I care. When you come home I hope to learn your business, and in the meantime I could easily get a good temporary place. Now, you need not think I am in the right and the others in the wrong. From their point of view they are doing the best they can for us – only it is not my point of view, and I said I thought they were dictatorial to which I objected very much. 0 that poor Secretary. Of course the General Manager turned on him when he was only doing his best to smooth things between us. How I did enjoy myself yesterday. I came out with a few home truths without any flattery. Don’t you think you had better place your affections elsewhere while there is time? Really, I am a little divvil at times.
Mrs. Taylor came in yesterday morning. I think she is rather worried about Mrs. Capel not being stronger than she is. Also, as regards those papers she had to fill up, the people noticed they had undercharged, and had sent in another charge which puts the matter right now – as last year.
Yesterday I had a letter from Ethel Barnett. She and her sister want to send you a book to read, and asked how to set about it, and what you could have. I have had no time to reply yet. How would you like “Harvey’s Meditations amongst the Tombs”? I have not read the book yet, in spite of its enticing title, but I believe Ethel did and enjoyed it, though she could not say what it was about, but fancied it was amusing. She likes doleful music.
No letter from you yet. On Saturday afternoon I think I shall be gardening until teatime and then be going to Balham for the weekend. I am longing to know how you are, though I know you will say you are alright. I take that with a grain of salt.
Goodbye. May.