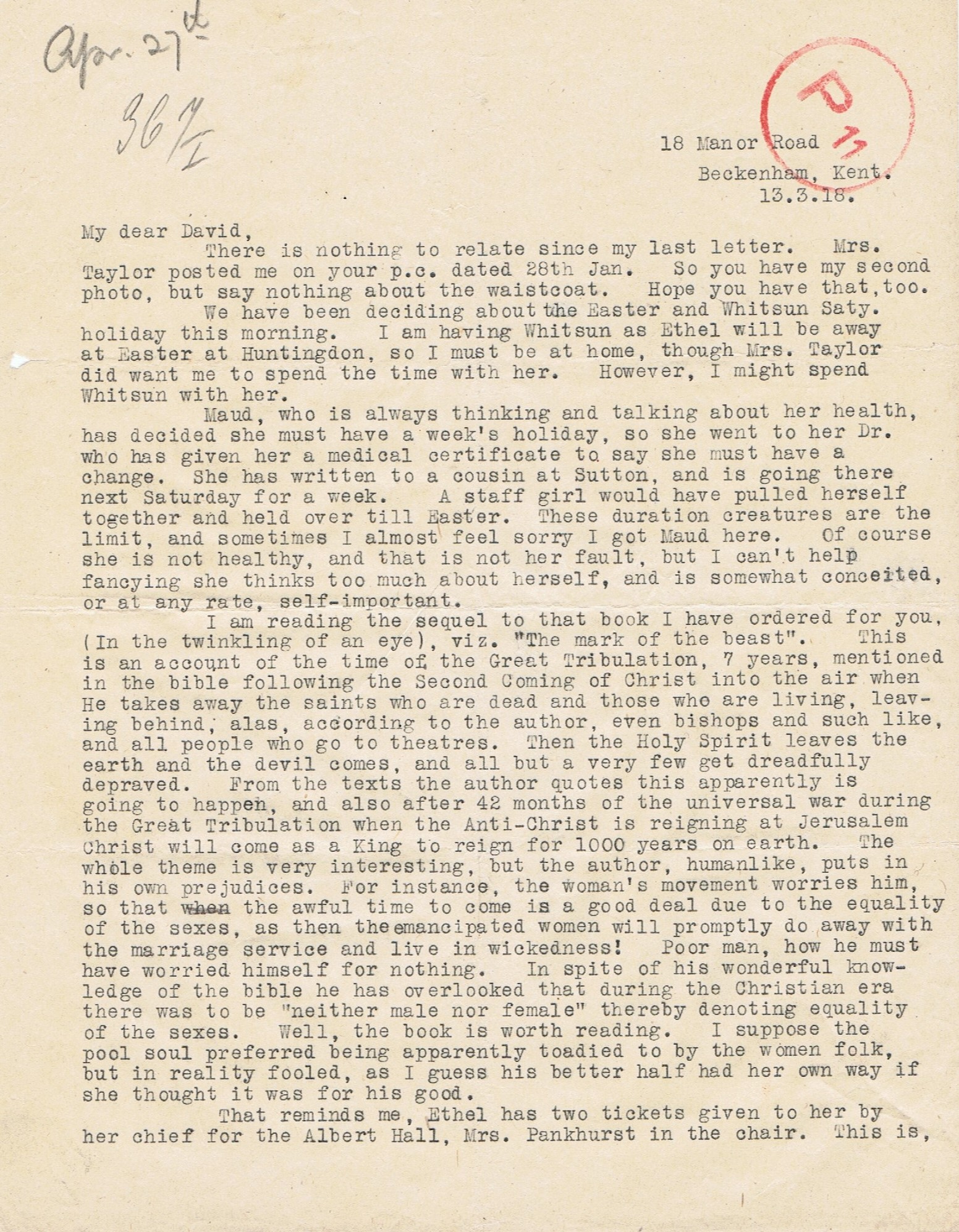 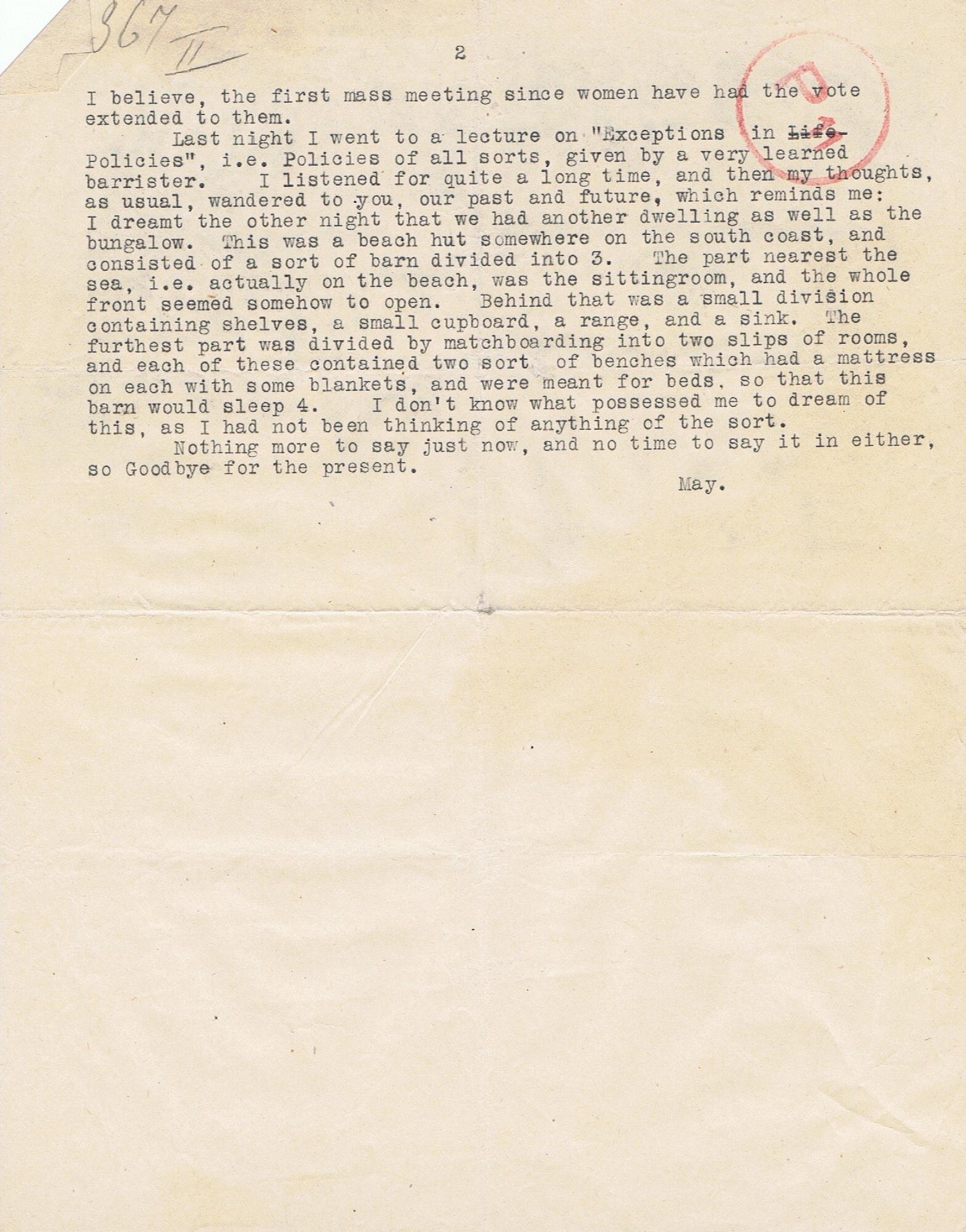 May to David Beckenham 13.3.18
My dear David,
There is nothing to relate since my last letter. Mrs. Taylor posted me on your p.c. dated 28th Jan. So you have my second photo, but say nothing about the waistcoat. Hope you have that too.
We have been deciding about the Easter and Whitsun Saty. holiday this morning. I am having Whitsun as Ethel will be away at caster at Huntingdon, so I must be at home, though Mrs. Taylor did want me to spend the time with her. However, I might spend Whitsun with her.
Maud, who is always thinking and talking about her health, has decided she must have a week’s holiday, so she went to her Dr. who has given her a medical certificate to say she must have a change. She has written to a cousin at Sutton, and is going there next Saturday for a week. A staff girl would have pulled herself together and held over till Easter. These duration creatures are the limit, and sometimes I almost feel sorry I got Maud here. Of course she is not healthy, and that is not her fault, but I can’t help fancying she thinks too much about herself, and is somewhat conceited, or at any rate, self-important.
I am reading the sequel to that book I have ordered for you, (In the twinkling of an eye), viz. “The mark of the beast”. This is an account of the time of the Great Tribulation, 7 years, mentioned in the bible following the Second Coming of Christ into the air when He takes away the saints who are dead and those who are living, leaving behind, alas, according to the author, even bishops and such like, and all people who go to theatres. Then the Holy Spirit leaves the earth and the devil comes, and all but a very few get dreadfully depraved. From the texts the author quotes this apparently is going to happen, and also after 42 months of the universal war during the Great Tribulation when the Anti-Christ is reigning at Jerusalem Christ will come as a King to reign for 1000 years on earth. The whole theme is very interesting, but the author, humanlike, puts in his own prejudices. For instance, the woman’s movement worries him, so that the awful time to come is a good deal due to the equality of the sexes, as then the emancipated women will promptly do away with the marriage service and live in wickedness! Poor man, how he must have worried himself for nothing. In spite of his wonderful knowledge of the bible he has overlooked that during the Christian era there was to be “neither male nor female” thereby denoting equality of the sexes. Well, the book is worth reading. I suppose the poor soul preferred being apparently toadied to by the women folk, but in reality fooled, as I guess his better half had her own way if she thought it was for his good.
That reminds me, Ethel has two tickets given to her by her chief for the Albert Hall, Mrs. Pankhurst in the chair. This is, I believe, the first mass meeting since women have had the vote extended to them.
Last night I went to a lecture on “Exceptions in Policies”, i.e. Policies of all sorts, given by a very learned barrister. I listened for quite a long time, and then my thoughts, as usual, wandered to you, our past and future, which reminds me: I dreamt the other night that we had another dwelling as well as the bungalow. This was a beach hut somewhere on the south coast, and consisted of a sort of barn divided into 3. The part nearest the sea, i.e. actually on the beach, was the sitting room, and the whole front seemed somehow to open. Behind that was a small division containing shelves, a small cupboard, a range, and a sink. The furthest part was divided by match boarding into two slips of rooms, and each of these contained two sort of benches which had a mattress on each with some blankets, and were meant for beds, so that this barn would sleep 4. I don’t know what possessed me to dream of this, as I had not been thinking of anything of the sort.
Nothing more to say just now, and no time to say it in either, so Goodbye for the present. May.