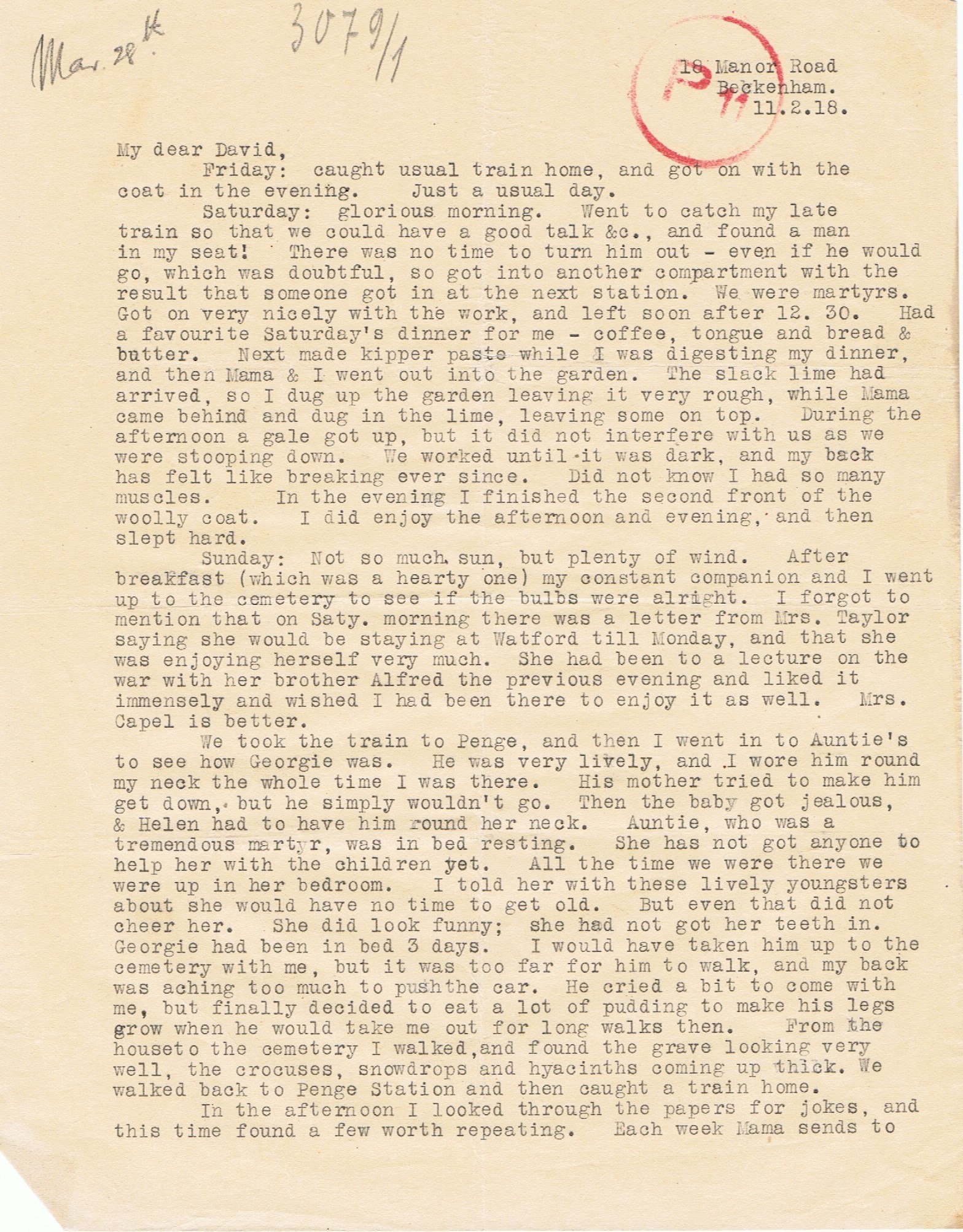 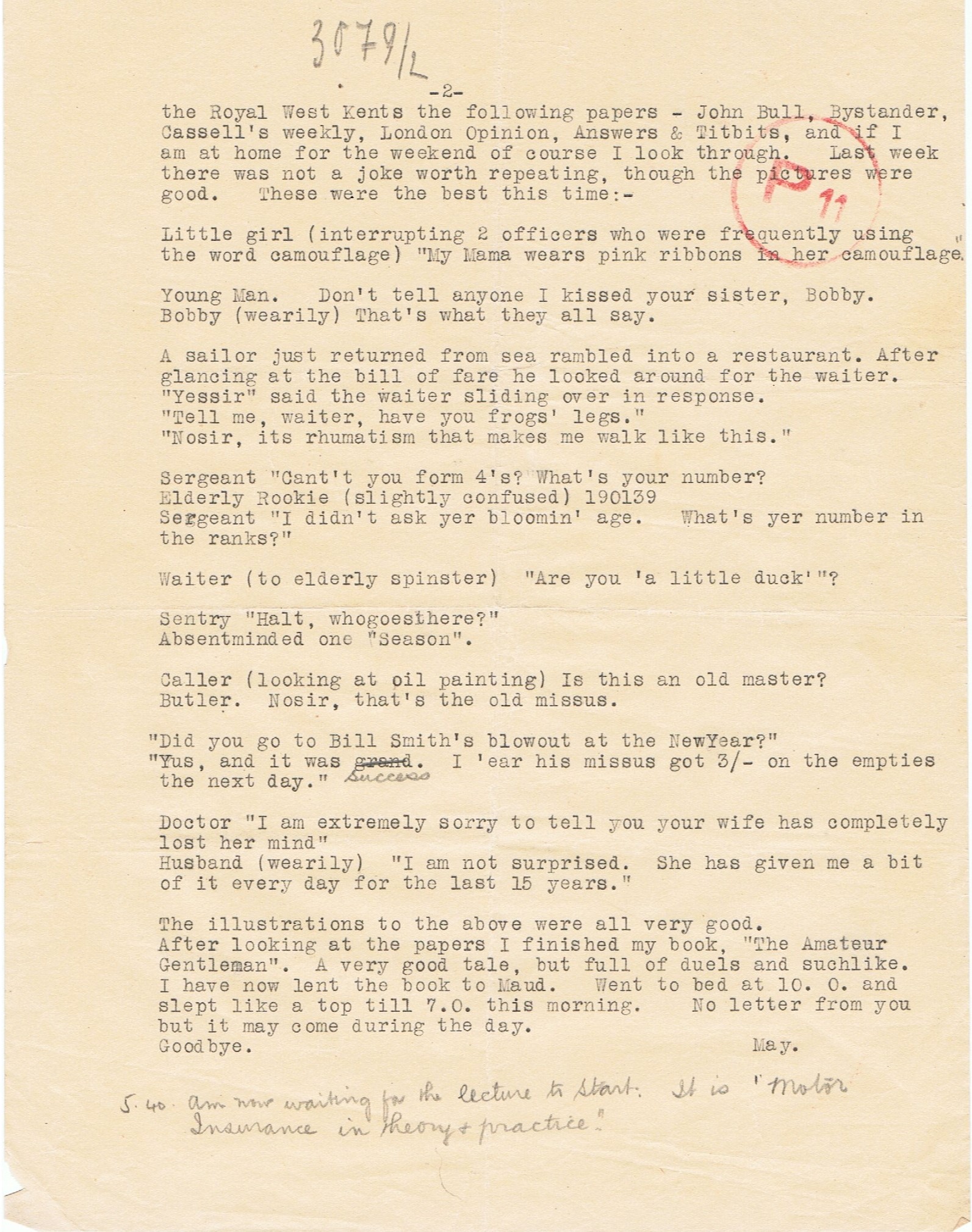 May to David Beckenham 11.2.18.
My dear David,
Friday: caught usual train home, and got on with the coat in the evening. Just a usual day.
Saturday: glorious morning. Went to catch my late train so that we could have a good talk etc, and found a man in my seat! There was no time to turn him out – even if he would go, which was doubtful, so got into another compartment with the result that someone got in at the next station. We were martyrs. Got on very nicely with the work, and left soon after 12. 30. Had a favourite Saturday’s dinner for me – coffee, tongue and bread & butter. Next made kipper paste while I was digesting my dinner, and then Mama and I went out into the garden. The slack lime had arrived, so I dug up the garden leaving it very rough, while Mama came behind and dug in the lime, leaving some on top. During the afternoon a gale got up, but it did not interfere with us as we were stooping down. We worked until it was dark, and my back has felt like breaking ever since. Did not know I had so many muscles. In the evening I finished the second front of the woolly coat. I did enjoy the afternoon and evening, and then slept hard.
Sunday: Not so much sun, but plenty of wind. After breakfast (which was a hearty one) my constant companion and I went up to the cemetery to see if the bulbs were alright. I forgot to mention that on Saturday morning there was a letter from Mrs. Taylor saying she would be staying at Watford till Monday, and that she was enjoying herself very much. She had been to a lecture on the war with her brother Alfred the previous evening and liked it immensely and wished I had been there to enjoy it as well. Mrs. Capel is better.
We took the train to Penge, and then I went in to Auntie’s to see how Georgie was. He was very lively, and I wore him round my neck the whole time I was there. His mother tried to make him get down, but he simply wouldn’t go. Then the baby got jealous, and Helen had to have him round her neck. Auntie, who was a tremendous martyr, was in bed resting. She has not got anyone to help her with the children yet. All the time we were there we were up in her bedroom. I told her with these lively youngsters about she would have no time to get old. But even that did not cheer her. She did look funny; she had not got her teeth in. Georgie had been in bed 3 days. I would have taken him up to the cemetery with me, but it was too far for him to walk, and my back was aching too much to push the car. He cried a bit to come with me, but finally decided to eat a lot of pudding to make his legs grow when he would take me out for long walks then. From the house to the cemetery I walked, and found the grave looking very well, the crocuses, snowdrops and hyacinths coming up thick. We walked back to Penge Station and then caught a train home.
In the afternoon I looked through the papers for jokes, and this time found a few worth repeating. Each week Mama sends to the Royal West Kents the following papers – John Bull, Bystander, Cassell’s weekly, London Opinion, Answers & Titbits, and if I am at home for the weekend of course I look through. Last week there was not a joke worth repeating, though the pictures were good. These were the best this time:-
Little girl (interrupting 2 officers who were frequently using the word camouflage) “My Mama wears pink ribbons her camouflage.”
Young Man. Don’t tell anyone I kissed your sister, Bobby. Bobby (wearily) That’s what they all say.
A sailor just returned from sea rambled into a restaurant. After glancing at the bill of fare he looked around for the waiter. “Yessir” said the waiter sliding over in response.
“Tell me, waiter, have you frogs legs.”
“No sir, its rhumatism that makes me walk like this.”
Sergeant “Can’t you form 4’s? What’s your number?
Elderly Rookie (slightly confused) 190139
Sergeant “I didn’t ask yer bloomin’ age. What’s yer number in the ranks?”
Waiter (to elderly spinster) “Are you ‘a little duck’”?
Sentry “Halt whogoesthere?”
Absentminded one “Season”.
Caller (looking at oil painting) Is this an old master? Butler. No sir, that’s the old missus.
“Did you go to Bill Smith’s blowout at the New year?”
“Yus, and it was success. I ‘ear his missus got 3/- on the empties the next day.”
Doctor “I am extremely sorry to tell you your wife has completely lost her mind”
Husband (wearily) “I am not surprised. She has given me a bit of it every day for the last 15 years.”
The illustrations to the above were all very good.
After looking at the papers I finished my book, “The Amateur Gentleman”. A very good tale, but full of duels and suchlike. I have now lent the book to Maud. Went’ to bed at 10. 0. and slept like a top till 7.0. this morning. No letter from you but it may come during the day.
Goodbye. May.
5.40 Am now waiting for lecture to start. It is ‘Motor Insurance in theory and practice.’