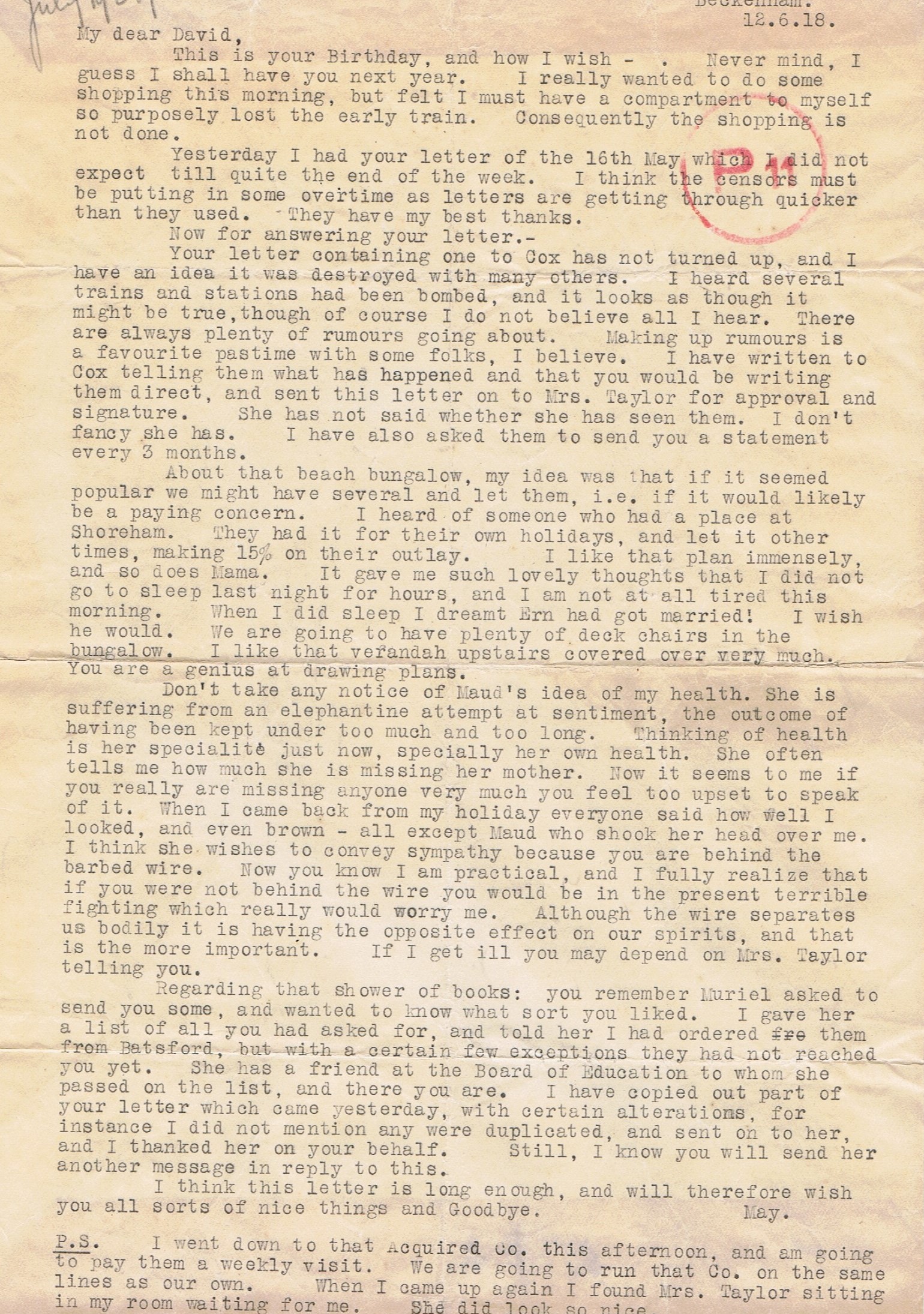 May to David Beckenham 12.6.18
My dear David,
This is your Birthday, and how I wish – . Never mind, I guess I shall have you next year. I really wanted to do some shopping this morning, but felt I must have a compartment to myself so purposely lost the early train. Consequently the shopping is not done.
Yesterday I had your letter of the 16th May which I did not expect till quite the end of the week. I think the censors must be putting in some overtime as letters are getting through quicker than they used. They have my best thanks.
Now for answering your letter.-
Your letter containing one to Cox has not turned up, and I have an idea it was destroyed with many others. I heard several trains and stations had been bombed, and it looks as though it might be true, though of course I do not believe all I hear. There are always plenty of rumours going about. Making up rumours is a favourite pastime with some folks, I believe. I have written to Cox telling them what has happened and that you would be writing them direct, and sent this letter on to Mrs Taylor for approval and signature. She has not said whether she has seen them. I don’t fancy she has. I have also asked them to send you a statement every 3 months.
About that beach bungalow, my idea was that if it seemed popular we might have several and let them, i.e. if it would likely by a paying concern. I heard of someone who had a place at Shoreham. They had it for their own holidays, and let it other times, making 15% on their outlay. I like that plan immensely, and so does Mama. It gave me such lovely thoughts that I did not go to sleep last night for hours, and I am not at all tired this morning. When I did sleep I dreamt Ern had got married! I wish he would. We are going to have plenty of deck chairs in the bungalow. I like that verandah upstairs covered over very much. You are a genius at drawing plans.
Don’t take any notice of Maud’s idea of my health. She is suffering from an elephantine attempt at sentiment, the outcome of having been kept under too much and too long. Thinking of health is her specialite just now, especially her own health. She often tells me how much she is missing her mother. Now it seems to me if you really are missing anyone very much you feel too upset to speak of it. When I came back from my holiday everyone said how well I looked, and even brown – all except Maud who shook her head over me. I think she wishes to convey sympathy because you are behind the barbed wire. Now you know I am practical, and I fully realize that if you were not behind the wire you would be in the present terrible fighting which really would worry me. Although the wire separates us bodily it is having the opposite effect on our spirits, and that is the more important. If I get ill you may depend on Mrs Taylor telling you.
Regarding that shower of books: you remember Muriel asked to send you some, and wanted to know what sort you liked. I gave her a list of all you had asked for, and told her I had ordered them from Batsford, but with a certain few exceptions they had not reached you yet. She has a friend at the Board of Education to whom she passed on the list, and there you are. I have copied out part of your letter which came yesterday, with certain alterations, for instance I did not mention any were duplicated, and sent on to her, and I thanked her on your behalf. Still, I know you will send her another message in reply to this.
I think this letter is long enough, and will therefore wish you all sorts of nice things and Goodbye. May
PS I went down to that Acquired Co this afternoon, and am going to pay them a weekly visit. We are going to run that Co on the same lines as our own. When I came up again I found Mrs Taylor sitting in my room waiting for me. She did look so nice.