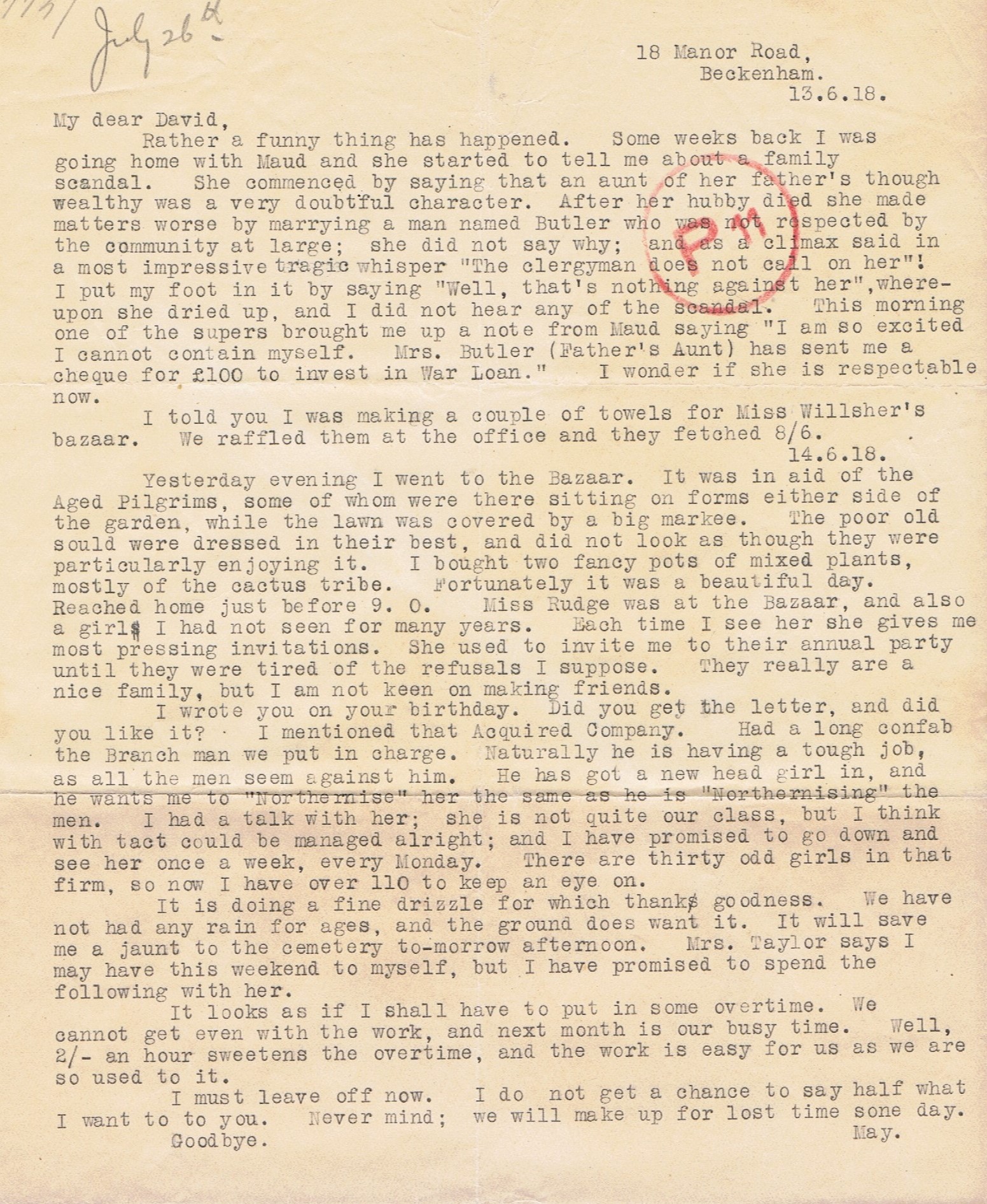 May to David Beckenham 13.6.18
My dear David,
Rather a funny thing has happened. Some weeks back I was going home with Maud and she started to tell me about a family scandal. She commenced by saying that an aunt of her father’s though wealthy was a very doubtful character. After her hubby died she made matters worse by marrying a man named Butler who was not respected by the community at large; she did not say why; and as a climax said in a most impressive tragic whisper “The clergyman does not call on her”! I put my foot in it by saying “Well, that’s nothing against her”, where-upon she dried up, and I did not hear any of the scandal. This morning one of the supers brought me up a note from Maud saying “I am so excited I cannot contain myself. Mrs Butler (Father’s Aunt) has sent me a cheque for £100 to invest in War Loan.” I wonder if she is respectable now.
I told you I was making a couple of towels for Miss Willsher’s bazaar. We raffled them at the office and they fetched 8/6.
14.6.18
Yesterday evening I went to the Bazaar. It was in aid of the Aged Pilgrims, some of whom were there sitting on forms either side of the garden, while the lawn was covered by a big markee. The poor old souls were dressed in their best, and did not look as though they were particularly enjoying it. I bought two fancy pots of mixed plants, mostly of the cactus tribe. Fortunately it was a beautiful day. Reached home just before 9.0. Miss Rudge was at the Bazaar, and also a girl I had not seen for many years. Each time I see her she gives me most pressing invitations. She used to invite me to their annual party until they were tired of the refusals I suppose. They really are a nice family, but I am not keen on making friends.
I wrote you on your birthday. Did you get the letter, and did you like it? I mentioned that Acquired Company. Had a long confab the Branch man we put in charge. Naturally he is having a tough job, as all the men seem against him. He has got a new head girl in, and he wants me to “Northernise” her the same as he is “Northernising” the men. I had a talk with her; she is not quite our class, but I think with tact could be managed alright; and I have promised to go down and see her once a week, every Monday. There are thirty odd girls in that firm, so now I have over 110 to keep an eye on.
It is doing a fine drizzle for which thank goodness. We have not had any rain for ages, and the ground does want it. It will save me a jaunt to the cemetery tomorrow afternoon. Mrs Taylor says I may have this weekend to myself, but I have promised to spend the following with her.
It looks as if I shall have to put in some overtime. We cannot get even with the work, and next month is our busy time. Well, 2/- an hour sweetens overtime, and the work is easy for us as we are so used to it.
I must leave off now. I do not get a chance to say half of what I want to you. Never mind; we will make up for lost time one day.
Goodbye.
May