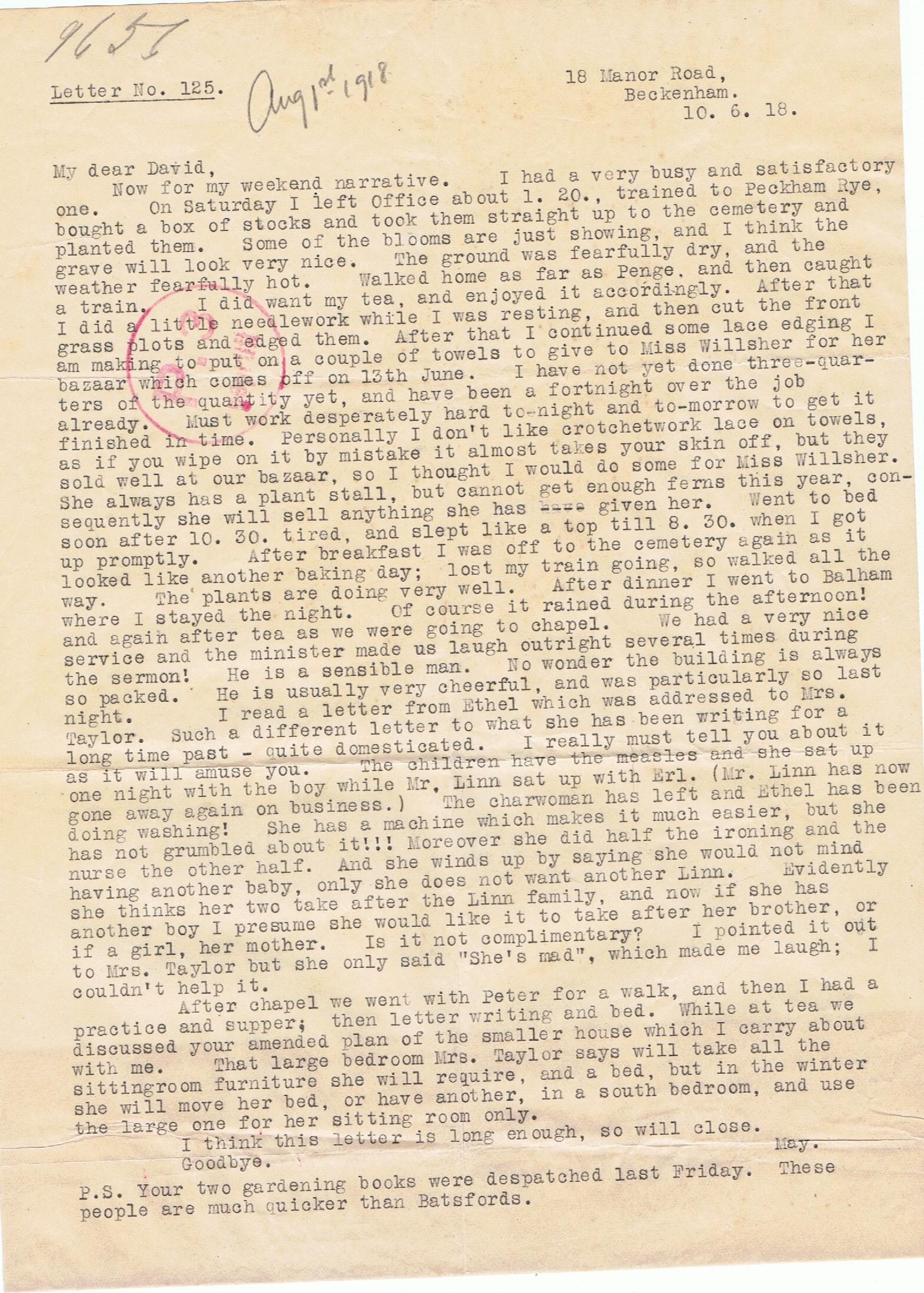 May to David Beckenham Letter No 125 10.6.18
My dear David,
Now for my weekend narrative. I had a very busy and satisfactory one. On Saturday I left Office about 1.20, trained to Peckham Rye, bought a box of stocks and took them straight up to the cemetery and planted them. Some of the blooms are just showing, and I think the grave will look very nice. The ground was fearfully dry, and the weather fearfully hot. Walked home as far as Penge, and then caught a train. I did want my tea, and enjoyed it accordingly. After that I did a little needlework while I was resting, and then cut the front grass plots and edged them. After that I continued some lace edging I am making to put on a couple of towels to give to Miss Willsher for her bazaar which comes off on 13th June. I have not yet done three-quarters of the quantity yet, and have been a fortnight over the job already. Must work desperately hard tonight and tomorrow to get it finished in time. Personally I don’t like crotchetwork lace on towels, as if you wipe on it by mistake it almost takes your skin off, but they sold well at our bazaar, so I thought I would do some for Miss Willsher. She always has a plant stall, but cannot get enough ferns this year, consequently she will sell anything she had given her. Went to bed soon after 10.30 tired, and slept like a top till 8.30 when I got up promptly. After breakfast I was off to the cemetery again as it looked like another baking day; lost my train going, so walked all the way. The plants are doing very well. After dinner I went to Balham where I stayed the night. Of course it rained during the afternoon! And again after tea as we were going to chapel. We had a very nice service and the minister made us laugh outright several times during the sermon! He is a sensible man. No wonder the building is always so packed. He is usually very cheerful, and was particularly so last night. I read a letter from Ethel which was addressed to Mrs Taylor. Such a different letter to what she had been writing for a long time past – quite domesticated. I really must tell you about it as it will amuse you. The children have the measles and she sat up one night with the boy while Mr Linn sat up with Erl. (Mr Linn has now gone away on business.) The charwoman has left and Ethel has now been doing washing! She has a machine which makes it much easier, but she has not grumbled about it!!! Moreover she did half the ironing and the nurse the other half. And she winds up saying she would not mind having another baby, only she does not want another Linn. Evidently she thinks her two take after the Linn family, and now if she has another boy I presume she would like it to take after her brother, or if a girl, her mother. Is it not complimentary? I pointed it out to Mrs Taylor but she only said “She’s mad”, which made me laugh; I couldn’t help it.
After chapel we went with Peter for a walk, and then I had a practice and supper; then letter writing and bed. While at tea we discussed your amended plan of the smaller house which I carry about with me. That large bedroom Mrs Taylor says will take all the sitting room furniture she will require, and a bed, but in the winter she will move her bed, or have another, in a south bedroom, and use the large one for her sitting room only.
I think this letter is long enough, so will close. Goodbye. May
PS Your two gardening books were despatched last Friday. These people are much quicker than Batsfords.