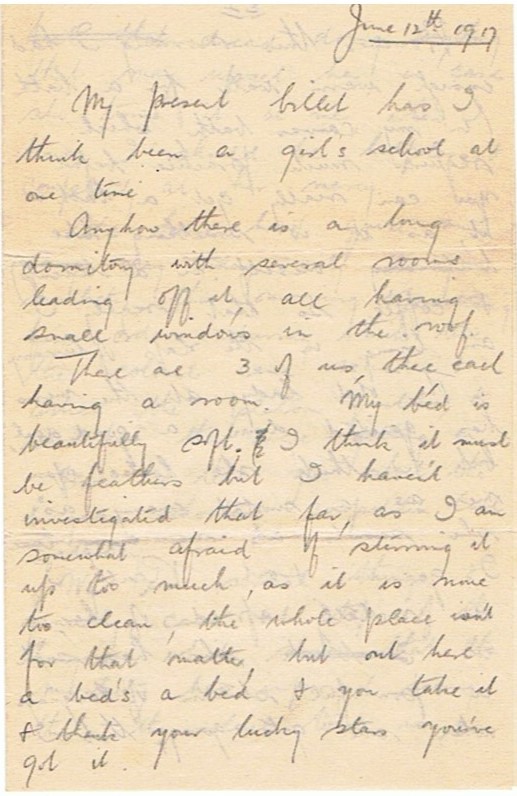 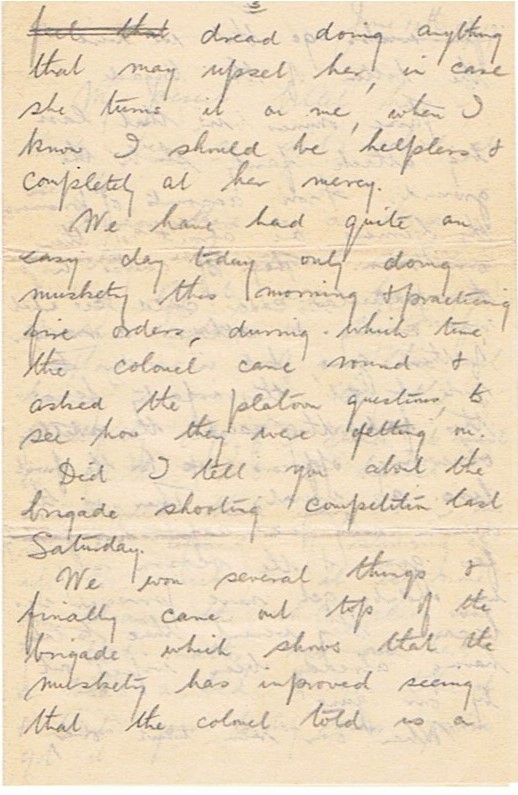 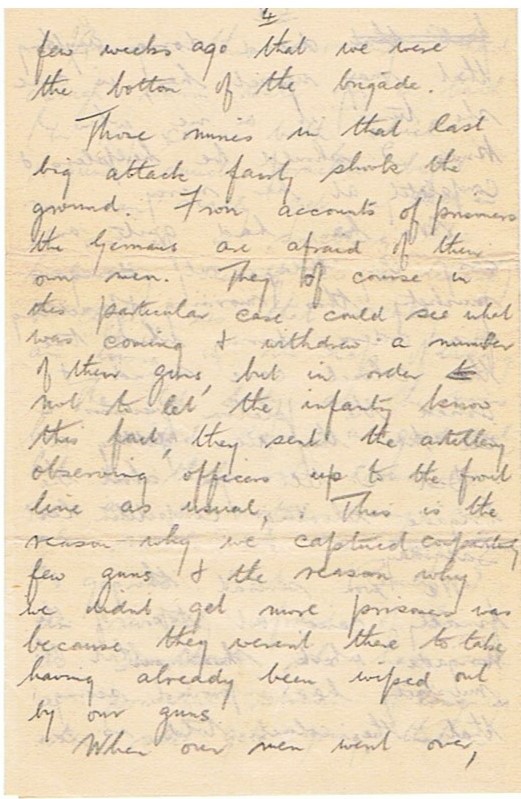 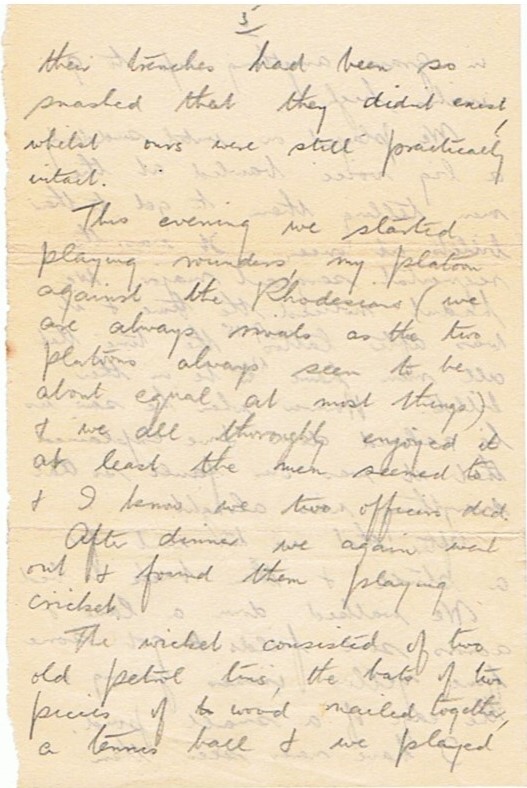 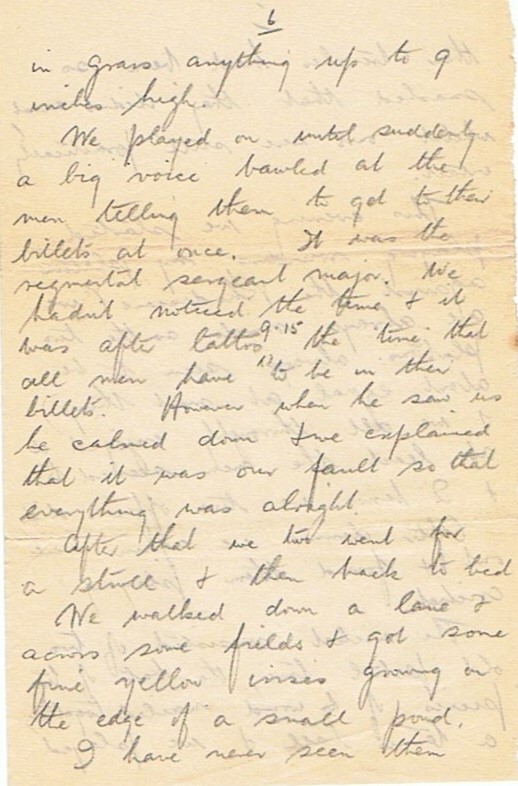 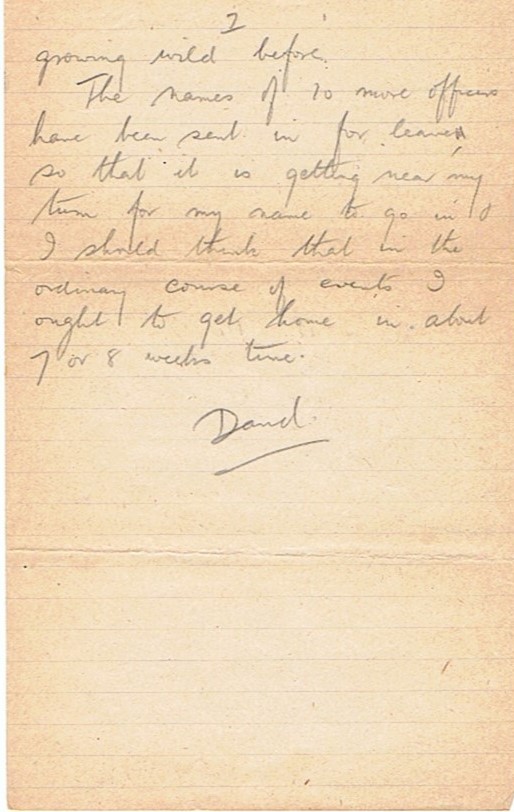 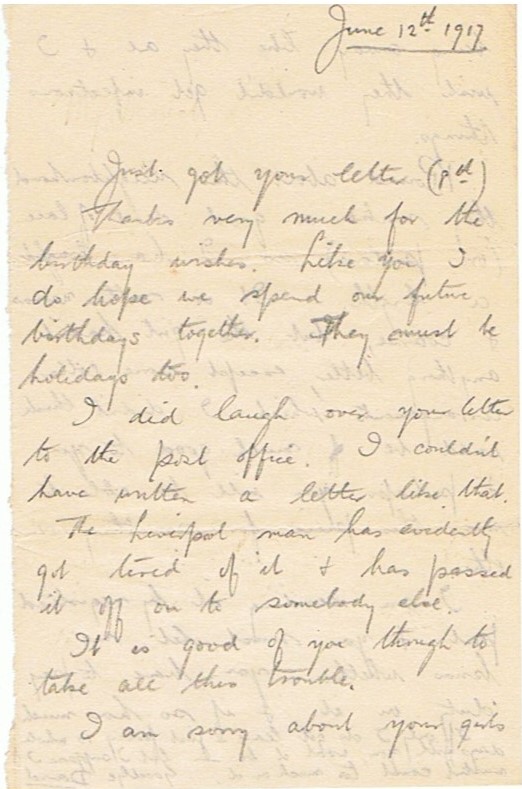 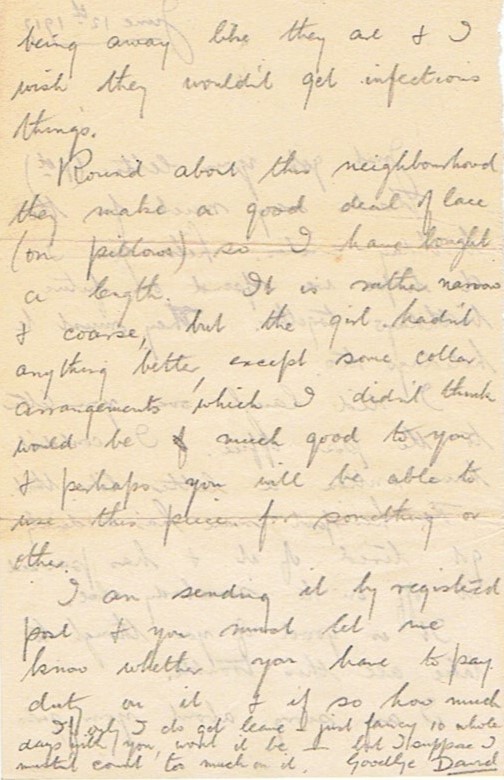 My present billet has I think been a girl’s school at one time. Anyhow there is a long dormitory with several rooms leading off it, all having small windows in the roof.

There are 3 of us, each having a room. My bed is beautifully soft. I think it must be feathers but I haven’t investigated that far, as I am somewhat afraid of stirring it up too much, as it is none too clean, the whole place isn’t for that matter, but out here a bed is a bed and you take it and thank your lucky stars you’ve got it.

However this morning I had enough warm water for a bath (in my canvas bath, which requests much practice before you can really get a bath in it, as it is something like balancing oneself in a teacup) and coffee, so that really I am living; in the lap of luxury.

The old lady at the mess has quieted down a good deal, but I think she looks upon me as a mortal enemy as she scowls at me every time I go in and out. Really I am mortally afraid of her as she has such a powerful stream of language when she gets going, that I dread doing anything that may upset her, in case she turns it on me, when I know I should be helpless and completely at her mercy.

We have had quite an easy day today only doing musketry this morning and practicing fire orders, during which time the colonel came round and asked the platoon questions to see how they were getting on.

Did I tell you about the brigade shooting competition last Saturday? We won several things and finally came out top of the brigade told us a few weeks ago that we were the bottom of the brigade.

Those mines in that last big attack fairly shook the ground. From accounts of prisoners the Germans are afraid of their own men. They of course in this particular case could see what was coming and withdrew a number of their guns, but in order not to let the infantry know this fact, they sent the artillery observing officers up to the front line as usual. This is the reason why we captured comparatively few guns and the reason why we didn’t get more prisoners was because they weren’t there to take having already been wiped out by our guns.

When our men went over, their trenches had been so smashed that they didn’t exist, whilst ours were still practically intact.

This evening we started playing rounders, my platoon against the Rhodesians, we are aIways rivals as the two platoons always seem to be about equal at most things) and we all thoroughly enjoyed it at least the men seemed to and I know we two officers did.

After dinner we again went out and found them playing cricket. The wicket consisted of two old petrol tins, the bats of two pieces of wood nailed together, a tennis ball and we played in grass anything up to 9 inches high.

We played on until suddenly a big voice bawled at the men telling them to get to their billets at once. It was the regimental sergeant major. We hadn’t noticed the time and it was after tattoo 9.15 the time that all men have to be in their billets. However when he saw us he calmed down and we explained that it was our fault so that everything was alright. After that we two went for a stroll and then back to bed.

We walked down a lane and across some fields and got some fine yellow irises growing on the edge of a small pond. I have never seen them growing wild before.

The names of 10 more officers have been sent in for leave, so that it is getting near my turn for my name to go in. I should think that in the ordinary course of events I ought to get home in about 7 or 8 weeks time.

Just got your letter (8th).

Thanks very much for the birthday wishes. Like you I do hope we spend our future birthdays together. They must be holidays too.

I did laugh over your letter to the post office. I couldn’t have written a letter like that. The Liverpool man has evidently got tired of it and has passed it off on to somebody else. It is good of you though to take all this trouble.

I am sorry about your girls being away like they are and I wish they wouldn’t get infectious things.

Round about this neighbourhood they make a good deal of lace (on pillows) so I have bought a length. It is rather narrow and coarse, but the girl hadn’t anything better, except some collar arrangements which I didn’t think would be much good to you and perhaps you will be able to use this piece for something or other. I am sending it by registered post and you must let me know whether you have to pay duty on it and if so how much.

If only I do get leave – just fancy 10 whole days with you, it would be ….but I suppose I mustn’t count too much on it.