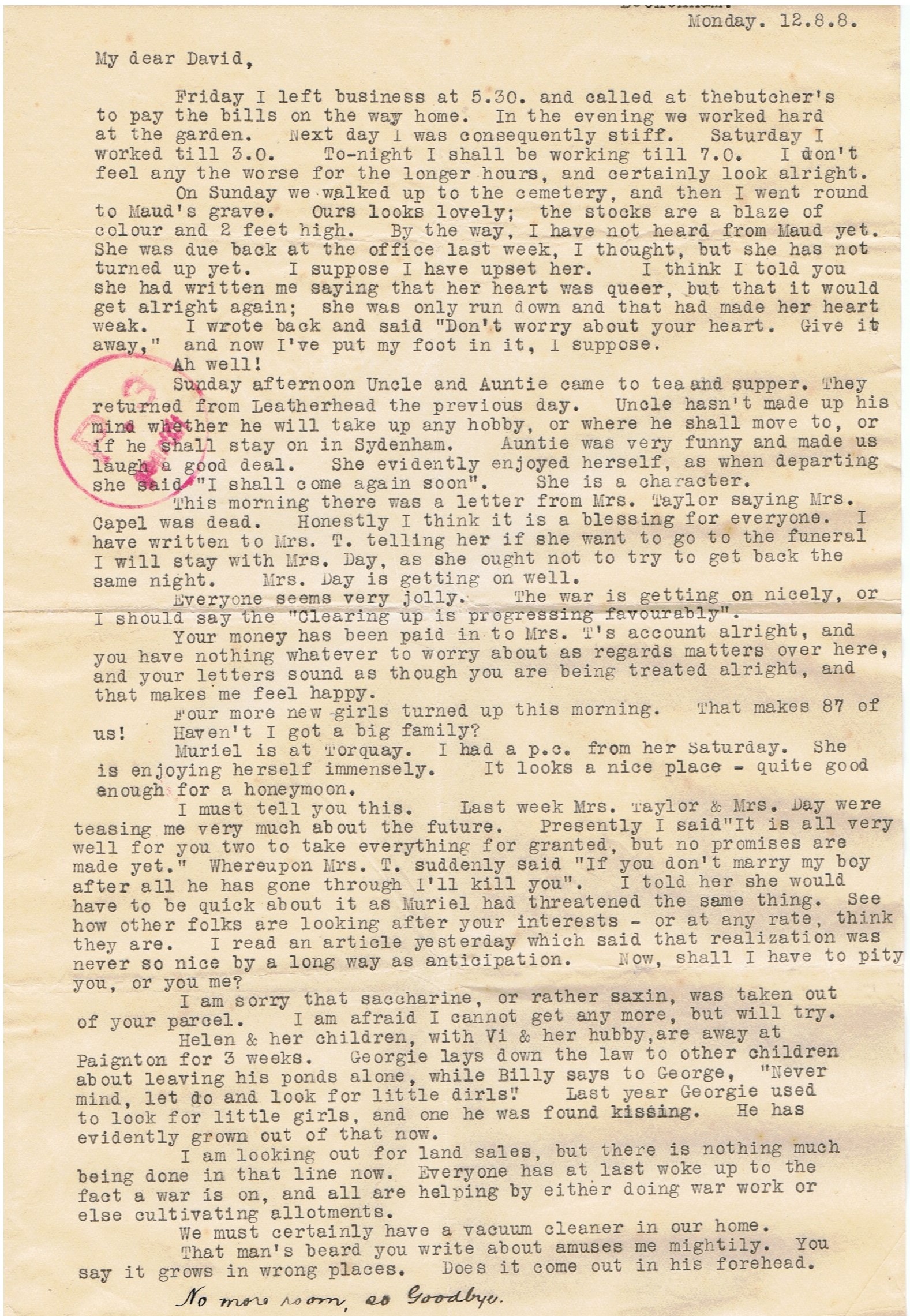 May to David Beckenham Letter No 153 12.8.18
My dear David,
Friday I left business at 5.30 and called at the butcher’s to pay the bills on the way home. In the evening we worked hard at the garden. Next day I was consequently stiff. Saturday I worked till 3.0. Tonight I shall be working till 7.0. I don’t feel any the worse for the longer hours, and certainly look alright.
On Sunday we walked up to the cemetery, and then I went round to Maud’s grave. Ours looks very lovely; the stocks are a blaze of colour and 2 feet high. By the way, I have not heard from Maud yet. She was due back at the office last week, I thought, but she has not turned up yet. I suppose I have upset her. I think I told you she had written me saying that her heart was queer, but that it would get alright again; she was only run down and that had made her heart weak. I wrote back and said “Don’t worry about your heart. Give it away,” and now I’ve put my foot in it, I suppose.
Ah well!
Sunday afternoon Uncle and Auntie came to tea and supper. They returned from Leatherhead the previous day. Uncle hasn’t made up his mind whether he will take up any hobby, or where he shall move to, or if he will stay on in Sydenham. Auntie was very funny and made us laugh a good deal. She evidently enjoyed herself, as when departing she said “I shall come again soon”. She is a character.
This morning there was a letter from Mrs Taylor saying Mrs Capel was dead. Honestly I think it is a blessing for everyone. I have written to Mrs T telling her if she want to go to the funeral I will stay with Mrs Day, as she ought not want to try to get back the same night. Mrs Day is getting on well.
Everyone seems very jolly. The war is getting on nicely, or I should say the “Clearing up is progressing favourably”.
Your money has been paid in to Mrs T’s account alright, and you have nothing whatever to worry about as regards matters over here, and your letters sound as though you are being treated alright, and that makes me feel happy.
Four new girls turned up this morning. That makes 87 of us! Haven’t I got a big family?
Muriel is at Torquay. I had a p.c. from her Saturday. She is enjoying herself immensely. It looks a nice place – quite good enough for a honeymoon.
I must tell you this. Last week Mrs Taylor & Mrs Day were teasing me very much about the future. Presently I said “It is all very well for you two to take everything for granted, but no promises are made yet.” Whereupon Mrs T suddenly said “If you don’t marry my boy after all he has gone through I’ll kill you”. I told her she would have to be quick about it as Muriel has threatened the same thing. See how other folks are looking after your interests – or at any rate, think they are. I read an article yesterday which said that realization was never so nice by a long way as anticipation. Now, shall I have to pity you, or you me?
I am sorry that saccharine, or rather saxin, was taken out of your parcel. I am afraid I cannot get any more, but will try.
Helen & her children, with Vi & her hubby, are away at Paignton for 3 weeks. Georgie lays down the law to other children about leaving his ponds alone, while Bills says to George, “Never mind, let do and look for little dirls”. Last year Georgie used to look for little girls, and one he was found kissing. He has evidently grown out of that now.
I am looking for land ales, but there is nothing much being done in that line now. Everyone has at last woke up to the fact a war is on, and all are helping by either doing war work or else cultivating allotments.
We must certainly have a vacuum cleaner in our home.
That man’s beard you write about amuses me mightily. You say it grows in wrong places. Does it come out of his forehead.
No more room, so Goodbye.
May