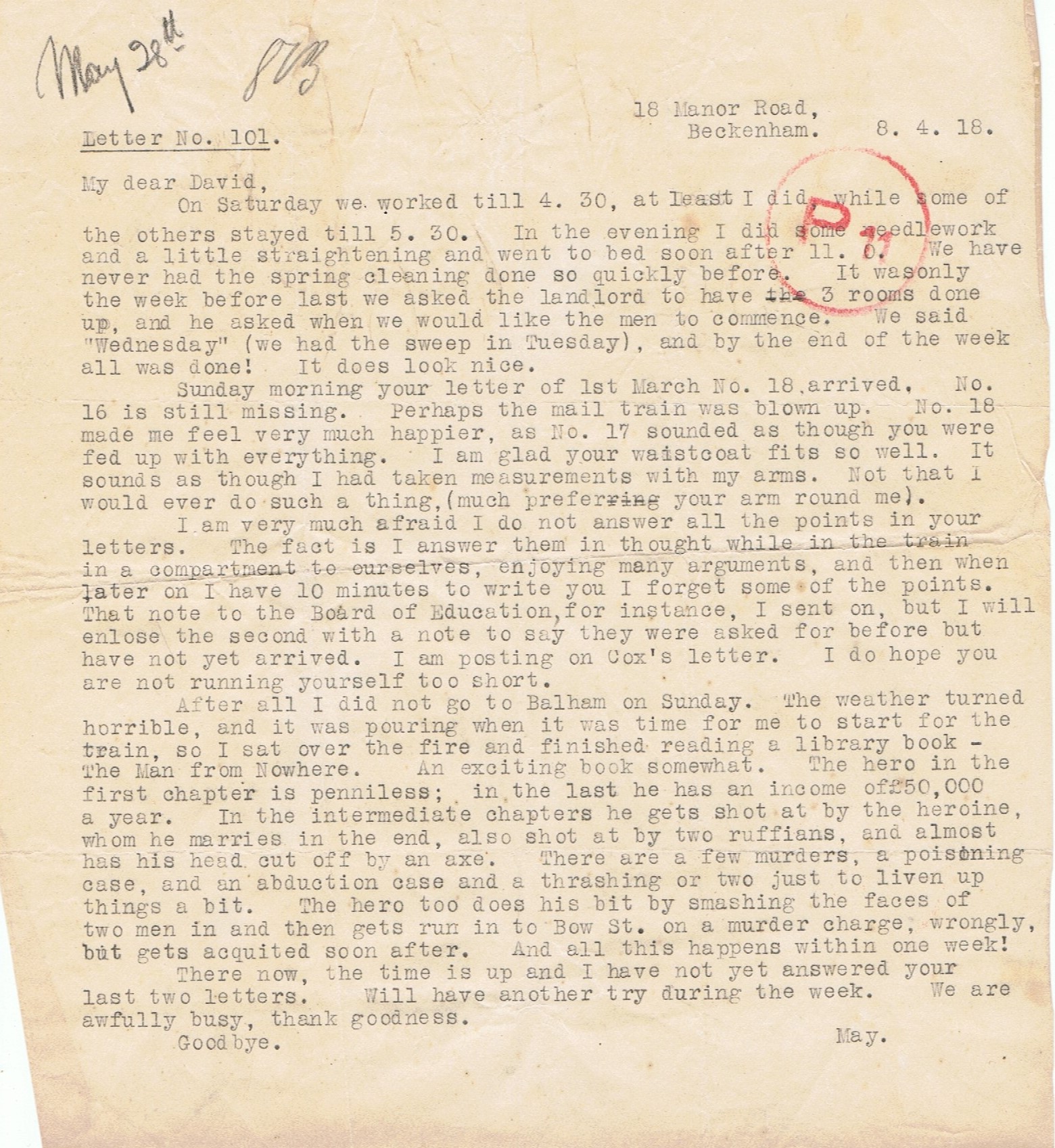 May to David 8.4.18 Letter No.101
My dear David,
On Saturday we worked till 4.30, at least I did while some of the others stayed till 5.30. In the evening I did some needlework and a little straightening and went to bed soon after 11.0. We have never had the spring cleaning done so quickly before. It was only the week before last we asked the landlord to have 3 rooms done up, and he asked when we would like the men to come. We said “Wednesday” (we had the sweep in Tuesday), and by the end of the week all was done! It does look nice.
Sunday morning your letter of 1st March No 18 arrived. No 16 is still missing. Perhaps the mail train was blown up. No 18 made me feel very much happier, as No 17 sounded as though you were fed up with everything. I am glad your waistcoat fits so well. It sounds as though I had taken measurements with my arms. Not that I would ever do such a thing, (much prefer your arm around me).
I am very much afraid I do not answer all the points n your letters. The fact is I answer them in thought while in the train in a compartment to ourselves, enjoying many arguments, and then when later on I have 10 minutes to write you I forget some of the points. That note to the Board of Education, for instance, I sent on, but I will enclose the second with a note to say they were asked for before but have not yet arrived. I am posting on Cox’s letter. I do hope you are not running yourself too short.
After all I did not go to Balham on Sunday. The weather turned horrible, and it was pouring when it was time for me to start for the train, so I sat over the fire and finished reading a library book – The Man from Nowhere. An exciting book somewhat. The hero in the first chapter is penniless; in the last he has an income of £50,000 a year. In the intermediate chapters he gets shot at by the heroine, whom he marries in the end, also shot at by two ruffians, and almost has his head cut off by an axe. There are a few murders, a poisoning case, and an abduction case and a thrashing or two just to liven up things a bit. The hero too does his bit by smashing the faces of the two men in and then gets run in to Bow St on a murder charge, wrongly, but gets acquitted soon after. And all this happens within one week!
There now, the time is up and I have not yet answered your last two letters. Will have another try during the week. We are awfully busy, thank goodness.
Goodbye
May