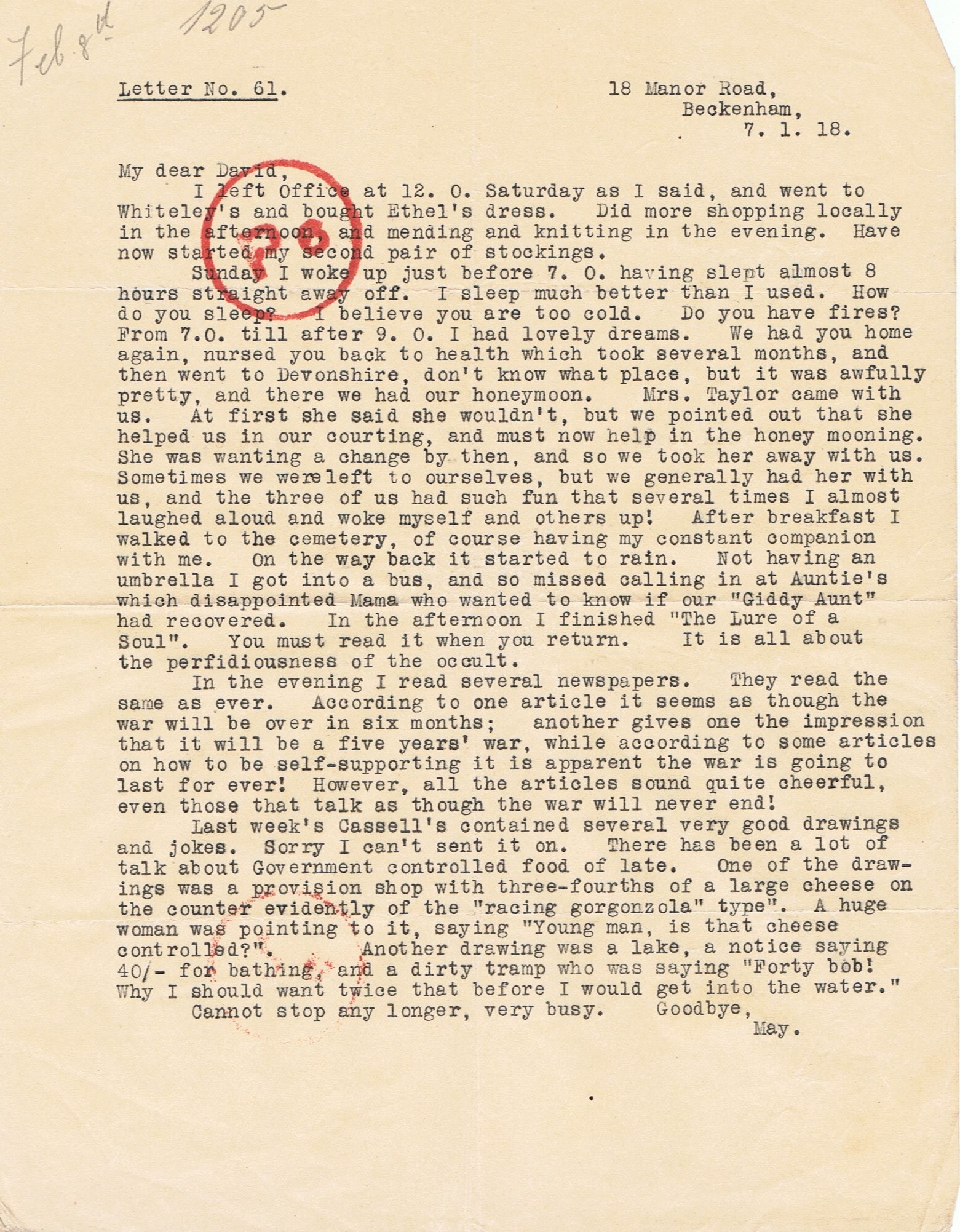 May to David Letter No. 61. 18 Manor Road, Beckenham, 7. 1. 18.
My dear David,
I left Office at 12. 0. Saturday as I said, and went to Whiteley ‘s and bought Ethel’s dress. Did more shopping locally in the afternoon and mending and knitting in the evening. Have now started on my second pair of stockings.
Sunday I woke up just before 7. 0. having slept almost 8 hours at straight away off. I sleep much better than I used. How do you sleep? I believe you are too cold. Do you have fires? From 7.0. till after 9. 0. I had lovely dreams. We had you home again, nursed you back to health which took several months, and then went to Devonshire, don’t know what place, but it was awfully pretty, and there we had our honeymoon. Mrs. Taylor came with us. At first she said she wouldn’t, but we pointed out that she helped us in our courting, and must now help in the honey mooning. She was wanting a change by then, and so we took her away with us. Sometimes we were left to ourselves, but we generally had her with us, and the three of us had such fan that several times I almost laughed aloud and woke myself and others up! After breakfast I walked to the cemetery, of course having my constant companion with me. On the way back it started to rain. Not having an umbrella I got into a bus, and so missed calling in at Auntie’s which disappointed Mama–who wanted to-know-If – our “Giddy Aunt” had recovered. In the afternoon I finished “The Lure of a Soul”. You must read it when you return. It is all about the perfidiousness of the occult.
In the evening I read several newspapers. They read the same as ever. According to one article it seems as though the war will be over in six months, another gives one the impression that it will be a five years’ war, while according to some articles on how to be self-supporting it is apparent the war is going to last for ever! However, all the articles sound quite cheerful, even those that talk as though the war will never end!
Last week’s Cassell’s contained several very good drawings and jokes. Sorry I can’t send it on. There has been a lot of talk about Government controlled food of late. One of the drawings was a provision shop with three-fourths of a large cheese on the counter evidently of the “racing gorgonzola” type. A huge woman was pointing to it, saying “Young man, is that cheese controlled?” Another drawing was a lake, a notice saying 40/- for bathing, and a dirty tramp who was saying “Forty bob! Why I should want twice that before I would get into the water.”
Cannot stop any longer, very busy. Goodbye,
May.