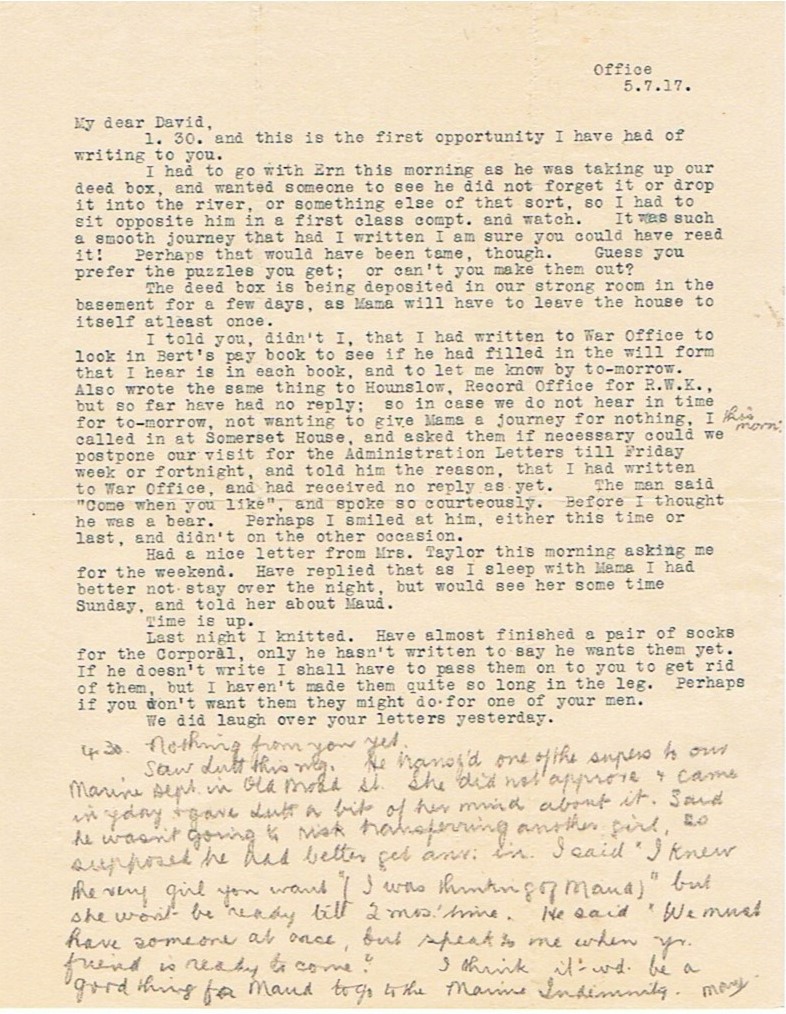 1.30 and this is the first opportunity I have had of writing to you.

I had to go with Ern this morning as he was taking up our deed box, and wanted someone to see he did not forget it or drop it in the river, or something else of that sort, so I had to sit opposite him in a first class compt. And watch. It was such a smooth journey that had I written I am sure you could have read it! Perhaps that would have been tame, though. Guess you prefer the puzzles you get; or can’t you make them out?

The deed box is being deposited in our strong room in the basement for a few days, as Mama will have to leave the house to itself at least once.

I told you, didn’t I, that I had written to War Office to look in Bart’s pay book to see if he had filled in the will form that I hear is in each book, and to let me know by tomorrow. Also wrote the same thing to Hounslow, Record Office for R.W.K., but so far have had no reply; so in case we do not hear in time for tomorrow, not wanting to give Mama a journey for nothing, I this morning called in at Somerset House, and asked them if necessary could we postpone our visit for the Administration Letters till Friday week or fortnight, and told him the reason, that I had written to War Office, and had received no reply as yet. The man said “Come when you like”, and spoke so courteously. Before I thought he was a bear. Perhaps I smiled at him, either this time or last, and didn’t on the other occasion.

Had a nice letter from Mrs. Taylor this morning asking me for the weekend. Have replied that as I sleep with Mama I had better not stay over the night, but would see her some time Sunday, and told her about Maud.

Last night I knitted. Have almost finished a pair of socks for the Corporal, only he hasn’t written to say he wants them yet. If he doesn’t write I shall have to pass them on to you to get rid of them, but I haven’t made them quite so long in the leg. Perhaps if you don’t want them they might do for one of your men.

We did laugh over your letters yesterday.

Saw Lutt this morning. He transferred one of the supers to our Marine Dept in Old Broad St. She did not approve and came in yesterday and gave Lutt a bit of her mind about it. Said he wasn’t going to risk transferring another girl. So suppose he had better get another in. I said “I knew the very girl you want” (I was thinking of Maud) “but she won’t be ready till 2 months time.” He said “We must have someone at once, but speak to me when your friend is ready to come.” I think it would be a good thing for Maud to go to the Marine Indemnity.