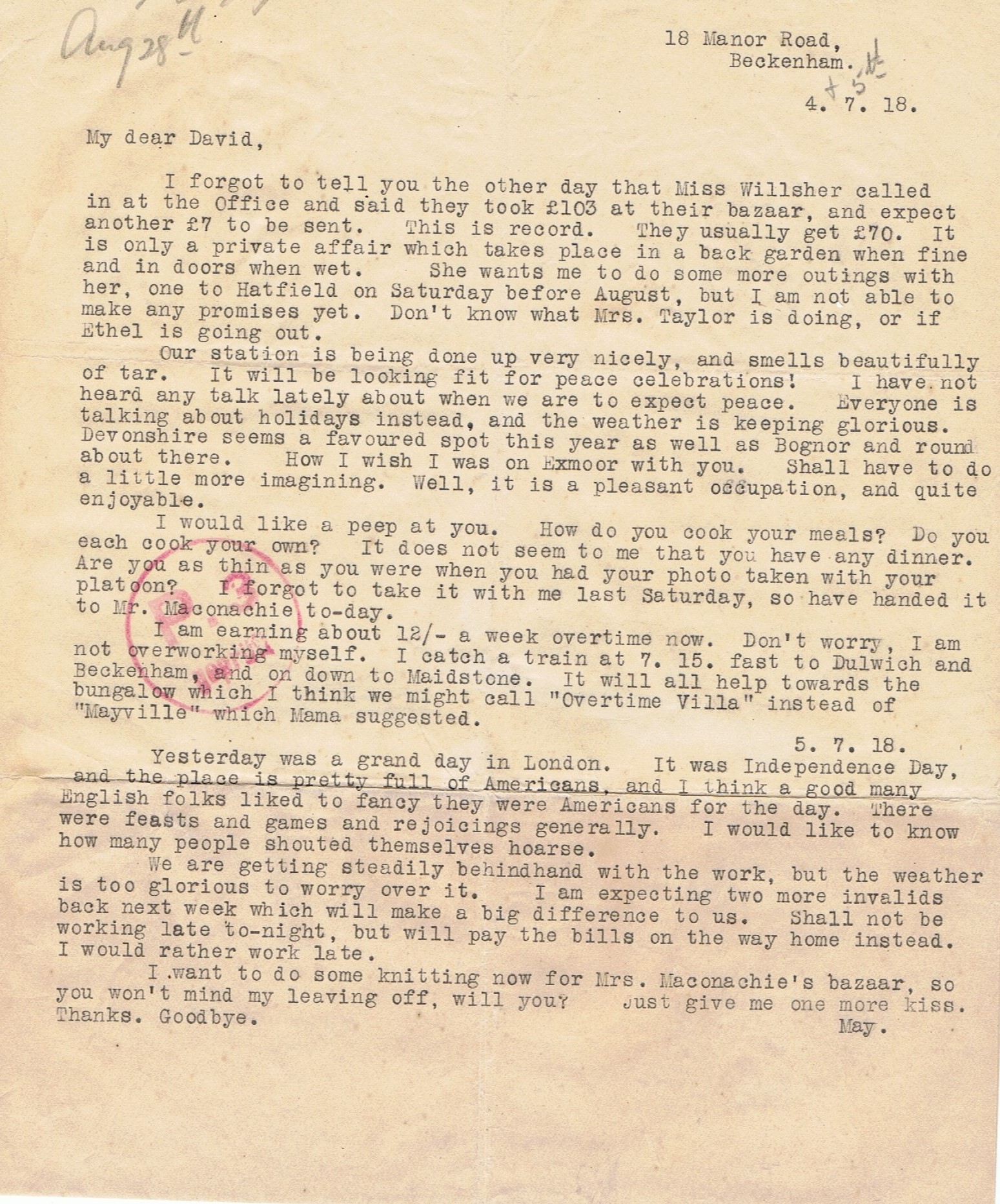 May to David Beckenham 4.7.18
My dear David,
I forgot to tell you the other day that Miss Willsher called in at the Office and said they took £103 at their bazaar, and expect another £7 to be sent. This is record. They usually get £70. It is only a private affair which takes place in a back garden when fine and in doors when wet. She wants me to do some more outings with her, one to Hatfield on Saturday before August, but I am not able to make any promises yet. Don’t know what Mrs Taylor is doing, or if Ethel is going out.
Our station is being done up very nicely, and smells beautifully of tar. It will be looking fit for peace celebrations! I have not heard any talk lately about when we are to expect peace. Everyone is talking about holidays instead, and the weather is keeping glorious. Devonshire seems a favoured spot this year as well as Bognor and round about there. How I wish I was on Exmoor with you. Shall have to do a little more imagining. Well, it is a pleasant occupation, and quite enjoyable.
I would like a peep at you. How do you cook your meals? Do you each cook your own? It does not seem to me that you have any dinner. Are you as thin as you were when you had your photo taken with your platoon? I forgot to take it with me last Saturday, so have handed it to Mr Maconachie to-day.
I am earning about 12/- a week overtime pay now. Don’t worry, I am not overworking myself. I catch a train at 7.15 fast to Dulwich and Beckenham, and on down to Maidstone. It will all help towards the bungalow which I think we might call “Overtime Villa” instead of “Mayville” which Mama suggested.
5.7.18
Yesterday was a grand day in London. It was Independence Day, and the place was pretty full of Americans for the day. There were feasts and games and rejoicings generally. I would like to know how many people shouted themselves hoarse.
We are getting steadily behind with the work, but the weather is too glorious to worry over it. I am expecting two more invalids back next week which will make a big difference to us. Shall not be working late ton-night, but will pay the bills on the way home instead. I would rather work late.
I want to do some knitting now for Mrs Maconachie’s bazaar, so you won’t mind my leaving off, will you? Just give me one more kiss. Thanks. Goodbye.
May