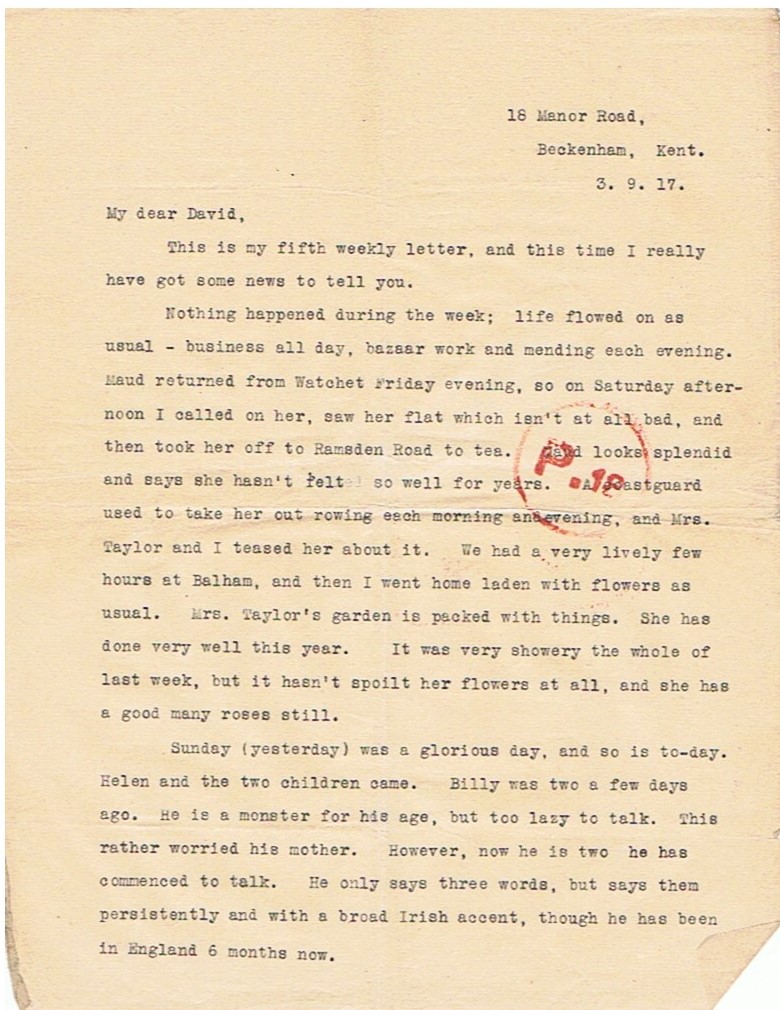 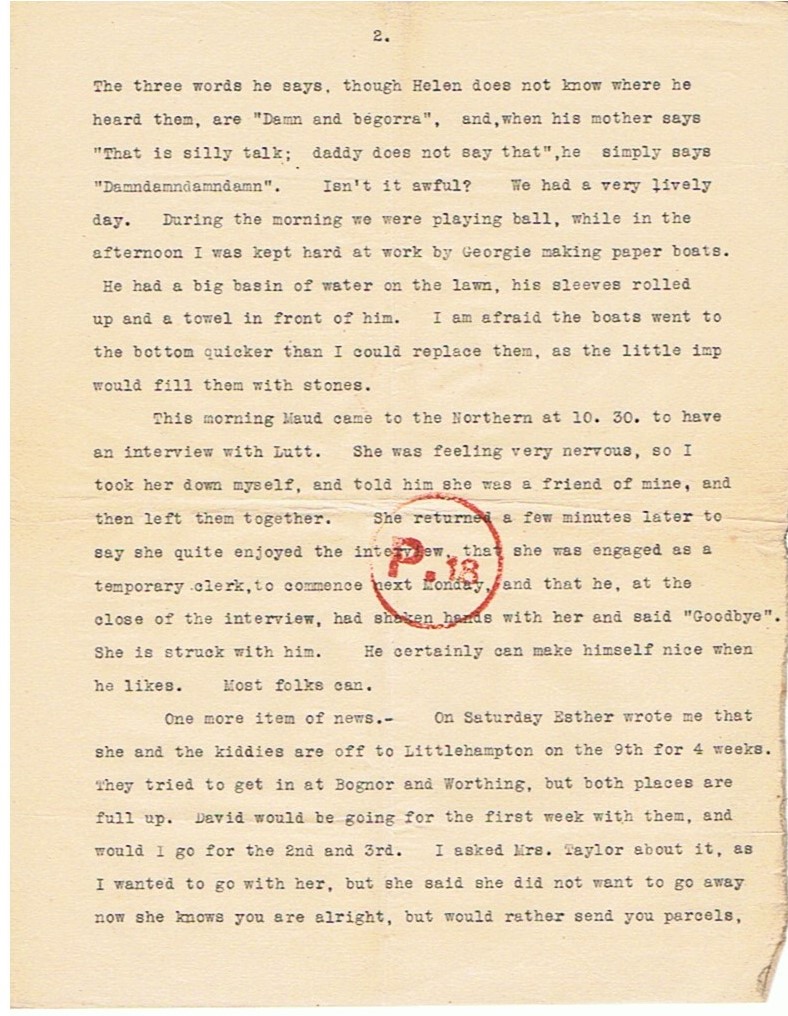 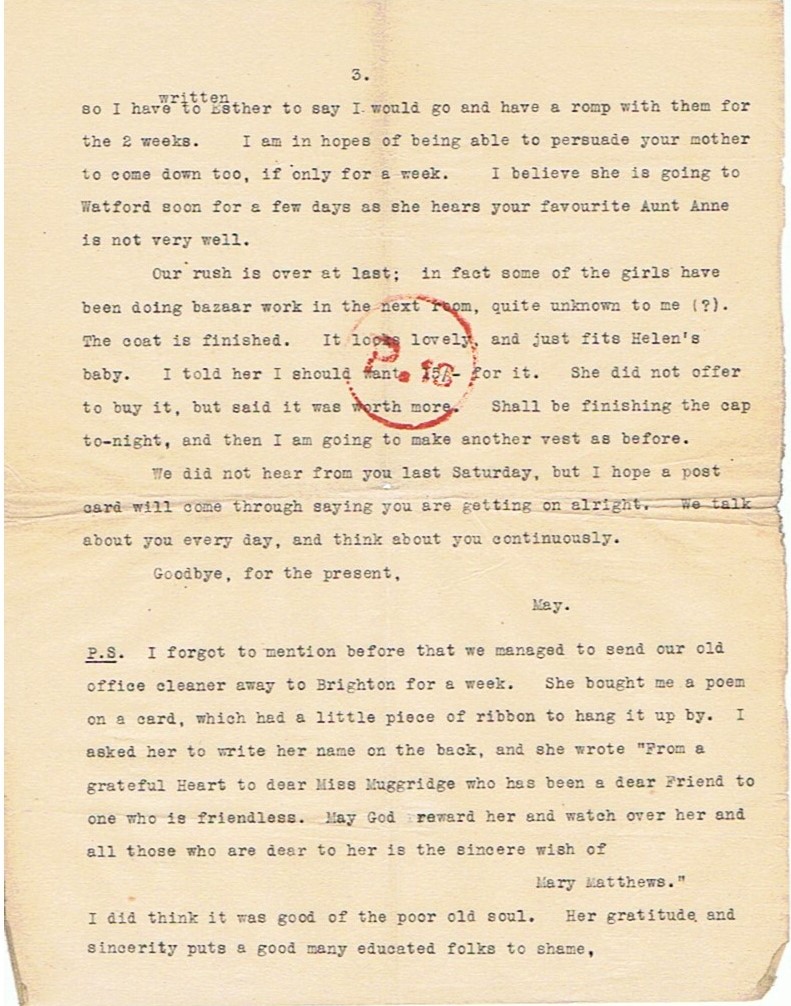 This is my fifth weekly letter, and this time I really have got some news to tell you.

Nothing happened during the week; life flowed on as usual – business all day, bazaar work and mending each evening. Maud returned from Watchet Friday evening, so on Saturday afternoon I called on her, saw her flat which isn’t at all bad, and then took her off to Ramsden Road to tea.   Maud looks, splendid and says she hasn’t felt so well for years. A coastguard used to take her out rowing each morning and evening, and Mrs Taylor and I teased her about it. We had a very lively few hours at Balham, and then I went home laden with flowers as usual.  Mrs Taylor’s garden is packed with things. She has done very well this year. It was very showery the whole of last week, but it hasn’t spoilt her flowers at all, and she has a good many roses still.

Sunday (yesterday) was a glorious day, and so is to-day. Helen and the two children came. Billy was two a few days ago. He is a monster for his age, but too lazy to talk. This rather worried his mother. However, now he is two he has commenced to talk. He only says three words, but says them persistently and With a broad Irish accent, though he has been in England 6 months now. The three words he says, though Helen does not know where he heard them, are “Damn and begorra”, and when his mother says “That is silly talk; daddy does not say that”, he simply says “Damndamndamndamn’. Isn’t it awful? We had a very lively day. During the morning we were playing ball, while in the afternoon I was kept hard at work by Georgie making paper boats. He had a big basin of water on the lawn, his sleeves rolled up and a towel in front of him. I am afraid the boats went to the bottom quicker than I could replace them, as the little imp would fill them with stones.

This morning Maud came to the Northern at 10. 30. to have an interview with Lutt. She was feeling very nervous, so I took her down myself, and told him she was a friend of mine, and then left them together. She return a few minutes later to say she quite enjoyed the interview, that she was engaged as a temporary clerk, to commence next Monday and that he, at the close of the interview, had shaken hands with her and said “Goodbye”. She is struck with him. He certainly can make himself nice when he likes. Most folks can.

One more item of news. On Saturday Esther wrote me that she and the kiddies are off to Littlehampton on the 9th for 4 weeks. They tried to get in at Bognor and Worthing, but both places are full up. David would be going for the first week with them, and would I go for the 2nd and 3rd.            I asked Mrs. Taylor about it, as I wanted to go with her, but she said she did not want to go away now she knows you are alright, but would rather send you parcels, so I have written to Esther to say I would go and have a romp with them for the 2 weeks. I am in hopes of being able to persuade your mother to come down too, if only for a week.     I believe she is going to Watford soon for a few days as she hears your favourite Aunt Anne is not very well.

We did not hear from you last Saturday, but I hope a post card will come through saying you are getting on alright. We talk about you every day, and think about you continuously.

Goodbye, for the present,

P.S. I forgot to mention before that we managed to send our old office cleaner away to Brighton for a week. She bought me a poem on a card, which had a little piece of ribbon to hang it up by. I asked her to write her name on the back, and she wrote “From a grateful Heart to dear Miss Muggridge who has been a dear Friend to one who is friendless. My God reward her and watch over her and all those who are dear to her is the sincere wish of Mary Matthews.”

I did think it was good of the poor old soul. Her gratitude, and sincerity puts a good many educated folks to shame.