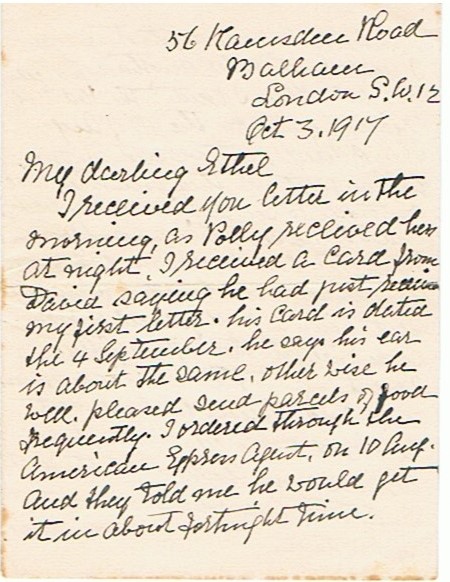 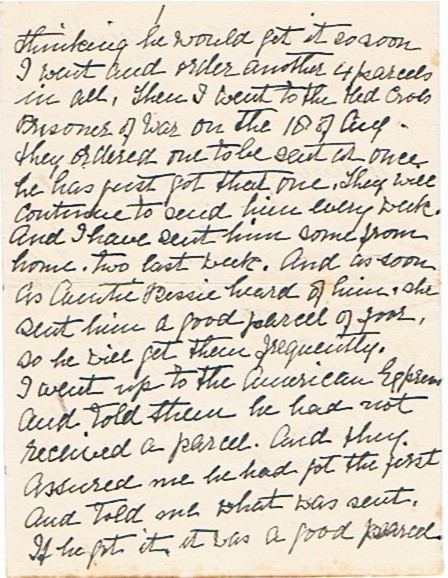 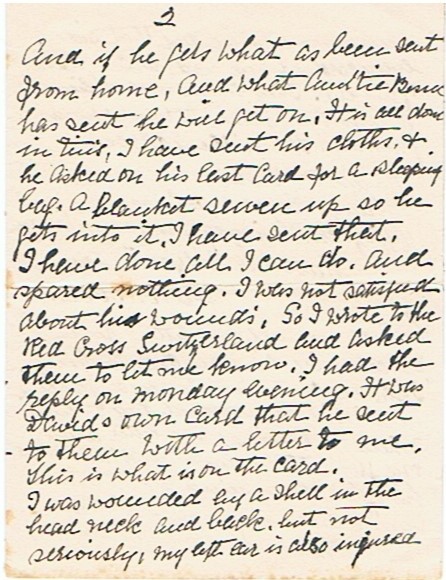 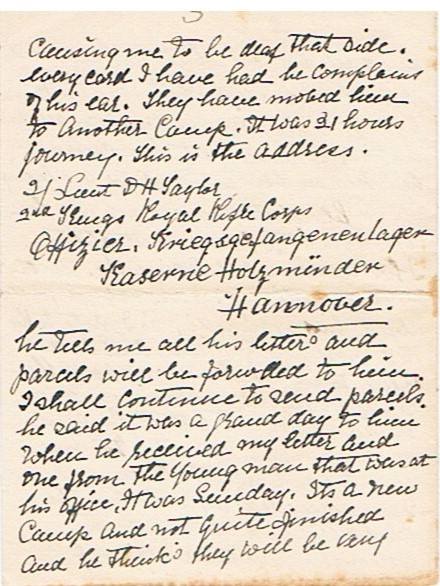 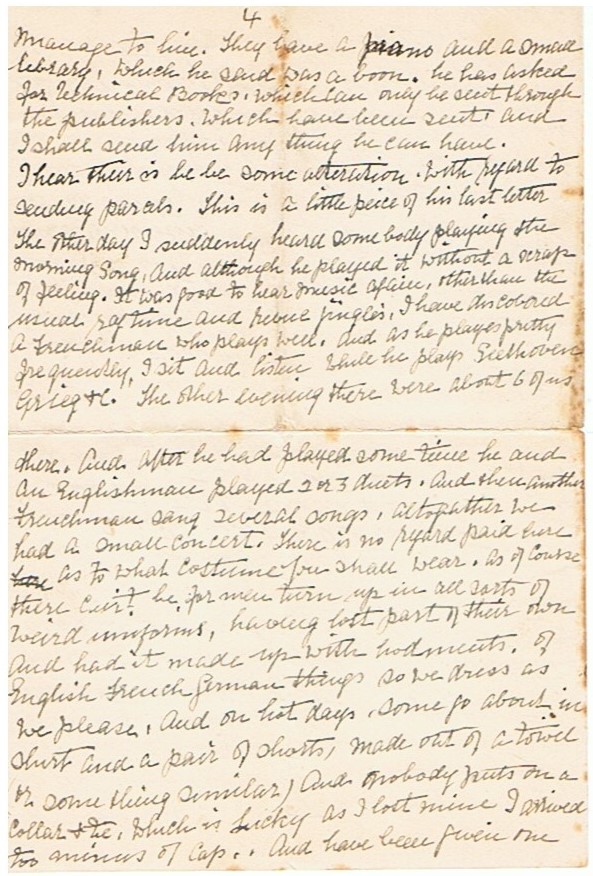 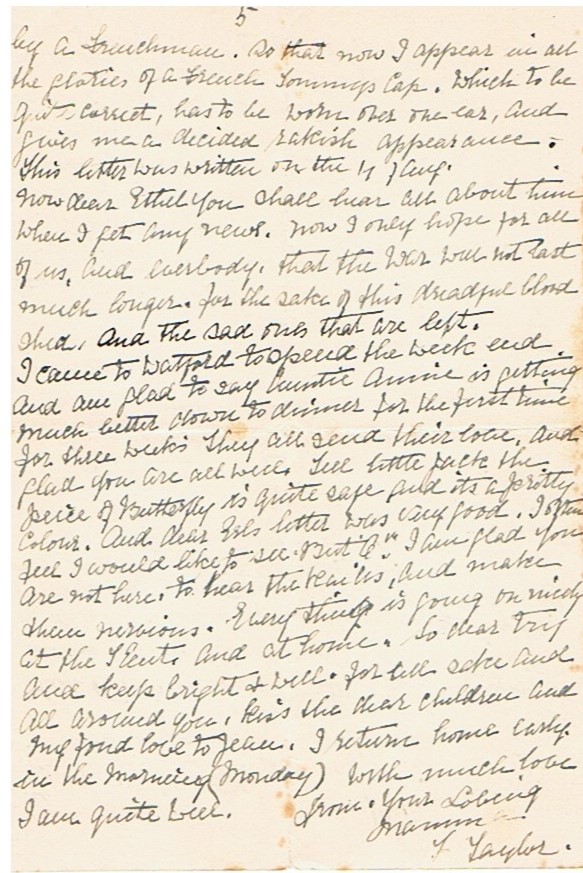 I received your letter in the morning, as Polly received hers at night. I received a card from David saying he had just received my first letter, his card is dated the 4 September, he says his ear is about the same, otherwise he is well, pleased send parcels of food frequently. I ordered through the American Express Agent, on 10 Aug, and they told me he would get it in about fortnight time. Thinking he would get it so soon I went and order another 4 parcels in all. Then I went to the Red Cross Prisoner of War on the 18 of Aug. They ordered one to be sent at once, he has just got that one. They will continue to send him every week. And I have sent him some from home, two last week. And as soon as Aunt Bessie heard of him, she sent him a good parcel of food, so he will get them frequently.

I went up to the American Express and told them he had not received a parcel, and they assured me he had got the first and told me what was sent. If he got it, it was a good parcel. And if he gets what as been sent from home, and what Auntie Bessie has sent he will get on. It is all done in tins, I have sent his cloths, and he asked on his last card for a sleeping bag, a blanket sewn up so he gets into it. I have sent that.

I have done all I can do, and spared nothing. I was not satisfied about his wounds. So I wrote to the Red Cross Switzerland and asked them to let me know. I had the reply on Monday evening. It was David’s own card that he sent to them with a letter to me. This is what is on the card.
I was wounded by a shell in the head neck and back, but not seriously, my left ear is also injured causing me to be deaf that side.
Every card I have had he complained of his ear. They have moved him to another Camp. It was 21 hours journey. This is the address.
2/ Lieut D H Taylor
2nd Kings Royal Rifle Corps
Offizier. Kriegsgefangenenlager
Kaserne Holzminder
Hanover
He tells me all his letters and parcels will be forwarded to him. I shall continue to send parcels, he said it was a grand day to him when he received my letter and one from the young man that was at his office. It was Sunday. It’s a new Camp and not quite finished and he thinks they will be very manage to live. They have a piano and a small library, which he said was a boon. He has asked for technical books which can only be sent through the publishers, which have been sent and I shall send him anything he can have. I hear there is to be some alteration with regard to sending parcels.

This is a little piece of his last letter: The other day I suddenly heard somebody playing the Morning Sing, and although he played it without a scrap of feeling, it was good to hear music again, other than the usual ragtime and revue jingles. I have discovered a Frenchman who plays well, and as he plays pretty frequently, I sit and listen while he plays Beethoven Grieg etc. The other evening there were about 6 of us there, and after he had played sometime he and an Englishman played 2 or 3 duets. And then another Frenchman sang several songs, altogether we had a small concert. There is no regard paid here as to which costume you shall wear, as of course there can’t be for men turn up in all sorts of weird uniforms, having lost part or their own and had it made up with oddments of English French German things so we dress as we please, and on hot days some go about in shirt and a pair of shorts, made out of a towel (or something similar) and nobody puts on a collar etc, which is lucky as I lost mine. I arrived too minus a cap and have been given one by a Frenchman, so that I now appear in all the glories of a French Tommys cap, which to be correct, has to be worn over the ear, and gives me a decided rakish appearance.

This letter was written on the 4th of Aug.

Now dear Ethel you shall hear all about him when I get any news. Now I only hope for all of us, and everybody, that the War will not last much longer, for the sake of this dreadful bloodshed, and the sad ones that are left.

I came to Watford to spend the weekend and am glad to say Auntie Annie is getting much better down to dinner for the first time for three weeks. They all send their love, and glad you are well. Tell little Jack the piece of butterfly is quite safe and it’s a pretty colour. And dear Erls letter was very good. I often feel I would like to see “But Q”. I am glad you are not here, to hear the [?] and make them nervous. Everything is going on nicely at the [?] and at home. So dear try and keep bright as well for all sake and all around you. Kiss the dear children and my fond love to John. I return home early in the morning (Monday). I am quite well.

With much love from your loving Mama