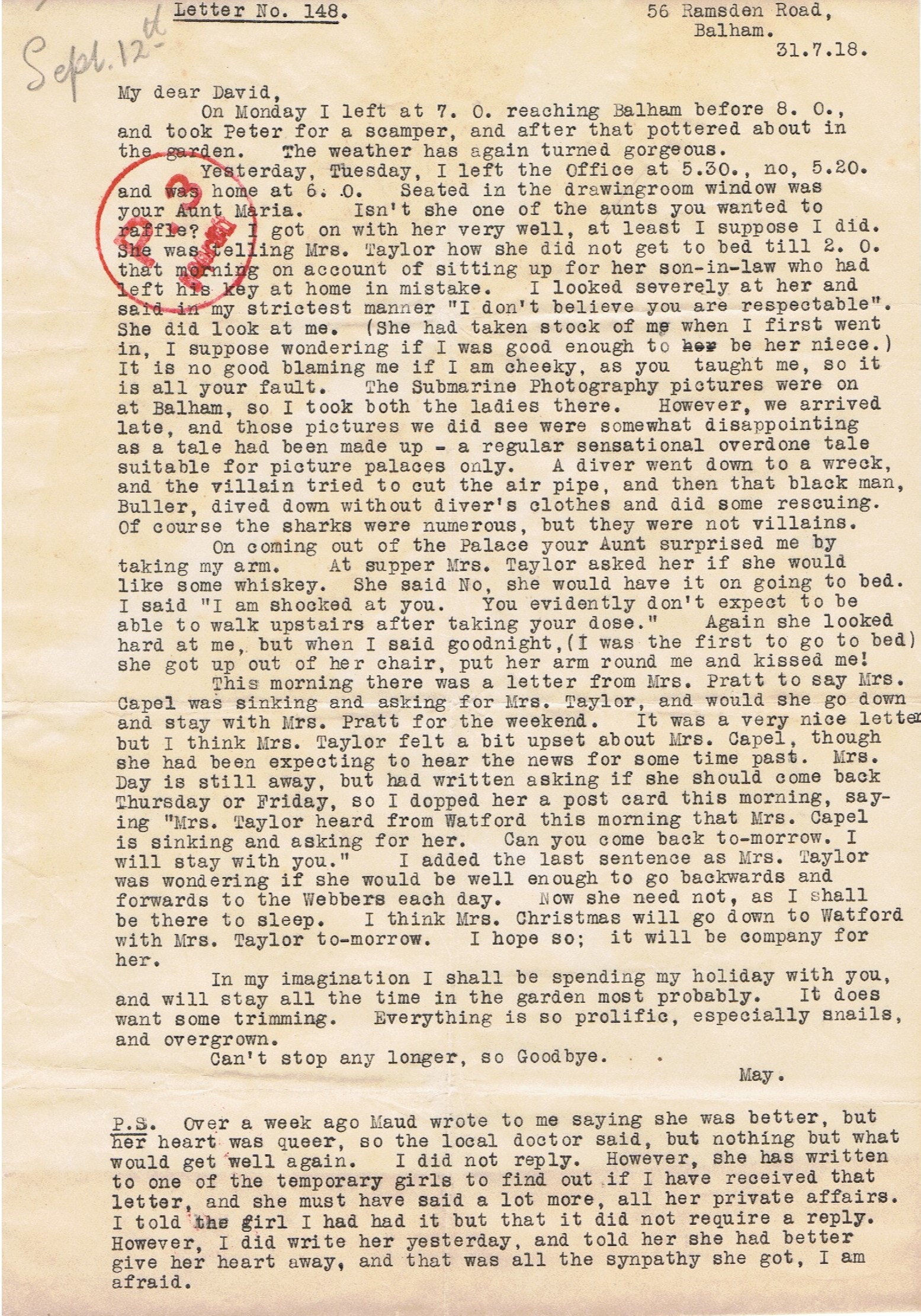 May to David Balham Letter No 148 31.7.18
My dear David,
On Monday I left at 7.0 reaching Balham before 8.0, and took Peter for a scamper, and after that pottered about in the garden. The weather has again turned gorgeous.
Yesterday, Tuesday, I left the Office at 5.30, no, 5.20 and was home at 6.0. Seated in the drawing room window was your Aunt Maria. Isn’t she the one of the aunts you wanted to raffle? I got on with her very well, at least I suppose I did. She was telling Mrs Taylor how she did not get to bed till 2.0 that morning on account of sitting up for her son-in-law who had left his key at home in mistake. I looked severely at her and said in my strictest manner “I don’t believe you are respectable”. She did look at me. (She had taken stock of me when I first went in, I suppose wondering if I was good enough to be her niece.) It is no good blaming me if I am cheeky, as you taught me, so it is all your fault. The Submarine Photography pictures were on at Balham, so I took both the ladies there. However, we arrived late, and those pictures we did see were somewhat disappointing as a tale had been made up – a regular sensational overdone tale suitable for picture palaces only. A diver went down to a wreck, and the villain tried to cut the air pipe, and then that black man, Buller, dived down without diver’s clothes and did some rescuing. Of course the sharks were numerous, but they were not villains.
On coming out of the Palace your Aunt surprised me by taking my arm. At supper Mrs Taylor asked her if she would like some whiskey. She said No, she would have it on going to bed. I said “I am shocked at you. You evidently don’t expect to be able to walk upstairs after taking your dose.” Again she looked hard at me, but when I said goodnight, (I was the first to go to bed) she got up out of her chair, put her arm round me and kissed me!
This morning there was a letter from Mrs Pratt to say Mrs Capel was sinking and asking for Mrs Taylor, and would she go down and stay with Mrs Pratt for the weekend. It was a very nice letter but I think Mrs Taylor felt a bit upset about Mrs Capel, though she had been expecting to hear the news for some time past. Mrs Day is still away, but had written asking if she should come back Thursday or Friday, so I dropped her a post card this morning, saying “Mrs Taylor heard from Watford this morning that Mrs Capel is sinking and asking for her. Can you come back to-morrow. I will stay with you.” I added the last sentence as Mrs Taylor was wondering if she would be well enough to go backwards and forwards to the Webbers each day. Now she need not, as I shall be there to sleep. I think Mrs Christmas will go down to Watford with Mrs Taylor tomorrow. I hope so; it will be company for her.
In my imagination I shall be spending my holiday with you, and will stay all the time in the garden most probably. It does want some trimming. Everything is so prolific, especially the snails, and overgrown.
Can’t stop any longer, so Goodbye.
May
PS Over a week ago Maud wrote to me saying she was better, but her heart was queer, so the local doctor said, but nothing what would get well again. I did not reply. However, she has written to one of the temporary girls to find out if I have received that letter, and she must have said a lot more, all her private affairs. I told the girl I had had it but that it did not require a reply. However, I did write her yesterday, and told her she had better give her heart away, and that was all the sympathy she got, I am afraid.