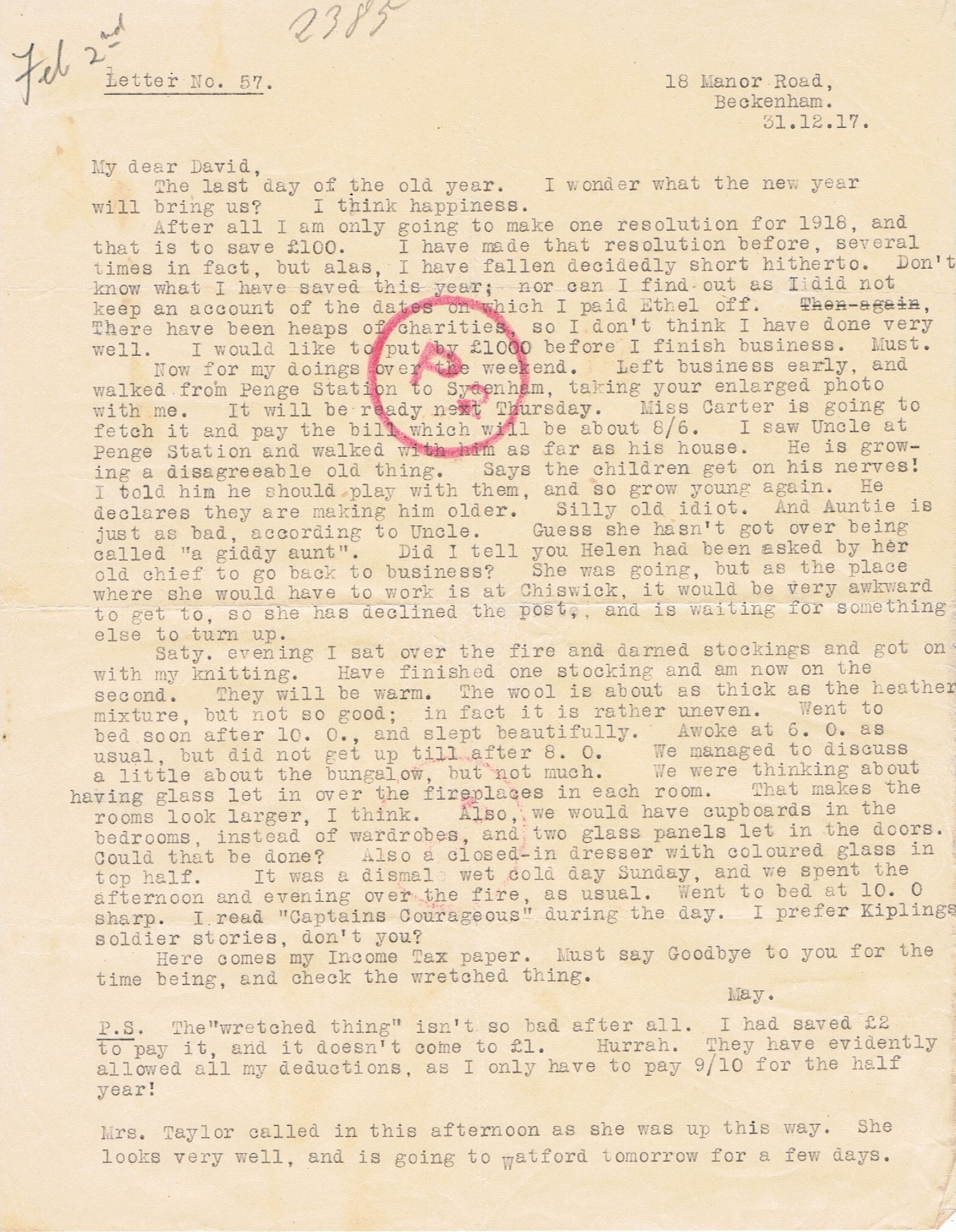 May to David Beckenham 31.12.17 letter No. 57.
My dear David,
The last day of the old year. I wonder what the new year will bring us? I think happiness.
After all I am only going to make one resolution for 1918, and that is to save £100. I have made that resolution before, several times in fact, but alas, I have fallen decidedly short hitherto. Don’t know what I have saved this year; nor can I find out as I did not keep an account of the dates on which I paid Ethel off. There have been heaps of charities, so I don’t think I have done very well. I would like to put by £1000 before I finish business. Must.
Now for my doings over the weekend. Left business early, and walked from Penge Station to Sydenham, taking your enlarged photo with me. It will be ready next Thursday. Miss Carter is going to fetch it and pay the bill which will be about 8/6. I saw Uncle at Penge Station and walked with him as far as his house. He is growing a disagreeable old thing. Says the children get on his nerves! I told him he should play with them, and so grow young again. He declares they are making him older. Silly old idiot. And Auntie is just as bad, according to Uncle. Guess she hasn’t got over being called “a giddy aunt”. Did I tell you Helen had been asked by her old chief to go back to business? She was going, but as the place where she would have to work is at Chiswick, it would be very awkward to get to, so she has declined the post, and is waiting for something else to turn up.
Saturday evening I sat over the fire and darned stockings and got on with my knitting. Have finished one stocking and am now on the second. They will be warm. The wool is about as thick as the heather mixture, but not as good; in fact it is rather uneven. Went to bed soon after 10.0, and slept beautifully. Awoke at 6.0 as usual, but did not get up till after 8.0. We managed to discuss a little about the bungalow, but not much. We were thinking about having glass let in over the fireplaces in each room. That makes the rooms look larger, I think. Also, we would have cupboards in the bedrooms, instead of wardrobes, and two glass panels let in the doors. Could that be done? Also a closed-in dresser with coloured glass in top half. It was a dismal wet cold day Sunday, and we spent the afternoon and evening over the fire, as usual. Went to bed at 10.0 sharp. I read ‘Captains Courageous’ during the day. I prefer Kiplings soldier stories, don’t you?
Here comes my Income Tax paper. Must say Goodbye for the time being, and check the wretched thing.
May
P.S. The “wretched thing” isn’t so bad after all. I had saved £2 to pay it and it doesn’t come to £1. Hurrah. They have evidently allowed all my deductions, as I only have to pay 9/10 for the half year!
Mrs Taylor called in this afternoon as she was up this way. She looks very well, and is going to Watford tomorrow for a few days.