2nd May 2017 Travelling in cattle trucks

2nd May 2017 Travelling in cattle trucks 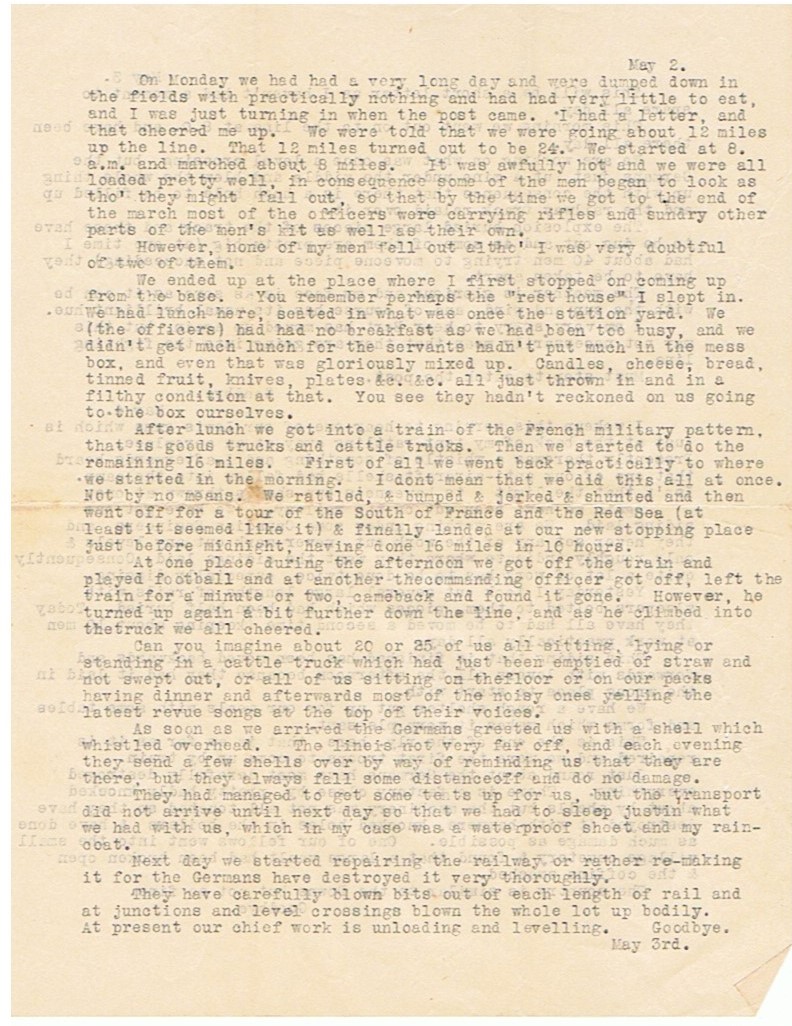 On Monday we had had a very long day and were lumped down in the fields with practically nothing and had had very little to eat, and I was just turning in when the post came. I had a letter, and that cheered me up.  We were told that we were going about 12 miles up the line. That 12 miles turned out to be 24. We started at 8.a.m. and marched about 8 miles. It was awfully hot and we were all loaded pretty well, in consequence some of the men began to look as tho’ they might fall out, so that by the time we got to the end of the march most of the officers were carrying rifles and sundry other parts of the men’s kit as well as their own.

However, none of my men fell out altho’ I was very doubtful of two of them.

We ended up at the place where I first stopped on coming up from the base. You remember perhaps the “rest house” I slept in. We had lunch here, seated in what was once the station yard. We (the officers) had had no breakfast as we had been too busy, and we didn’t get much lunch for the servants hadn’t put much in the mess box, and even that was gloriously mixed up. Candles, cheese, bread, tinned fruit, knives, plates &c. &c. all just thrown in and in a filthy condition at that. You see they hadn’t reckoned on us going to the box ourselves.

After lunch we got into a train of the French military pattern, that is goods trucks and cattle trucks. Then we started to do the remaining 16 miles. First of all vie went back practically to where we started in the morning. I dont mean that we did this all at once. Not by no means. We rattled, & bumped & jerked & shunted and then went off for a tour of the South of France and the Red Sea (at least it seemed like it) & finally landed at our new stopping place just before midnight, having done 16 miles in 10 hours.

At one place during the afternoon we got off the train and played football and at another the commanding officer got off, left the train for a minute or two, came back and found it gone. However, he turned up again a bit further down the line, and as he climbed into the truck we all cheered.

Can you imagine about 20 or 25 of us all sitting, lying or standing in a cattle truck which had just been emptied of straw and not swept out, or all of us sitting on the floor or on our packs having dinner and afterwards most of the noisy ones yelling the latest revue songs at the top of their voices.

As soon as we arrived the Germans greeted us with a shell which whistled overhead. The line is not very far off, and each evening they send a few shells over by way of reminding us that they are there, but they always fall some distance off and do no damage.

They had managed to get some tents up for us, but the transport did not arrive until next day so that we had to sleep just in what we had with us, which in my case was a waterproof sheet and my rain-coat.

Next day we started repairing the railway or rather re-making it for the Germans have destroyed it very thoroughly.

They have carefully blown bits out of each length of rail and at junctions and level crossings blown the whole lot up bodily. At present our chief work is unloading and levelling.         Goodbye.