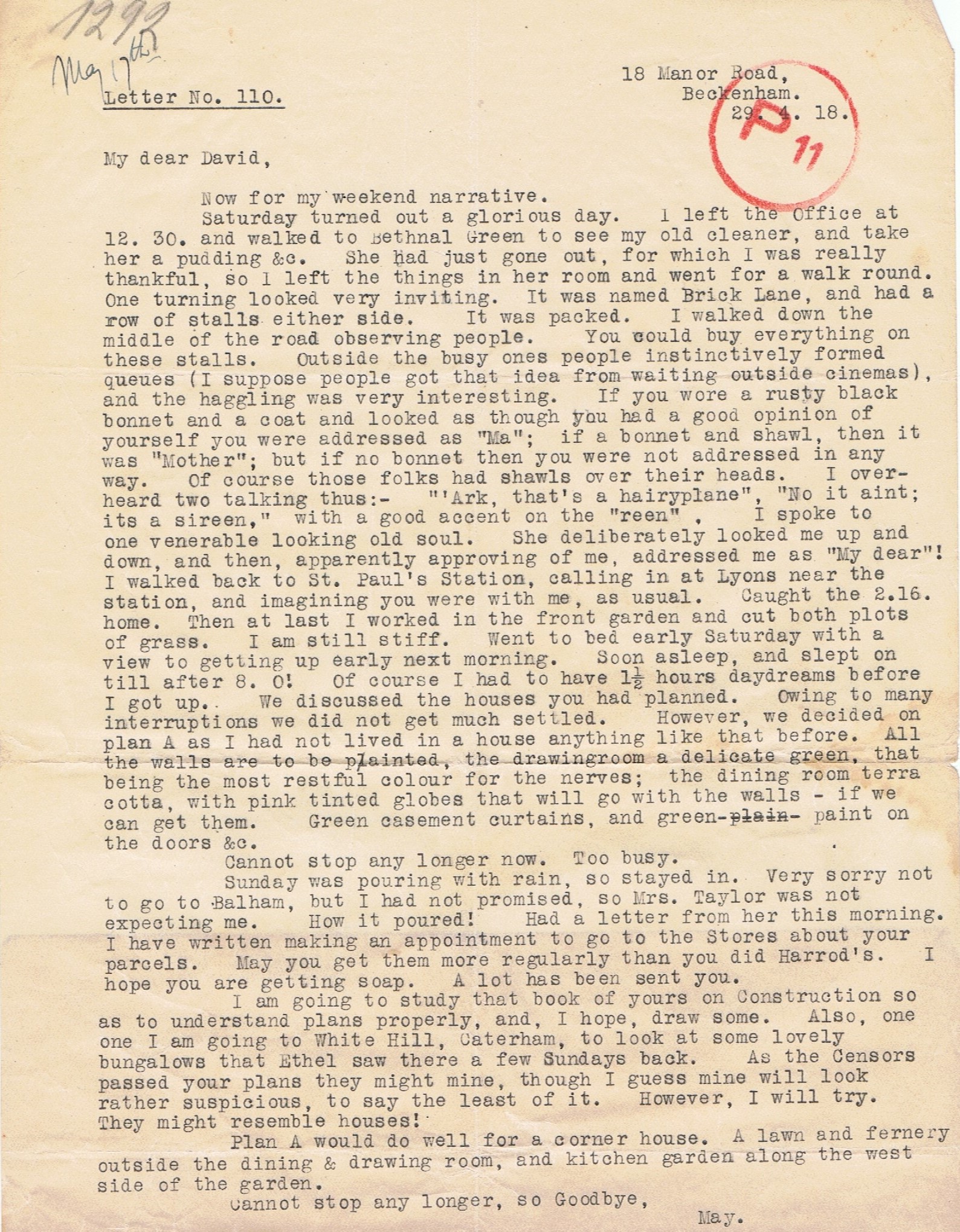 May to David 29.4.18 Letter No 110
My dear David,
Now for my weekend narrative.
Saturday turned out to be a glorious day. I left the office at 12.30 and walked to Bethnal Green to see my old cleaner, and take her a pudding &c. She had just gone out, for which I was really thankful, so I left the things in her room and went for a walk round. One turning looked very inviting. It was named Brick Lane, and had a row of stalls either side. It was packed. I walked down the middle of the road observing people. You could buy everything on these stalls. Outside the busy ones people instinctively formed queues (I suppose people got that idea from waiting outside cinemas), and the haggling was very interesting. If you wore a rusty black bonnet and a coat and looked as though you had a good opinion of yourself you were addressed as “Ma”; if a bonnet and shawl, then it was “Mother”; but if no bonnet then you were not addressed in any way. Of course those folks had shawls over their heads. I overheard two talking thus:- “’Ark, that’s a hairyplane”, “No, it ain’t; its a siren,” with a good accent on the “reen”. I spoke one venerable looking old soul. She deliberately looked me up and down, and then, apparently approving of me, addressed me as “My dear”! I walked back to St Paul’s Station, calling in at Lyons near the station, and imagined you were with me as usual. Caught the 2.16 home. Then at last I worked in the front garden and cut both plots of grass. I am still stiff. Went to bed early Saturday with a view to getting up early next morning. Soon asleep, and slept on till after 8.0! Of course I had to have 1 ½ hours daydreams before I got up. We discussed the houses you have planned. Owing to many interruptions we did not get much settled. However, we decided on plan A as I had not lived in a house anything like that before. All the walls are to be painted, the drawing room a delicate green, that being the most restful colour for the nerves; the dining room terra cotta, with pink tinted globes that will go with the walls – if we can get them. Green casement curtains, and green paint on the doors &c.
Cannot stop any longer now. Too busy.
Sunday was pouring with rain, so stayed in. Very sorry not to go to Balham, but I had not promised, so Mrs Taylor was not expecting me. How it poured! Had a letter from her this morning. I have written making an appointment to go to the Stores about your parcels. May you get them more regularly than you did Harrod’s. I hope you are getting soap. A lot has been sent you.
I am going to study that book of yours on Construction so as to understand plans properly, and, I hope, draw some. Also, one one I am going to White Hill, Caterham, to look at some lovely bungalows that Ethel saw there a few Sundays back. As the Censors passed your plans they might mine, though I guess mine will look rather suspicious, to say the least of it. However, I will try. They might resemble houses!
Plan A would do well for a corner house. A lawn and fernery outside the dining & drawing room, and kitchen garden along the west side of the garden.
Cannot stop any longer, so Goodbye. May