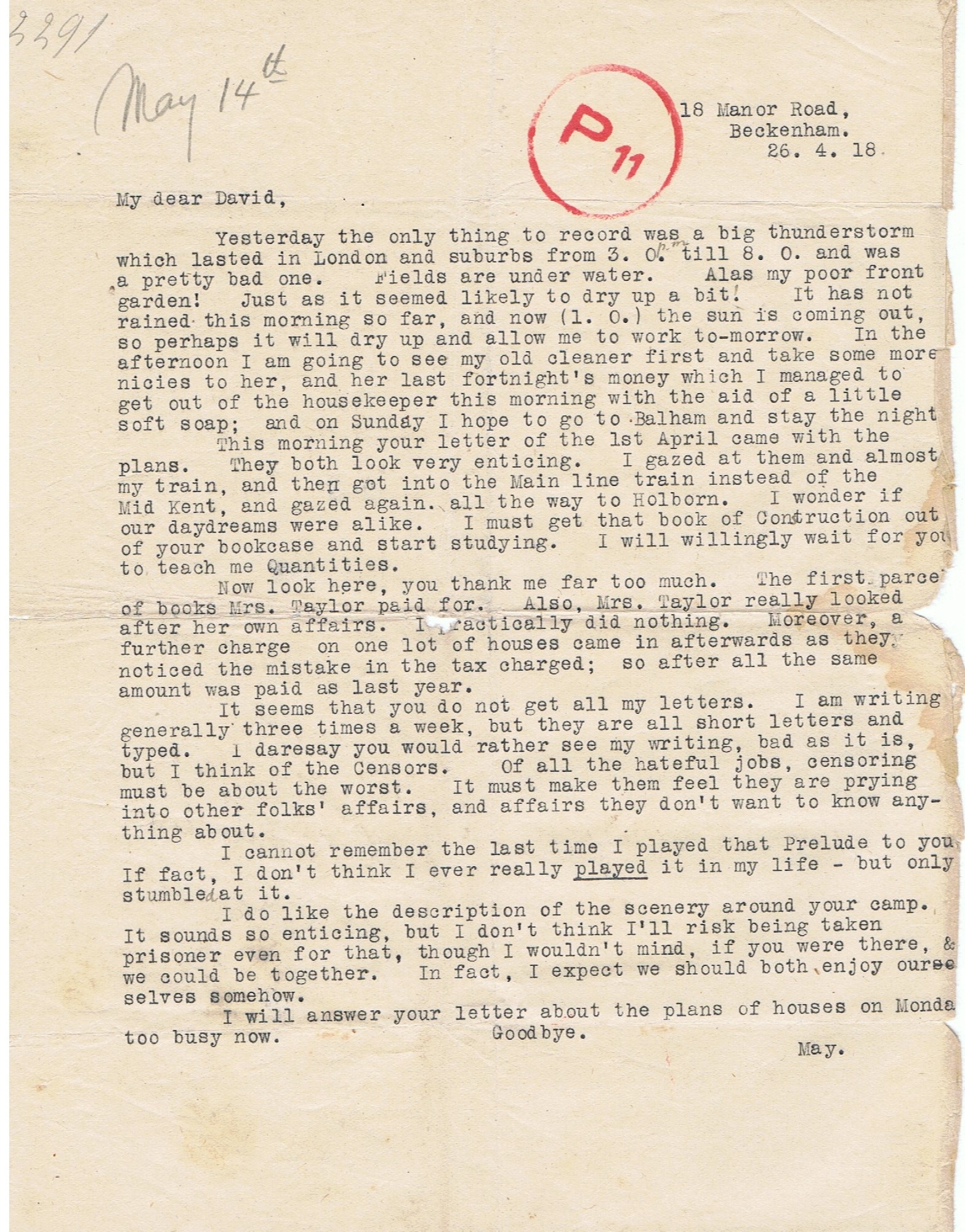 May to David 26.4.18
My dear David,
Yesterday the only thing to record was a big thunderstorm which lasted in London and suburbs from 3.0 till 8.0 and was a pretty bad one. Fields are under water. Alas my poor front garden! Just as it seemed likely to dry up a bit! It has not rained this morning so far, and now (1.0) the sun is coming out, so perhaps it will dry up and allow me to work tomorrow. In the afternoon I am going to see my old cleaner first and take some more nicies to her, and her last fortnight’s money which I managed to get out of the housekeeper this morning with the aid of a little soft soap; and on Sunday I hope to go to Balham and stay the night.
This morning your letter of the 1st April came with the plans. They both look very enticing. I gazed at them and almost my train, and then got into the Main line train instead of the Mid Kent, and gazed again, all the way to Holborn. I wonder if our daydreams were alike. I must get that book of Construction out of your bookcase and start studying. I will willingly wait for you to teach me Quantities.
Now look here, you thank me far too much. The first parcel of books Mrs Taylor paid for. Also, Mrs Taylor really looked after her own affairs. I practically did nothing. Moreover, a further charge on one lot of houses came in afterwards as they noticed the mistake in the tax charged; so after all the same amount was paid last year.
It seems that you did not get all my letters. I am writing generally three times a week, but they are all short letters and typed. I daresay you would rather see my writing, bad as it is, but I think of the Censors. Of all the hateful jobs, censoring must be about the worst. It must make them feel they are prying into other folks’ affairs, and affairs they don’t want to know anything about.
I cannot remember the last time I played that Prelude to you. In fact, I don’t think I ever really played it in my life – but only stumbled at it.
I do like the description of the scenery around your camp. It sounds enticing but I don’t think I’ll risk being taken prisoner even for that, though I wouldn’t mind, if you were there, & we could be together. In fact, I expect we should both enjoy ourselves somehow.
I will answer your letter about the plans of houses on Monday, too busy now.
Goodbye.
May