29th April 1917 No parades, no nothing except football

29th April 1917 No parades, no nothing except football 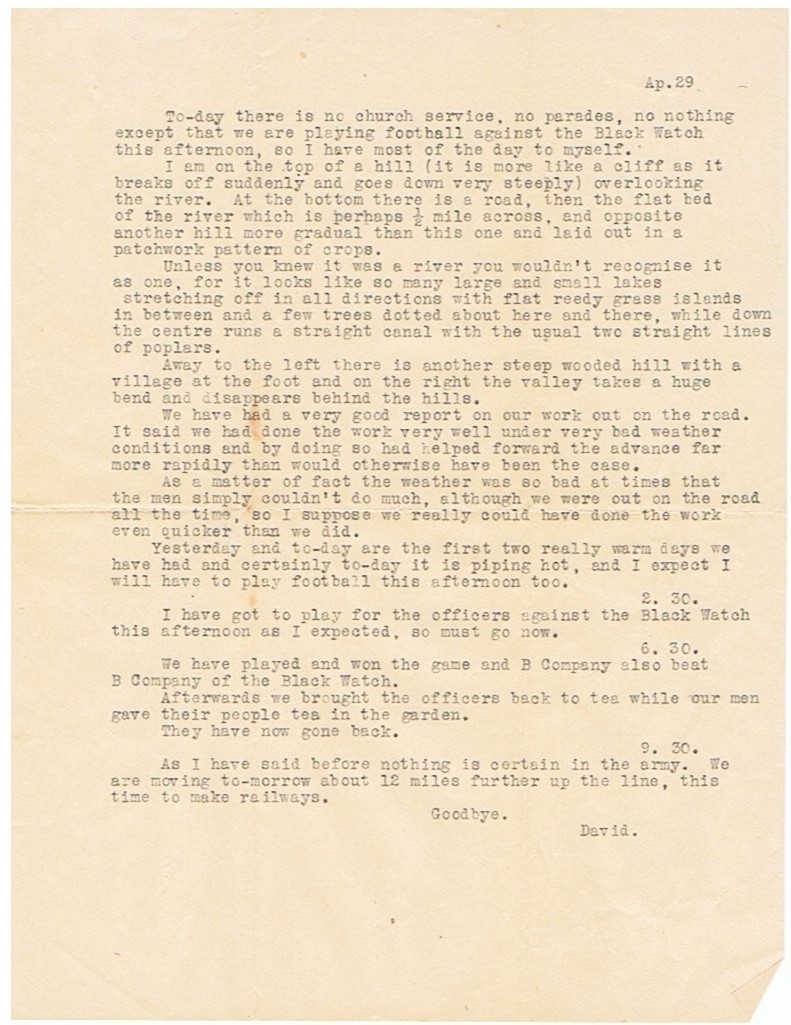 To-day there is no church service, no parades, no nothing except that we are playing football against the Black Watch this afternoon, so I have most of the day to myself.

I am on the top of a hill (it is more like a cliff as it breaks off suddenly and goes down very steeply) overlooking the river. At the bottom there is a road, then the flat bed of the river which is perhaps 1/2 mile across, and opposite another hill more gradual than this one and laid out in a patchwork pattern of crops.

Unless you knew it was a river you wouldn’t recognize it as one, for it looks like so many large and small lakes stretching off in all directions with flat reedy grass islands in between and a few trees dotted about here and there, while down the centre runs a straight canal with the usual two straight lines of poplars.

Away to the left there is another steep wooded hill with a village at the foot and on the right the valley takes a huge bend and disappears behind the hills.

We have had a very good report on our work out on the road. It said we had done the work very well under very bad weather conditions and by doing so had helped forward the advance far more rapidly than would otherwise have been the case.

As a matter of fact the weather was so bad at times that the men simply couldn’t do much, although we were out on the road all the time, so I suppose we really could have done the work even quicker than we did.

Yesterday and to-day are the first two really warm days we have had and certainly to-day it is piping hot, and I expect I will have to play football this afternoon too.

I have got to play for the officers against the Black Match this afternoon as I expected, so must go now.

We have played and won the game and B Company also beat B Company of the Black Watch.

Afterwards we brought the officers back to tea while our men gave their people tea in the garden.

They have now gone back.

As I have said before nothing is certain in the army. We are moving to-morrow about 12 miles further up the line, this time to make railways.