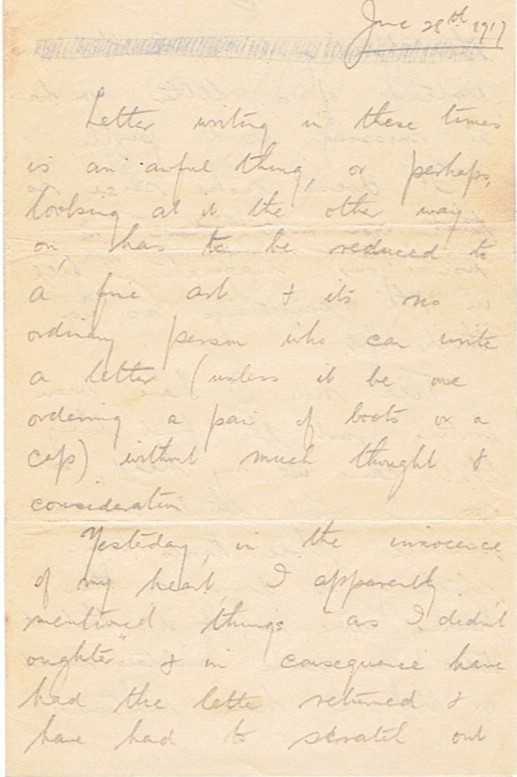 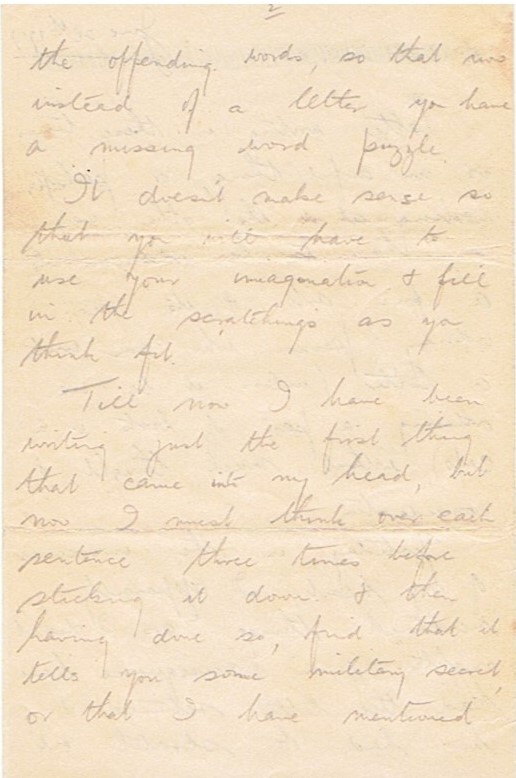 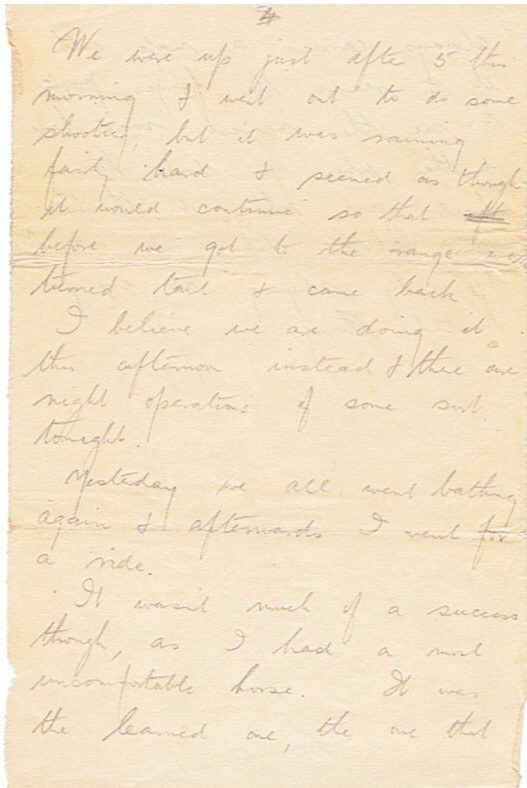 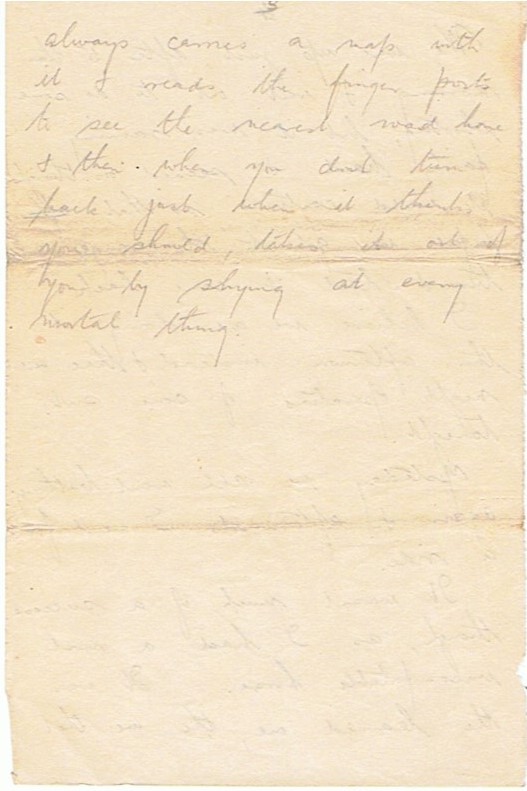 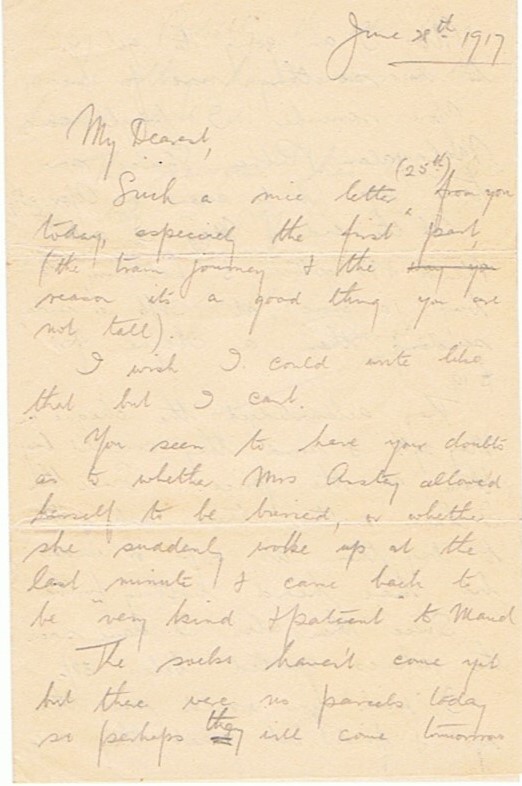 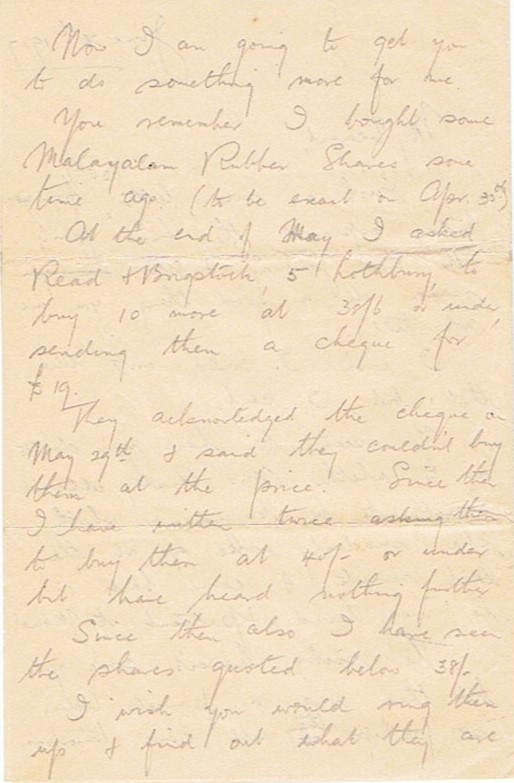 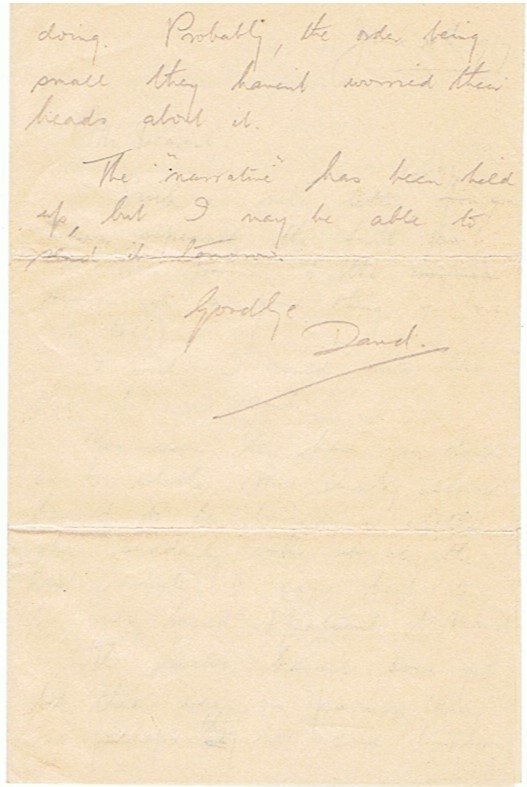 Letter writing in these times is an awful thing, or perhaps, looking at it the other way on, has to be reduced to a fine art and its no ordinary person who can write a letter (unless it be one ordering a pair of boots or a cap) without much thought and consideration.

Yesterday, in the innocence of my heart I apparently mentioned things as I didn’t oughter and in consequence have had the letter returned and have had to scratch out the offending words, so that now instead of a letter you have a missing word puzzle.

It doesn’t make sense so that you will have to use your imagination and fill in the scratchings as you think fit.

Till now I have been writing just the first thing that came into my head, but now I must think over each sentence three times before sticking it down and then having done so, find that it tells you some military secret, or that I have mentioned    [censored]   course I shouldn’t like others to read, and so have to tear the whole thing up and start all over again.

It’s an awful strain – no wonder I am going grey.

We were up just after 5 this morning and went out to do some shooting but it was raining fairly hard and seemed as though it would continue so that before we got to the range we turned tail and came back.

I believe we are doing it this afternoon instead and there are night operations of some sort tonight.

Yesterday we all went bathing again and afterwards I went for a ride. It wasn’t much of a success though, as I had a most uncomfortable horse. It was the learned one, the one that always carries a map with it and reads the finger posts to see the nearest road home and then when you don’t turn back just when it thinks you should, takes it out of you by shying at every mortal thing.

Such a nice letter (25th) from you today, especially the first part, (the train journey and the reason it’s a good thing you are not tall).

I wish I could write like that but I can’t.

You seem to have your doubts as to whether Mrs. Anstey allowed herself to be buried, or whether she suddenly woke up at the last minute and came back to be “very kind and patient” to Maud.

The socks haven’t come yet but there were no parcels today so perhaps they will come tomorrow.

Now I am going to get you to do something more for me.

You remember I bought some Malayalam Rubber Shares some time ago (to be exact on April 30th). At the end of May I asked Read & Brigstock, 5 Lothbury, to buy 10 more at 38/6 or under, sending them a cheque for £19. They acknowledged the cheque on May 29th and said they couldn’t buy them at the price. Since then I have written twice asking them to buy them at 40/- or under but have heard nothing further.

Since then also I have seen the shares quoted below 38/-. I wish you would ring them up and find out what they are doing. Probably, the order being small they haven’t worried their heads about it.

The “narrative” has been held up, but I may be able to send it tomorrow.