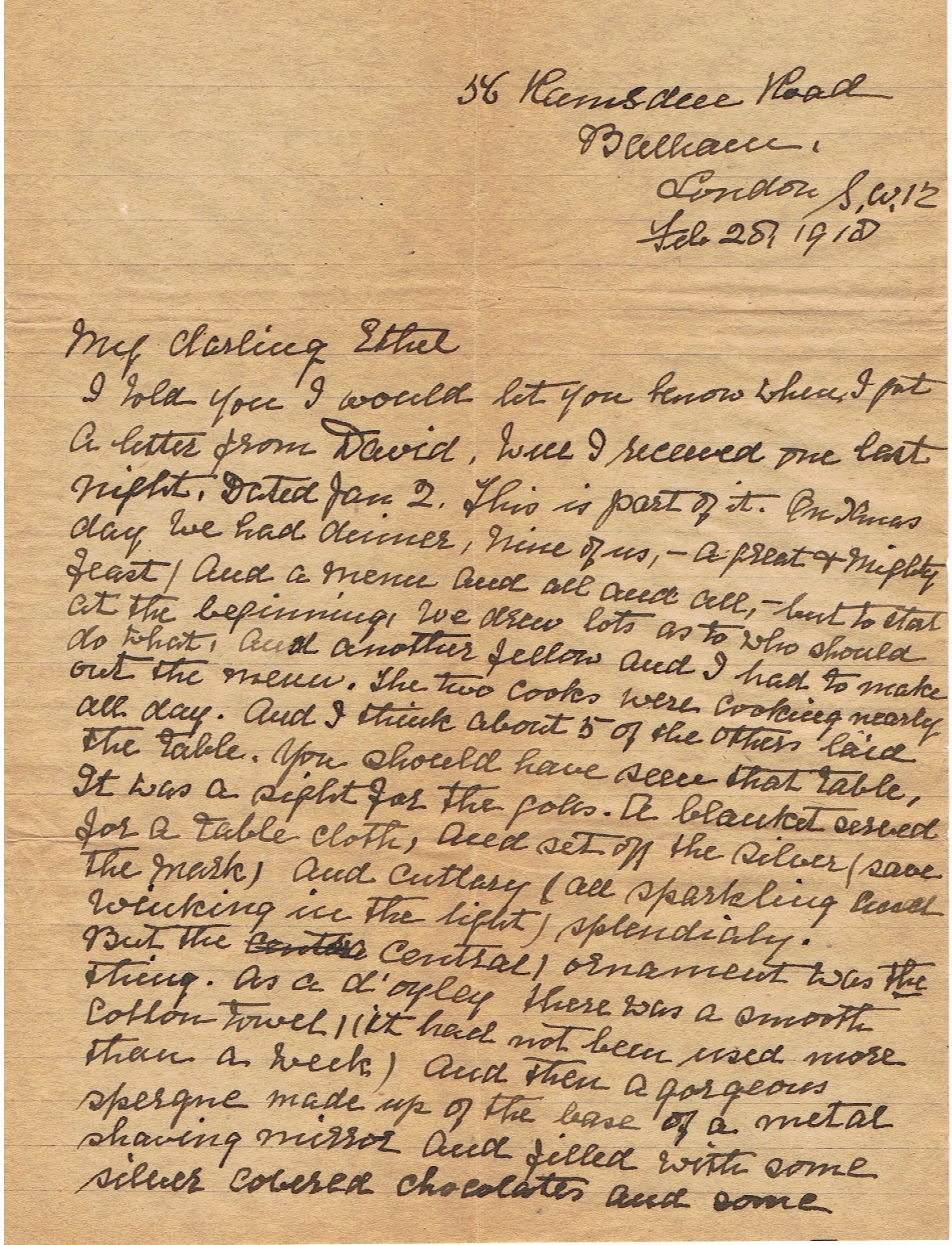 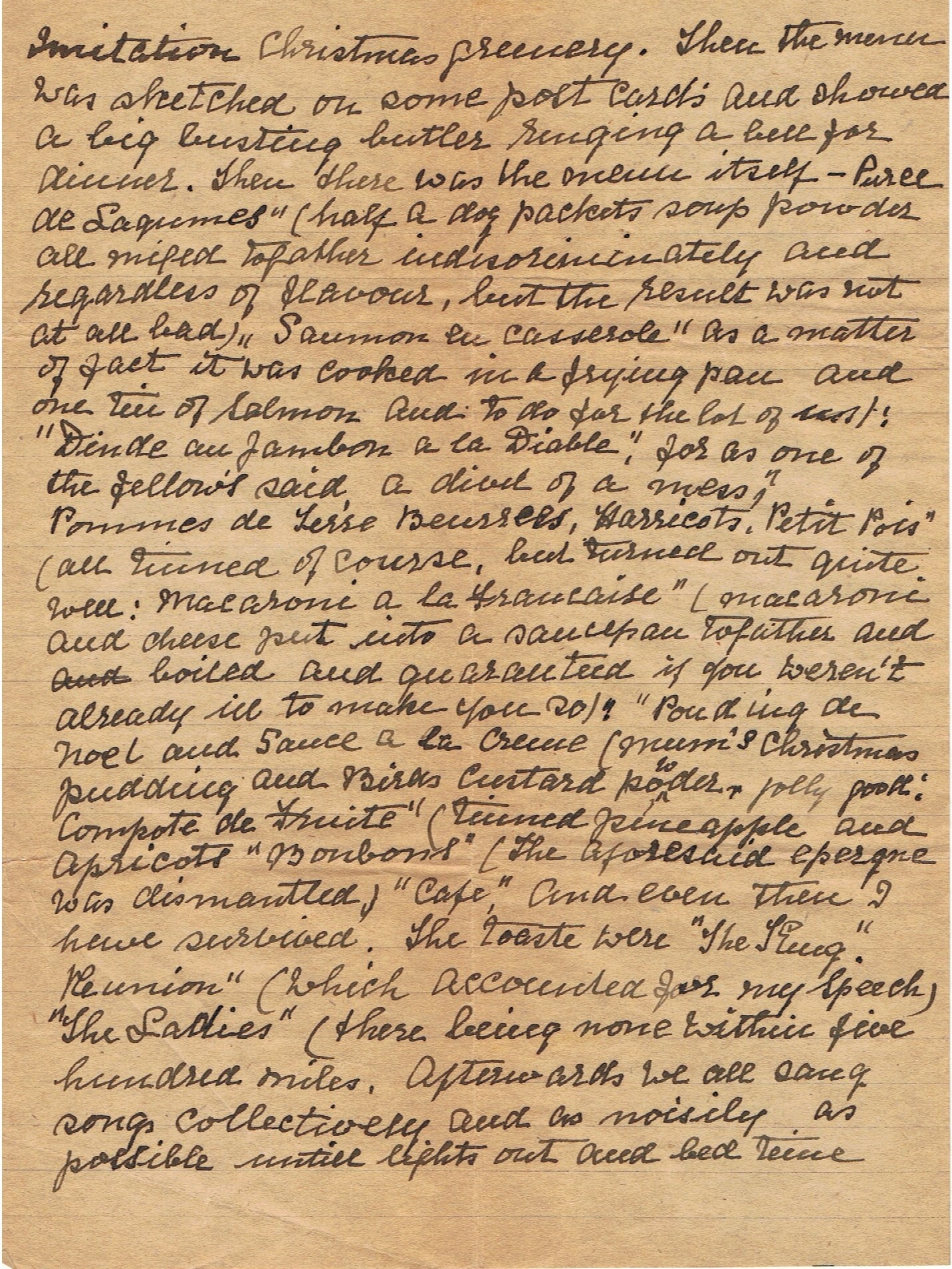 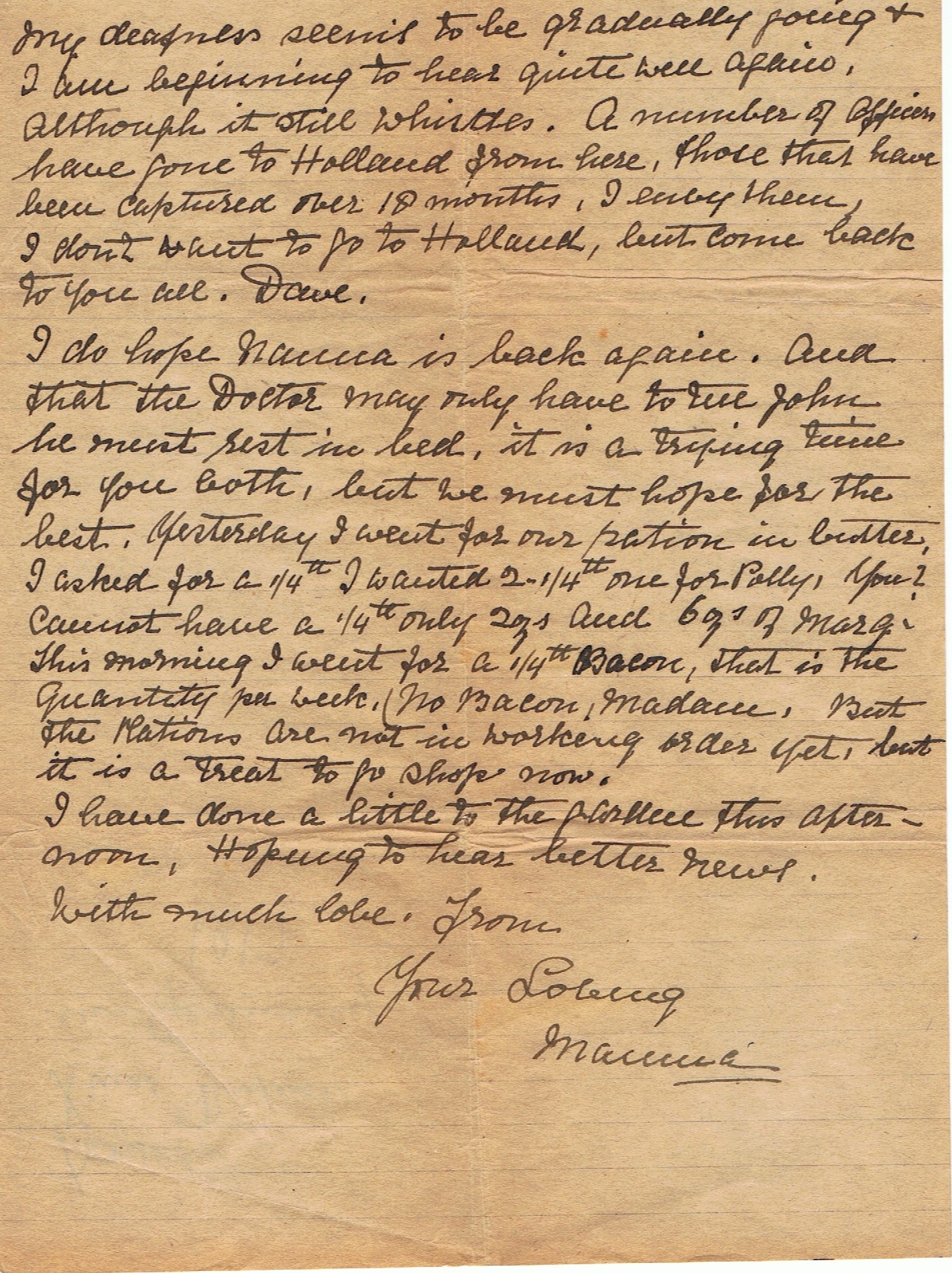 My darling Ethel,
I told you I would let you know when I got a letter from David. Well I received one last night dated Jan 2. This is part of it.
“On Xmas day we had dinner, nine of us, – a great and mighty feast. And a menu and all and all, – but to start at the beginning. We drew lots as to who should do what, and another fellow and I had to make out the menu. The two cooks were cooking nearly all day. And I think about 5 of the others laid the table. You should have seen that table, It was a sight for the gods. A blanket served for a table cloth, and set off the silver (save the mark) and cutlery (all sparkling and winking in the light) splendidly.
But the central ornament was the thing. As a d’oyley there was a smooth cotton towel (it had not been used more than a week) and then a gorgeous spergne made up of the base of a metal shaving mirror and filled with some silver covered chocolates and some imitation Christmas greenery. Then the menu was sketched on some post cards and showed a big busting butler ringing a bell for dinner. Then there was the menu itself – ‘Puree de legumes’ (half a doz packets soup powder all mixed together indiscriminately and regardless of flavour, but the result was now at all bad), ‘Saumon en Casserole’ as a matter of fact it was cooked in a frying pan and one tin of salmon and to do for the lot of us; ‘Dinde au Jambon a la Diable’, for as one of the fellows said, a divil of a mess; ‘Pommes de Terr Beurrees, Harricots, Petit Pois’ (all tinned of course, but turned out quite well); ‘Macaroni a la Francaise’ (macaroni and cheese put into a saucepan together and boiled and guaranteed if you weren’t already ill to make you so; ‘Pouding de Noel and Sauce a la Creme’ (Mum’s Christmas pudding and Birds Custard powder, jolly good; ‘Compote de Fruite’ (tinned pineapple and apricots); ‘Bonbons’ (the aforesaid espergne was dismantled); ‘cafe’, and even then I have survived. The toasts were ‘The King’, ‘Reunion’ (which accounted for my speech) ‘The Ladies’ (there being none within five hundred miles). Afterwards we all sang songs collectively and as noisily as possible until lights out and bed time.
My deafness seems to be gradually going and I am beginning to hear quite well again, although it still whistles. A number of Officers have gone to Holland from here, those that have been captured over 18 months. I envy them, I don’t want to go to Holland, but come back to you all. Dave”
I do hope Nanna is back again. And that the Doctor may only have to tell John he must rest in bed, it is a trying time for you both, but we must hope for the best. Yesterday I went for our ration in butter, I asked for ¼ lb. I wanted 2 – ¼ lb for Polly. You cannot have a ¼ lb only 2 oz and 6 oz of marg. This morning I went for a ¼ bacon, that is the quantity per week (no bacon Madam, but the rations are not in working order yet, but it is a treat to go shop now.
I have done a little of the garden this afternoon. Hoping to hear better news.
With much love
From Your Loving Mamma