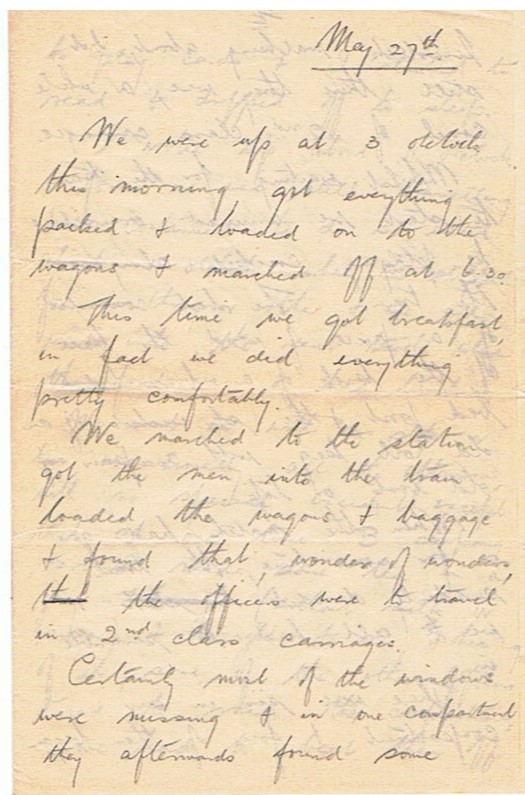 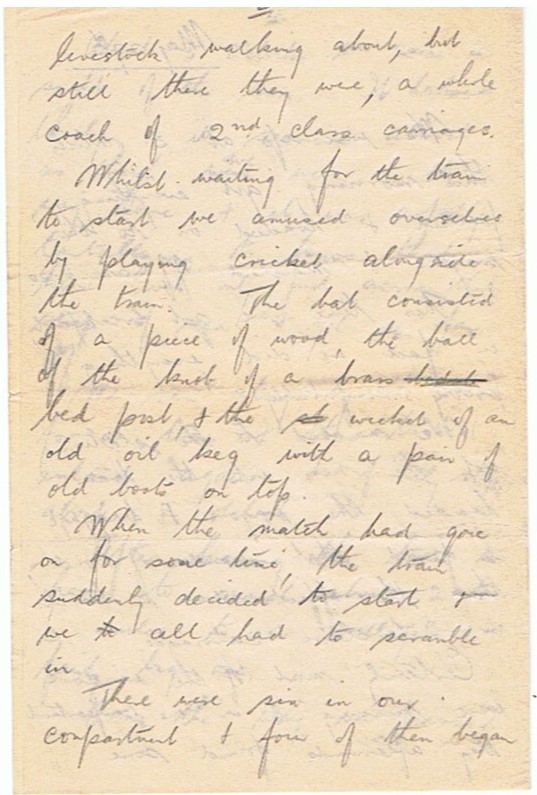 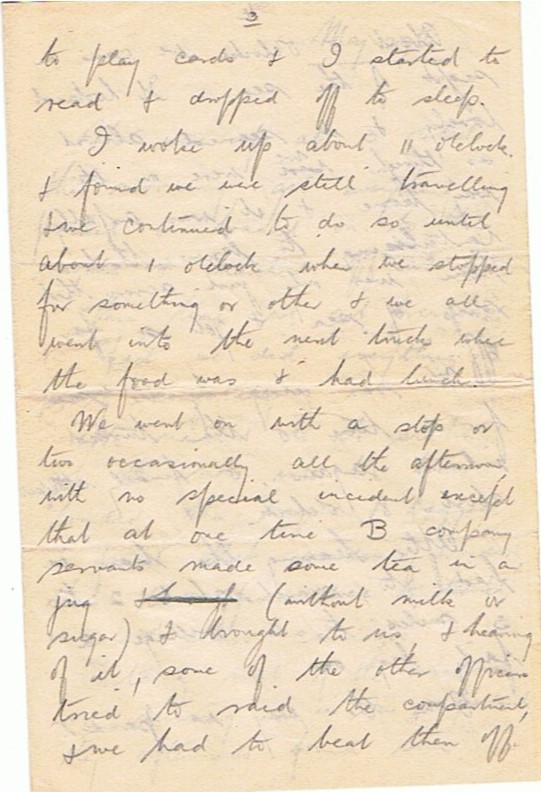 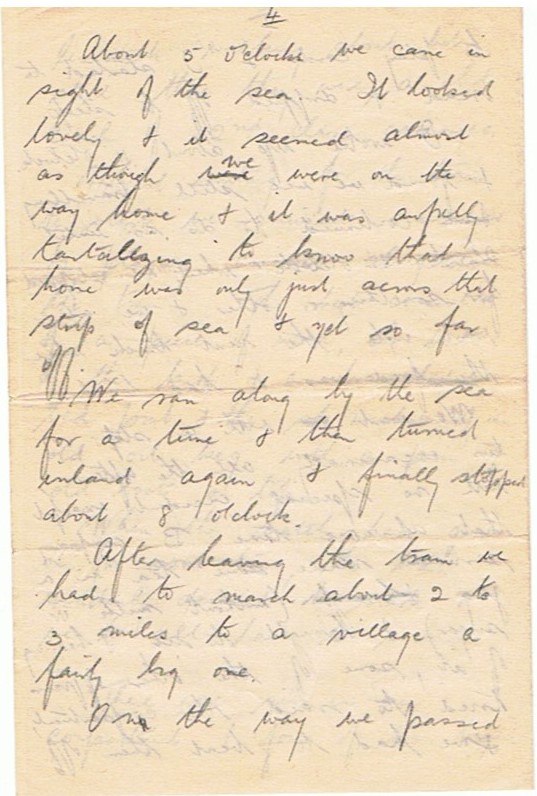 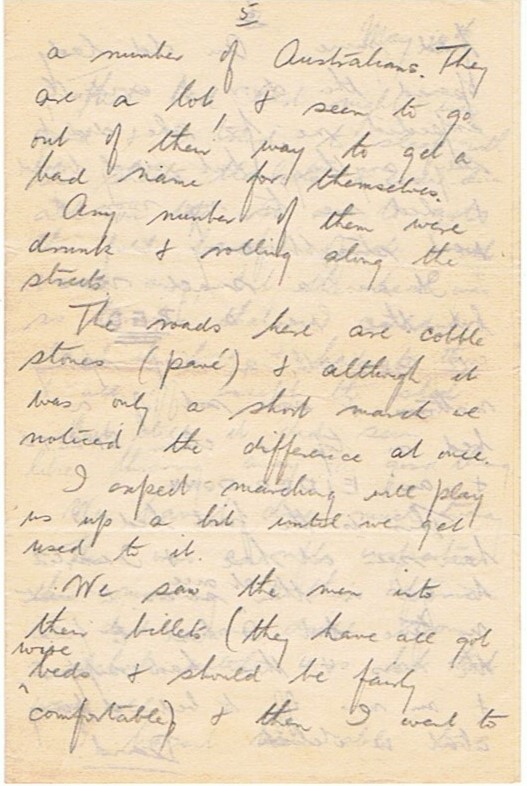 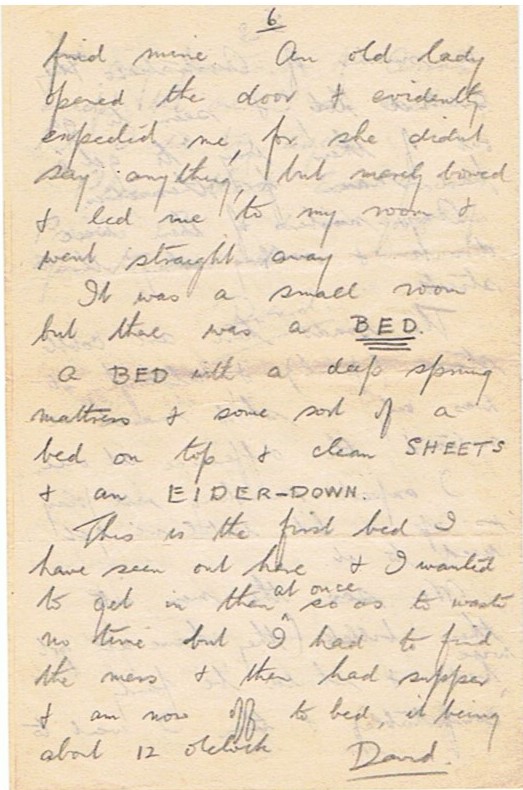 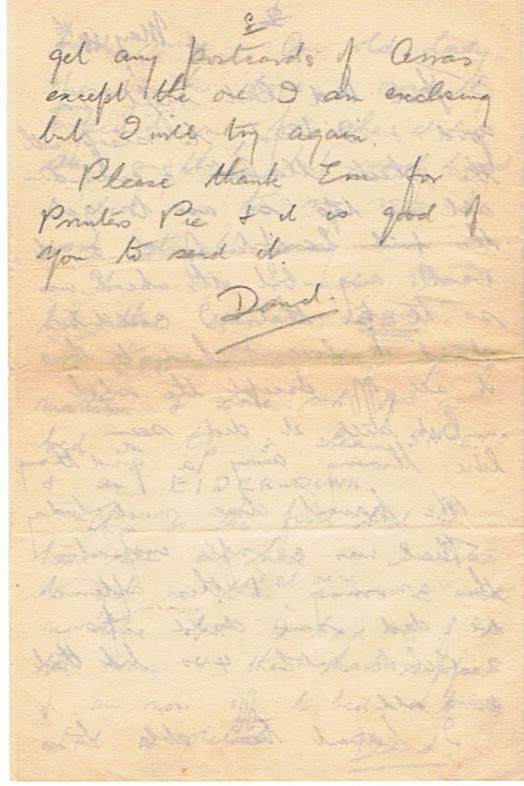 We were up at 3 o’clock this morning, got everything packed and loaded on to the wagons and marched off at 6.30.

This time we got breakfast, in fact we did everything pretty comfortably.

We marched to the station got the men into the train, loaded the wagons and baggage and found that, wonder of wonders, the officers were to travel in 2nd class carriages.

Certainly most of the windows were missing and in one compartment they afterwards found some livestock walking about, but still there they were, a whole coach of 2nd class carriages.

Whilst waiting for the train to start we amused ourselves by playing cricket alongside the train. The bat consisted of a piece of wood, the ball of the knob of a brass bed post and the wicket of an old oil keg with a pair of old boots on top.

When the match had gone on some time, the train suddenly decided to start and we all had to scramble in.

There were six in our compartment and four of them began to play cards and I started to read and dropped off to sleep.

I woke up about 11 o’clock and found we were still travelling and we continued to do so until about I o’clock when we stopped for something or other and we all went into the next truck where the food was and had lunch.

We went on with a stop or two occasionally all the afternoon with no special incident except that at one time B company servants made some tea in a jug (without milk or sugar) and brought to us and hearing of it, some of the other officers tried to raid the compartment, and we had to beat them off.

About 5 o’clock we came in sight of the sea. It looked lovely and it seemed almost as though we were on the way home and it was awfully tantalizing to know that home was only just across that strip of sea and yet so far off.

We ran along by the sea for a time and then turned inland again and finally stopped about 8o’clock.

After leaving the train we had to march about 2 to 3 miles to a village – a fairly big one.

On the way we passed a number of Australians. They are a lot and seem to go out of their way to get a bad name for themselves.

Any number of them were drunk and rolling along the streets.

The roads here are cobble stones (pave) and although it was only a short march we noticed the difference at once.

I expect marching will play us up a bit until we get used to it.

We saw the men into their billets (they have all got wire beds and should be fairly comfortable) and then I went to find mine.

An old lady opened the door and evidently expected me, for she didn’t say anything, but merely bowed and led me to my room and went straight away.

It was a small room but there was a BED. A BED with a deep spring mattress and some sort of a bed on top and clean SHEETS and an EIDER-DOWN.

This is the first bed I have seen out here and I wanted to get in then at once so as to waste no time but I had to find the mess and, then had supper and am now off to bed, it being about 12 o’clock.

That bed last night was good and I tried to sleep with the sheets, blankets and eider-down all on top so as to get the full benefit of it and not waste any, but the heat was so terrible that I couldn’t stand it long and had to throw it all off except the sheet.

But still it did seem like throwing away a good thing.

We haven’t done much today. There was a rifle inspection this morning and this afternoon we did some drill from 2 o’clock until 4.20 but that was all.

I haven’t been able to get any postcards of Arras except the one I am enclosing but I will try again.

Please thank Em for Printers Pie and it is good of you to send it.