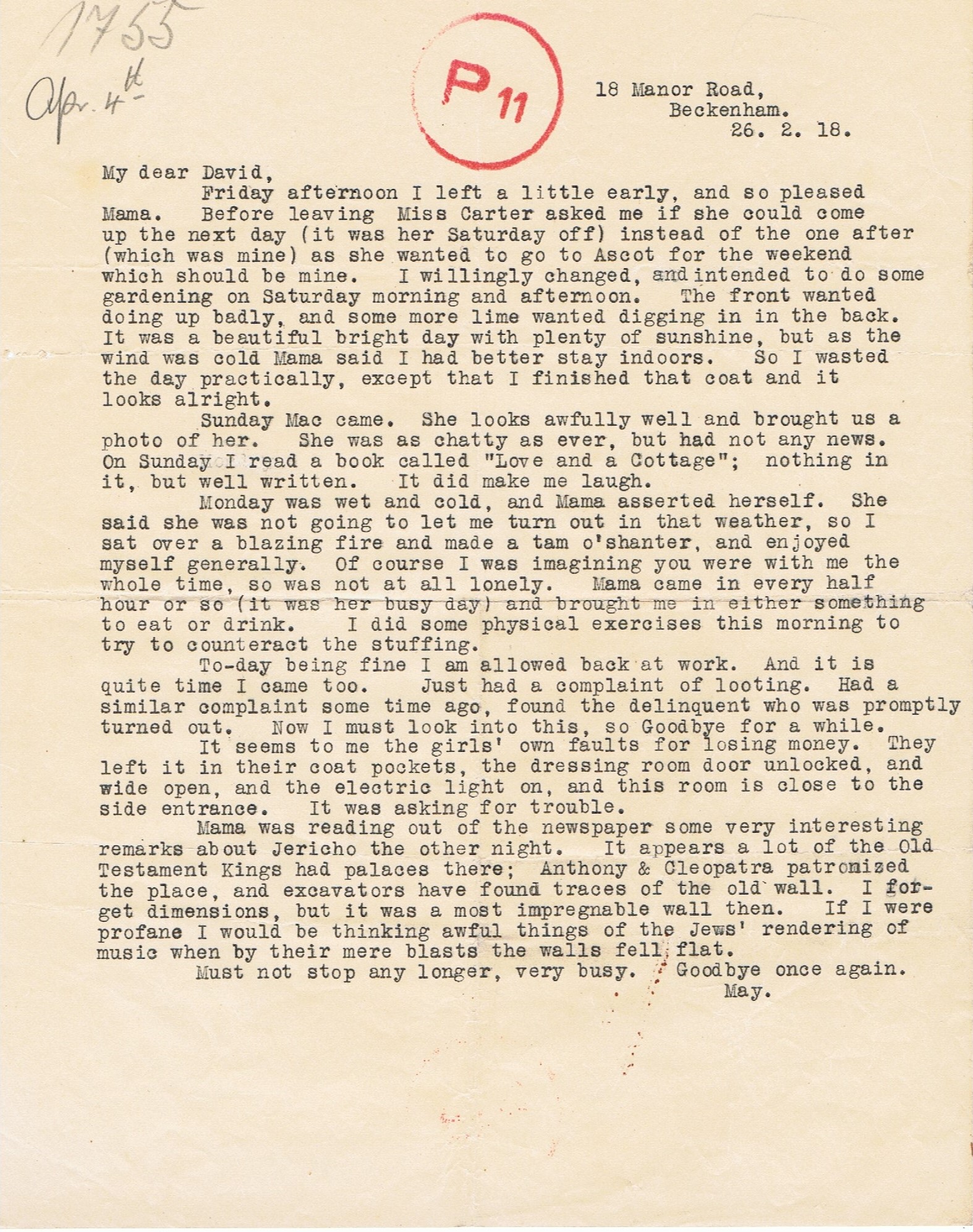 May to David Beckenham. 26. 2. 18.
My dear David,
Friday afternoon I left a little early, and so pleased Mama. Before leaving Miss Carter asked me if she could come up the next day (it was her Saturday off) instead of the one after (which was mine) as she wanted to go to Ascot for the weekend which should be mine. I willingly changed, and intended to do some gardening on Saturday morning and afternoon. The front wanted doing up badly, and some more lime wanted digging in in the back. It was a beautiful bright day with plenty of sunshine but as the wind was cold Mama said I had better stay indoors. So I wasted the day practically, except that I finished that coat and it looks alright.
Sunday Mac came. She looks awfully well and brought us a photo of her. She was as chatty as ever, but had not any news. On Sunday I read a book called “Love and a Cottage”; nothing in it, but well written. It did make me laugh.
Monday was wet and cold, and Mama asserted herself. She said she was not going to let me turn out in that weather, so I sat over a blazing fire and made a tam o’shanter, and enjoyed myself generally. Of course I was imagining you were with me the whole time, so was not at all lonely. Mama came in every half hour or so (it was her busy day) and brought me in either something to eat or drink. I did some physical exercises this morning to try to counteract the stuffing.
To-day being fine I am allowed back at work. And it is quite time I came too. Just had a complaint of looting. Had a similar complaint some time ago, found the delinquent who was promptly turned out. Now I must look into this, so Goodbye for a while.
It seems to me the girls’ own faults for losing money. They left it in their coat pockets, the dressing room door unlocked, and wide open, and the electric light on, and this room is close to the side entrance. It was asking for trouble.
Mama was reading out of the newspaper some very interesting remarks about Jericho the other night. It appears a lot of the Old Testament Kings had palaces there; Anthony & Cleopatra patronised the place, and excavators have found traces of the old wall. I forget dimensions, but it was a most impregnable wall then.: If I were profane I would be thinking awful things of the Jews’ rendering of music when by their mere blasts the walls fell flat.
Must not stop any longer, very busy. Goodbye once again.
May.